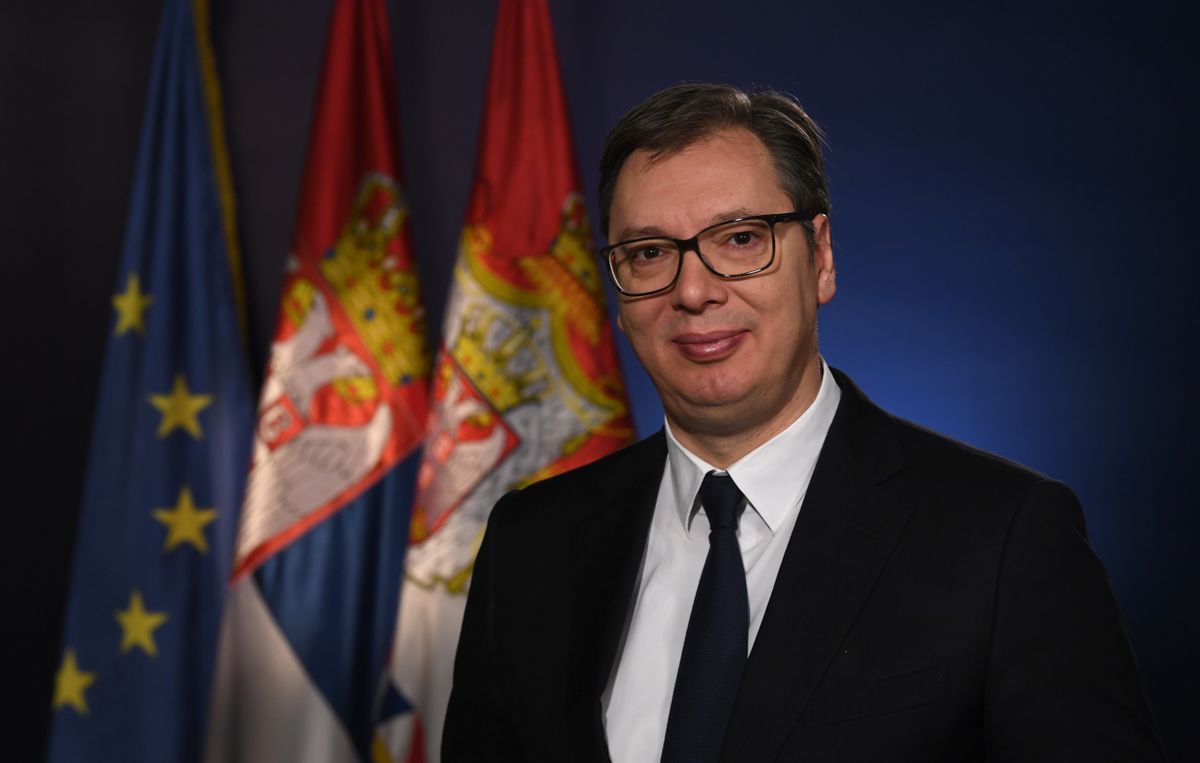 Official photo of the President of the Republic of Serbia Aleksandar Vučić/ Photo Presidency: Dimitrije Goll

Aleksandar Vučić
President of the Republic of Serbia
He was born on March 5, 1970, in Belgrade. In 1988 he graduated from “Zemunska gimnazija”, and from the Faculty of Law, University of Belgrade, in 1994.
He joined the Serbian Radical Party in 1993. The same year he was elected an MP into the National Assembly of the Republic of Serbia in 1993, and he was elected the Secretary General of the Serbian Radical party in 1994. He stayed in that position until 2008.
He became the Director of the “Pinki” business and sport center in Zemun, in 1996. He managed to reconstruct these neglected sports facilities, and with successful operation he multiplied the incomes of the employees.
He was appointed the Minister of Information in 1998, by the Government of National Unity.
MP in the Federal Assembly of the SRY, in three terms of office: Council of the Republic as of February 1998 and as of May 2000 and on September 24, 2000 he was elected in federal elections.
In Belgrade mayoral elections, “Vučić for Metropolis” he won 29% of the votes in the first round, i.e. 48% of the votes in the second round. In Belgrade mayoral elections, held in May 2008, he won 316.357 votes, i.e. 34, 7%.
Together with Tomislav Nikolić, he founded the Serbian Progressive Party, and at the Founding Convention in October 2008, he was elected Party’s Deputy President.
After general parliamentary elections, held in 2012, he was appointed the Minister of Defense and the First Deputy Prime Minister, in charge of fight against crime and corruption.
After Tomislav Nikolić had resigned from the position of the President of the Serbian Progressive Party, after Presidential elections in 2012 he became an acting leader of the Serbian Progressive Party, on 24 May 2012. At the Second Party Congress, held on 29 September 2012, he was unanimously elected for the President of the Serbian Progressive Party.
He performed the duty of the Defense Minister from July 28, 2012, until the reshuffle of the Government of the Republic of Serbia, on September 2, 2013.
He has been participating actively in negotiations between the Government of the Republic of Serbia and Provisional Institutions of Self-Government in Pristina, under the auspices of the European Union. He made a contribution to the signing of the Brussels Agreement in April 2013, whereby, for the first time since 1999, the realistic basis has been created for Serbian people living in Kosovo and Metohija to establish institutions that would be recognized by the international community.
As of September 2013, he kept only the position of the First Deputy Prime Minister, in charge of fighting crime and corruption.
After the Serbian Progressive Party’s victory in the elections held on 16 March 2014, he was elected for the Prime Minister of Serbia, in the Government formed on 27 April 2014. He held that position until August 2016, when, after the elections held on 24 April 2016, he began a new term as the Prime Minister of Serbia.
The Government that was lead by Aleksandar Vucic reached a historical success by implementing the most difficult economic reforms in modern Serbian history. By temporarily cutting pensions and salaries in public sector he saved Serbia from bankruptcy, recovered the budget and started to decrease Serbia's public debt.
After the victory in the Presidential elections on 2 April 2017, he was appointed for the President of the Republic of Serbia.
He sees Serbia as an economically reconstructed, organized, modern European country; regional leader in economy, politics, infrastructure energy, stability of any kind, affirmation of human right and freedoms but also in education, culture, science, enlightenment sports and natality.
He won “Kapetan Miša Anastasijević” award in 2012 for the Personality of the Year, as well as the “Personality of the Year 2013”, by “Nezavisne novine”, Bosnia and Herzegovina.
Additionally, he won the following awards as well: “Man of the Year 2013”, by the European magazine “The Man”; “The most European of the Year 2013”, by the international organization “The First European House”; “Vidovdan Award of 2013”, given by the City of Kruševac and “2014 Regional Leader” award by the regional jury and readers of “Večernji list” from Bosnia and Herzegovina.
He is a passionate reader, particularly of literature from the field of historiography and geopolitics, but also Serbian and world literature; he’s the owner of quite a big personal library.
He plays chess, likes to watch football and basketball.
He is fluent in English and Russian, with basic knowledge of French and he is studying German.
Married with Tamara Vucic, father of Danilo, Milica and Vukan
Share