Delegation of the Kingdom of Bahrain visits Serbia

President of the Republic of Serbia Aleksandar Vučić met with Sheikh Nasser bin Hamad bin Isa Al Khalifa, His Majesty the King of Bahrain's representative for humanitarian work, youth issues and national security advisor, who is staying on a two-day visit to Serbia. 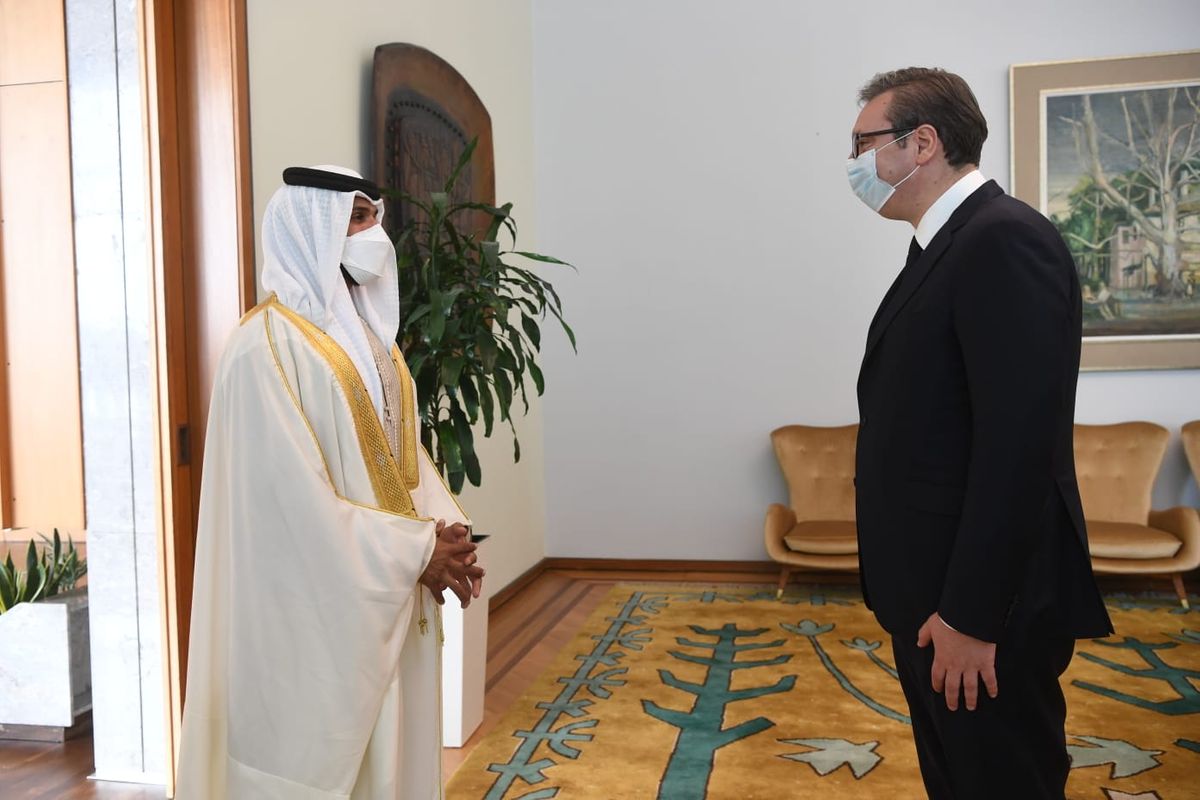 Following the meeting, President Vučić expressed his gratitude that shortly after he visited that country, a decision was made for the Bahraini delegation to visit our country.
"It was already during the first meeting in Manama that we have developed trust in each other on many important issues and on the way sovereign and independent countries are governed, and that continues in Belgrade," said President Vučić, emphasising that we will witness rapid progress in a few years as well as the development of the closest partnership and friendly relations between Serbia and Bahrain.
"Apart from establishing trust and close cooperation, in order to be able to work on the further development of relations, certain acts must be passed. We agreed to go for acts of avoiding double taxation and to sign a comprehensive interstate agreement between Serbia and Bahrain, and thus show that we are committed to cooperation in all areas," the President explained, adding that talks would continue the next day and a business forum would be held. 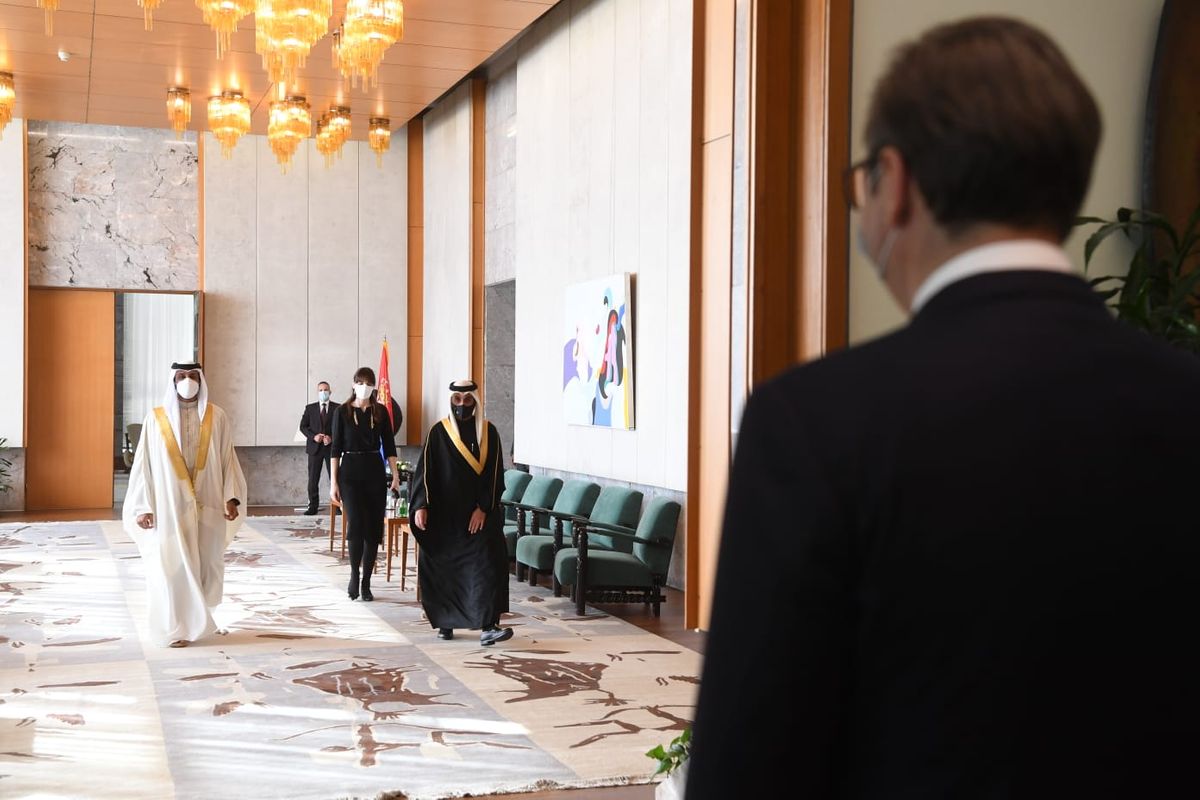 President Vučić said that they would discuss specific projects and the support that the two countries can provide to each other in international organisations and institutions.
"We have to increase the modest numbers of trade and establish real cooperation. We have launched an initiative to launch a joint committee for cooperation that would contribute to the further development of our relations," said President Vučić.
"As far as Serbia is concerned, you will have a sincere friend and a very loyal partner. Someone who will take care not only of his own interests but also of the interests of his friends," said President Vučić asking Sheikh to convey greetings of friendship to King Hamad with assurances that soon he will be able to host him in Serbia. 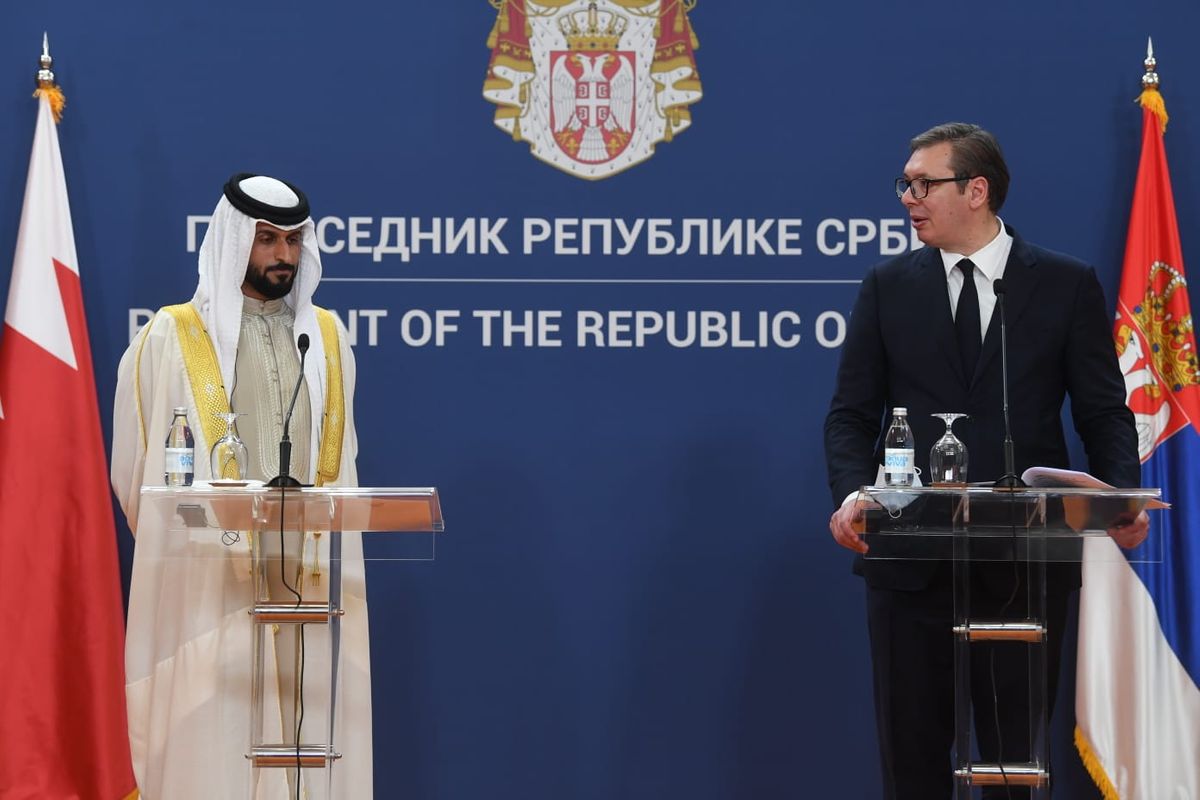 Sheikh Nasser bin Hamad bin Isa Al Khalifa, the representative of His Majesty the King of Bahrain, pointed out that his official visit shows the importance of bilateral ties, as well as the values of the partnership between the two countries.
"The growing partnership will hopefully be strengthened through diplomatic, economic and strategic ties between the two countries," the Sheikh said in a joint address, noting that he was honoured to be entrusted with leading his kingdom's high-level delegation as King Bahrain's representative only a month after the historic and promising visit of President Vučić to his country.
He conveyed the greetings and best wishes of the King of Bahrain, as well as the heir to the throne, Prince Salman. 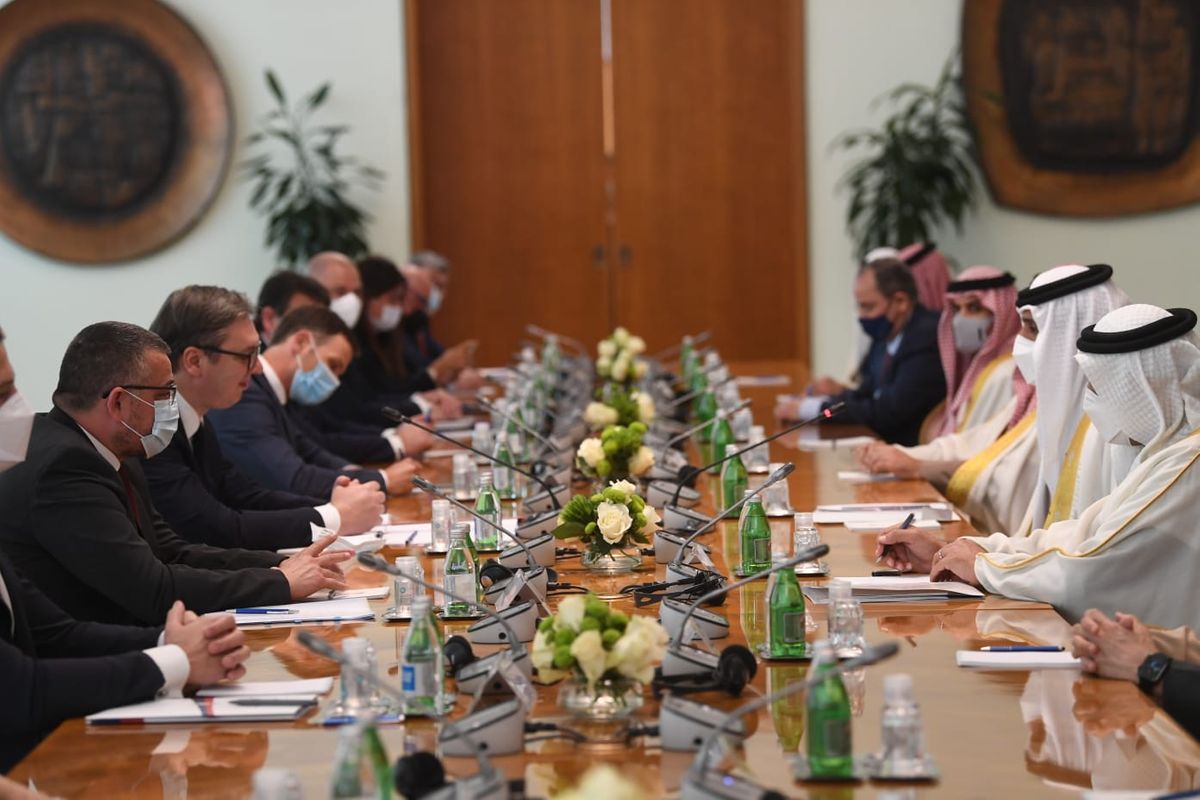 "During your recent visit to Bahrain, the King of Bahrain ordered the opening of a royal embassy in Belgrade, which was well received and responded to by your government," the Sheikh said, adding that opening official channels of communication was an important step to alleviate, improve and strengthen the cooperation.
He added that he was staying in Belgrade accompanied by high representatives of economic and strategic institutions of Bahrain, to agree on concrete steps in the realisation of the joint visions of the leaders of the two countries.
"Thank you for the kind invitation and cordial hospitality," said Sheikh Nasser bin Hamad bin Isa Al Khalifa, and expressed satisfaction that he will get to know the beauties and magnificent history of Belgrade and its cordial people. 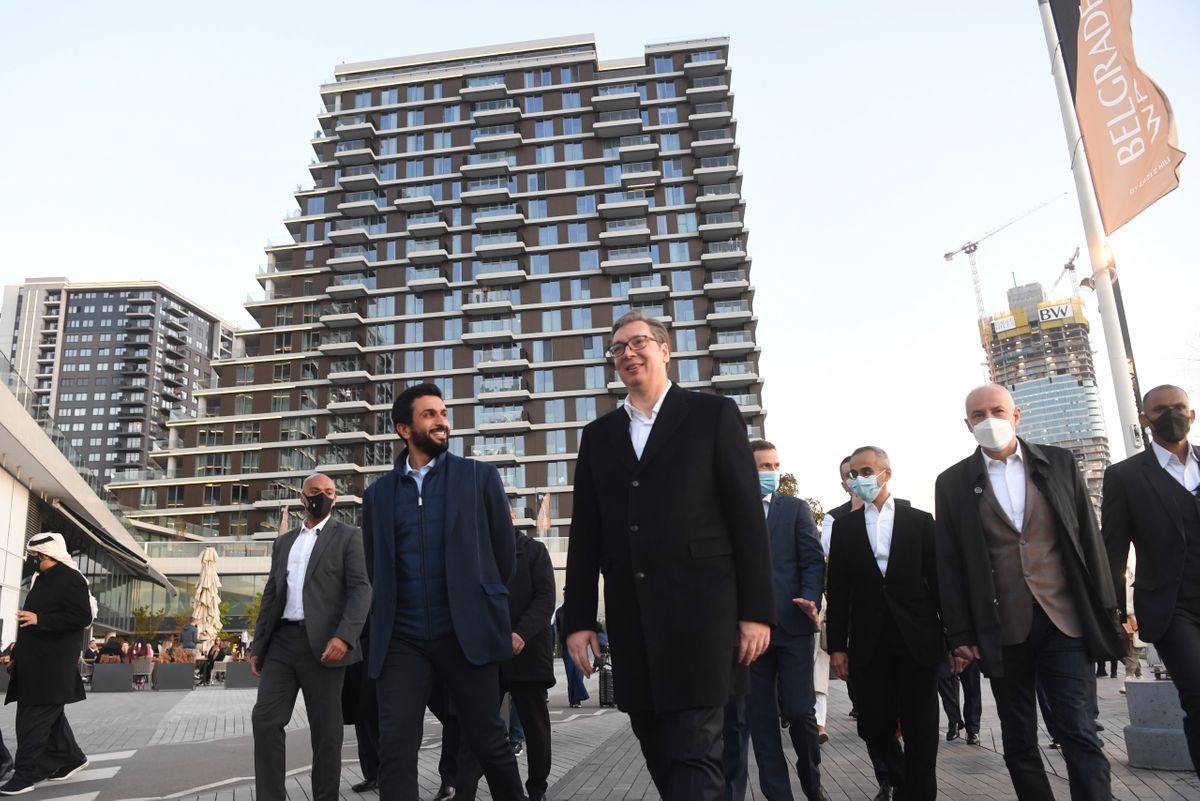 On the second day of the visit, a demonstration of weapons, military equipment and capabilities of part of Serbian Army units was held at the "Colonel Milenko Pavlović" Military Airport in Batajnica, attended by President Vučić and Sheikh Nasser bin Hamad bin Isa Al Khalifa, the representative of the King of Bahrain.
Part of the Serbian Army units from the Air Force and Air Defence, the 72nd Special Operations Brigade and the 63rd Parachute Brigade took part in the presentation. 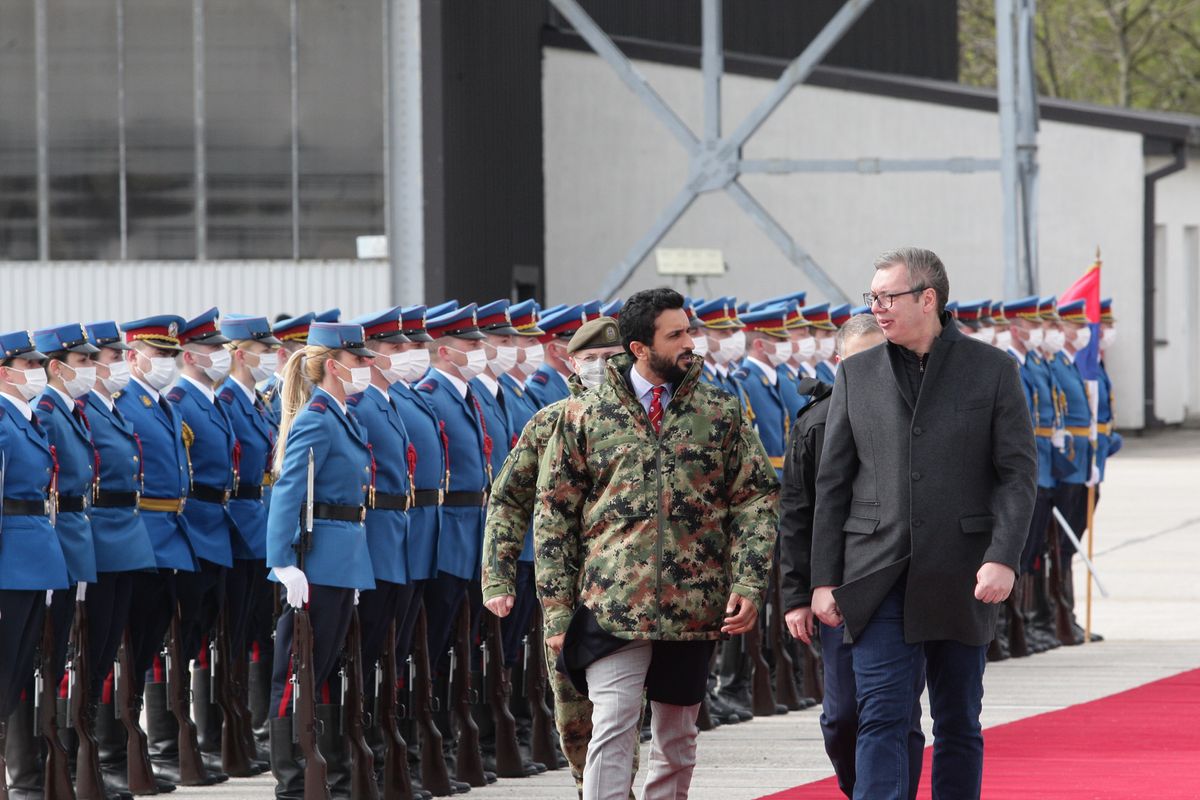