Following the meeting with the High Representative of the European Union for Foreign Affairs and Security Policy Josep Borrell, President of the Republic of Serbia Aleksandar Vučić said today that they had good, honest and open talks on all important topics. 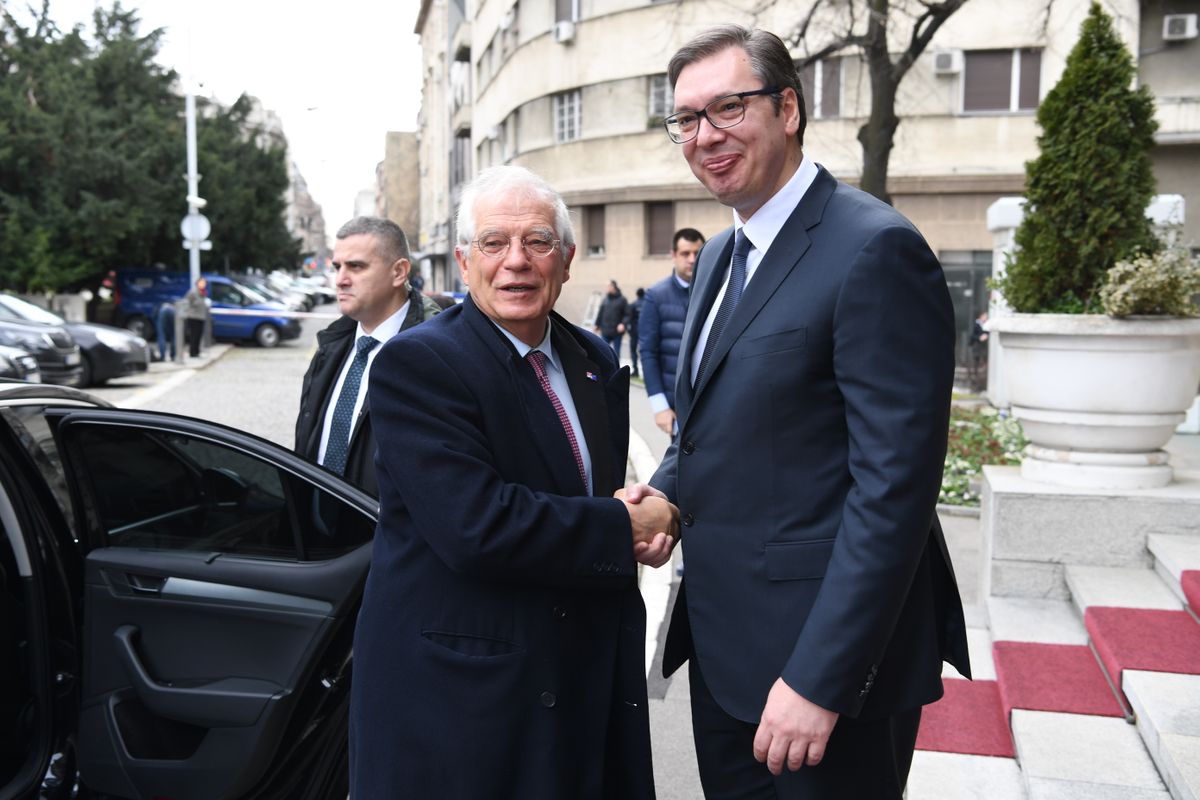 President Vučić thanked Borrell for his personal engagement in the dialogue with Priština and stressed that people should not expect good and pleasant news because there are none, and added that Borrell iterated what the EU had said numerous times - that without a solution in the dialogue with Priština, Serbia's European perspective will surely not be certain.
He added that people need to know that and that is why we must work towards a compromise solution and stressed that we are ready to sit at the table immediately after the abolition of taxes to discuss all the vital issues in relations between Belgrade and Priština.
The President said he presented to Borrell all that Serbia had done and that today it was exactly 2,480 days since the Association of Serbian Municipalities (ASM) was formed, which was the key issue and the basis for the Brussels Agreement drafting, and that no one cared about it, while Serbia had met all of its obligations.
He stressed that he did not say that because someone should be punished and Serbia should take precedence, but because we need what Borrell insisted on - and that is the position of a credible and reliable partner like the EU in solving this problem. 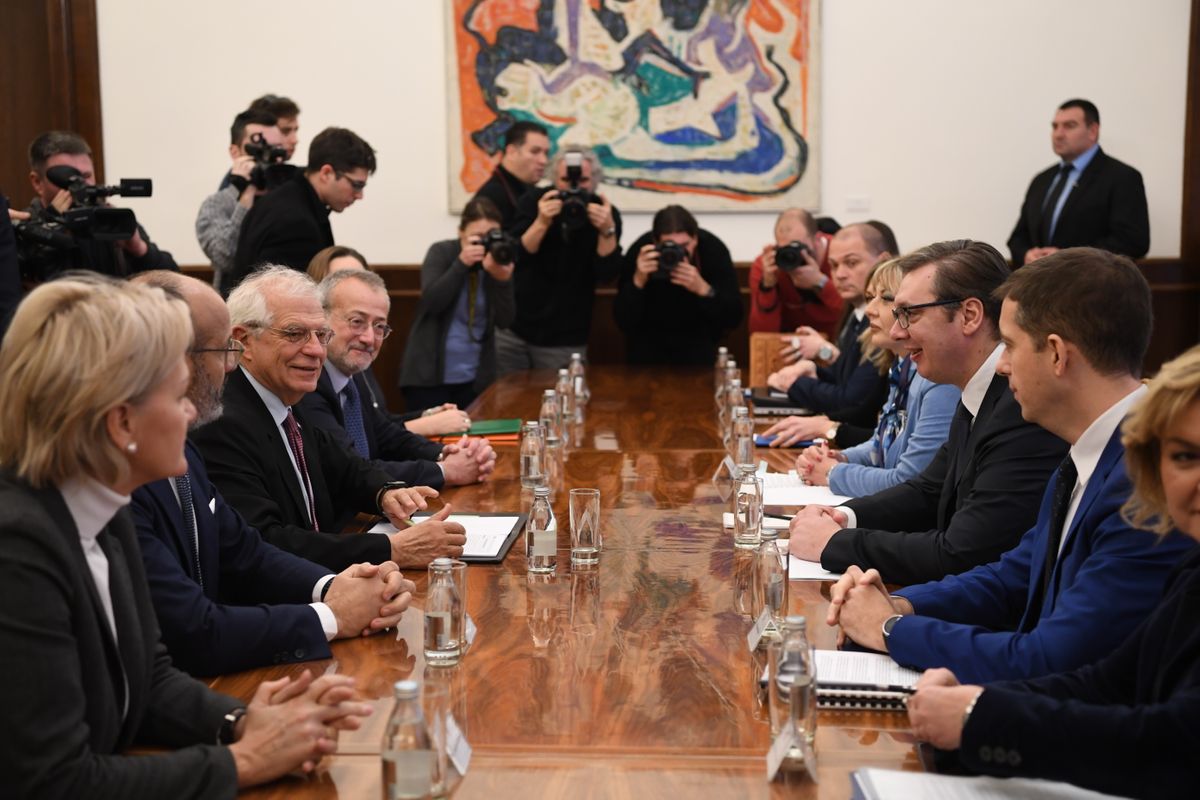 President Vučić said that all the important issues and the Serbian economy were discussed at the meeting and added that he asked Borrell for the EU to do something that is outside the usual EU rules i.e. to consider in the future a solution where we would have no borders with the EU and between ourselves because it would mean a lot to the citizens and the economy.
The President pointed out that it is important to maintain peace and stability for the further progress of the Serbian economy and to continue the activities related to the "Mini Schengen", to work with the EU to open up the entire region and to have a single market and to open the borders to Croatia, Hungary, Slovenia and the "Schengen countries" so that our people would see a tangible benefit.
"Of course, the key solution is to become a full member of the European Union," added President Vučić. 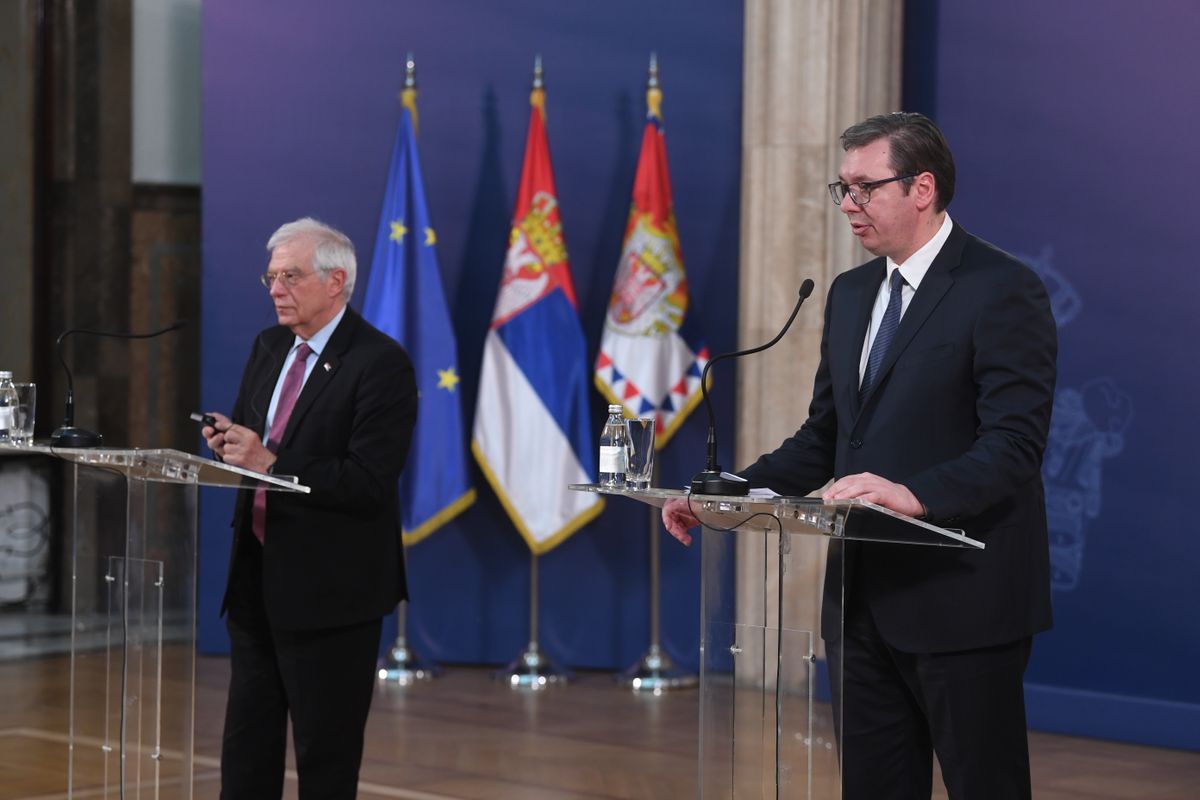 The President added that they also discussed the situation in the region as well as Serbia's relations with Russia and China, and said that Serbia was undoubtedly on the European path and that we do not hide this from our partners from Russia and China, but that we will continue our cooperation with those countries.
"We also tackled the rule of law. There are many things to be done in this field, and Borrell has presented the EU's views in an open manner. I think the whole region has got a great friend, a good politician who will be strict and fair to us and I have huge confidence in him. I welcome him," added President Vučić. 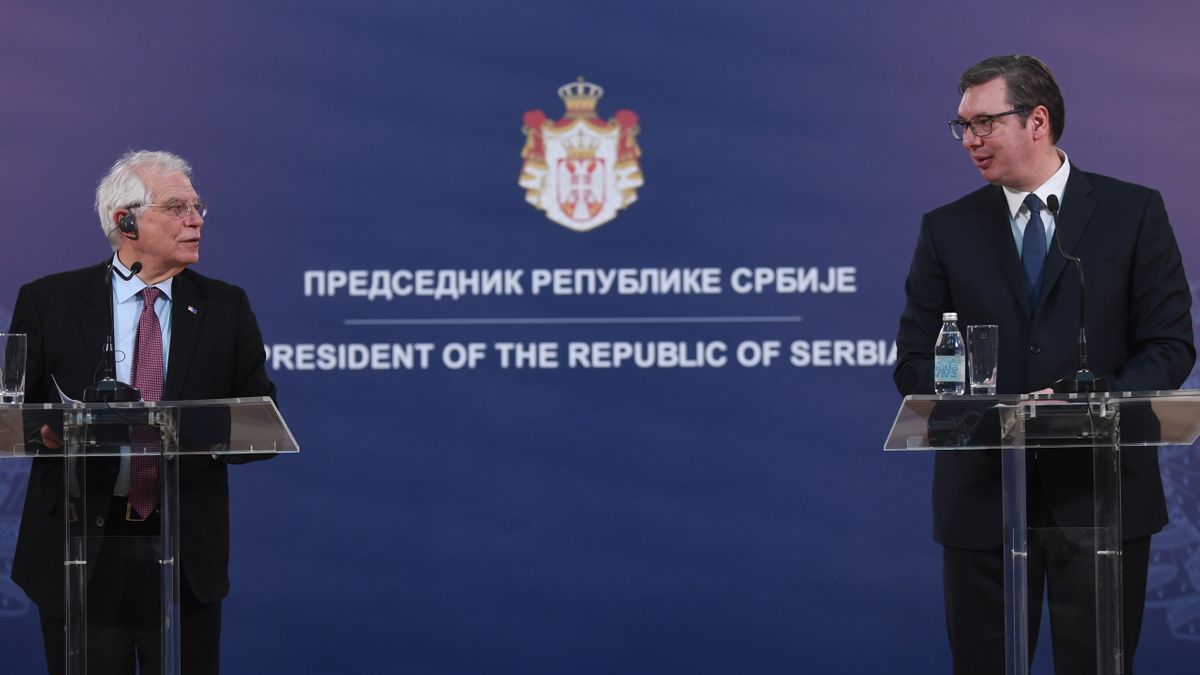 The EU High Representative for Foreign Affairs and Security Policy Joseph Borrell said today that he hoped the dialogue between Belgrade and Priština would resume soon.
"I hope that will happen soon. When it does, the EU will be ready to continue mediating the dialogue," Borrell said.
He stressed that it was not up to the EU to decide what the outcome of the dialogue would be, but rather that it was up to Serbia and Kosovo, while the EU has to be more involved in the mediation than in recent months.
Borrell added that this was the reason he came to visit the region, and he started with Kosovo because there is important work to be done and talks between Kosovo and Serbia need to be restored.
"This is my first visit to the Western Balkans and I wanted to do it because for me the Western Balkans is part of Europe and beyond, it needs to be part of the EU - geographically, culturally, through economic ties, and most importantly, because of the aspirations of its citizens," said Borrell. 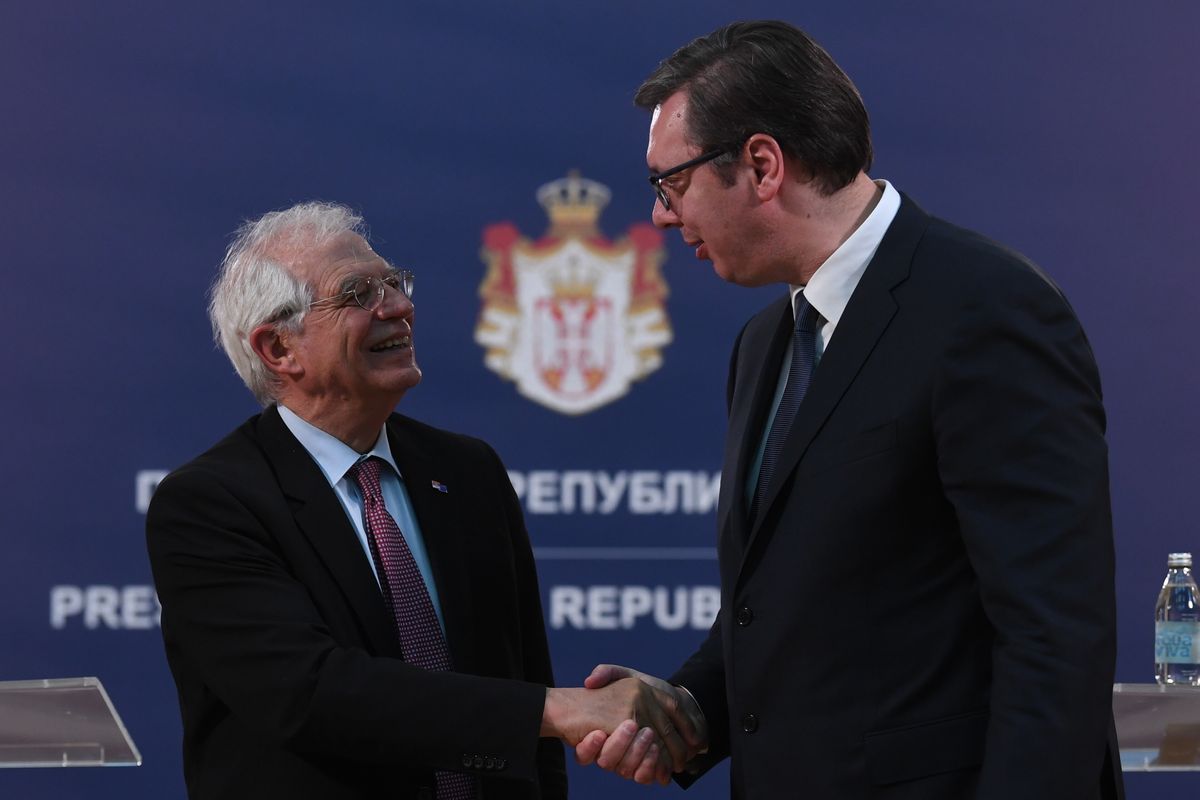 The EU High Representative added that he told Vučić he saw Serbia as a key EU partner and that during this visit he wanted to convey how committed the EU is to Serbia's EU accession process.
According to him, the process should be faster and that greater effort should be made by both Serbia and the EU.
He said that in the last 10 years the European Union has provided Serbia with almost € 12.5 billion in grants.
Borrell said that he conveyed to the President the need for Serbia's foreign policy to be programmatically aligned with the EU's foreign policy and, in this respect, to really come closer, that is to say, that Serbia and the EU speak "with one voice."
Borrell said he also discussed with Vučić the security issues related to the Middle East and Libya and thanked Serbia for its participation in the EU missions in Somalia, Mali and the Central African Republic, where Serbian soldiers, he said, work closely with their European counterparts. 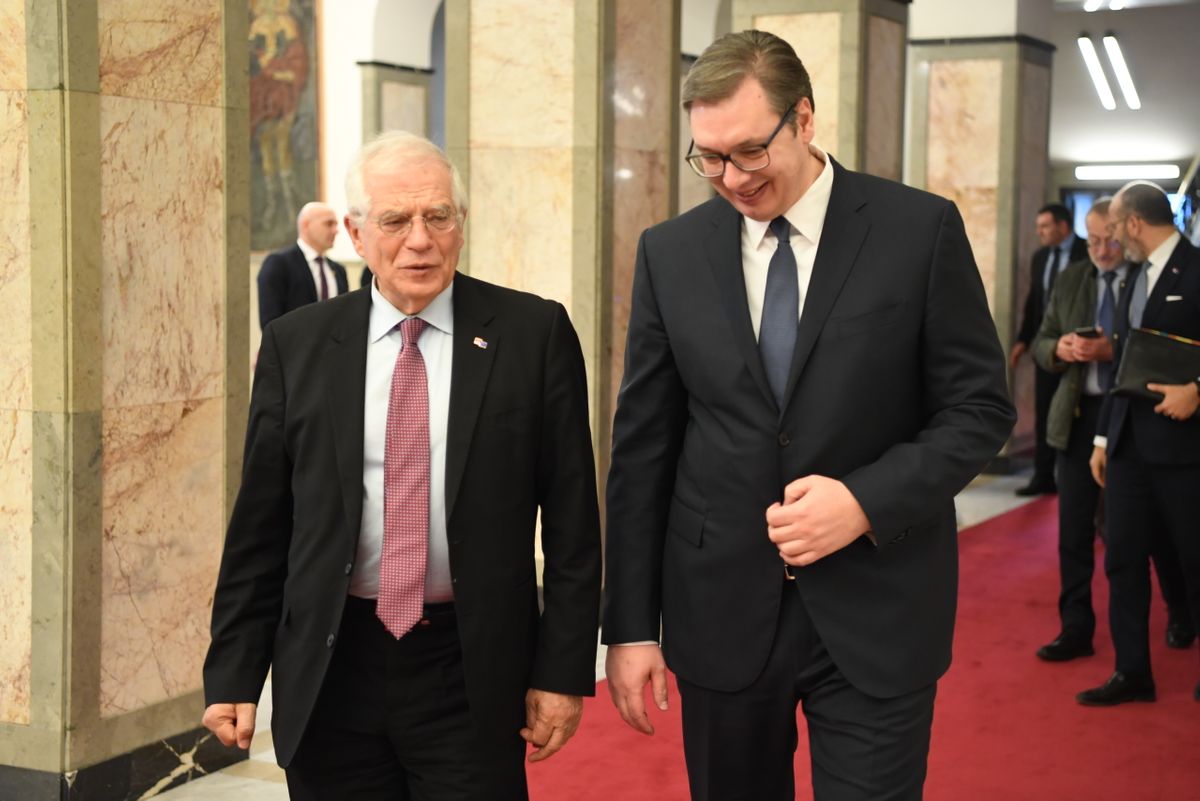