President of the Republic of Serbia Aleksandar Vučić met today with the President of Armenia Armen Sarkissian who is staying for a two-day official visit to Belgrade. 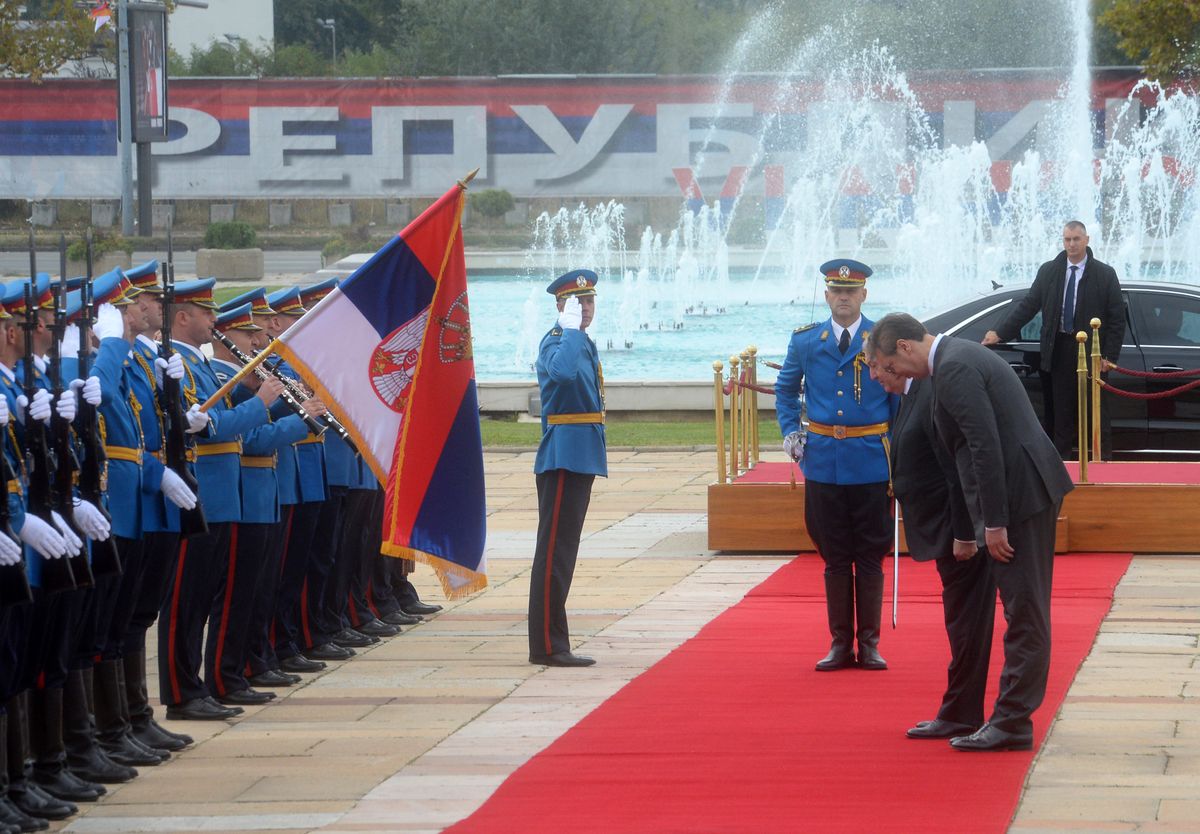 Before the tête-à-tête meeting of the two presidents, a ceremonial welcome was organised for the President of Armenia and the delegation he headed, with the review of the Serbian Guard troops, red carpet and intonation of both countries' national anthems. The Minister of Foreign Affairs of Armenia Artak Apitonian was also the part of the delegation as well as numerous businessmen from Armenia.
After the talks with President of Armenia Armen Sarkissian, President Vučić said that the implementation of at least a part of the discussed topics would significantly improve our friendship.
„If we manage to achieve merely a part of what we discussed today, I believe that our friendship will stand on even firmer foundations, that the house of friendship will be constructed even more solidly and of even more durable material. The ties that connect our two countries are considerable as we have a strong historical connectedness", emphasised President Vučić. 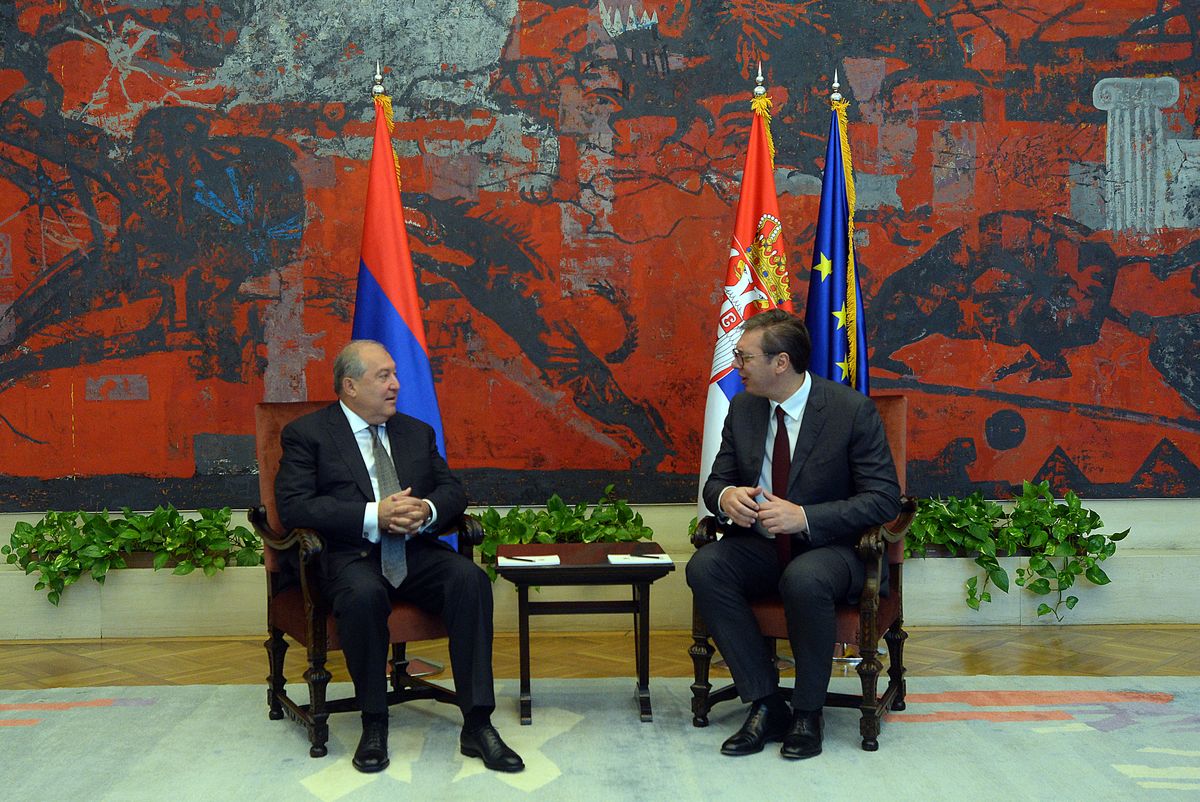 President Vučić announced that Serbia will confer a more extensive openness in the relations with Armenia by opening the embassy in Yerevan by the end of the year. In addition, Serbia will abolish visas for the citizens of Armenia hoping for a reciprocal move of Yerevan.
He added that political relations between the two countries are very good and said that Armenia understands our position with respect to Kosovo and Metohija, while Serbia seeks to have a well-balanced position and always underpins a peaceful solution to the problems existing in the region that appertains to Armenia as well.
President Vučić announced that the President of Armenia will discuss digitalisation today with the Prime Minister Ana Brnabić, as Armenia attributes huge importance to modern technologies and artificial intelligence.
„Armenia invests a lot in digitalisation, modern technologies, artificial intelligence and innovative technologies and we wish to learn about that. We will cooperate together and we hereby invite everyone to invest in our countries, to invest in digital and modern technologies so that our young scientists can go to Armenia and learn from them", said the President. 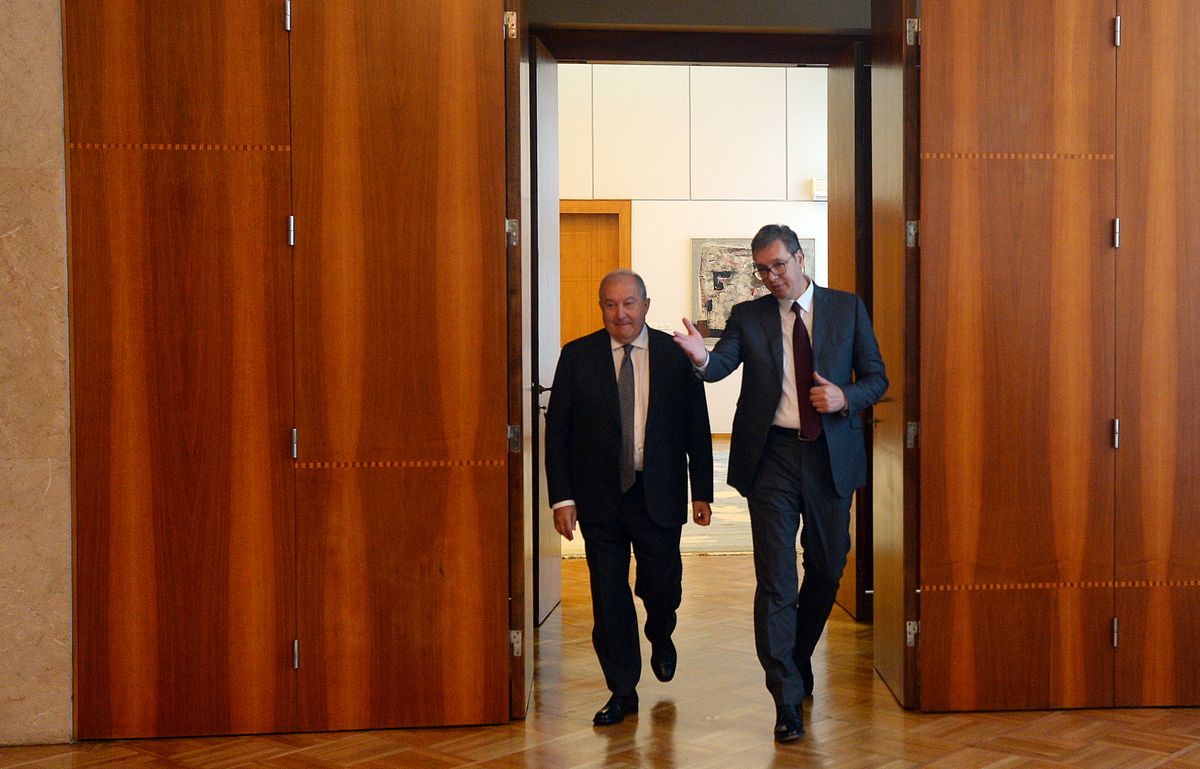 President Vučić added that Armenia invests much in educational centres for the youth development in order to be able to keep up with the contemporary world trends and that we can exchange some experiences and collectively invite the global companies to establish their centres in our countries, but also to jointly act towards third markets with certain products and ideas.
President Vučić also said that he tackled with his Armenian counterpart the food processing, delivery and logistics, and expressed his belief that we will find many common points in those fields.
He stressed that there still remains the possibility to be considered which he also discussed with President Sarkissian at the meeting in Munich, with respect to the establishment of a flight between Belgrade and Yerevan as such connection would be very important for the scientific, intellectual and business contacts.
President of Armenia Armen Sarkissian emphasised that the talks with President of Serbia Aleksandar Vučić reconfirmed the commitment and the ambition of the two countries to reinforce the cooperation and open a new chapter in mutual relations. 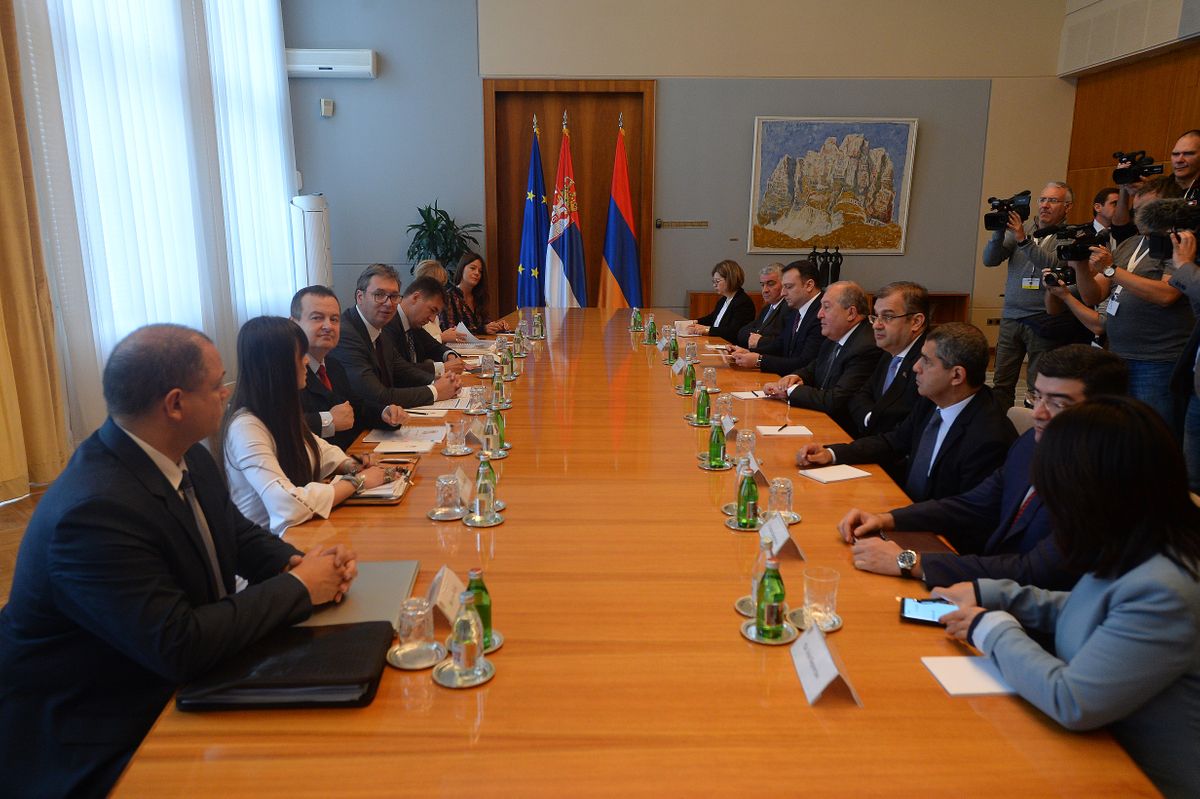 President Sarkissian expressed his hope that in the near future he will get the opportunity to host the President of Serbia in an official visit.
Along with expressing his gratitude for the cordial welcome, he pointed out the capacity for intensification of cooperation in diverse fields and recalled the help of Serbian people to the people of Armenia after the colossal earthquake in 1988 which that country, as President Sarkissian iterated - will not forget.
“This is my first official visit to Serbia. Our peoples have centuries-long historical and cultural ties that nowadays evolve into dynamic inter-state relations founded on the vision for the future", said President Sarkissian.
He added that today's talks were constructive as a continuation of the meetings launched at the Munich Security Conference held at the beginning of this year. 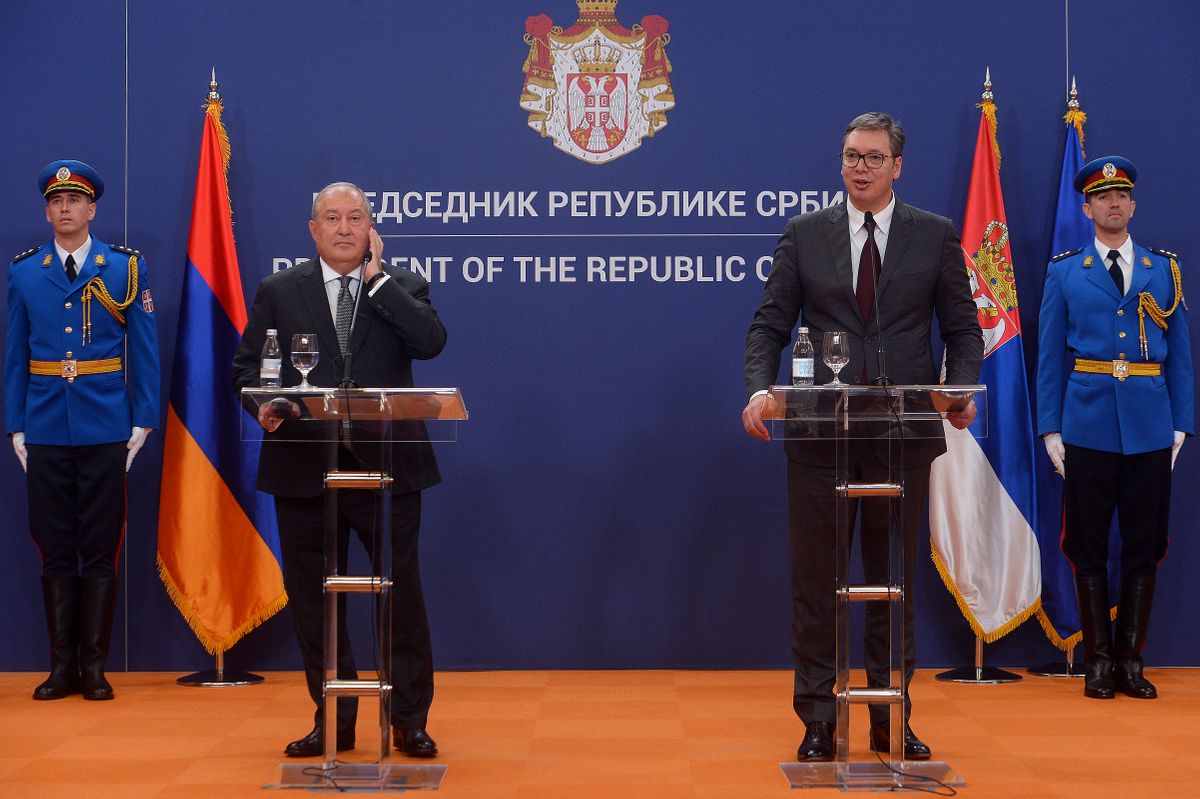 “We have jointly affirmed the commitment and desire to strengthen our cooperation and open a new chapter in our relations - political dialogue of Serbia and Armenia, cooperation in the fields of food industry, tourism, IT, artificial intelligence, communications in which we can envision the development in order to facilitate the implementation of new initiatives", said President Sarkissian.
He added that the drive for the cooperation of the two countries can be the cooperation in innovations and high technologies for which reason the delegation of Armenia included the high-tech companies' representatives who will talk with their Serbian counterparts about the possibilities of investments.
The President of Armenia welcomed the decision of Serbia to abolish visas for the citizens of this country as well as the announcement of the opening of the Serbian embassy in Armenia. 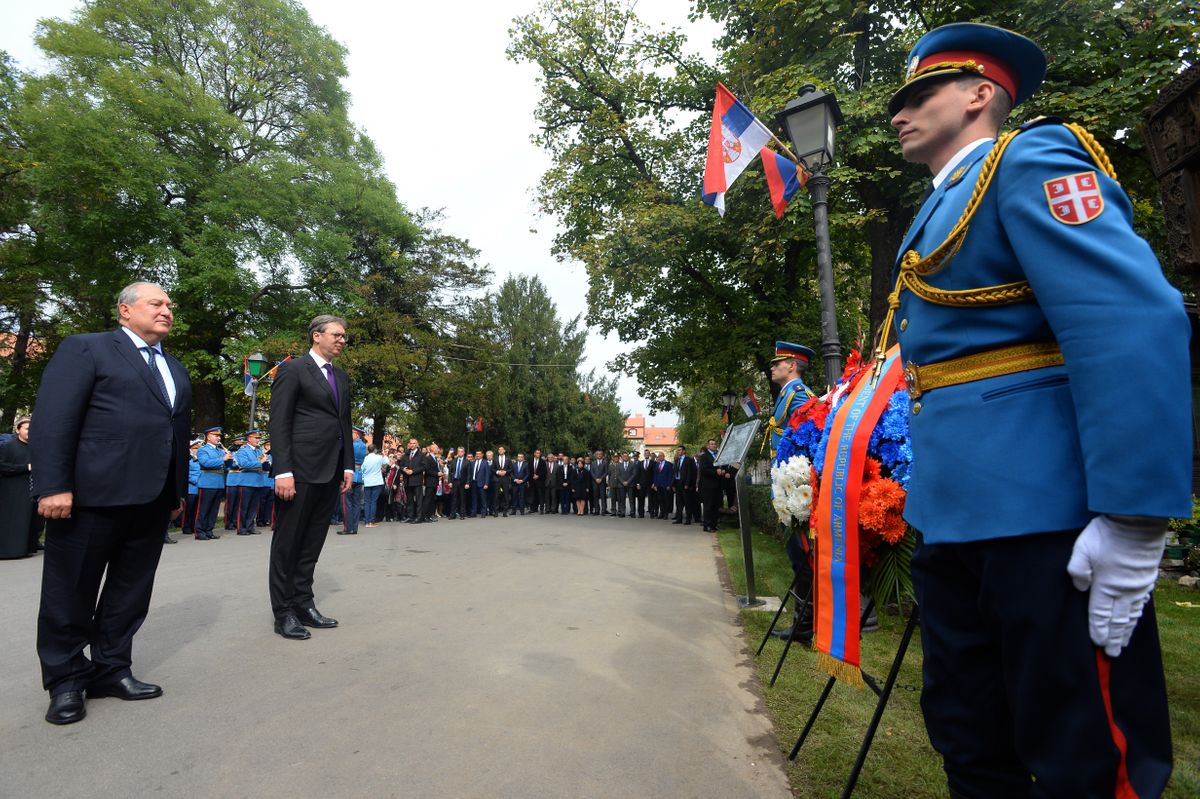 Presidents of Serbia and Armenia, Aleksandar Vučić and Armen Sarkissian, laid wreaths at the Armenian khachkar - cross-stone in Zemun, the symbol of Serbian-Armenian friendship. The cross-stone is also the symbol of gratitude of the Armenian people to the seven members of the Air Force and Air Defence who got killed in 1988 while transporting humanitarian aid to the earthquake-stricken Armenia.
The wreath laid by the President of Serbia reads: "To the killed airmen, the heroes of humanity - President of the Republic of Serbia Aleksandar Vučić", while the wreath arranged with flowers in the colours of Armenian flag reads. "From the President of Armenia" in Armenian and English languages.
The President of Armenia talked to the family members of the killed airmen who transported the humanitarian aid and invited them to be his personal guests and to join him in visiting the place where the tragedy occurred. 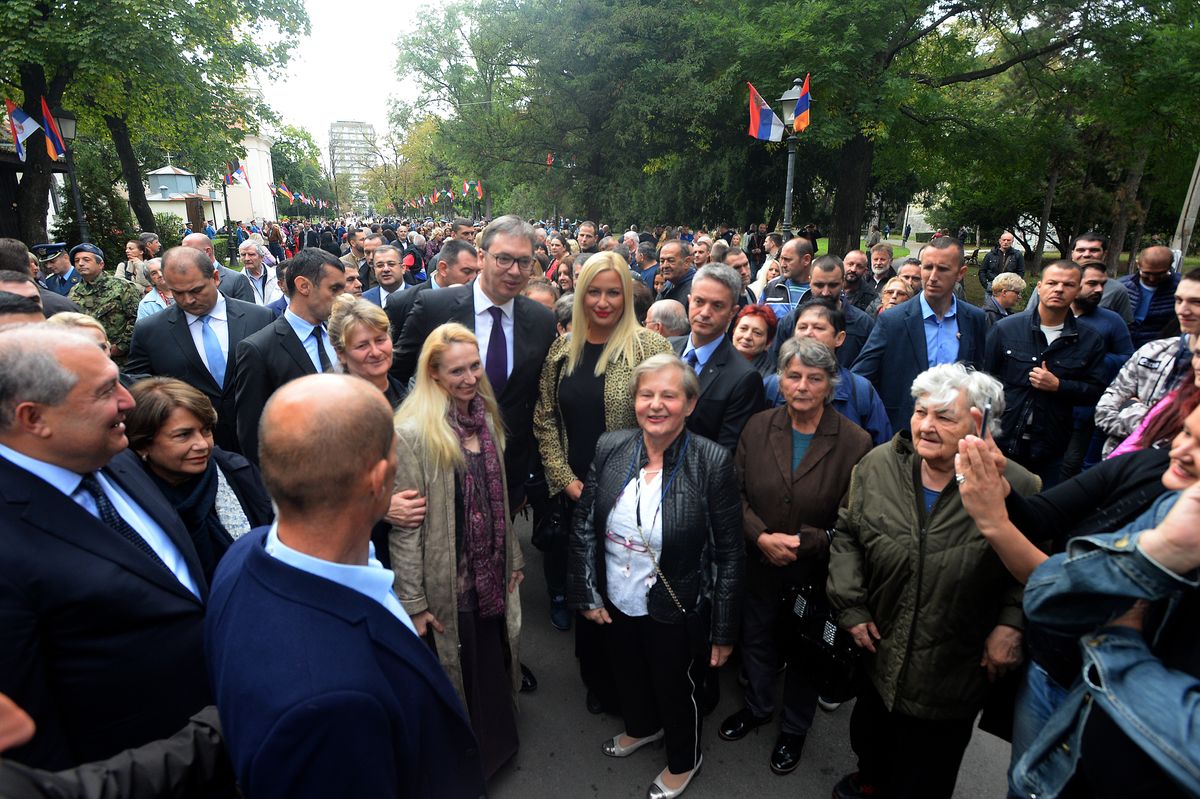 President Vučić awards decorations on the occasion of the National Day

Meeting with the representatives of Serbs from the region