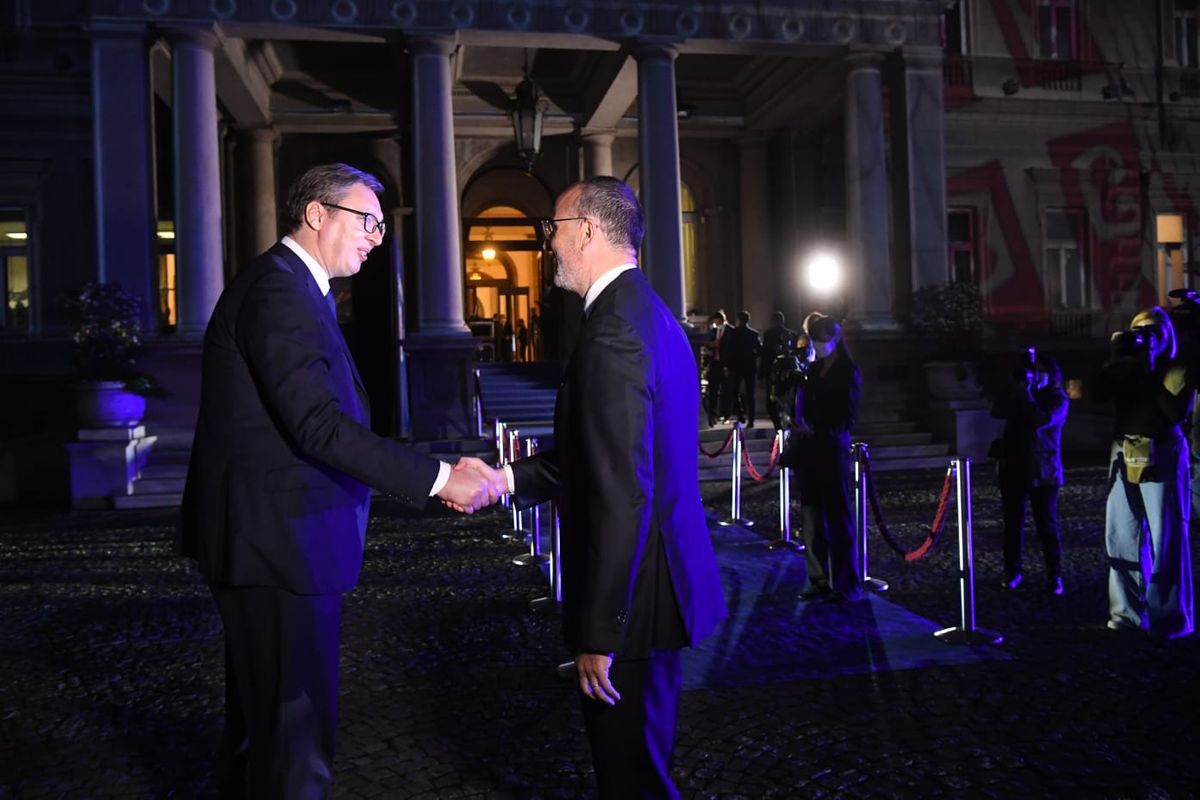 President Vučić said tonight that the visionary idea of Robert Schuman brought a true victory of the new trust after the Second World War and faith in the unification of differences in peace and solidarity, with the message that Serbia has that faith, as well as hope that it will become a country that will be gladly regarded in the European family of nations.
Congratulating everyone in Serbia and the EU on Europe Day, President Vučić noted that May 9, the day when the great victory of freedom is celebrated, was won with huge sacrifices.
"While the horrors of war were still fresh in memory and Europe was healing the wounds of World War II, it also had people like Robert Schuman who understood that future can only be created based on the reconciliation of nations and their unity," the President said. He added that the people dared to see the recent adversaries as future allies. 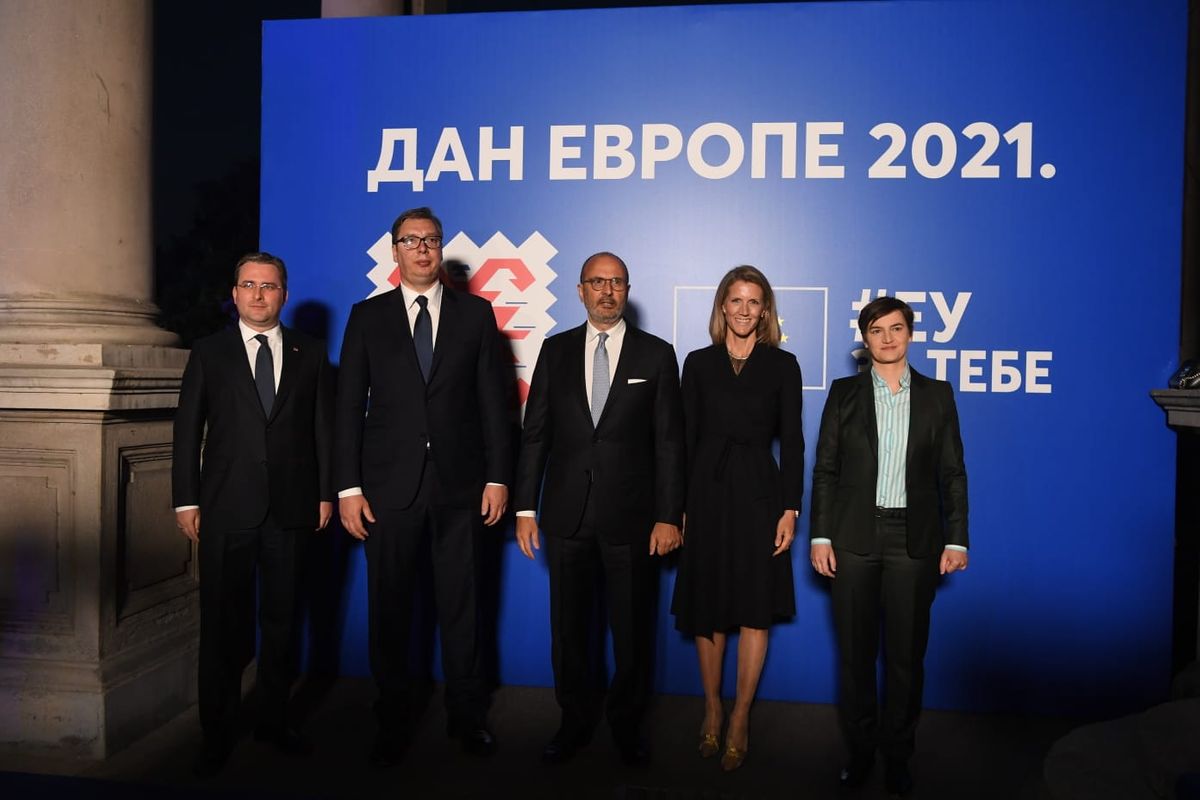 "Schuman's visionary idea that peace will be preserved, if the creative forces are commensurate with the dangers that threaten, that Europe will emerge from specific achievements, has brought a true victory of newly found trust and faith in uniting differences in peace and solidarity," said President Vučić.
He said that Serbia, although it does not always look like that, has that faith, as well as the hope that our concrete achievements, on the long and not easy path to EU membership, will be adequately valued and that with your help, support and criticism, Serbia will become a country that you will be happy to see in the European community of nations. I believe that with our support, help and criticism, we would also contribute to the EU becoming an even better place to live," said President Vučić. 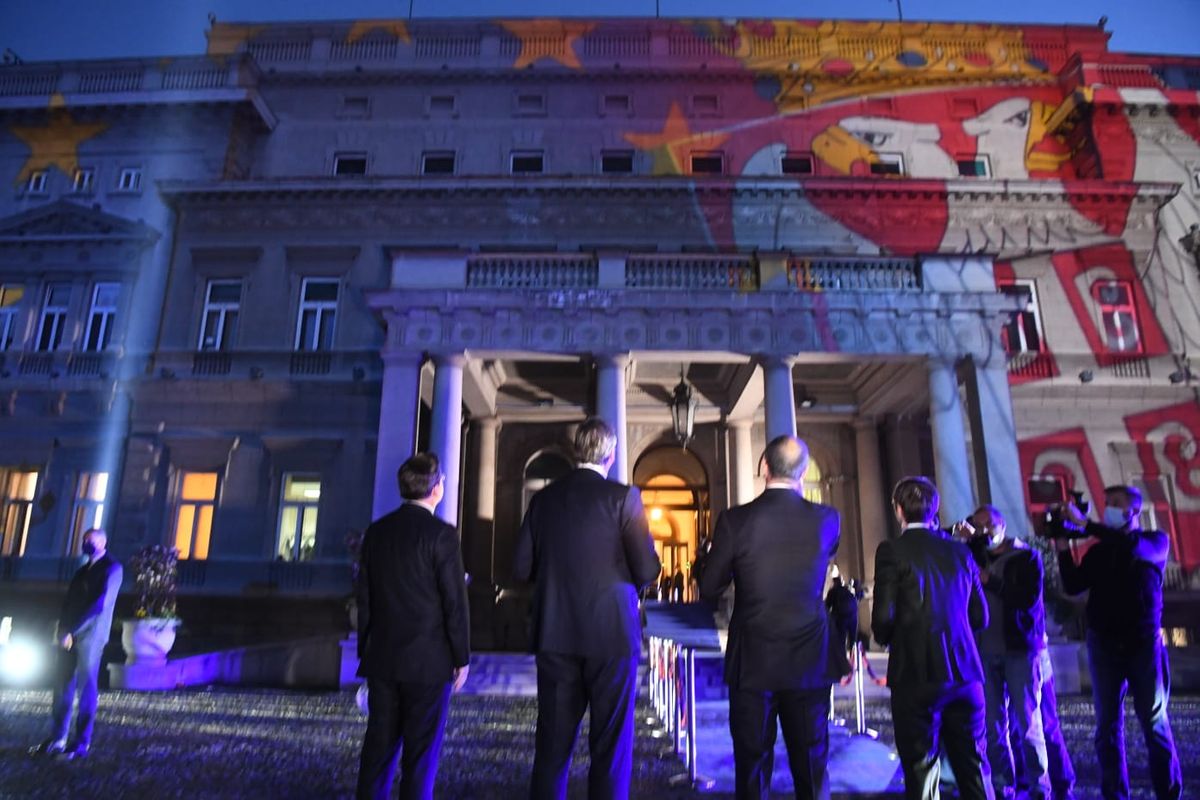 Full membership in the EU, with a compromise solution to the issue of Kosovo and Metohija, is a way to achieve the goal and make Serbia orderly and successful, which would mean that we are on a good, European path, the President of Serbia said.
He added that we still had to make a lot of efforts in reforms, not because someone is asking us to do that, but because we know that it brings us and the country a benefit. He also pointed out that the reforms in the rule of law are exceptionally important, which are now being approached with much more responsibility.
President Vučić also pointed out that the EU is undoubtedly the largest donor, investor, and by far the most important trade partner of Serbia, and noted that about two-thirds of all trade and even more service activities are EU related and that these are facts, whether someone likes it or not. He pointed out that seven years ago when he became the Prime Minister, three times fewer people were employed in companies that came from EU countries than today. 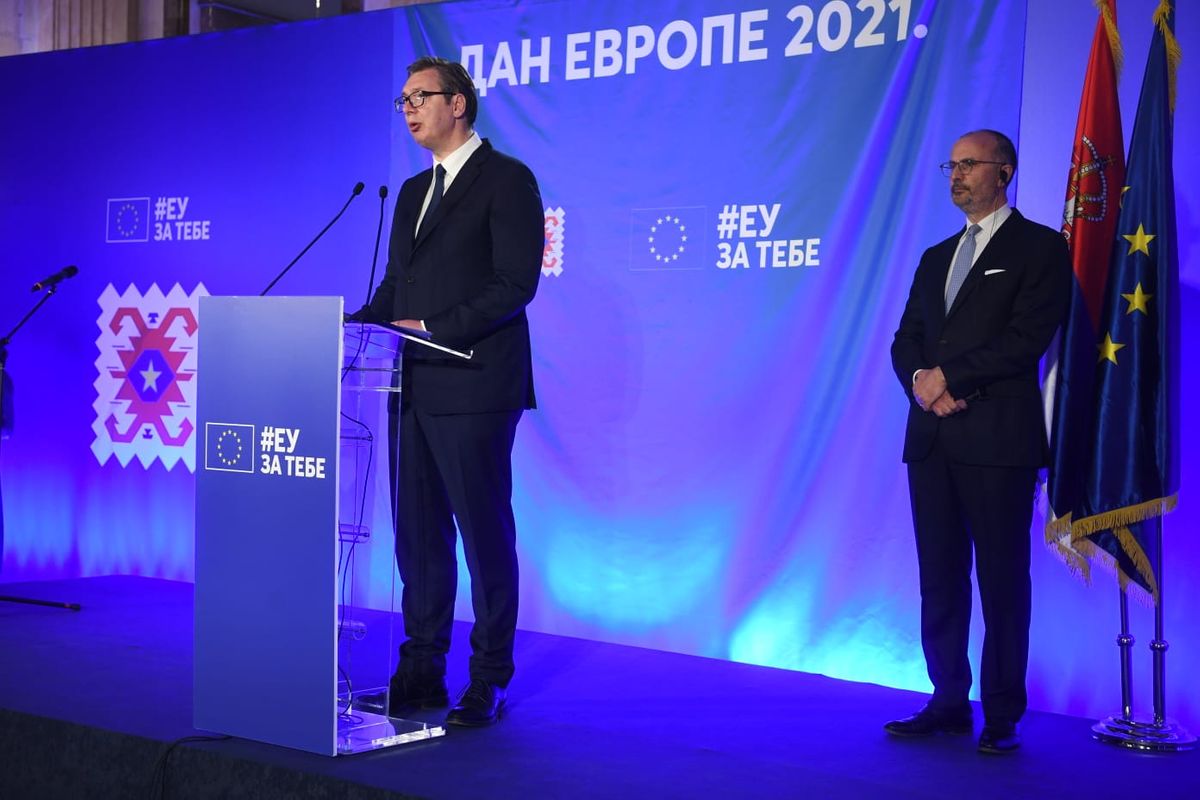 "Despite all the problems, it shows how much we managed to do together and make good results, to provide people with life, security at work, to show that we can take care of them more," the President said, noting the surpassing EU assistance in the field of education.
The President said that during the recent visit to the EU, which he assessed as the best one so far, Serbia received additional support for infrastructure projects, primarily for modernisation, i.e. the construction of a new Belgrade-Niš-Preševo railway. He added that this was confirmed in the letter of the President of the European Commission, Ursula von der Layen.
"I am grateful to Von der Layen for pointing out that this is a game-changer in our relations. It is a turning point because that support exceeds everything we have done together when you look at the scale, strength and significance of that project," the President said. 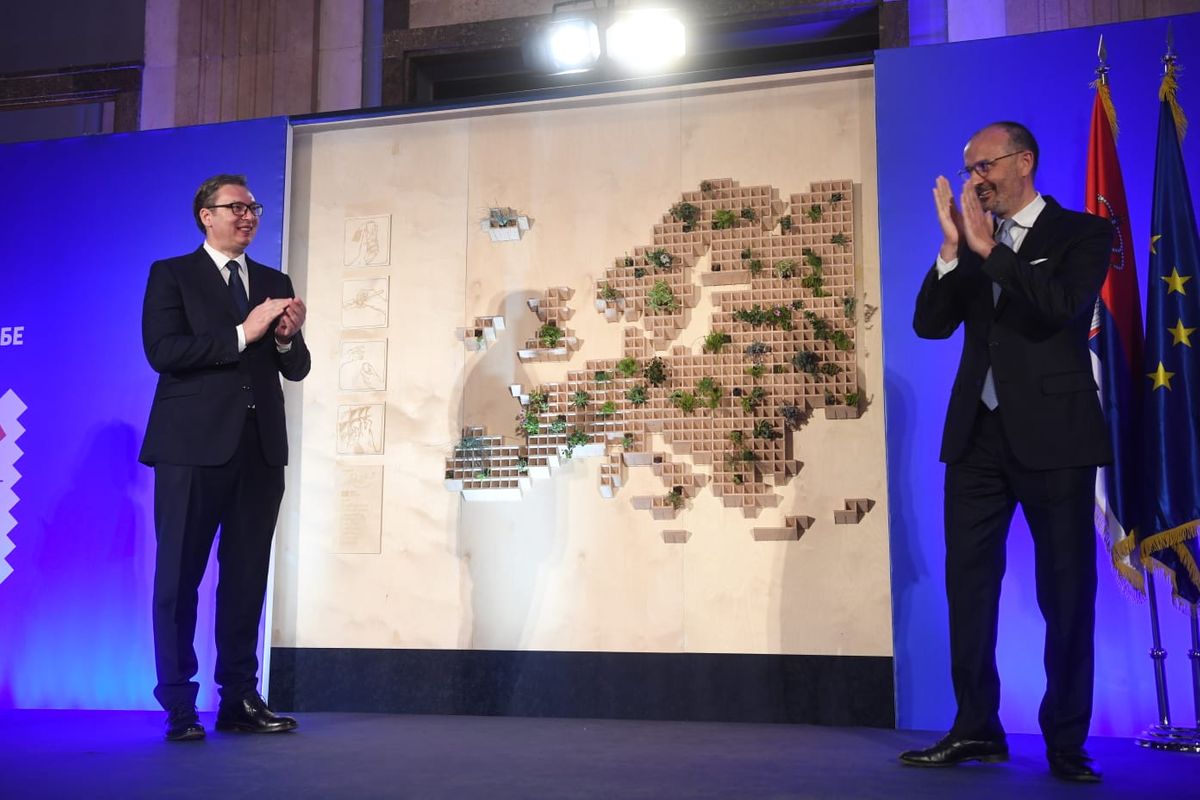 The President pointed out that Serbia and its citizens consider Europe as their home and that is why we want to give our contribution to peace through regional connections, the Berlin Conference and the mini Schengen initiative.
"Encouraged by the message of European officials, I hope that I will be able to host them soon so that we can discuss the further acceleration of our European path," concluded President Vučić.
The head of the EU Delegation to Serbia, Sem Fabrizi, said tonight that the pandemic did not shift the focus of the EU from the region of the Western Balkans and that the EU stands firmly on the fact that the future of Serbia is in the EU. 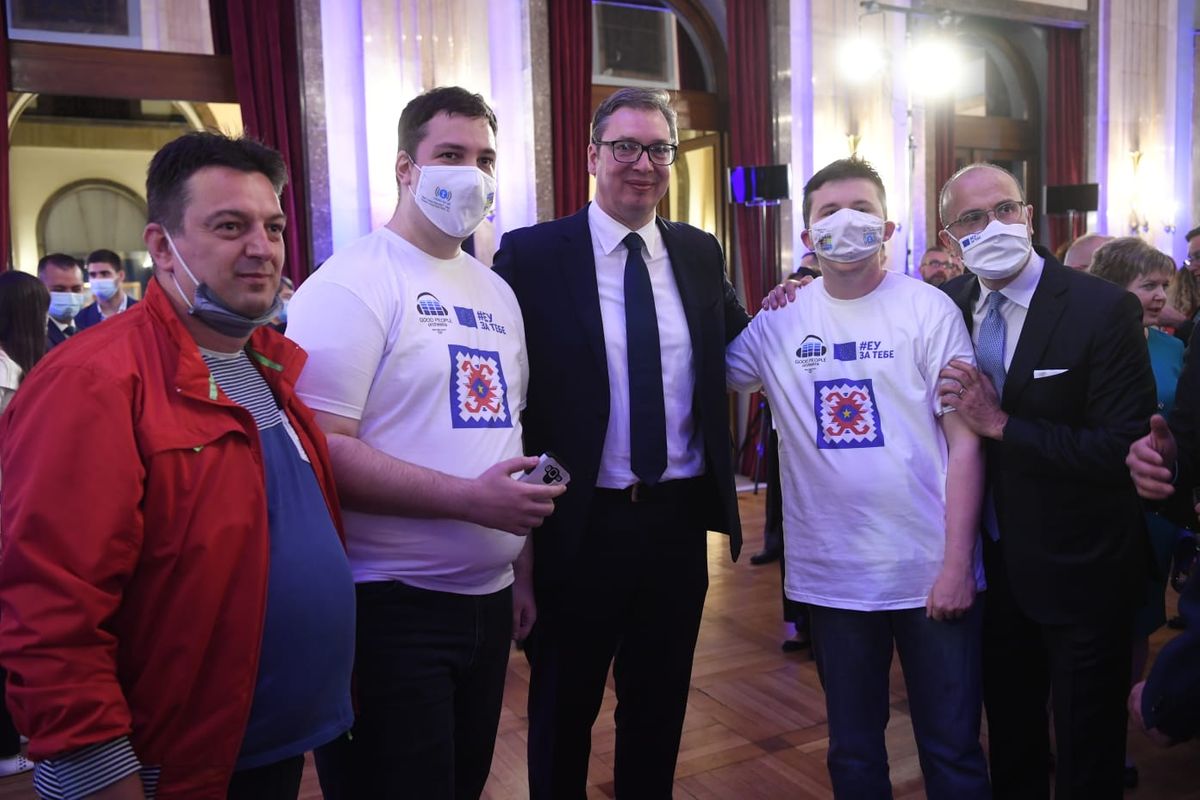 He thanked everyone for gathering on the eve of the anniversary of the Schuman Declaration, which was made on May 9, 1950, when the foundations of what the EU is today were laid.
He pointed out that the EU is the leader of global changes and that the Union is based on several fundamental ideas that replace confrontation with cooperation, and those are inclusiveness and solidarity that can overcome inequality.
He pointed out that Serbia, together with the EU, was in solidarity in various crises, and called for joint construction of the future in which, as he said, we should count on each other.
Share