President of the Republic of Serbia Aleksandar Vučić and Prime Minister of the Government of the Republic of Bulgaria Boyko Borisov attended today the ceremonial release for traffic of the section on the eastern arm of the Corridor 10 - from Prosek to Crvena Reka - in the total length of 22.5 kilometres, which thus completes the construction of the entire eastern arm of Corridor 10 from Dimitrovgrad to Niš in the length of 86.9 kilometres. 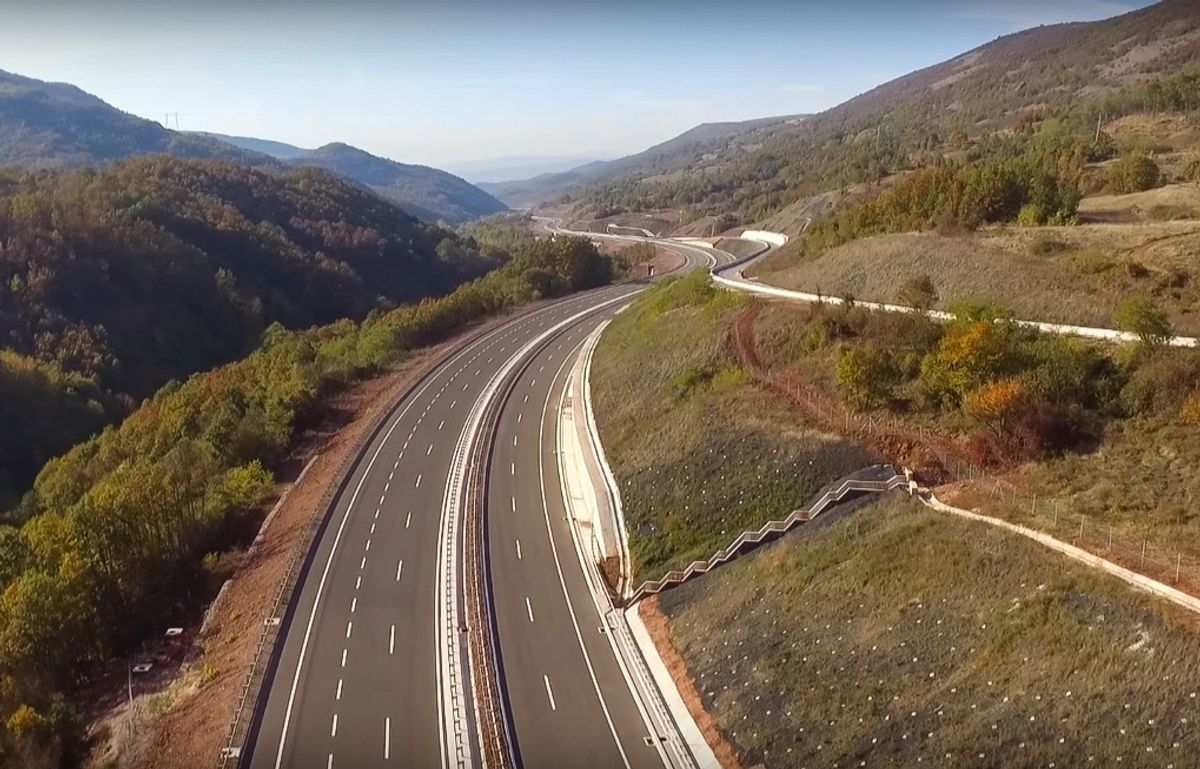 The total value of the eastern arm construction is estimated at about 476 million euros. This section of the eastern arm is also considered to be the most challenging one as it bypassed the Sićevac Gorge.
President Vučić expressed his satisfaction with the completion of works on the eastern arm of Corridor 10 whereby the construction of the road Corridor 10 has been finalised. He thanked everybody who took part in the construction of the eastern arm section towards the border with Bulgaria.
"Thank you to all the wonderful and hardworking people who have worked to make this dream come true. For Serbia, this highway is not merely the kilometres, but also the connecting, new investments, new jobs, higher salaries and people remaining in their homes. This is the future we seek to leave to our children", said the President. 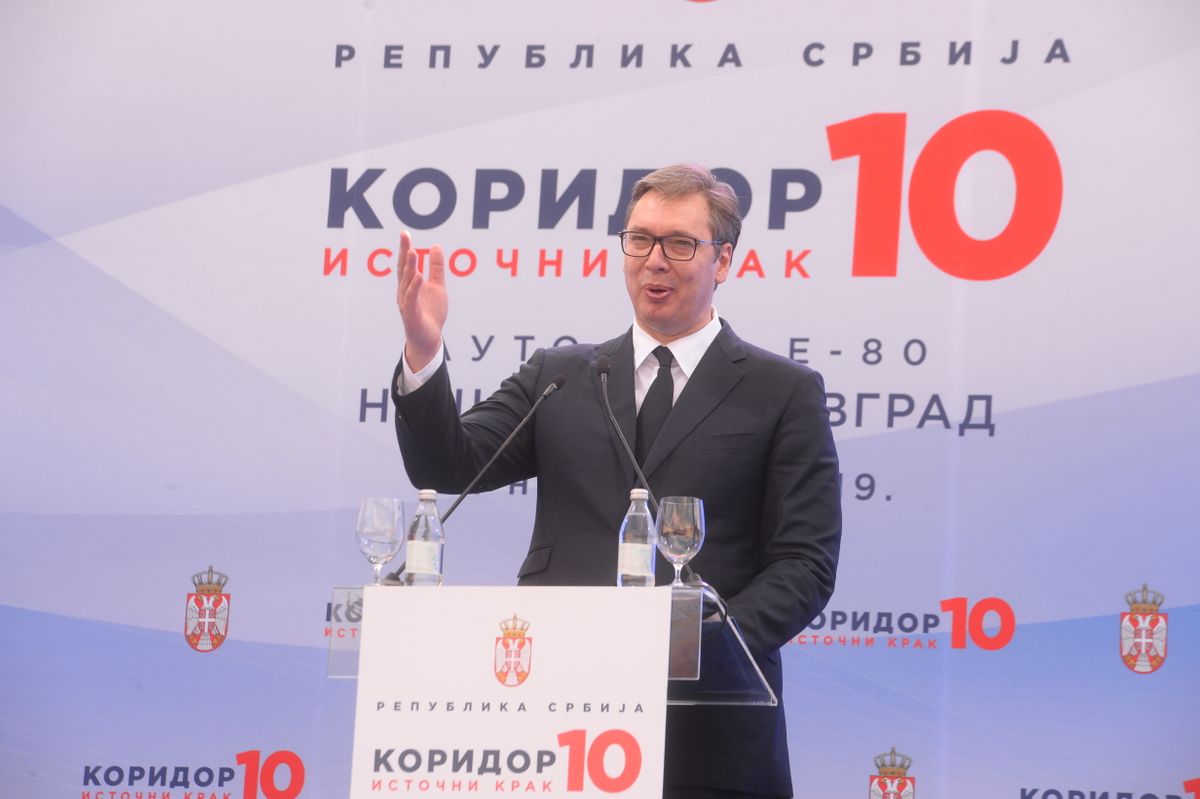 President Vučić conveyed to the citizens of Serbia that they should be proud of their work and efforts, thanks to which the Corridor 10 is completed. He added that the construction was financed by the citizens of Serbia through the European Investment Bank.
"Dear people, dear friends, thank you for showing how much you love Serbia, this most beautiful country. Everything is here today, every dream we dreamed, the hope we harboured, the faith we had, the effort we put in. And even if I tell you that I am happy - it would not be sufficient. Happiness is a humble word to describe what I feel upon the completion of the Corridor 10 which only in Serbia stretches for 813 kilometres“, said President Vučić.
President Vučić said that Corridor 10 is one of the most important transportation corridors that pass through Serbia thus connecting Austria, Hungary, Slovenia, Croatia, Bulgaria, Macedonia and Greece. 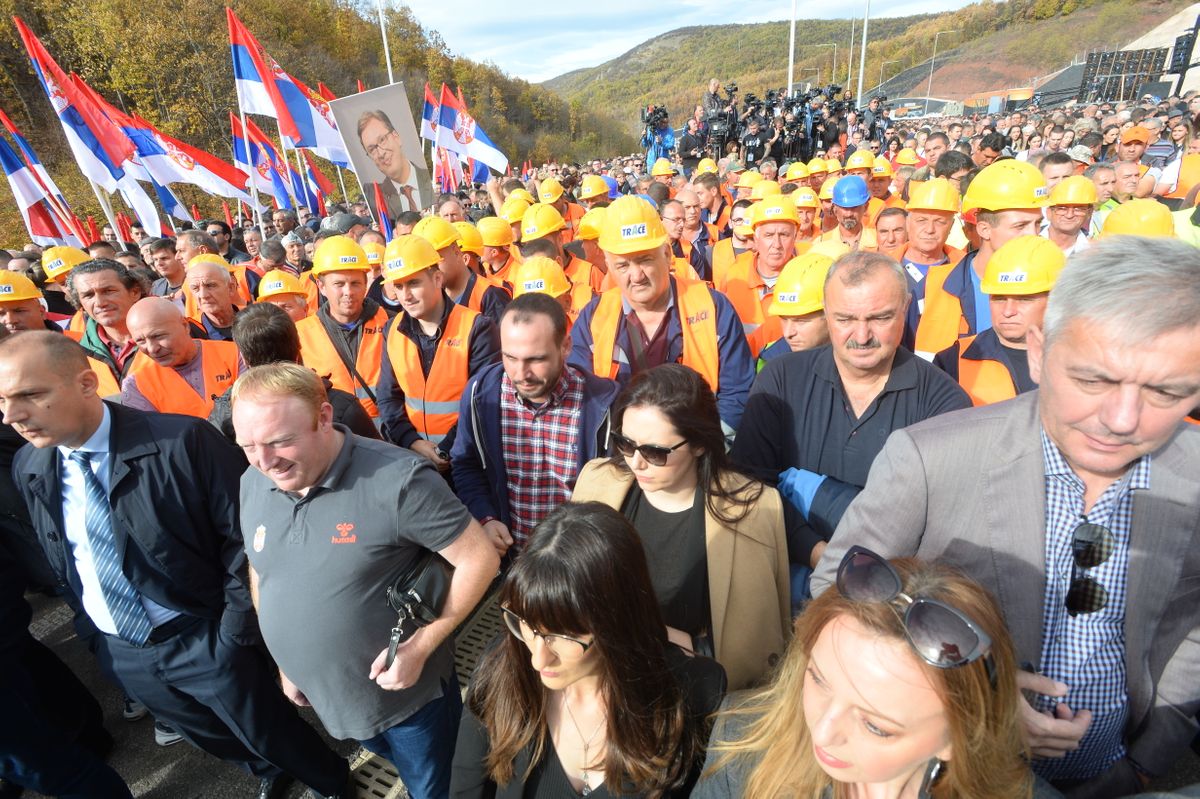 "We have more and more passengers, increased cargo traffic, because when we see trucks like in Germany or in the north of Italy - you know that you came to a developed country. Road construction is an investment for the future to bring new investments, jobs, higher turnover", said President Vučić and emphasised that in this part the peak traffic comes from Turkey whose citizens will now be able to travel faster and in a more cost-effective manner.
President Vučić emphasised that Bulgaria is today closer to us than ever and thanked Prime Minister Boyko Borisov because Bulgaria will complete the section towards Sofia.
„We are soon finalizing the connection of our gas pipelines and we will get connected in that way as well. This shows how much progress we have made and that it is worth living and staying here. I see happy people here today. We will not stop at this, we will build our country continuously. Today, we are proud to note that Serbia has completed the construction of Corridor 10. The eastern arm of Corridor 10 is the artery of life. Today I look forward to the life of the generations to be. I urge all young people to start thinking about returning, this is your country. Long live Serbia!", said President Vučić. 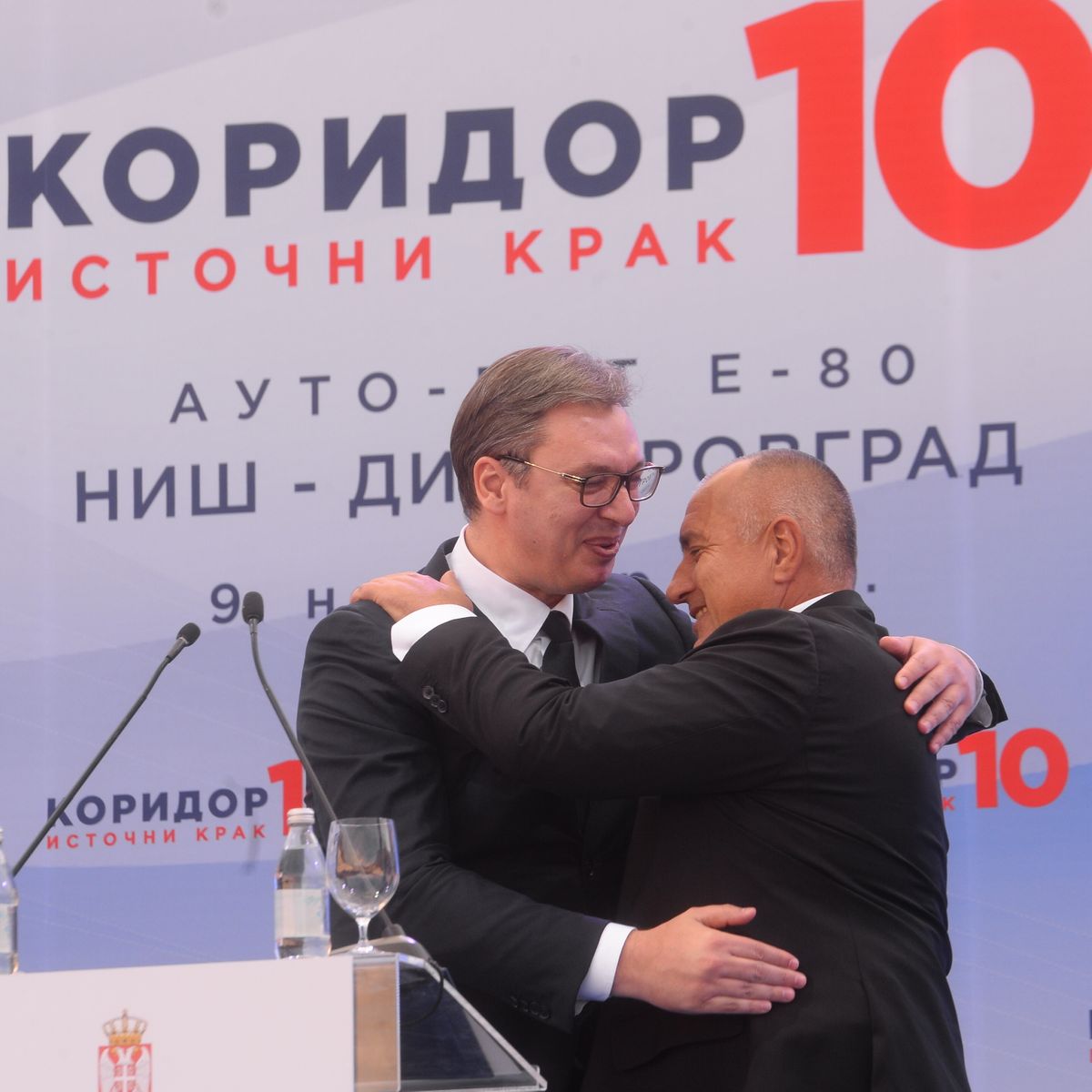 Prime Minister of the Republic of Bulgaria Boyko Borisov said that opening of the eastern arm of Corridor 10 connects the Western and Eastern Europe.
„Like the Germans, who had the Berlin Wall which fell 30 years ago, the wall between the two countries, Serbia and Bulgaria, has fallen", said Borisov.
Prime Minister Borisov congratulated everyone on the construction of the road, which, with great importance for the economy, will also be safe and without accidents.
"We have the port of Varna, Burgas and all the way to Istanbul we have no obstacles. The whole Bulgarian economy will be using this road in its entirety", said Borisov. 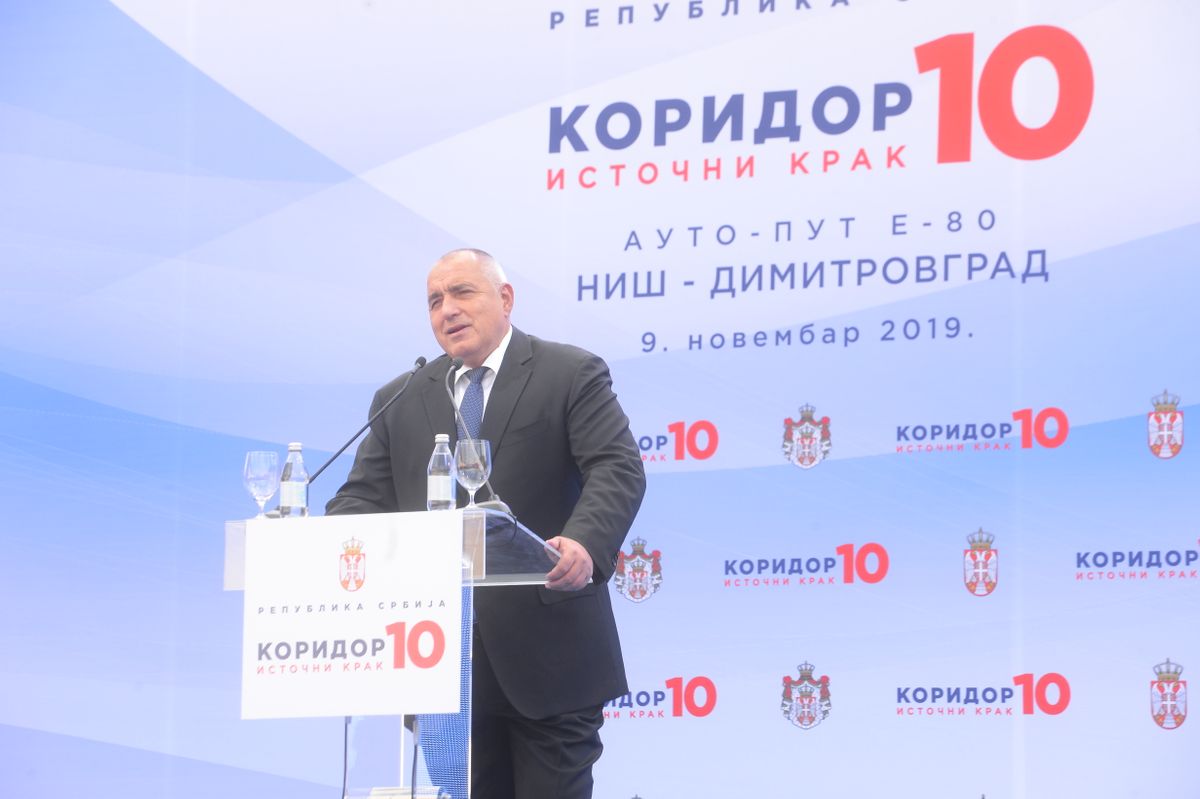 The total length of the entire Corridor 10 in Serbia is about 813 kilometres, and its eastern arm from Niš to Dimitrovgrad is 86.9 kilometres in total.
The sections on the eastern arm of Corridor 10 that are commissioned today are the sections from Prosek to Crvena Reka, with a total length of 22.5 km (Prosek-Bancarevo 9.4 km, Bancarevo Tunnel about 700 m, Bancarevo-Crvena Reka 12.4 km).
On the entire eastern arm from Niš to Dimitrovgrad - 87 bridges, five tunnels (Bancarevo, Sopot, Sarlah, Pržojna slope, Progon - total length of 2.6 km), five traffic loops, 12.5 million cubic meters of excavation, embankments of 9.5 million cubic metres and approximately 780,000 tonnes of asphalt were executed.
The eastern arm of Corridor 10 connects Serbia with Bulgaria, but it is also important as the transit corridor serving the traffic between Central Europe and Turkey towards the Middle East.
This highway will be connecting two districts - the Niš and Pirot districts with about 450.000 people, the large business centres in this part of Serbia, Niš and Pirot, and it will facilitate a better connection between Eastern Serbia and the nearest airport "Constantine the Great" in Niš as well as a better connection with the tourist destinations in this part of Serbia, such as Stara Planina. 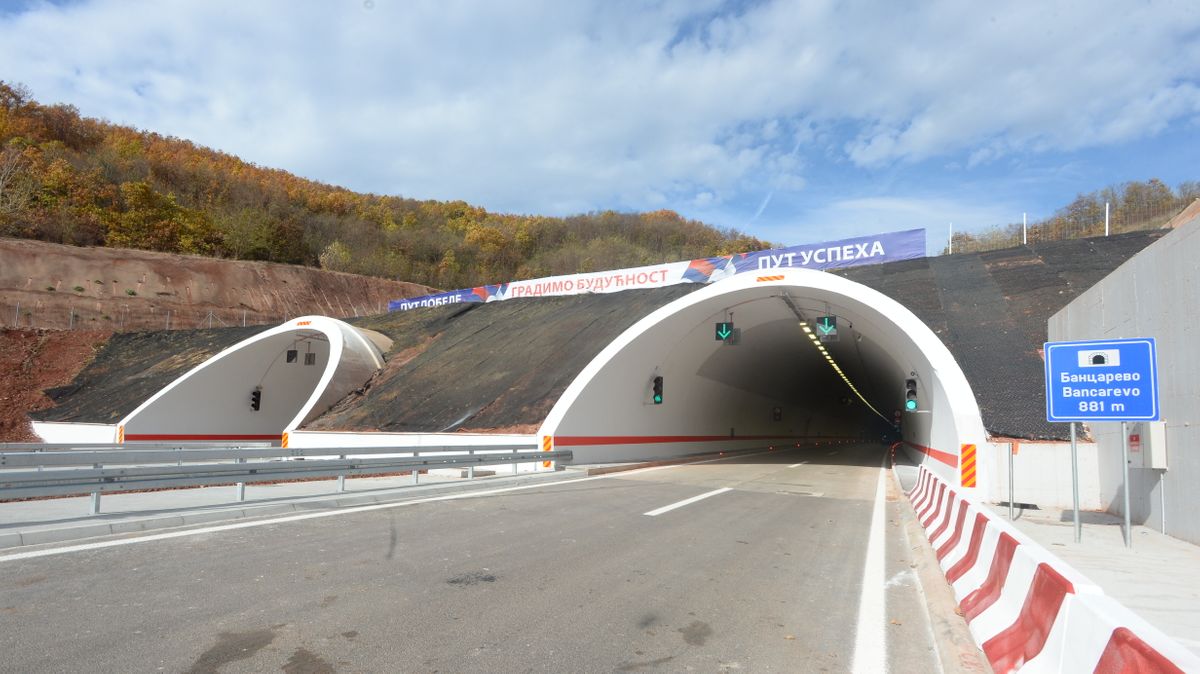