After the meeting with Chinese doctors, attended by Prime Minister Ana Brnabić and members of both Crisis Groups, President of the Republic of Serbia Aleksandar Vučić announced at a press conference held tonight at the Palace of Serbia that one more person died due to coronavirus.

"It is a 60-year-old female who has passed away at KBC Dragiša Mišović, and she is officially reported as the third victim of the coronavirus in the country," said President Vučić. He pointed out that the authorities have been working hard so far and have partially succeeded in slowing down the pandemic curve, so that there is no exponential growth of patients, as is the case in some countries.
President Vučić announced a change of approach in the fight against the coronavirus, which involves more testing, but also the isolation of people with mild clinical features.
"We will change our approach, and with the support of Chinese friends, we will initiate mass testing. We can expect a drastic increase in 48 hours. We have enough tests for the first days. In the meantime, we will get new tests and people who can carry out those tests," President Vučić said, adding that representatives of the country learned a great deal from exchanges with Chinese experts. 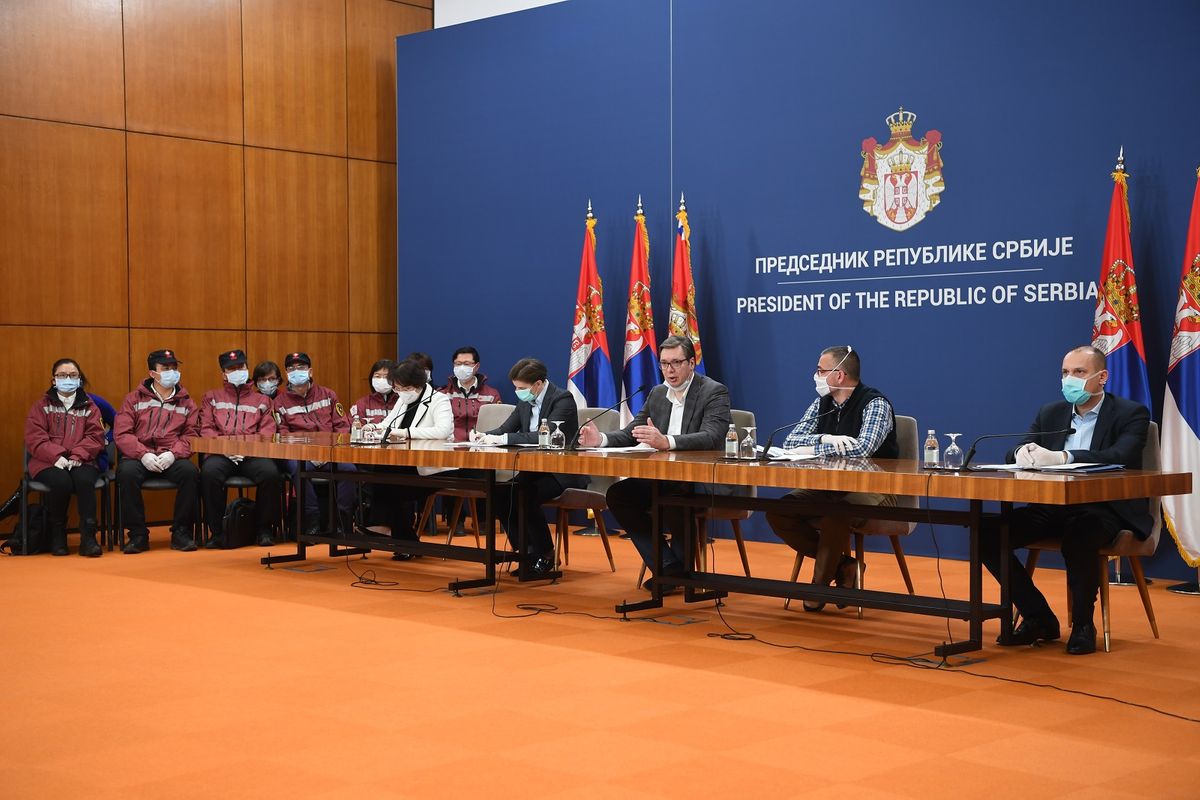 "We talked with our Chinese friends today. I am especially grateful to the Chinese Ambassador, Chen Bo, and above all - to the President of the People+s Republic of China - Xi Jinping, and these amazing people. We could learn so much from them today. Three things are essential here: how to apply the medical treatment and how to attack the coronavirus; what are the additional measures that the state can and must take to enable the healthcare system to do its job; and what are the economic measures to ease the crisis, i.e. to allow citizens to survive the period and have a decent future in the country," said President Vučić, adding that Chinese doctors welcomed the measures taken by Serbia.
He pointed out that the Chinese model was accepted, adding that everything planned will be challenging to perform, that there would be many problems in technical terms and that the state would fight twice as hard as before.
"The objective is to reach and treat as many people as possible, all who are infected. Thus, the Chinese defeated the virus, and in one city, which is the size of Serbia, the crisis lasted 29 days," explained President Vučić. He emphasised that thanks to China's support and the supply of respirators on other sides, Serbia will proportionally by the number of respirators rank among the top 20 countries of the world.
President Vučić stressed that doctors in Serbia are already tired and that they have more work to do in combating the virus in the days ahead.
"The 'thank you' we tell them is not enough. These people work 18-19 hours a day and risk their lives, fighting not for themselves, but for the patients and their country," President Vučić said and emphasized that full respect for the measures is a must. He added that Chinese experts said it was good that a curfew had been introduced, that it did not have to be expanded, but that people had to be more disciplined. He announced that the police would tighten control over people in isolation and that the penalties would be severe.

President Vučić said triage would be carried out with the help of Chinese experts and the patients with milder symptoms will be placed in special isolation units.
"We are ready to immediately provide 3,000 beds for the lightest patients, to monitor and follow their illness from beginning to the end, and that will be either at the Fair or the Student City in Belgrade, in the Čair Hall in Niš, Spence in Novi Sad. We will render a decision about it tomorrow. Our army can put up 3,000 beds in one day. Let's not leave anything to chance," said President Vučić, adding that non-invasive respirators will be used for the patients with a medium-serious health condition, and for more severe cases - we will use invasive clinical respirators of which we have more and more. He said that Chinese experts were satisfied with our therapeutic protocols.
"Strict isolation of each patient is in order. We will have to achieve that. If not, we will have the situation like the one in Italy or Spain, here in Serbia," President Vučić emphasised, stating that we must act more aggressively because so far we have only been defending ourselves.
President Vučić also announced tonight that the pension for March would be paid in full, instead of two instalments as it would be paid in regular circumstances, and in addition - the support of 4,000 dinars. 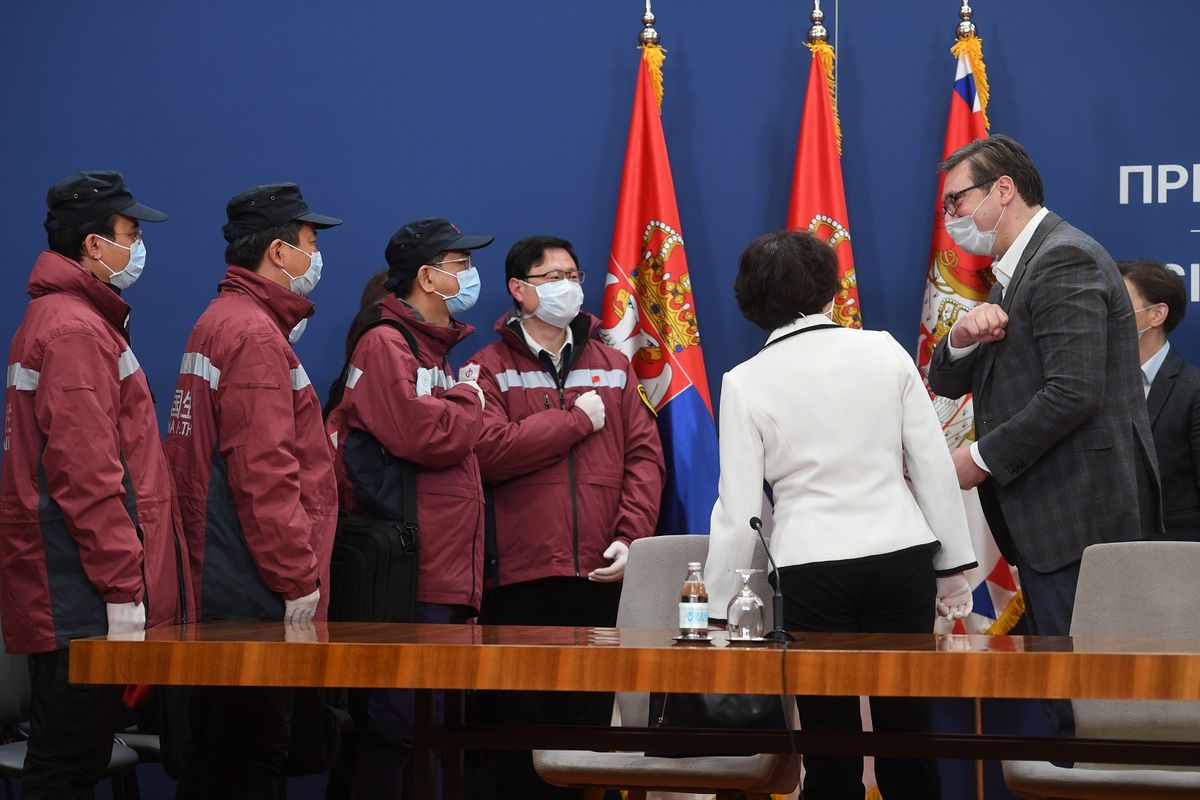 President Vučić appealed again to all citizens to stay at home and thanked all those who keep struggling and working hard, and who are disciplined because the point of all measures is to save lives.
"Everything we do and fight for is worth nothing unless the people in Serbia understand that we need help, that we need more than anything that they stay at their homes," said President Vučić.
"Thank you to the doctors, nurses, workers in the food-processing factories, the pharmacists who work hard to get Serbia ready for this situation as much as possible," President Vučić said and thanked the press for their contribution to defeating the virus.
"Thank you to all the disciplined citizens who love and respect the state. What we do - we do not do because we need it, as some would imagine, but to preserve people's lives," said President Vučić.
Belgrade,
23rd March 2020
Share