On the occasion of the Armistice Day in the Great War, President of the Republic of Serbia Aleksandar Vučić awarded decorations to deserving individuals and institutions that stood out during the fight against the infectious disease Covid-19, as well as to individuals who risked their lives to save others. On that occasion, President Vučić said that with their work, honour and responsibility, they deserved to serve as an example to all of us. 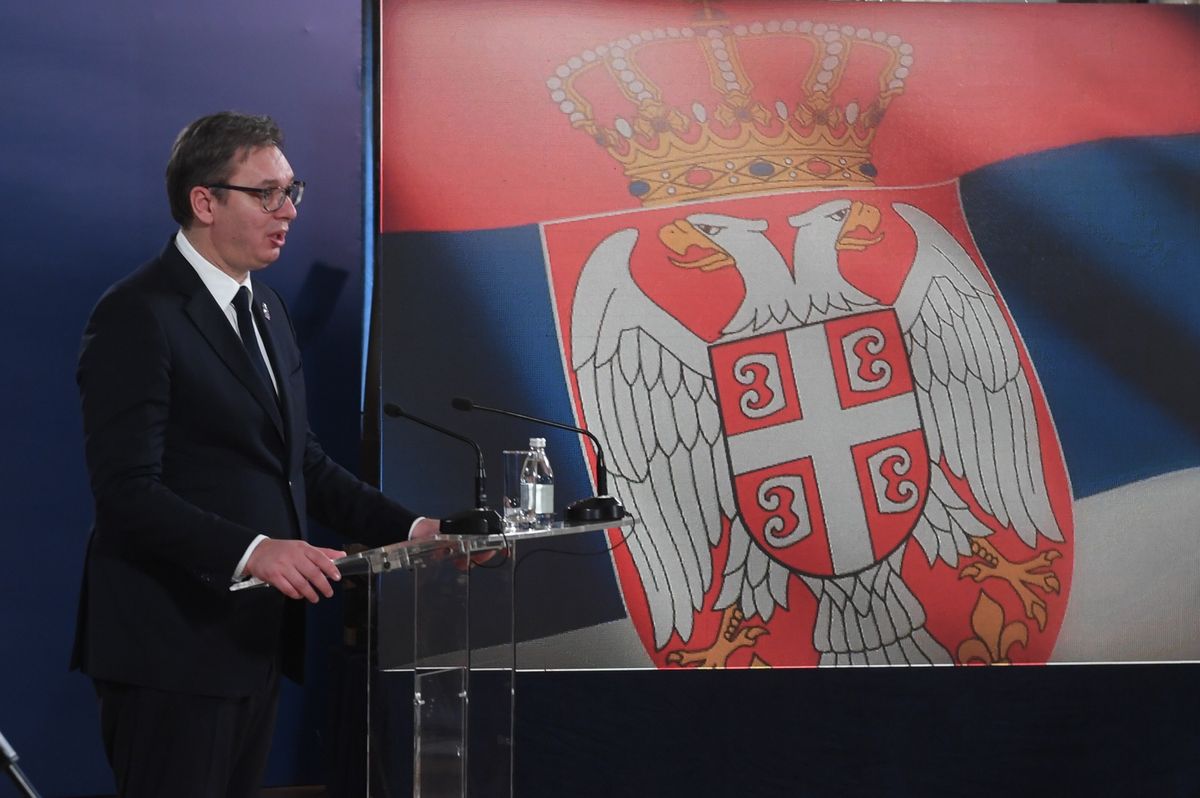 President Vučić congratulated the citizens on today's holiday, emphasising that today marks the time of Serbian tragedy, but also of magnificent victories.
"Today is the time to thank those who gave everything they had, laid down their lives for the homeland, but also those who are doing everything they can today to save the lives of our people," said President Vučić.
He said that honour is a tremendous and priceless bond which society recognises to an individual, but also a debt that an individual feels towards society.
"Being honourable is nothing but continually and unreservedly giving all that one has - and even more than that -to those who need that giving to survive. That is why it is impossible for me today to try to repay the debt we have towards all the laureates ", the President said. He thanked all of them because they are exceptional, honourable people who knew how much to give, without anyone asking them to do that, and to repay their debt to society, the state and the people. 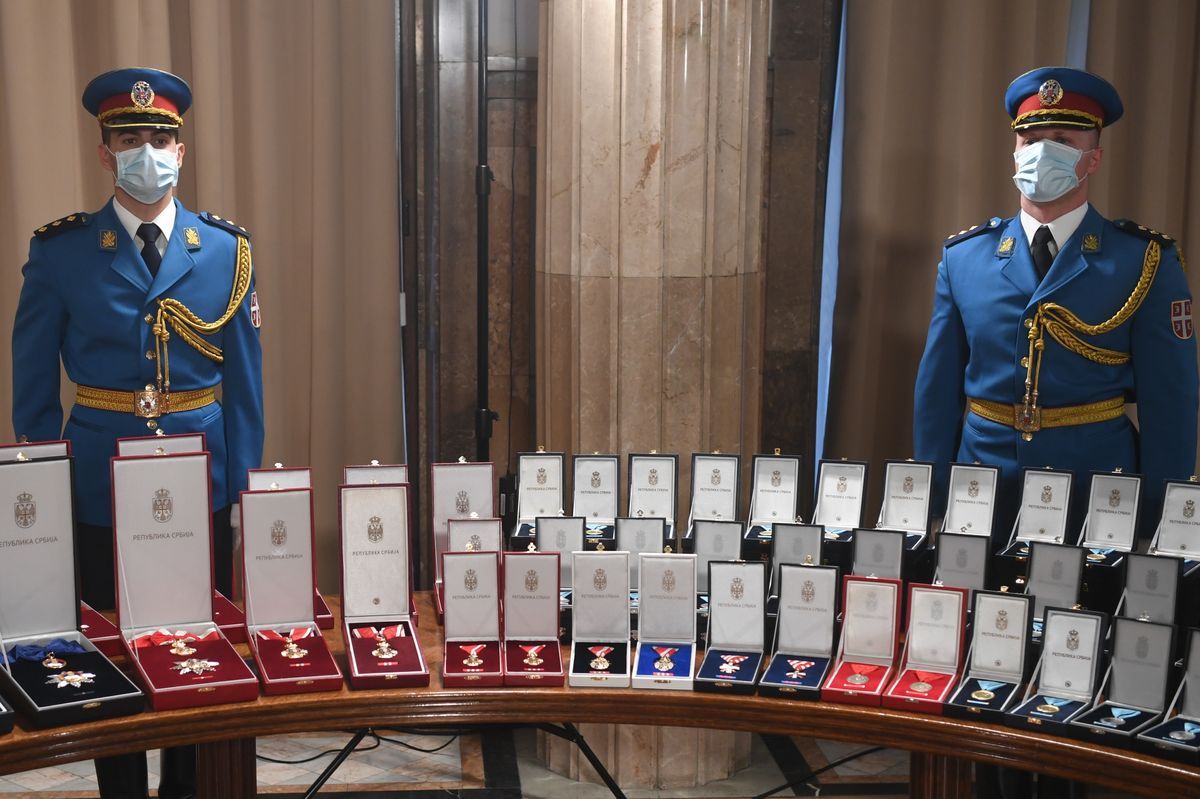 "They gave as none has given before, much more than they owe. I wonder how you could find that strength in yourself, that nothing was difficult for you, that you quietly and without whining provided the citizens with everything they needed", said the President and stated that they could do this because they are honourable and responsible people, better than others, outstanding and exceptional.
"You deserve to remain an example forever," said President Vučić.
There are 101 names on the list of people who were decorated today. However, epidemiological protection measures prevented them from gathering in one place on that occasion, and the President will hand them the decorations a soon as the epidemiological situation allows it.
Names of all the laureates were read today in the building of the General Secretariat of the President of the Republic. In addition to President Vučić, the ceremony was also attended by Prime Minister Ana Brnabić, and epidemiologist Dr Predrag Kon, a member of the Crisis Group and one of the laureates awarded with the Order of Karađorđe's Star. 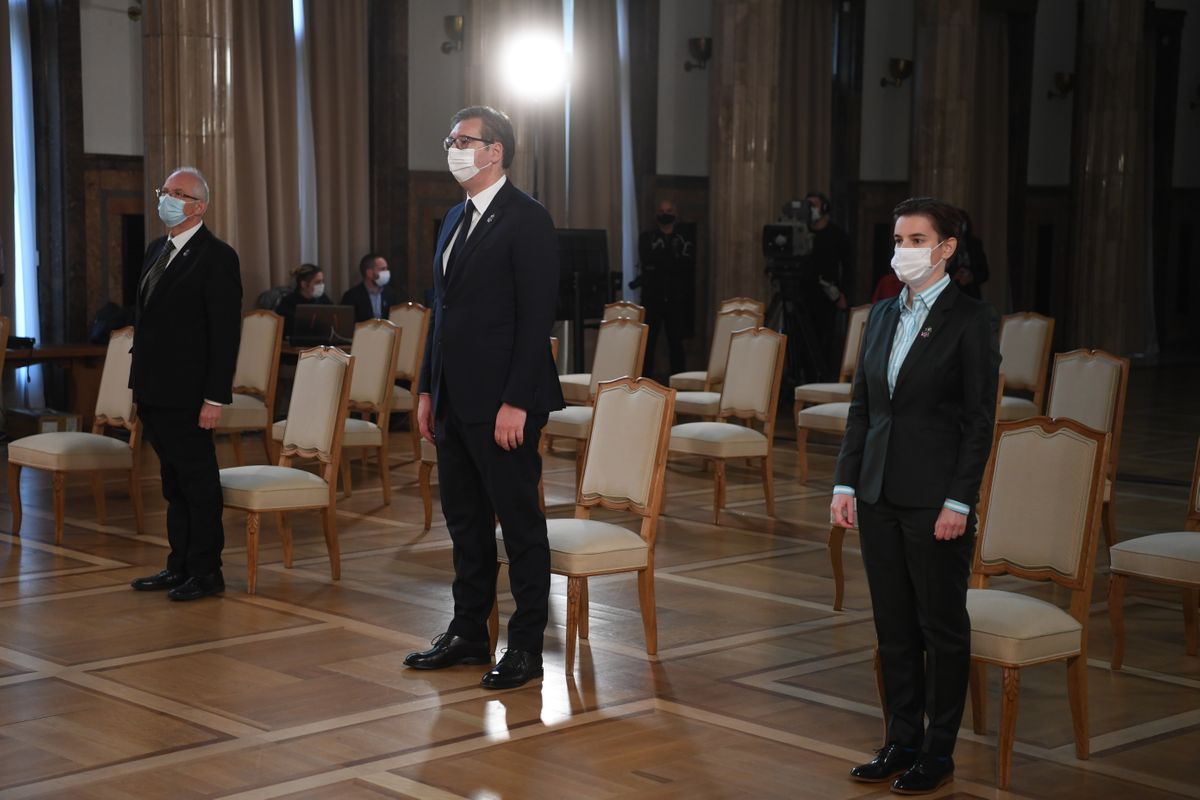 President Vučić said that, as the President of the Republic, he tried to at least partially thank some people who invested enormous energy and fought all the time, often not caring for their health and lives.
"I want to thank you, Dr Kon, Dr Pelemiš, and all the other people who receive the highest possible orders that can be obtained, and say that I know how it was not either easy or simple for any you. I know you were aware that you were doing the hardest job in the country where few will have respect for it. It is always like that. Merely a few want to respect those who know better and more. I am happy that we had people who thought differently in Crisis Group, that you made the best decisions," said President Vučić.
He emphasised that it was not only their professional obligation because they had to go through the heaviest of insults.
"I am also infinitely grateful to many little heroes, and among the people awarded with decorations today we also have cleaners, the people who fought every day, risked their lives, and who defended our country and people in every possible way. You still have a lot of work and problems ahead of you which you will have to solve, but I am sure that you will succeed in that," the President emphasised. 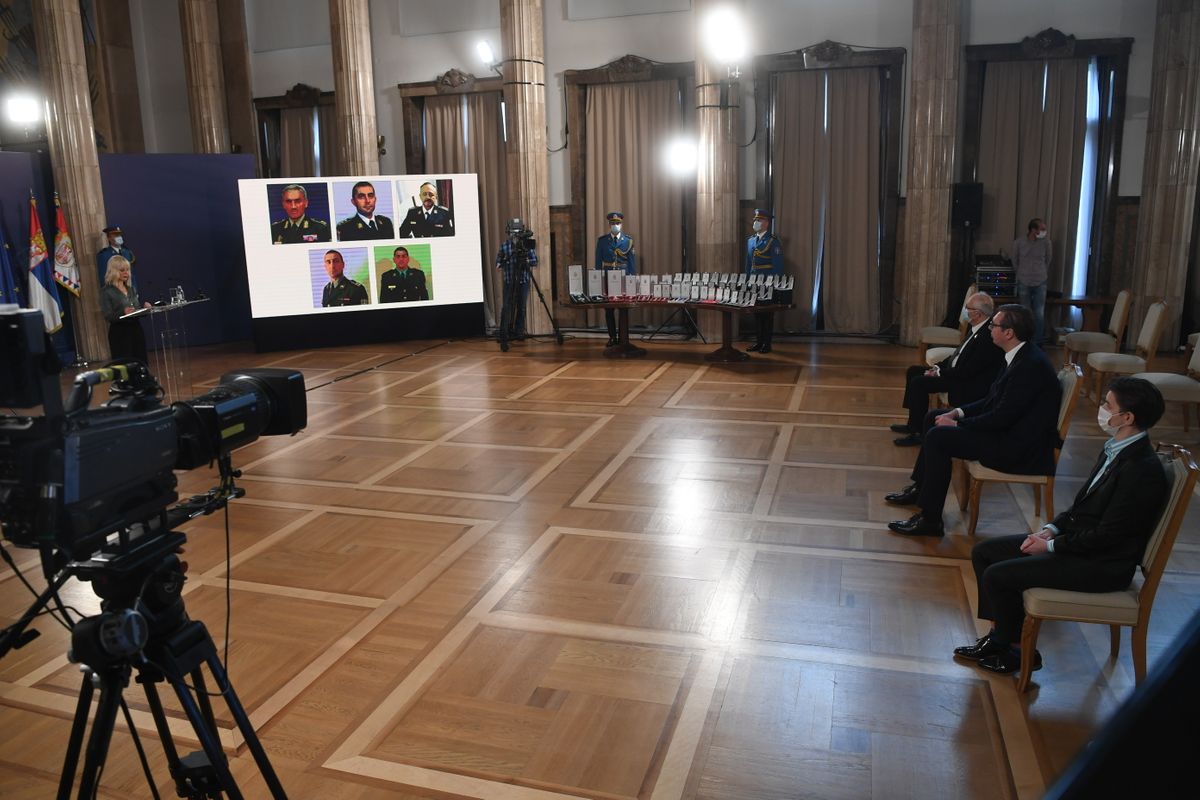 President Vučić said that he decided to award some journalists as well, adding that some were not given recognition and that a mistake might have been made, which will be corrected on the Statehood Day. He explained that some journalists stood out with their daily reporting, entered the Red Zone, wore hazmat suits and tried to inform the public in an accurate and timely manner as to what kind of problem we are facing.
He pointed out that the laureates today are not exclusively those who fought against Covid-19 as there are people among them who risked their own lives to save the lives of the others.
"I thought it was important that before the Statehood Day awarding of the decorations, we should honour them by awarding the decoration for the deeds they performed," he explained. 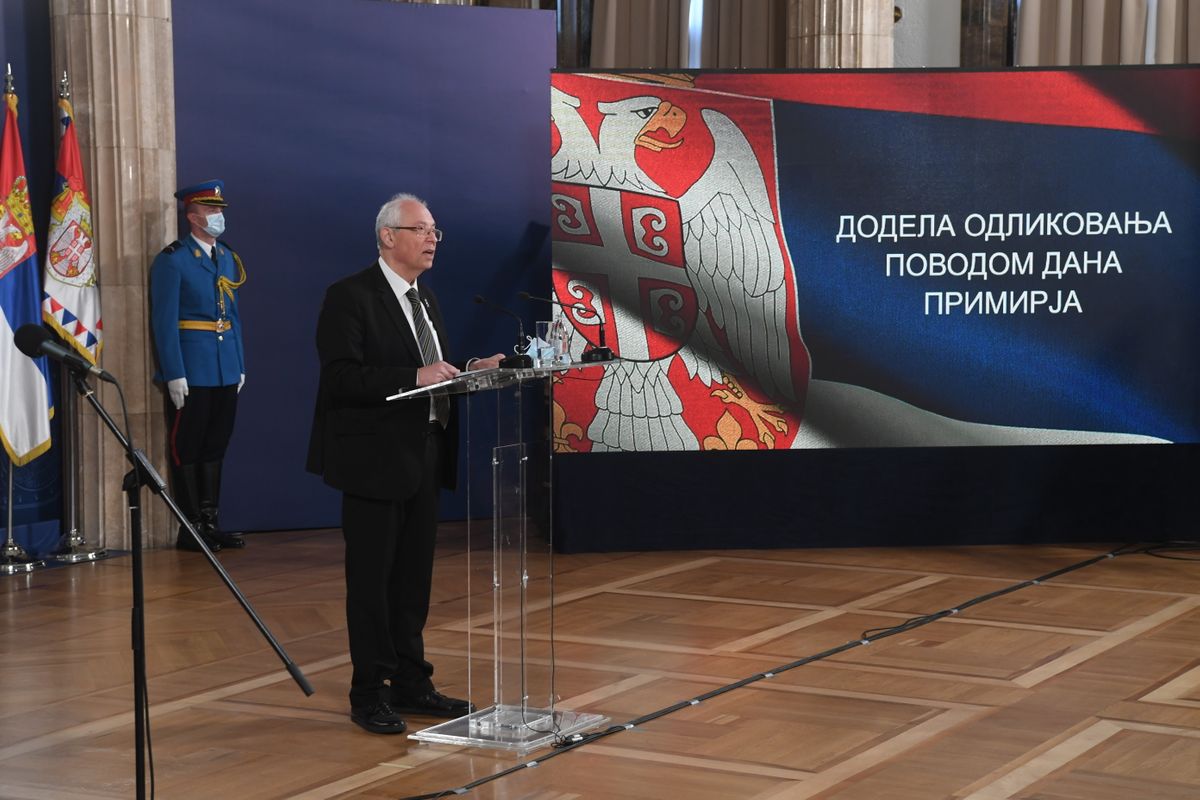 Epidemiologist Predrag Kon addressed on behalf of the laureates. He stated that he was presented with the honour and great responsibility because he is speaking on behalf of all those who showed commitment during the pandemic. He pointed out that this commitment was principally professional, but that numerous non-medical staff also gave their contribution.
"I wish all the awarded laureates good luck and much success, and to remember this day with pride," Kon said, emphasising that even today when the pandemic is in full swing, they find themselves in a situation to defend the lives of citizens. He said that the engagement of the whole of Serbia is necessary and that we cannot make it without each other.
"Today is the Armistice Day that ended the First World War. Symbolically, today is not a day of celebration, but it is a time of honour and a time to turn the situation around in the fight against coronavirus," concluded Dr Kon. 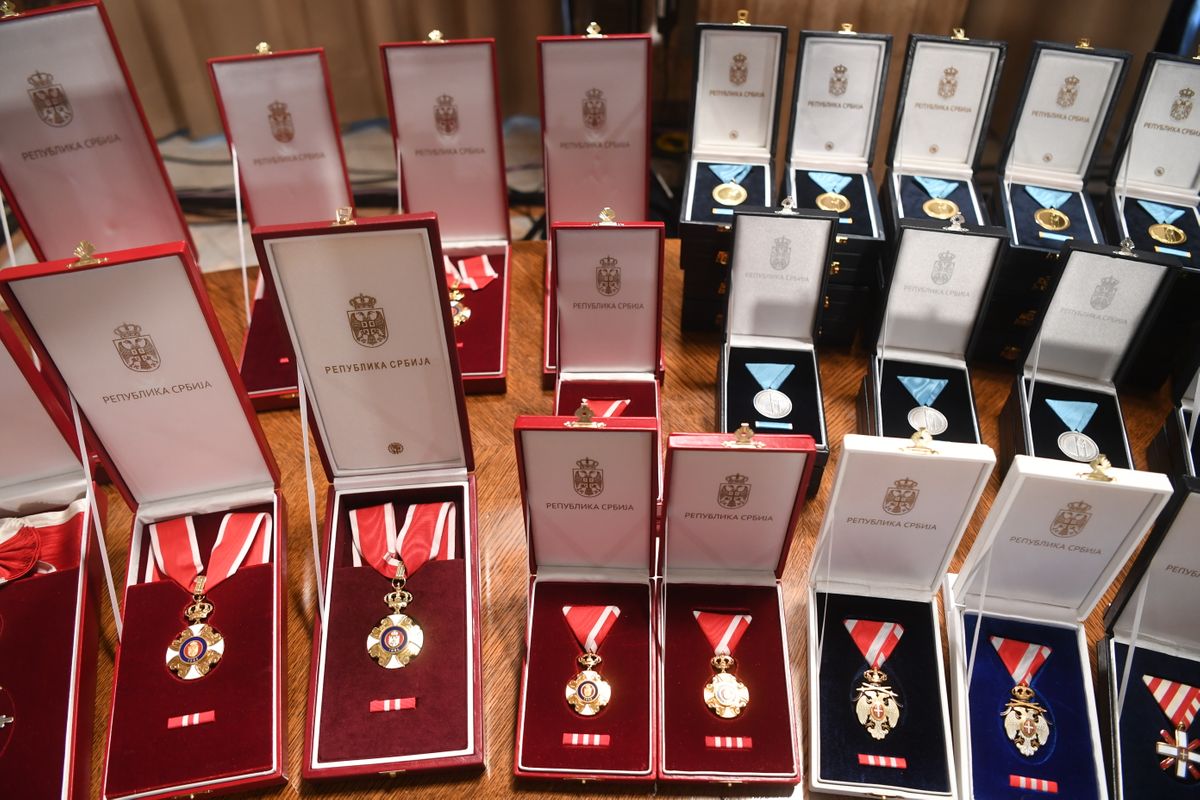