Ground-breaking for the construction of the Belgrade-Sarajevo highway

President of the Republic of Serbia Aleksandar Vučić, President of the Republic of Turkey Recep Tayyip Erdoğan and members of the Trilateral Presidency of Bosnia and Herzegovina Željko Komšić, Milorad Dodik and Šefik Džaferović attended today the ground-breaking for the construction of the Belgrade-Sarajevo highway which should connect Serbia and Bosnia and Herzegovina. 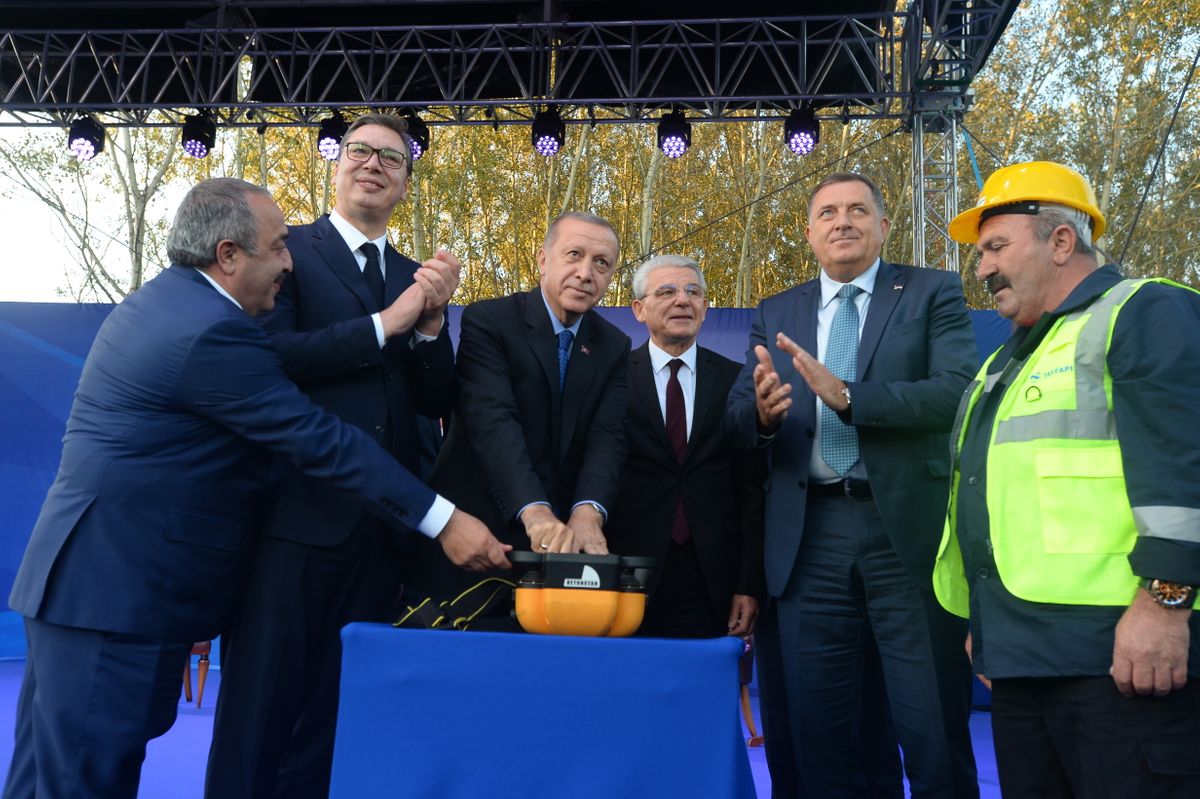 President Vučić said that today's commencement of works on the highway is a historical event, important for the entire region as we begin to connect and open the entire region.
„As of 1945, all the roads and railways, connections and communications we had with Bosnia and Herzegovina have been mostly poor - as if someone was punishing the people who live in this region for who knows what. Today we have the opportunity to show - along with concern for ourselves and our future - that we can arrange our relations. This is the area that was lacking roads, saturated with doubts, fears and hate resulting therefrom. Today we begin to connect and open this region. There is nothing so vital for the Balkans as roads and connecting", said President Vučić. 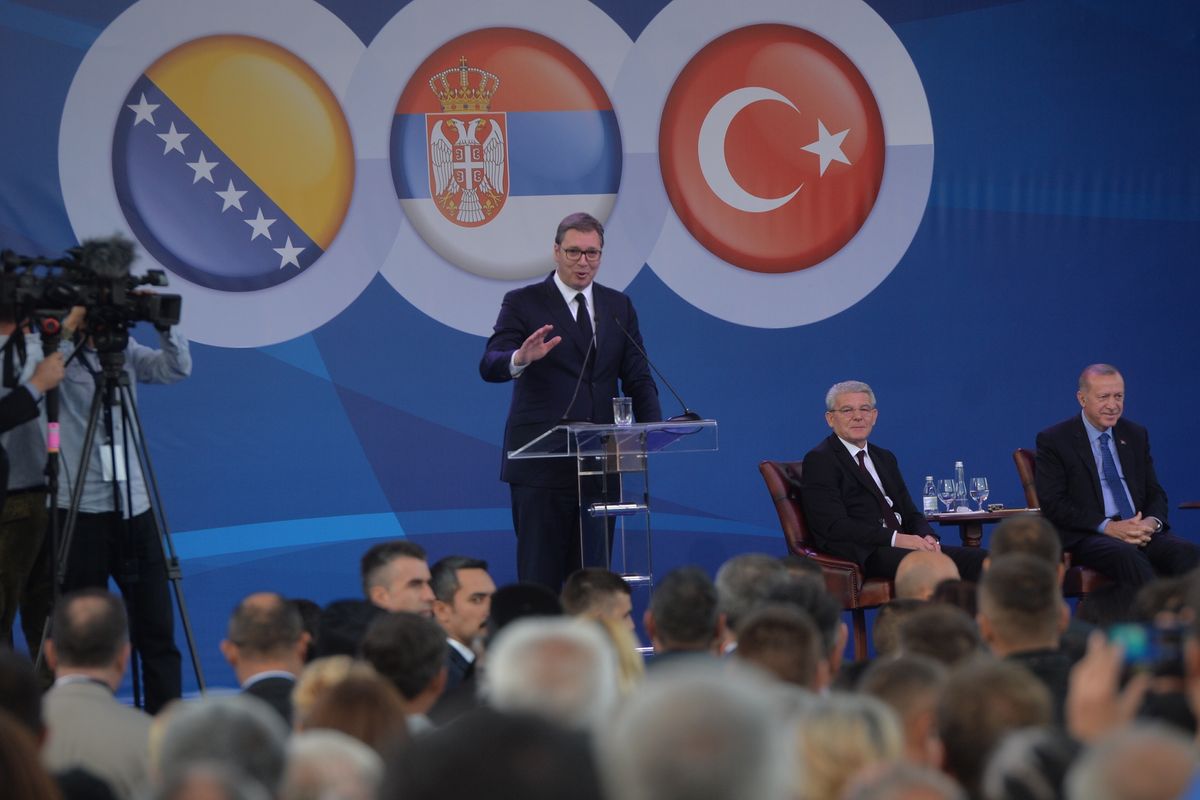 President Vučić said that the roads are necessary so that we can leave the past behind in order to get closer and get to know each other, to avail ourselves with the opportunity to understand one another and in the end to forgive each other without resentment and suspicion.
"On the roads - people meet each other, they care about each other, they help each other and finally they understand how little divides them. On the road, it is possible to do what great Albert Camus wanted for the world - that nobody walks in front and leads, that nobody walks behind and follows, but that people walk side by side. Only side-by-side is the way in which we - the people from this region - can go forward. This is the way for us to become greater, more successful, richer, to help each other", said President Vučić and added that with roads - this area will stop being the black hole in the road map of the world, and added that the roads bring friends such as the President of Turkey Recep Tayyip Erdoğan. 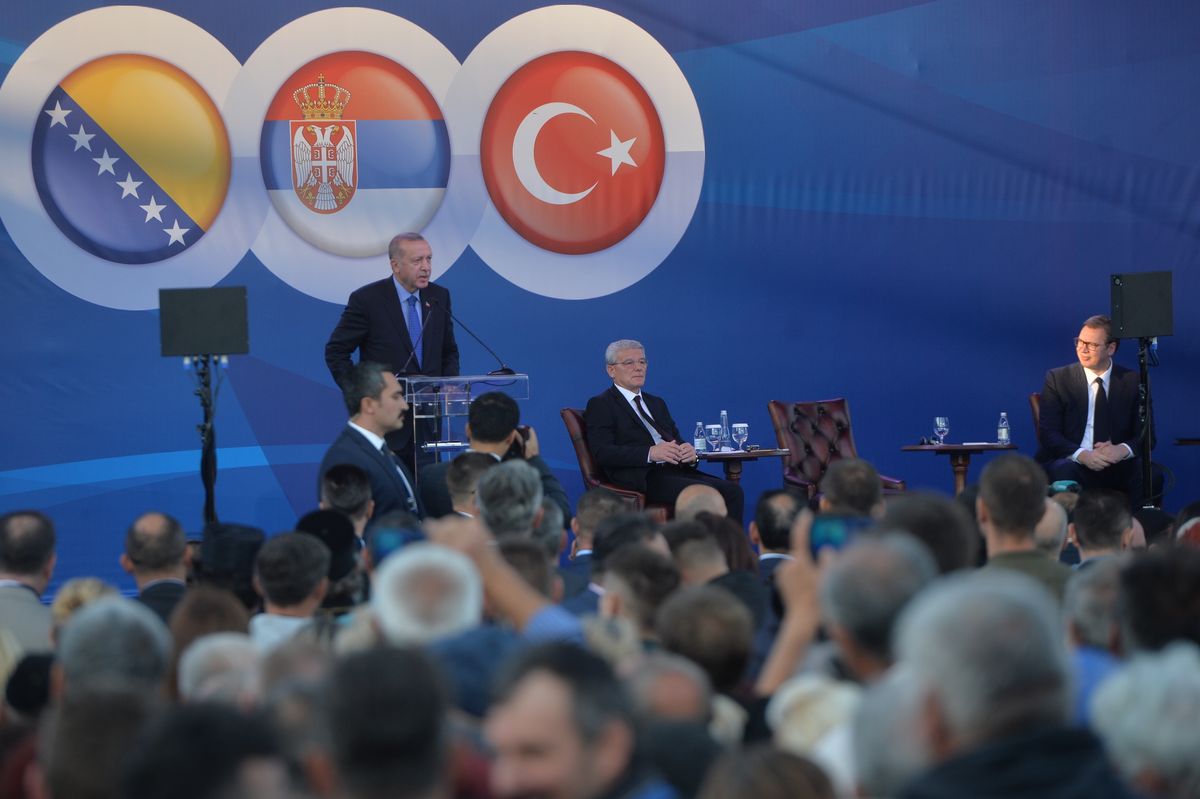 President of the Republic of Turkey Recep Tayyip Erdoğan said that today is a great historical moment for Serbia, Bosnia and Herzegovina and Turkey and that the only objective of Turkey is the establishment of peace and prosperity in the Balkans.
President Erdoğan added that it should never be forgotten that these territories sustained tremendous pain and suffering during the last 25 years and that a hefty price has been paid. "That is why we are obliged to build a better future by not seeing our differences as factors of conflicts, but rather as our wealth", said President Erdoğan. Because of that, he stressed, the cooperation between the countries should be improved and he expressed his belief that a number of joint projects will continue on.
"We are all here today witnesses to one historical moment between our countries and I am very proud because 12 important projects are being finalized today", said President Erdoğan in his address to the citizens who gathered in Sremska Rača. The President of Turkey emphasized that the bridge over the Sava river, whose foundations are laid today, is the bridge of friendship because it indeed carries a special value for the whole region.
President Erdoğan added that he has large expectations from the Turkish company "Taşyapi" contracted for the highway construction that it will execute the project within the shortest deadlines and in the best custom. He also said that the historical and cultural heritage of Turkey and Serbia represent a joint treasure and that each monument in these areas serves as an opportunity for solidarity and cooperation. In that sense, he said that the evidence to this is also the renewal of the Ram Fortress, one of the Danube pearls, which was aided by Turkey through the TIKA agency and which should contribute to the increase of the tourism potentials in the region. 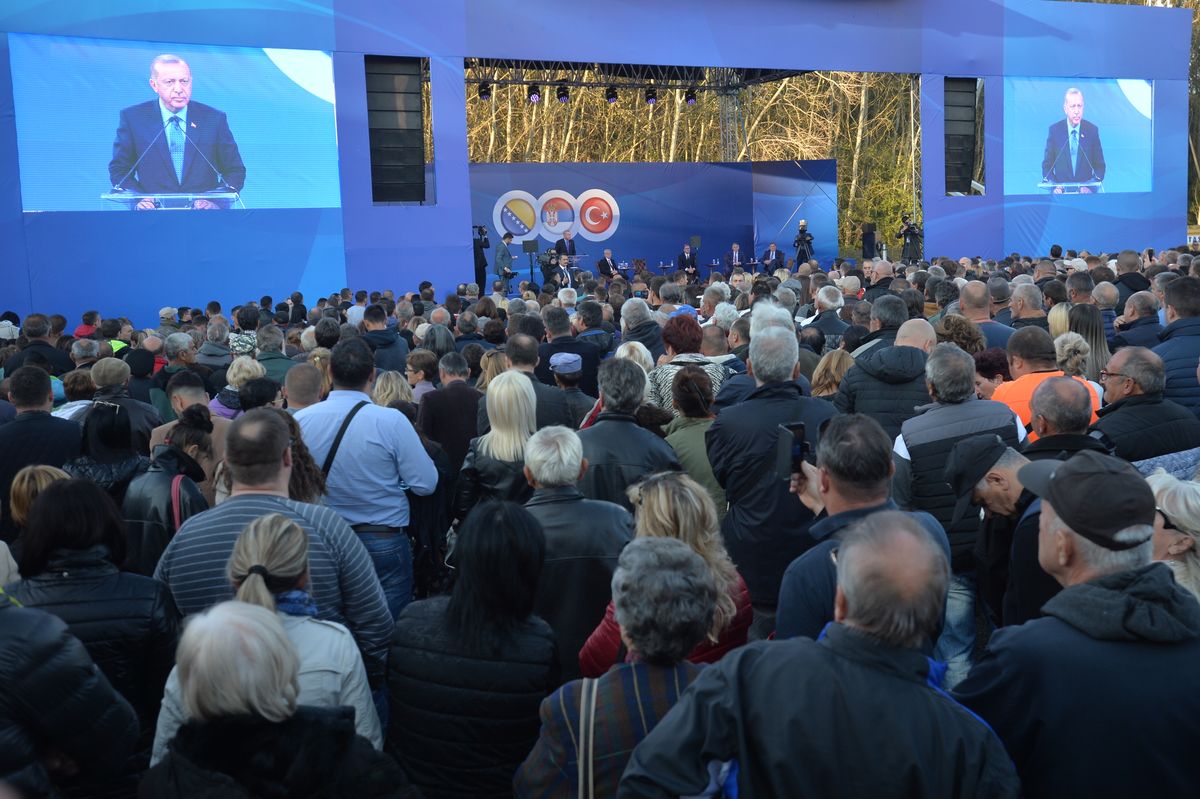 President Erdoğan also underlined the today's ground-breaking for the construction of the Novi Pazar - Tutin road. "I want all the investments to be beneficial to all of us. Turkey will continue to increase its investments across Serbia", said President Erdoğan and reiterated his gratitude to President Vučić for his hospitality.
The Chairman of the Presidency of Bosnia and Herzegovina said at the ceremony of the construction launch of the Belgrade-Sarajevo highway, that this transportation-communication road represents the symbol of the future relations between Serbia and Bosnia and Herzegovina and the friendly ties between the peoples and the countries. "This is both - the highway and communication, but also the symbol of the friendly ties between our people and our countries", said Komšić and added that he hopes that the next year the same ceremony like this one will also be held on the other side of the river.
Komšić said that until two years ago it seemed impossible that the relations between Serbia and Bosnia and Herzegovina will be at such level and that after many decades they will finally endeavour the construction of a large infrastructure project. He said that the highway will not be useful only for the citizens of the two countries, but also that it will mean a lot for the relations between them and that it bears a concrete and symbolic meaning. 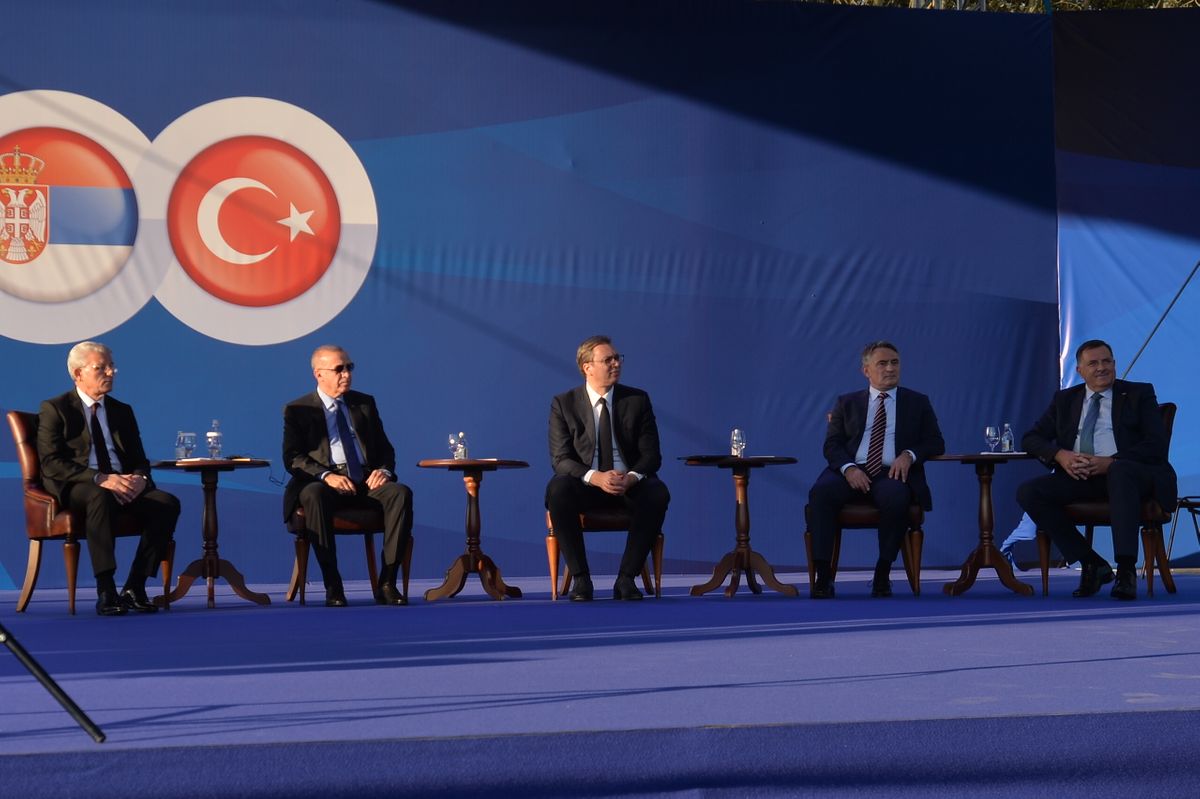 Komšić also pointed out that until several years ago it was impossible to imagine that such a large number of people will gather at the ground-breaking event as it gathered today. "You know all about us who stand and sit here on this stage, but with our presence, we wish to show how little of the trust, outstretched arms and a smile are necessary so that the things in our countries and in this region can fast go for the better", said Komšić.
The Bosniak member of the Presidency of Bosnia and Herzegovina Šefik Džaferović congratulated Serbia for completing all - generally complicated - procedures for the construction of the Belgrade-Sarajevo highway and expressed his hope that Bosnia and Herzegovina will accomplish this as well and as soon as possible so that the two cities and the two countries can get connected fast and in the best way.
This is the moment, he said, of the construction of something that leads the entire region into the peace, stability, prosperity and development.
Džaferović thanked the President of Turkey Recep Tayyip Erdoğan for recognising that he can help this region. "Turkey plays a very important, stabilising role in the region, it helps everyone as much as it can so that people can connect and live normally", he said. 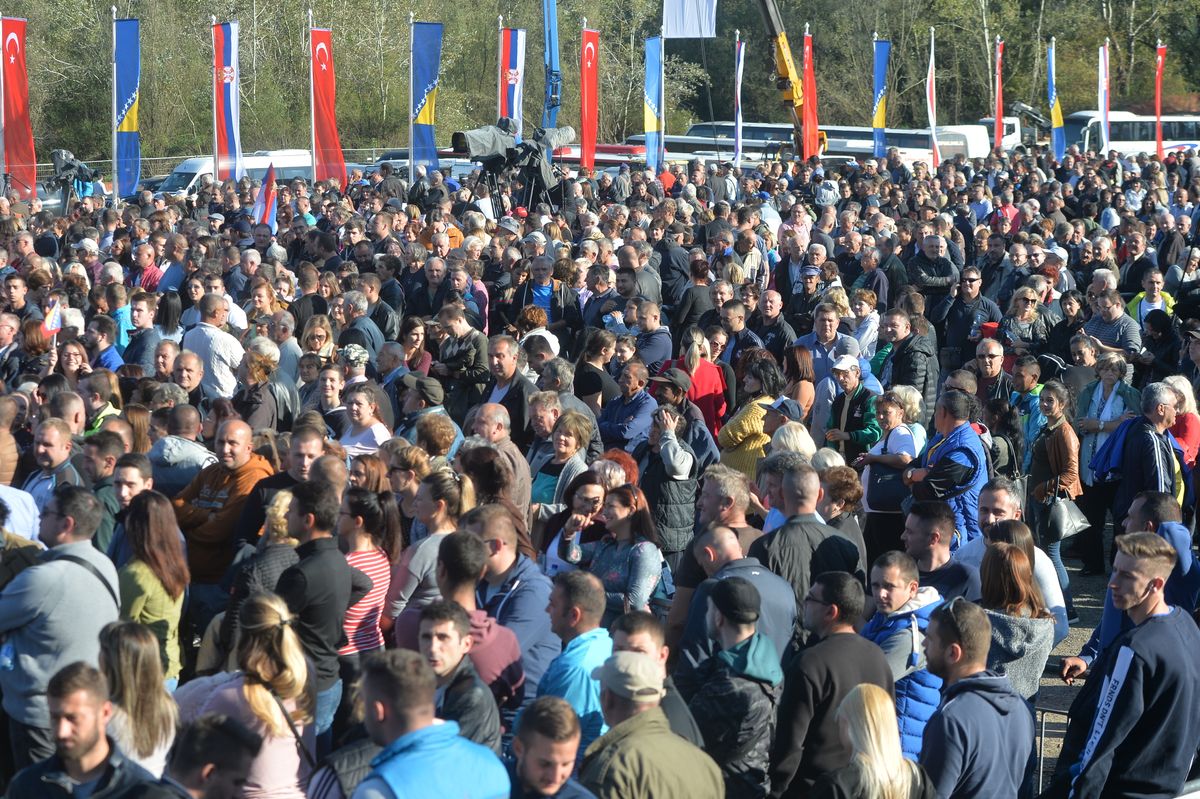