Official visit of the President of the Republic of France

President Vučić welcomed President Macron at the “Nikola Tesla” Airport where the two Presidents ceremonially unwrapped a board thus marking the beginning of works on the airport modernisation to be carried out by the company VINCI Airports. 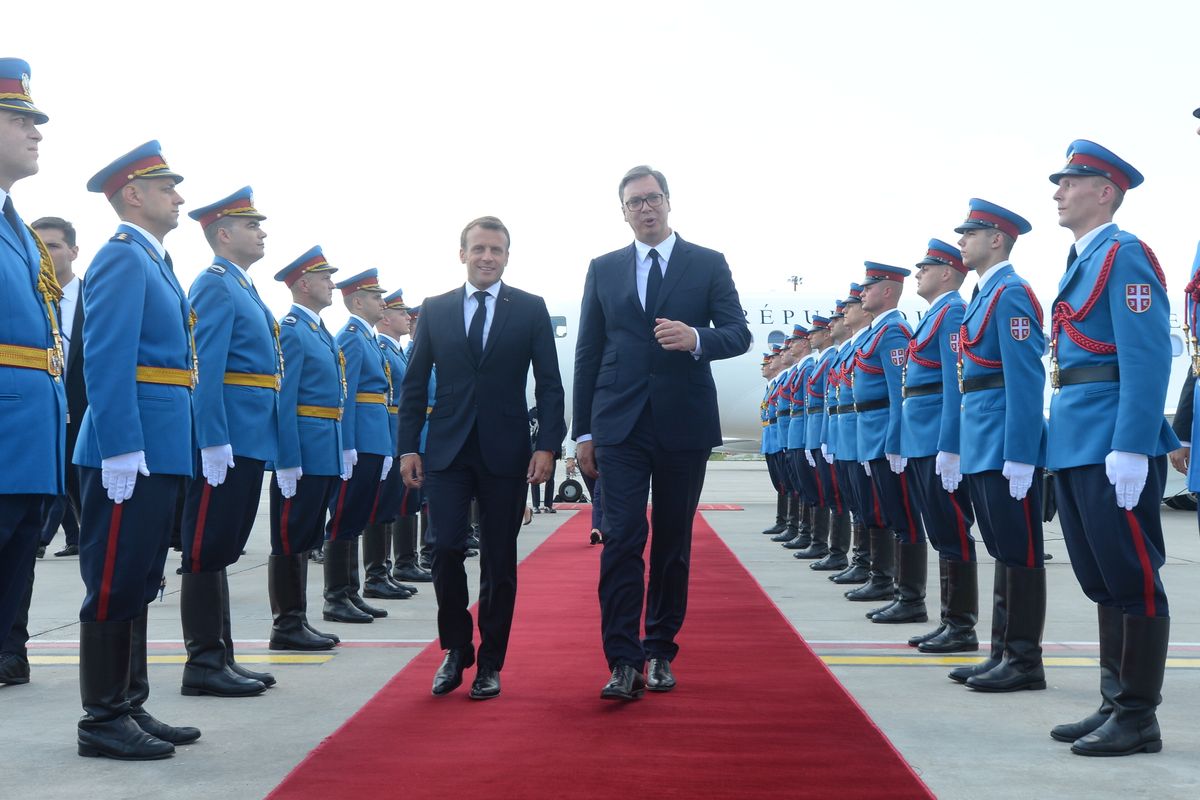 President Vučić pointed out this was only the beginning of splendid cooperation between Serbia and France. He also thanked President Macron for his trust in Serbia and for his encouragement of investors to come to our country. „I am very honoured as the President of Serbia for the opportunity to host you today and tomorrow in Belgrade and Serbia”, said President Vučić.
President Vučić added that the citizens of Serbia are very hospitable people and that the visit of President Macron has been expected with huge consideration, hope and delight. „We do expect much in the future, but above all – thank you for coming to Serbia, thank you for bestowing your respect to Belgrade and I am convinced that the French-Serbian friendship will reach new levels, the ones we used to have in the past and the ones we wished to be restored one day. We would not manage any of this without you, without your energy, persistence, hard work and desire to return France to this region. We, Serbs and the citizens of Serbia, are very loyal people and we know how to respect such type of attention, and France can count on Serbia as its trustworthy friend and ally", said President Vučić. 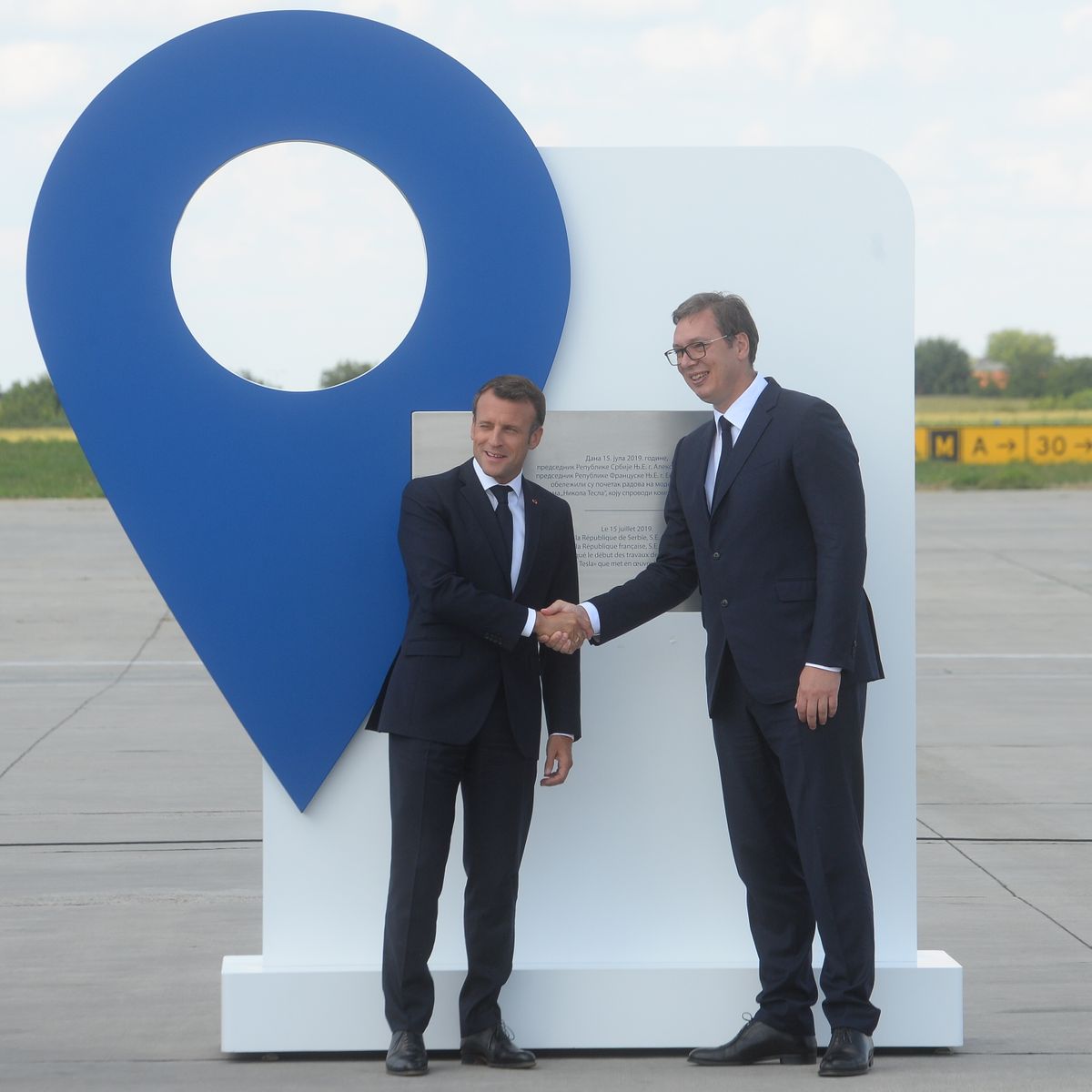 President of France Emmanuel Macron said he came to Belgrade today "to turn a new page", to affirm the friendship and build new partnerships with Serbia.
"We wish to turn a new page together", said President Macron at the “Nikola Tesla” airport upon landing in Belgrade. He added that not one president of France visited Serbia in 18 years which – as he stressed out – was too long a period.
President Macron said that members of his delegation were artists, cultural workers, economists, who demonstrate that France wishes to open a new page of bilateral relations in the uncertain geopolitical context.
"Our ties with your country are very important”, emphasised President Macron and added that our common past will be discussed but also our future. He said this is the moment of our joint history which is very significant and which contains several symbols, that this year is very special and that we commemorated the end of the Great War when the people of Serbia and France fought together for freedom, and that this year also outlines the 180th anniversary as of the establishment of diplomatic relations between the two countries.
"This is our joint history, lengthy history, something that obliges us for the future", said Macron.
A ceremonial welcome in front of the Palace Serbia was organised in the honour of President Macron with the intonation of both countries’ national anthems, artillery salvo and review of troops. 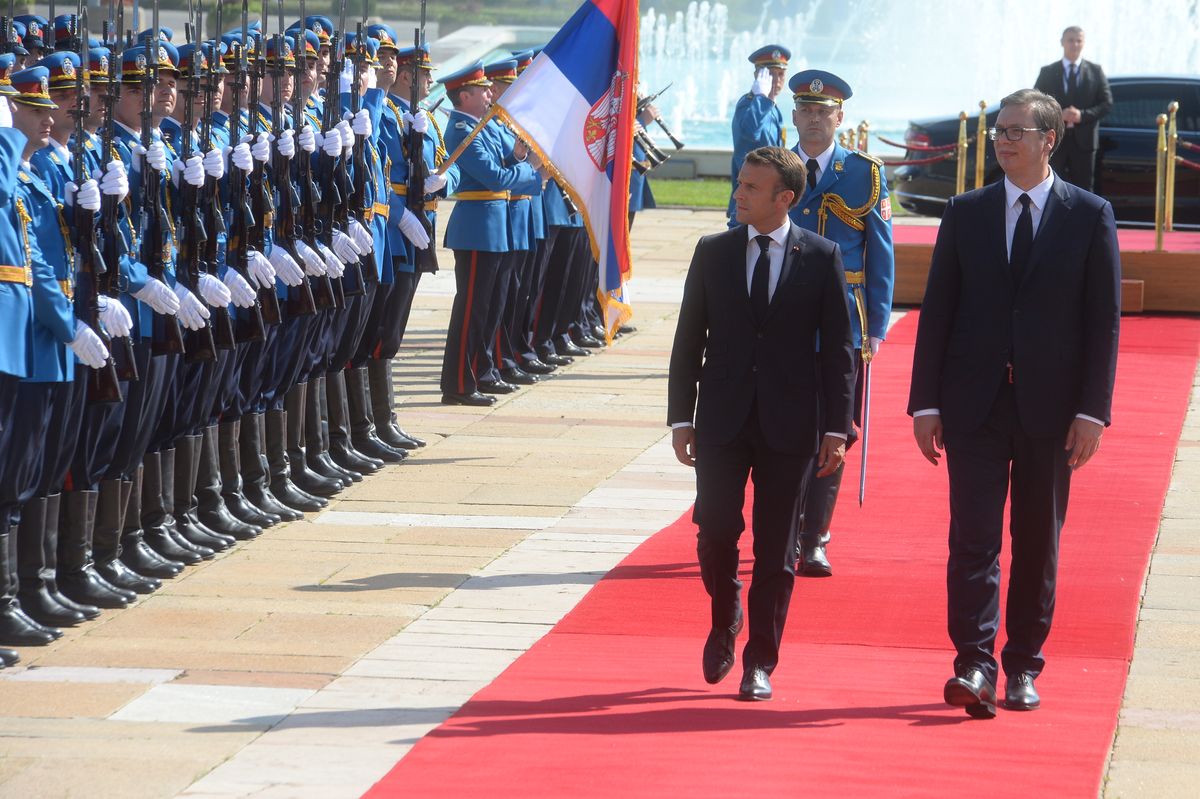 Prior to the official bilateral talks in the Palace Serbia, President of the Republic of Serbia Aleksandar Vučić showed President Macron a globe – a gift from the former President Francoise Mitterrand. The model of a globe from 1985 President Mitterrand gave as his present to the chiefs of the states with which France cherished good diplomatic relations, and the SFR Yugoslavia was one of them. 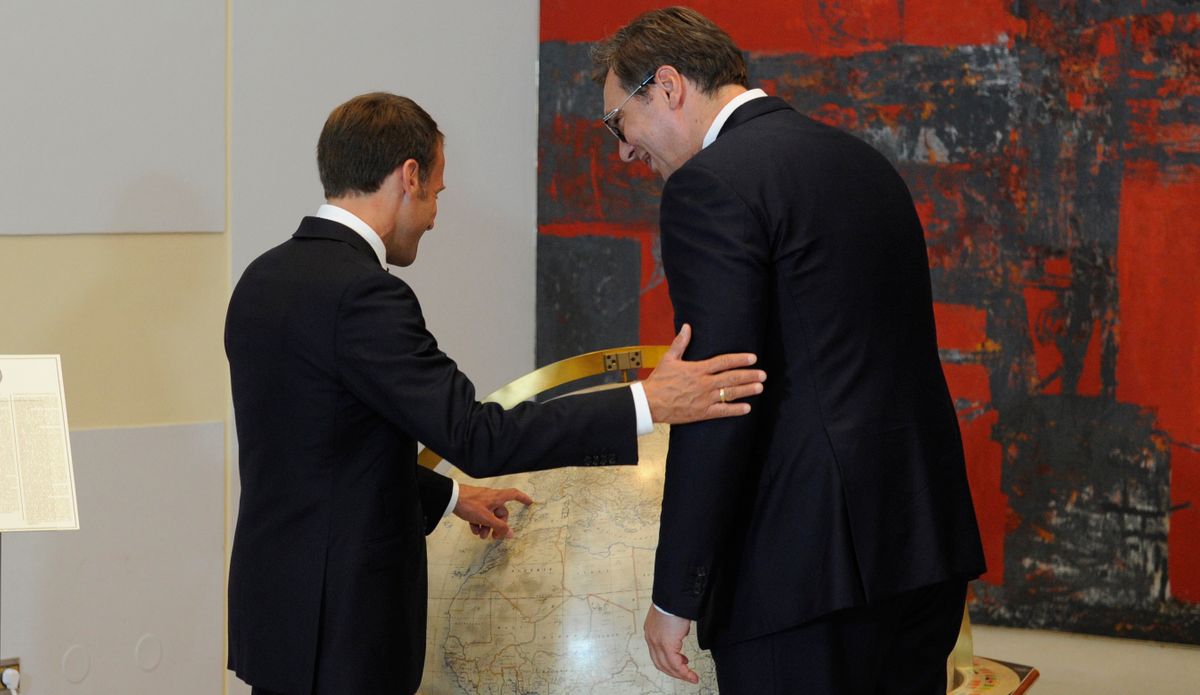 President Vučić and President Macron exchanged five signed bilateral agreements in the presence of both countries officials, representing a part of the 22 documents' package from various areas from the economy, infrastructure and armament to the military industry and culture.
Some of the signed agreements are The Declaration of Intent regarding the Belgrade metro project between the Governments of France and Serbia, and the City of Belgrade. The Declaration acknowledges France as the strategic partner for the realisation of this exceptionally important project, and it was signed by the Minister of Finance, Mr Siniša Mali, Minister of Construction, Transportation and Infrastructure, Mrs Zorana Mihajlović, Mayor of Belgrade Mr Zoran Radojičić and the Ambassador of France H.E. Frédéric Mondoloni.
In his address to the public, the President of the Republic of Serbia Aleksandar Vučić pointed out that it was a great honour for him to host as a guest in Serbia the President of the Republic of France Emmanuel Macron, and that he wishes to express his gratitude for the great honour and admiration he conferred to the Republic of Serbia and its citizens.

„We have had very extensive talks today, I think that never or almost with none before I had such a long tete-a-tete conversation as I did now with President Macron, and it is possible that I have never had such an open and straightforward talk with anyone. I have listened to President Macron regarding all the important questions both regional and European, and I learned a lot from him. I have presented our problems, above all related to the Kosovo knot. I told him the truth and I pleaded for the assistance of France in both – our European path and in solution to the Kosovo-Metohija crisis. We talked about what was going on in Berlin and about what has not happened in Paris and about all the other efforts we will have to invest in the upcoming period. We discussed the economic cooperation and it is becoming better and better, two agreements have been signed today on cooperation between some French companies and employment of new people, highly educated young people, and we will seek to accelerate all the activities and processes on our part. It is primarily the construction of the metro as it is a large infrastructure project", said President Vučić.
President Vučić noted that he was talking with much concern for his country and in hope that strong France and a strong and powerful President such as Mr Macron will be of assistance to our country and our people.
"I am not a daydreamer, but I am convinced that the energy and political enthusiasm of Macron can change much on the European continent and can help our country a lot", said President Vučić.
President Macron said that Serbia is a major European state and nation, and stressed that the EU must reform itself to be ready to admit Serbia. He said that Serbia should keep to its sovereignty, and pointed out that he also holds to the sovereignty of those who respect it. He said that Serbia is part of the EU accession process and that the European Union must make some decisions to operate in a better way.
"In parallel with the reforms that Serbia needs to implement, the EU has to reform itself to be ready to receive Serbia," Macron said.
President Macron added he will engage in a renewal of the dialogue between Belgrade and Priština aimed at the achievement of a comprehensive and lasting agreement where Belgrade and Priština would reach a compromise.
With the intonation of the song "There, far away", the French and Serbian presidents laid wreaths at the Monument to the Belgrade Defenders in the First World War. 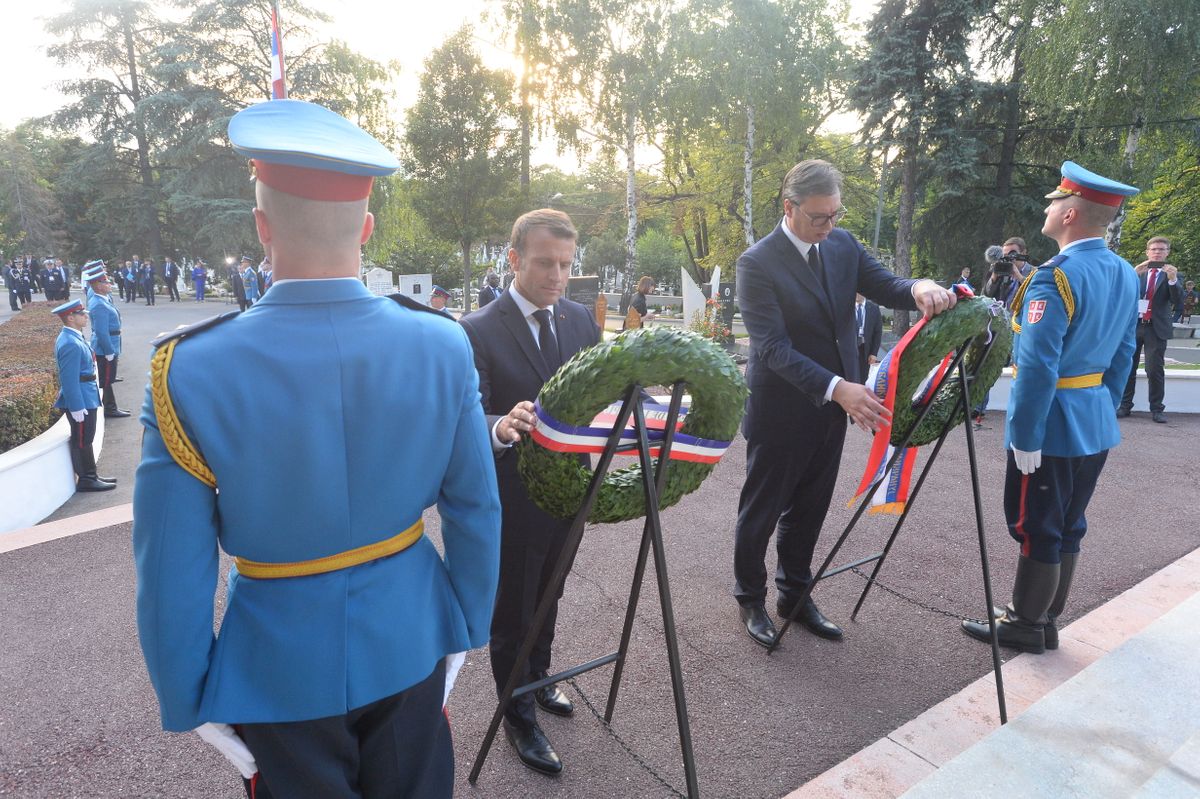 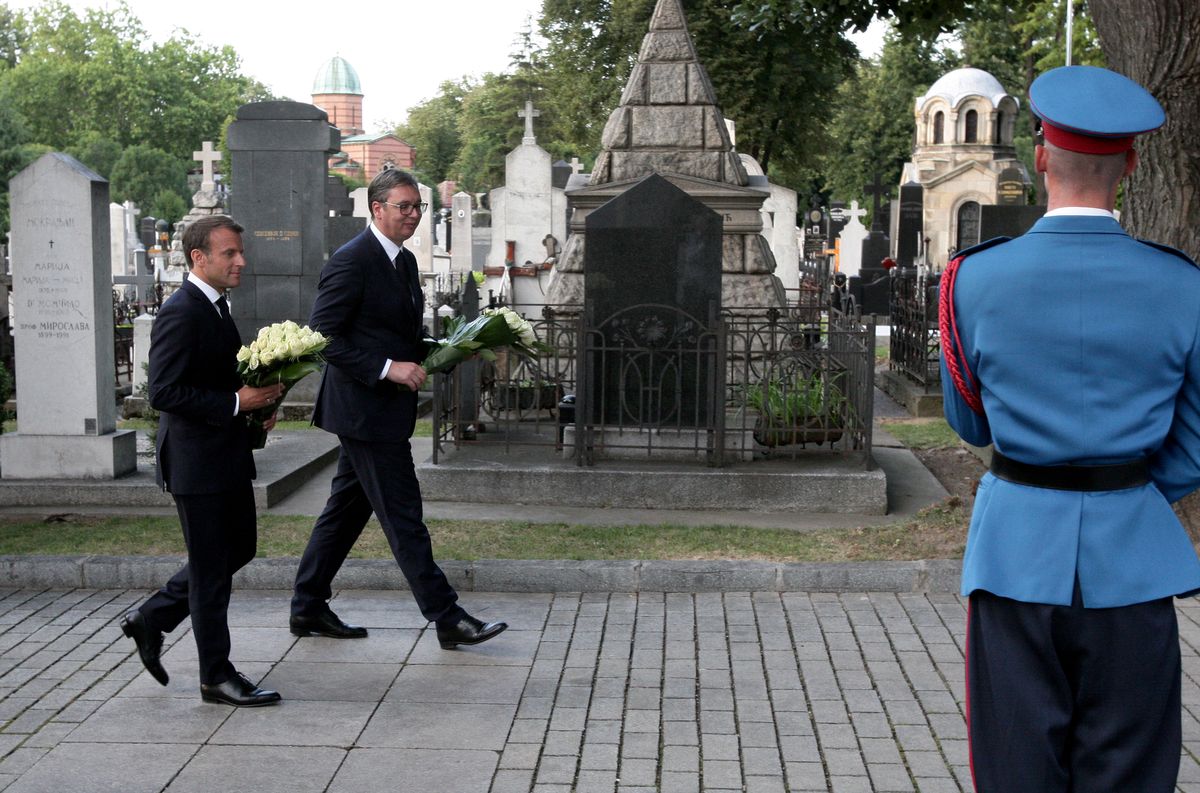 With the intonation of the national anthems, the two presidents laid wreaths at the Monument of Gratitude to France at Kalemegdan, after which they addressed the gathered citizens. 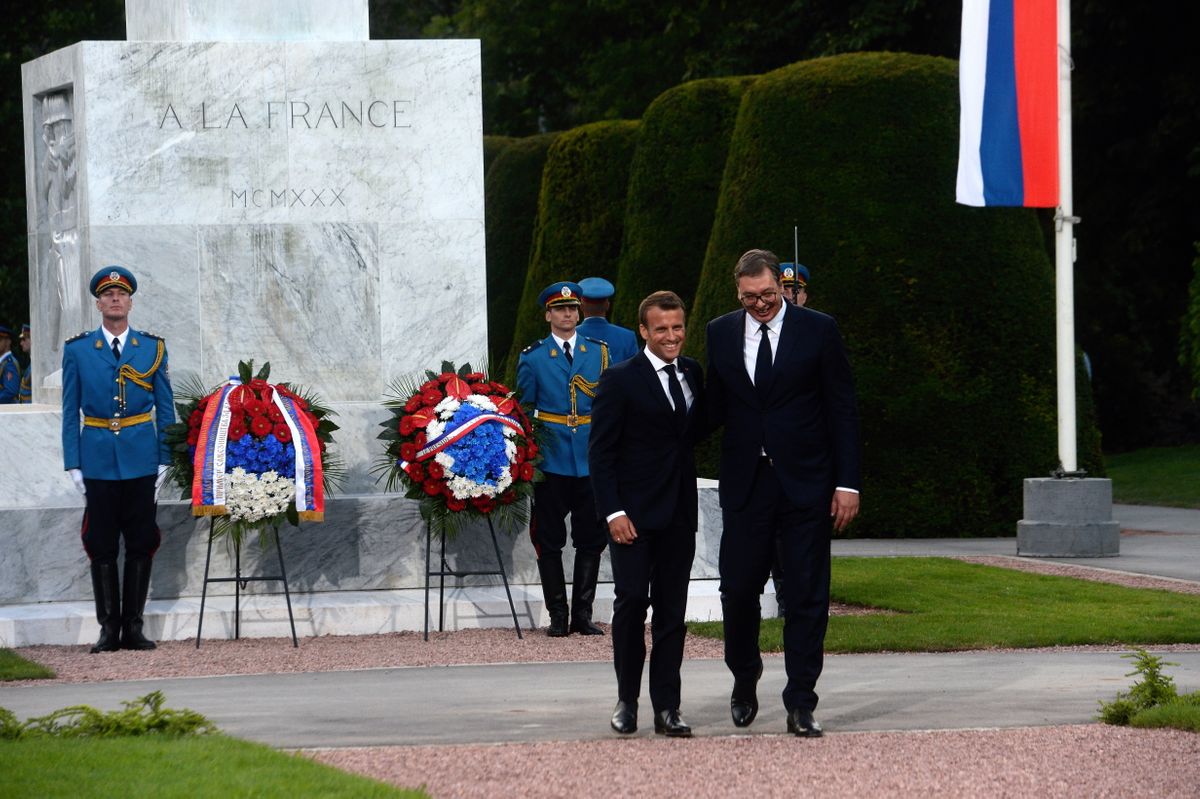 In his address in front of the Monument of Gratitude to France, President Macron thanked everyone - the President of Serbia, members of the government, Belgraders, Serbs and the French, who gathered in such a large number, and, greeted by a thunderous applause, said:
"Thank you, President, for an extraordinary welcome and thanks to all of you who came in such a large number, we are deeply touched. You prove that the message inscribed on the Monument of Gratitude to France which reads "We love France as it loved us" is true even a century later on. In the name of my country, I am telling you that France loves you, just as you loved it".
President Macron said that France knows what it owes to the martyred and daring Serbia from the time of the Great War, what it owes to its soldiers who died so that we can live in freedom today. "France will never forget the sacrifice of the Serbian people, the temptations, the tears of mothers, the moaning of the fathers, the inexhaustible pain of the survivors," said President Macron in the Serbian language.
France is well aware, says its President, of what it owes to its soldiers who died so that we can live in freedom and iterated that such sacrifice will never be forgotten.
"France knows that the fate of Europe has been written on this soil, we fought together on the Salonica front. Europe knows that the Serbian nation is a great European nation with which we will create our future."
President Vučić said in his address to the citizens that Serbia is grateful to the French President Emanuel Macron for saying that our country rests in his heart and that he won the hearts of the citizens of Serbia with his sincerity.
He evoked the words of King Aleksandar Karađorđević uttered in 1917 that Serbia had fallen, but that the Serbian army did not fall and that it went with the French, to death or glory.
"And we went to glory and - we won, together with you. And we want to be winning in the future together with you," said the President of Serbia.
President Vučić added that he and his French counterpart today agreed on what is important for the citizens of Serbia, but above all, about mutual trust and friendship, about the need to hear and listen to each other, and that Serbia will not seek out anything else, nor something that could harm France.
"If we want to be a part of Europe and the world, we have to change ourselves. We have brought the country out of the economic crisis, bankruptcy, and we will go ahead in that, but we will have to change the way of thinking, we will have to listen and hear others, as Macron aspired to hear us today," said President Vučić.
President Vučić asked the public to respect the policy that is not easy, which does not imply easy promises and fulfilment of such promises than those that will provide our children with future, peace, and stability. "This is the policy I am seeking for Macron to support, and for which I will always seek your support," President Vučić emphasized. 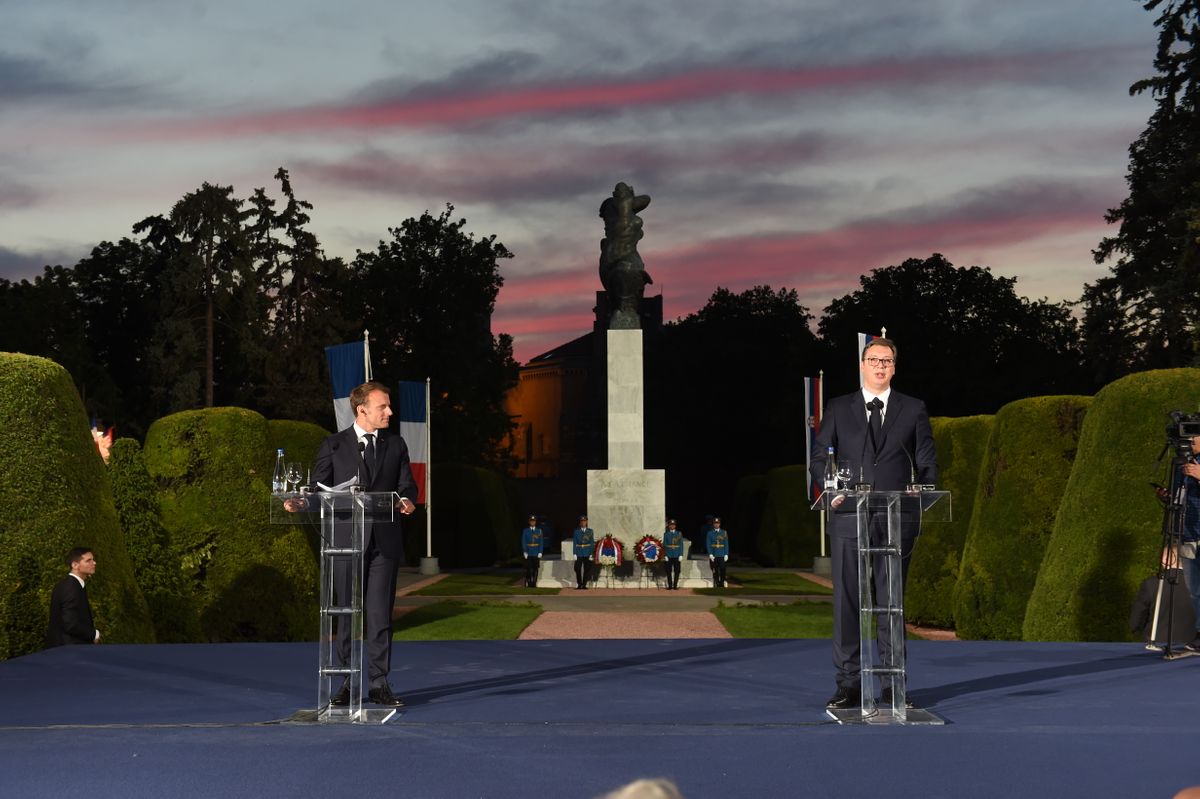