President of the Republic of Serbia said earlier today that the commencement of construction of a new plant facility Aglomeracija of the HBIS Group Serbia in the steel factory Železara Smederevo signifies an important investment, and extended his gratitude to the Chinese friends for their investments in Železara. 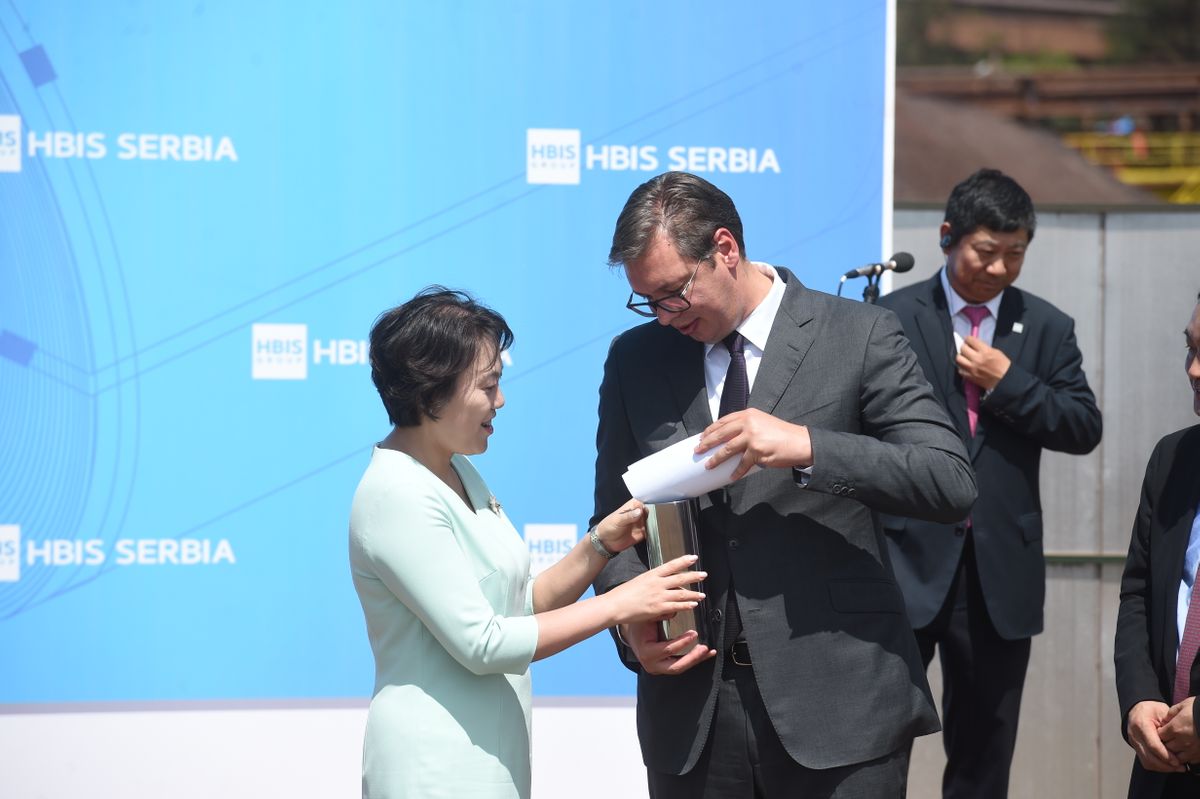 "This is a great day for me. We could not provide the investment of 120 million dollars because it is a large amount of money which we now have as we found the best and the greatest of friends", emphasised President Vučić.
President Vučić noted that the President of China Xi Jinping visited Železara and that he was fascinated by the hospitality and cordiality of the workers.
President Vučić added that over 5.000 people work in Železara now and that in the course of the previous year 269 young people got employed, while 501 people were shifted from the fixed-time contracts to the full employment contracts.
"All this tells about the commitment of HBIS and China and Xi Jinping aimed at the success of Železara. You know that conditions for business operations of a steel factory are not easy including the EU system of quotas. We would not be able to manage any of this without the dedication of the Chinese leadership and friends", said President Vučić at the ground-breaking ceremony for the new plant facility.
Smederevo is my passion and my job, but it did not have to be the passion and the job of Xi Jinping, said President Vučić and iterated his gratitude to the Chinese President for all he did.
President Vučić pointed out that these 120 million dollars indicate that the investments will continue, that everything that now looks time-worn will soon disappear and that we will have the state-of-the-art factory that will keep the pace with the most up-to-date factories of the world.
President Vučić said that only Serbia feels secure irrespective of the course of events in the steel market.
„This is not only the question of consideration for the workers of Železara, but also the concern of entire Serbia. From a factory that was producing only losses and problems, Železara has grown into the largest exporter in Serbia. I am convinced that Železara will become even bigger and stronger as soon as the political conditions in the world become more beneficial", said President Vučić.
President Vučić indicated that when we faced problems and strains, the Chinese did not come to him to say "It's too hard for us, we are leaving". They rather said - "We will fight together, we will fight together in Brussels".
“That guarantees for the future of Smederevo and Serbia", said President Vučić.
President Vučić asked the Ambassador of China Chen Bo to convey the invitation to the President of China Xi Jinping to come again to Belgrade and promised that even more people will welcome him than the last time when he visited our country.
„He deserved that, and Serbia will maintain its support to China even more audaciously and earnestly than much bigger and stronger than us do", emphasised President Vučić.
“It is very important for us to attest that we are capable of changing ourselves, of changing the old facilities for the new ones, of taking part in technologically most innovative processes, and keeping the pace with the most successful ones in the world", added the President.
President Vučić addressed the workers and said that by visiting Železara he wished to confirm how important their work is for our country.
„Stay good and diligent, because you represent Serbia in the best manner", said the President. 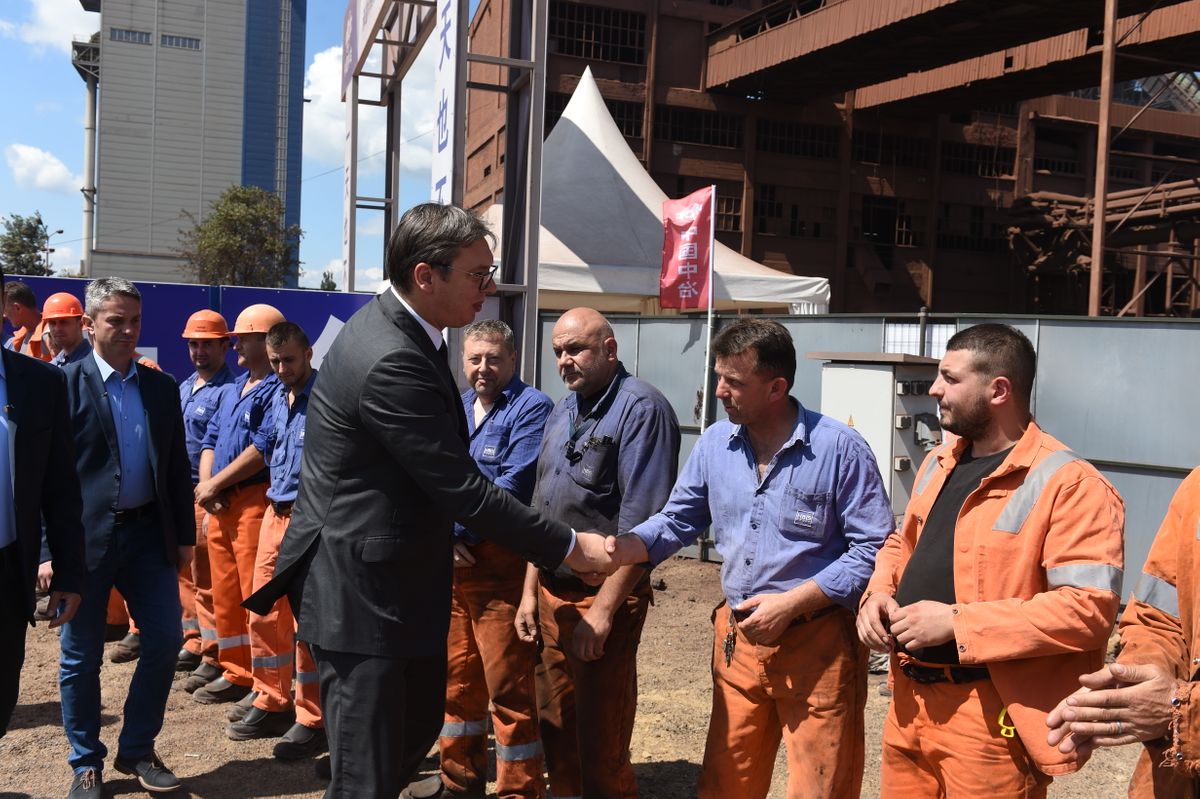 The Ambassador of the People's Republic of China Chen Bo in her address in Serbian language said that after the renewal the steel factory will be more competitive, and Smederevo and its surrounding will have cleaner air and brighter skies.
Ambassador Chen Bo added that the Chinese workers in Železara informed her that their Serbian colleagues are very kind, that they teach them the Serbian language, that they make home-made rakija and that they invite them to their slava (Family Saint Day) and that they feel encompassed by the family atmosphere.
"I would say that Železara is a house jointly built by the Chinese and the Serbian sides", said Ambassador Chen Bo.
President of the company HBIS Group Serbia Wang Lianxi said today that the construction of the new facility plant in Železara Smederevo as a comprehensive project for the preservation of energy and environmental protection will provide a momentum for further achievements of the company.
"HBIS believes that with the commitment of the leaders of Serbia and China, but also through the devoted and hard work of 5.000 workers, the project of overall energy preservation and environmental protection will be completed within the deadline thus creating the boost for further accomplishments of our company.
HBIS will not fail the mission and its expectations and it will make the best of efforts to fulfil its promises", said Wang Lianxi. 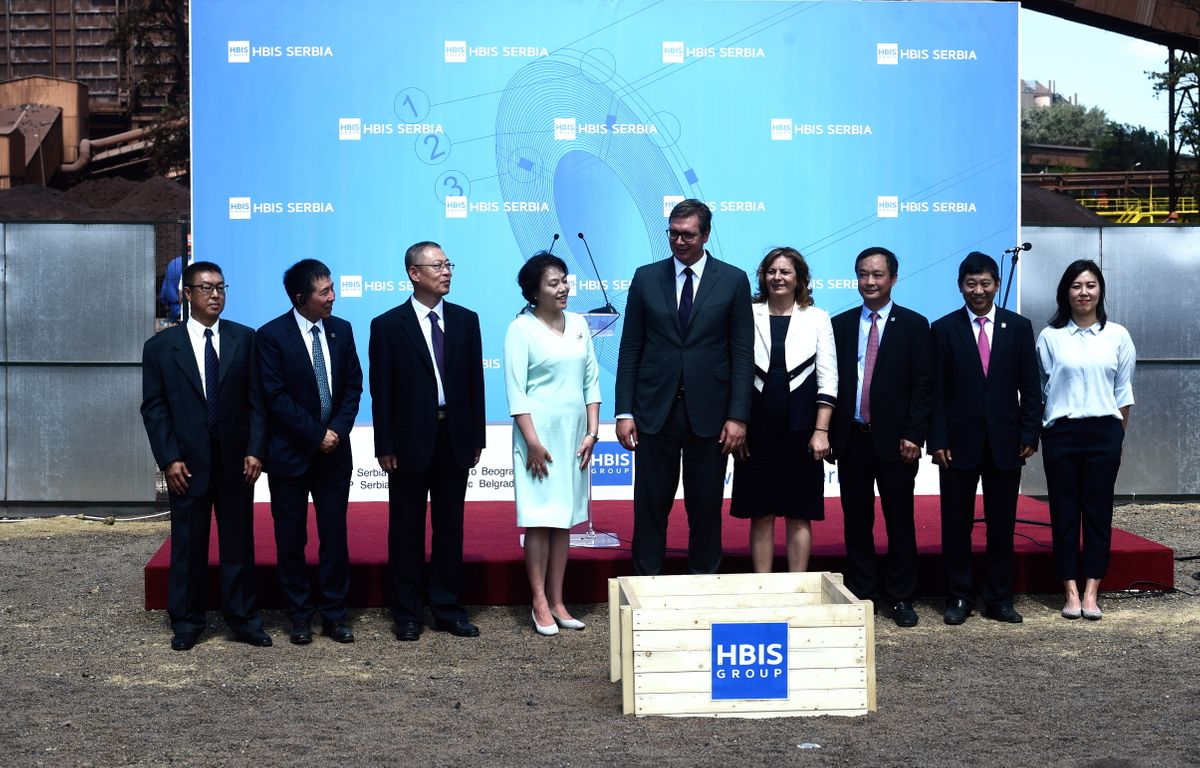 He added that the project whose construction was launched today will become an important milestone of HBIS Group Serbia for construction of a highly-competitive company for steel production in Europe.
As he said - today is a great day for the company and it will remain marked in the glorious history of friendly relations between Serbia and China.
Upon completion of the project, we will have a green, intelligent and leading state-of-the-art factory for energy preservation in Europe, while the environmental protection will reach the world level, said Wang Lianxi.
To that end, the Chinese partner will comply with the high standards i.e. it will transfer the know-how of all the companies in the ownership of the HBIS Group, it will introduce new technologies into the processes of green production from both China and the world, and will apply the innovations aimed at energy saving as well as the innovations in the systems of raw-materials, pusher furnaces, and converter systems.
He added that in the course of the last three years the HBIS Serbia development has been subject to the attention of the Presidents of Serbia and China - Aleksandar Vučić and Xi Jinping - as well as of the people of both countries, which contributes to its overall progress.
Share