President of the Republic of Serbia Aleksandar Vučić attended tonight the ceremonial unveiling of the monument to Stefan Nemanja on the Savski Square and said that today's ceremony signifies not just an act of monument unveiling but our act of being accountable to ourselves and our identity. 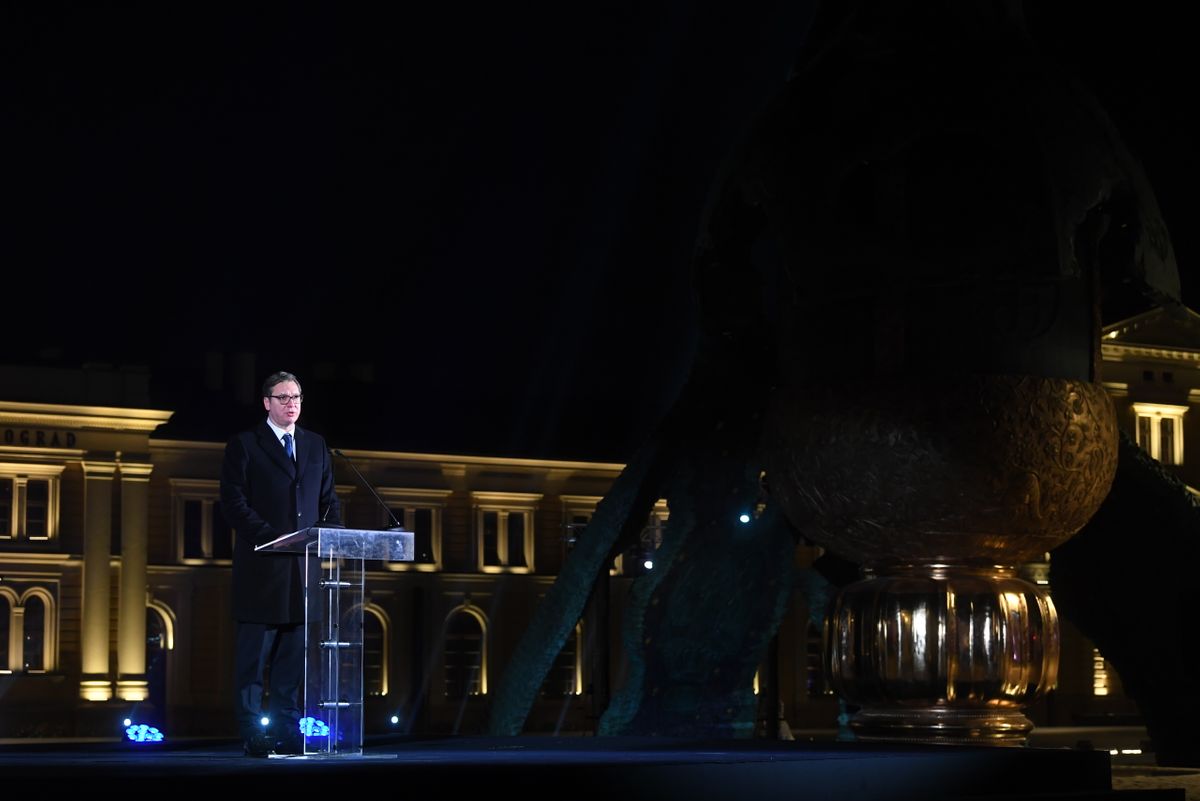 "To stand here indicates repentance for all the years during which he remained forgotten by us, but also the awareness that we have finally discovered the root that generated the most beautiful tree called Serbia.
Serbs had the Vlastimirović dinasty.
Serbs had the Vojislavljević dinasty.
Serbs also had the Vukanović dinasty.
They also had Višeslav and Mihailo and the Holy King Jovan Vladimir.
Serbs had the archons and princes and prefects and kings and saints - before Nemanja.
If he had given only Saint Sava to Serbia, he would have gifted her enough.
If he had given only Stefan the First-Crowned to Serbia, he would have gifted her enough.
By giving us both, he gave us a Serbia that was a strong and for the first time truly centralised state that was able to find its sovereign space between East and West, between the First and Second Rome", said President Vučić and added that the monument to Stefan Nemanja is a monument to the Grand Prince, but also to Serbia. 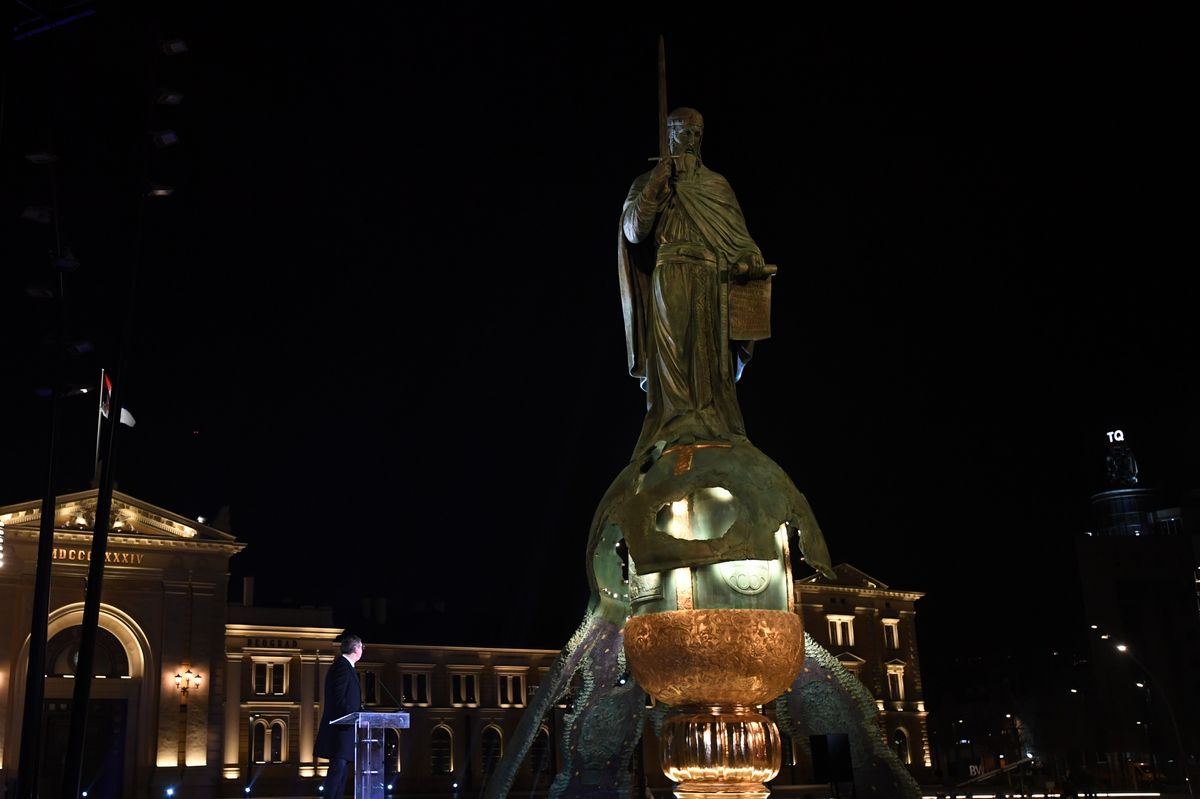 "On Hilandar, even today, a miraculous vine springs from the place where Stefan Nemanja was originally buried. In Belgrade, from this monument, that lineage, that path, that awareness of Serbia, should continue to grow, develop and constantly tell us how important it is to have a root, a name and an identity. And this monument is great because the story of us is great. And this monument is heavy because the story about us was often difficult. And it is amazing - as amazing as the story about us is. This monument is, therefore and above all, a story about us. About who we were, about where we were, what we did, and most of all - about what we are today and what we want to be," said President Vučić. He stated that in the previous period we tried to raise Serbia from the ashes - to renew and build railways, roads, hospitals, schools, but also to try to restore faith in ourselves, in the possibilities and strength of the Serbian state.
President Vučić pointed out that we managed to unite what is most important, to economically straighten the country, nationally defend it and spiritually restore and raise it.
"I am exceptionally happy tonight, because here, where we stand, and up there - there is a temple dedicated to Nemanja's third son Rastko Nemanjić, to the great and our Saint Sava. And just as we are unveiling this magnificent monument today on St. Sava's Day, so we managed in a short time not just to finish, but to essentially build and paint with the finest mosaic the most beautiful and largest Orthodox church in the world, the Church of St. Sava. In the same way, we will renew Hilandar and whole of our Serbia," said President Vučić and added that the monument represents Stefan Nemanja as a resolute ruler holding a sword in his right hand and the Hilandar Charter in his left.
"From his time until the present days, we are a state-building people. With that sword, he was carving out and building Serbia, and he guarded it. Before Nemanja, we were a culture of imitation and interpretation; from his time and onwards - a culture of creation, preservation and writing, which is symbolised by the Charter of Hilandar," said President Vučić and emphasised that we must build today, just as Nemanja made endowments, aware that our present is the endowment of our future. 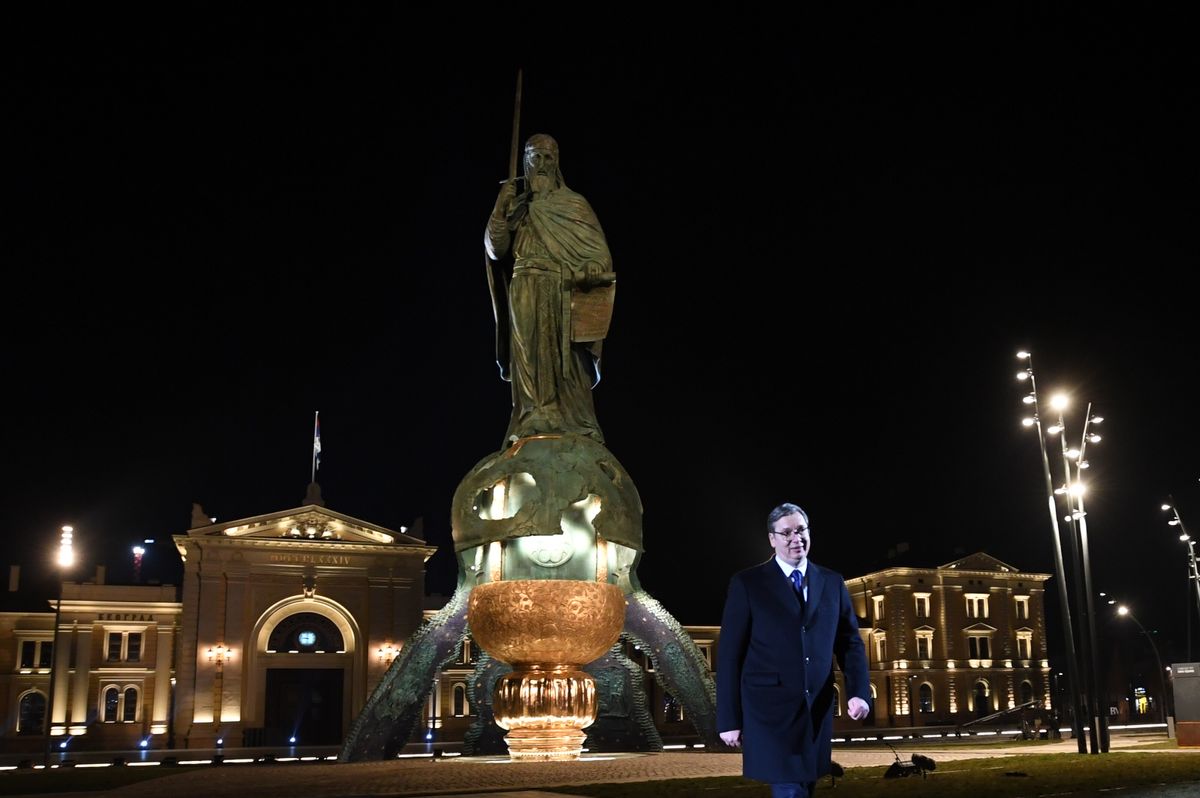 "Without the awareness that there was someone before us - someone who had dreams we live today - no dream of the future is possible. We have the present, because of Stefan Nemanja and his son Rastko - our Saint Sava, and because of Stefan the First-Crowned, because of Milutin, Dušan, Uroš, Lazar, Vuk, Đurađ, Stefan, and because of Đorđe and Miloš, Mihajlo and Milan, Petar, and both Aleksandars. Because of the people who told that story, the story about us, the story about Serbia. And the word we say today - the word 'Serbia' - is not ours. They created it, thus creating us too, and we must never forget that. They forged it, from Sitnica to Marica, from Kosovo to Kumanovo, from Cer to Kajmakčalan. There is a lot of blood and plenty of lead in that word. That's why it is so heavy, that's why it is so great. That is why it is such an obligation, for everyone who dares to say it.
And it was not easy to get to this day, to this act of partially repaying that colossal debt. Serbia could not do it; it did not have anything to do it with; it did not even know how to do it. She was afraid for a long time, she felt guilty to herself and others, and she stood with her head bowed down both in front of her past and in front of her future. And there is no culprit for that, except in ourselves. There was no reason for that, except, again, in ourselves.
It took us time - we needed courage, knowledge and to start believing again that we are no Balkan brat, no angry tribe without any roots, no usual suspect; it took us time to get back on our feet, stand up and remember every moment of that long history and each and every man who created us through it. It took us a while to tell everyone that we are not here to threaten anyone; that we have had enough of blood and wars, to understand, love, forgive, repent, but also that we will not just pretend not to exist. We have a name; we have a history, our history; we have fathers and, through them, we have pride; and thanks to them - we have freedom. Our freedom, just as that history is ours and our language, our language, culture, our culture, tradition and religion - ours again. We haven't stolen them from anyone, no one gave them to us, and we have no one to return them to. We do not want anything from anyone; we are interested in expanding in heights like this monument, but no one will force Serbia to give up its name or deeds again, and never again.
That is why this monument is, as they would say, colossal. Because they need to see it, and to see us through it. Upright and proud. People ready to work and build. Friends who do not wish harm to anyone, who will never take anything from anyone, but also who take pride in themselves and who will not be ashamed in front of anyone.
That is why this monument is a sort of a point that we put at the end of a story. The story about the beautiful and challenging past, the tale about wars, blood, slavery, liberation, mistakes, bad decisions, graves and re-emergence", said President Vučić and added that the truth about the unity of our people is one of our most important accounts and that we understand today how important it is to be one and unique entity, to preserve our language, our history, our culture and our future.
President Vučić thanked all the representatives of our people who were present tonight: the leadership of the Republic of Srpska, the representatives of the Serbian people from Montenegro, but also many other countries in the region and pointed out that, although we live in different countries, we will not allow anyone to take away our awareness that we belong to the same nation and the same family. 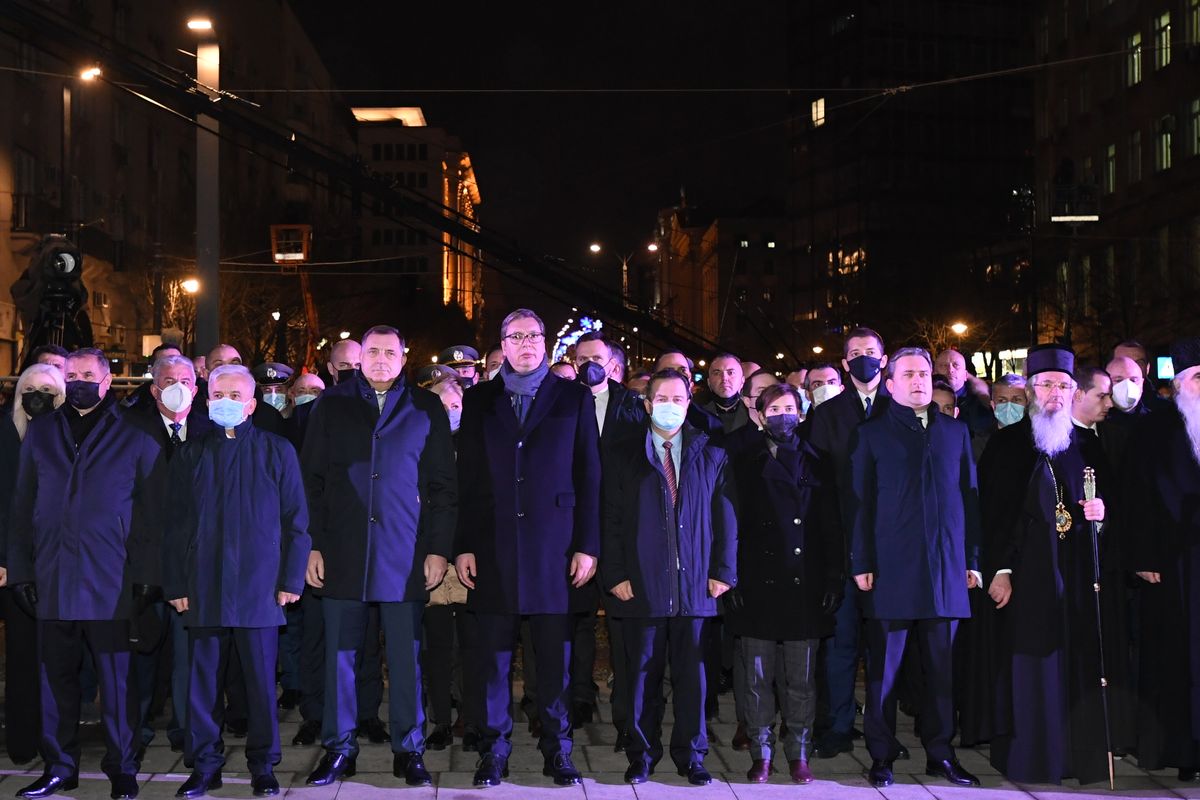 "I am grateful to everyone who contributed to the creation of this artistic masterpiece, from sculptors Svetomir Arsić Basara, Vladimir Veličković and Emir Kusturica to Aleksandar Rukavishnikov, Honored Artist of the Russian Federation and member of the Russian Academy of Arts.
Here, where the streets of Nemanja and Karađorđe symbolically merge, today we celebrate the splendour of our historical achievements, the restoration of statehood and the prosperous future that our descendants and we must diligently build.
Nemanja, for us, was the beginning. This monument is the end, but only the end to that beginning. Because from him we begin, and everyone who comes after us.
He is proof that history created us, but also that we are able to create history. And the good history, too - the history of peace, the history of knowledge, the history of growth, which we have never had.
In the name of that history, we are here today; in the name of that history, we are unveiling this monument. To Stefan Nemanja, the father, the ancestor, the creator and a saint.
And let him stand here, exalted, illuminated, and let all see him.
Let them see Serbia, the way we made it.
Honestly, from the depths of the soul of an ordinary Serbian mortal, I want to end this address with the words of Saint Sava, with which he addresses his father in the Service of Saint Simeon:
Pray to God for us, blessed Simeon, that your flock may be preserved inviolable! Glory, and now!
Long live Serbia!", Said President Vučić in his address.
Belgrade, 27th January 2021
Share