The President of the Republic of Serbia Aleksandar Vučić said today that Serbia has confidence in the President of France Emmanuel Macron and expressed his gratitude to France for supporting our country on the European path. 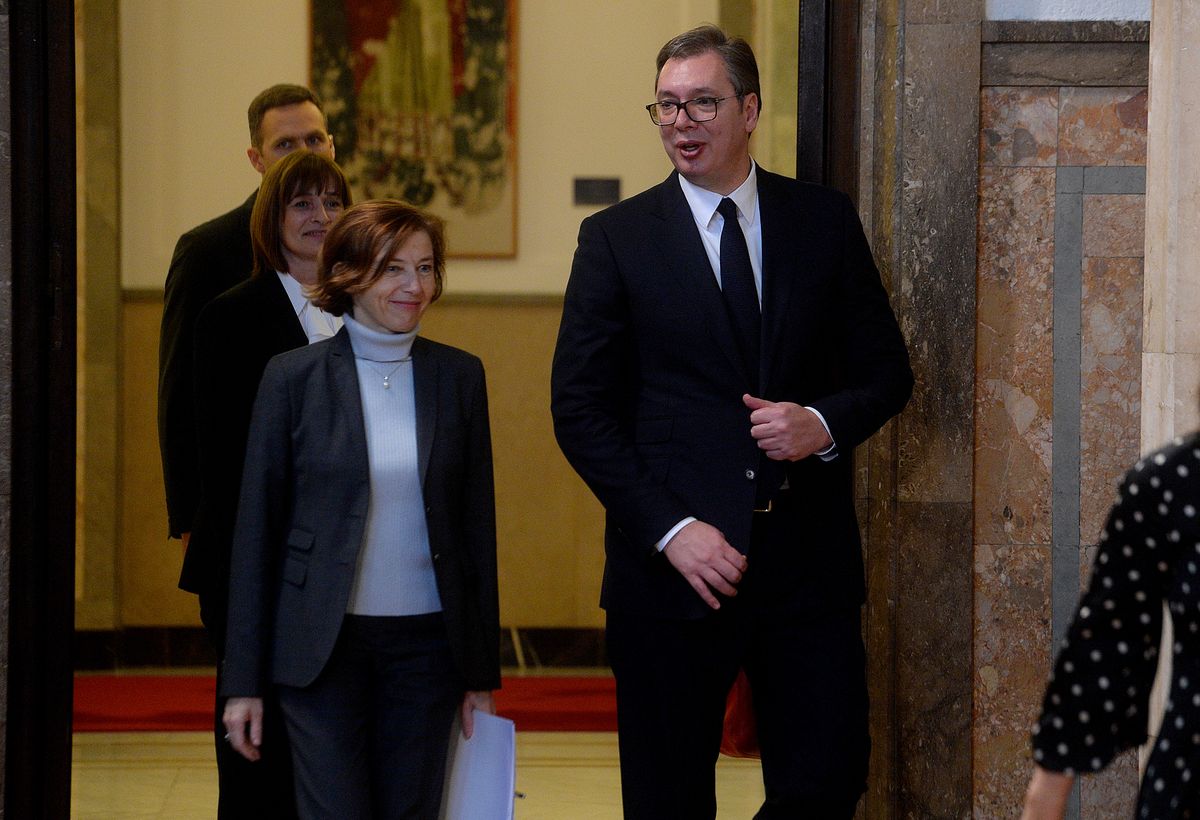 After the meeting with the French Minister of Defence Florence Parly, President Vučić said that for the first time after 35 years, a French Defence Minister visits Belgrade.
"I am very pleased with that and thank you very much. Please convey to President Emmanuel Macron the warmest greetings of the people of Serbia and my personal, I thank him for his visit this summer and the message he communicated to the citizens of Serbia," said President Vučić.
Stating that the two countries have good cooperation, President Vučić emphasised that Serbia will preserve the military neutrality, but will keep developing the increasingly good relations with France.
He emphasised the good cooperation in the international missions and stressed that Serbia is ready to participate bilaterally with France in various missions.
"For us, the French are friends, we were friends back in 1914 and 1918, in World War II and we have to look into the future with a common or almost equal view," said President Vučić.
He stressed that the economic cooperation between the two countries is good and that trade exchange is on the rise, and that France employs more than 11,000 people in Serbia. 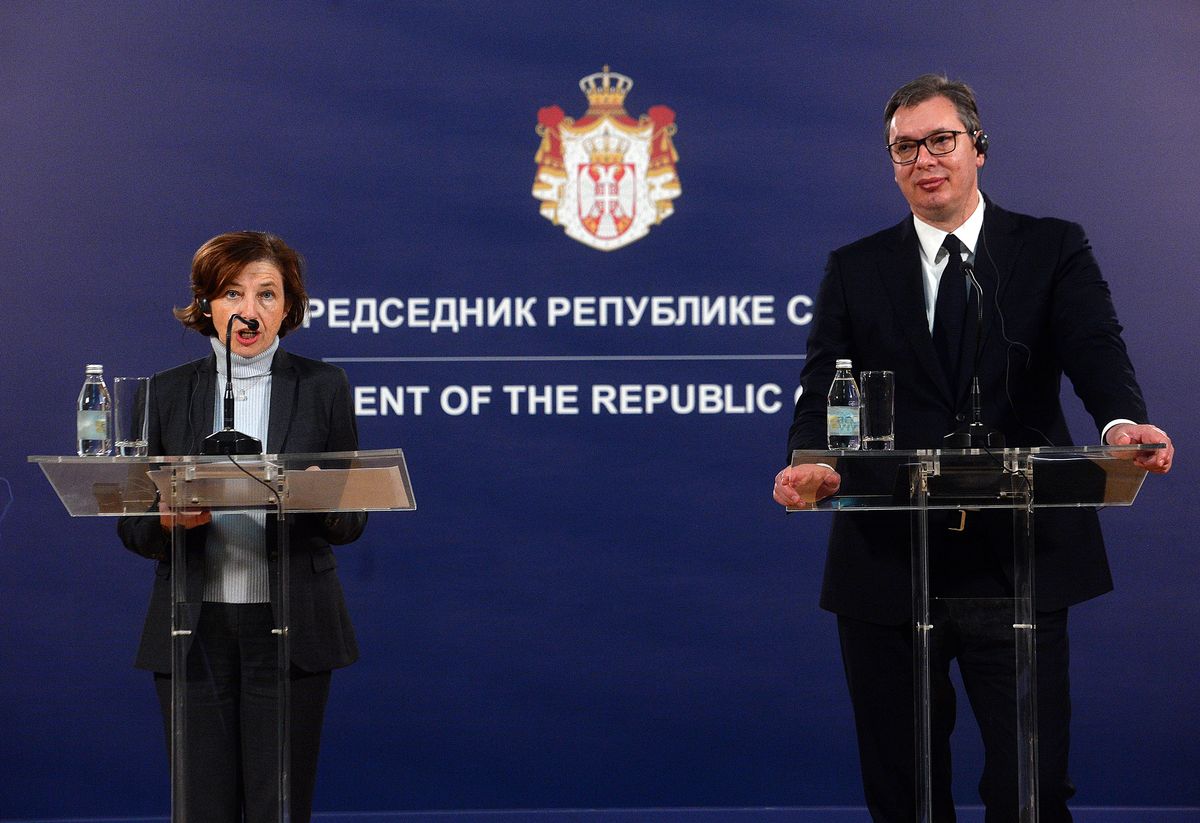 President Vučić said that there is a growing number of activities between the armies of Serbia and France, and that the French will participate in an important exercise on the territory of Serbia to be held in June.
"We are exceptionally content because of this, it will expand the knowledge and prospects of our people and we will observe what we can learn from the French army," said President Vučić, adding that Serbia has bought 'Mistral' missiles and will already pay the first instalment for them today or on Monday.
"I extend my gratitude to the French for seeking to work with us on this issue, and there are many more areas in the sphere of military industry and weapons purchase where we are interested in French products and we have discussed that.
I believe that in the coming weeks and months we will have some more positive news to surprise you with," said President Vučić.
The President stressed that Serbia does not participate in an almost orchestrated campaign against Macron over some decisions in the EU, namely the decision not to open the EU membership talks with North Macedonia and Albania.
"We have great confidence in Macron, we consider him a sincere friend. I believe he will observe the French interests first and foremost, but also the Serbian ones. People in Serbia trust France," said President Vučić. 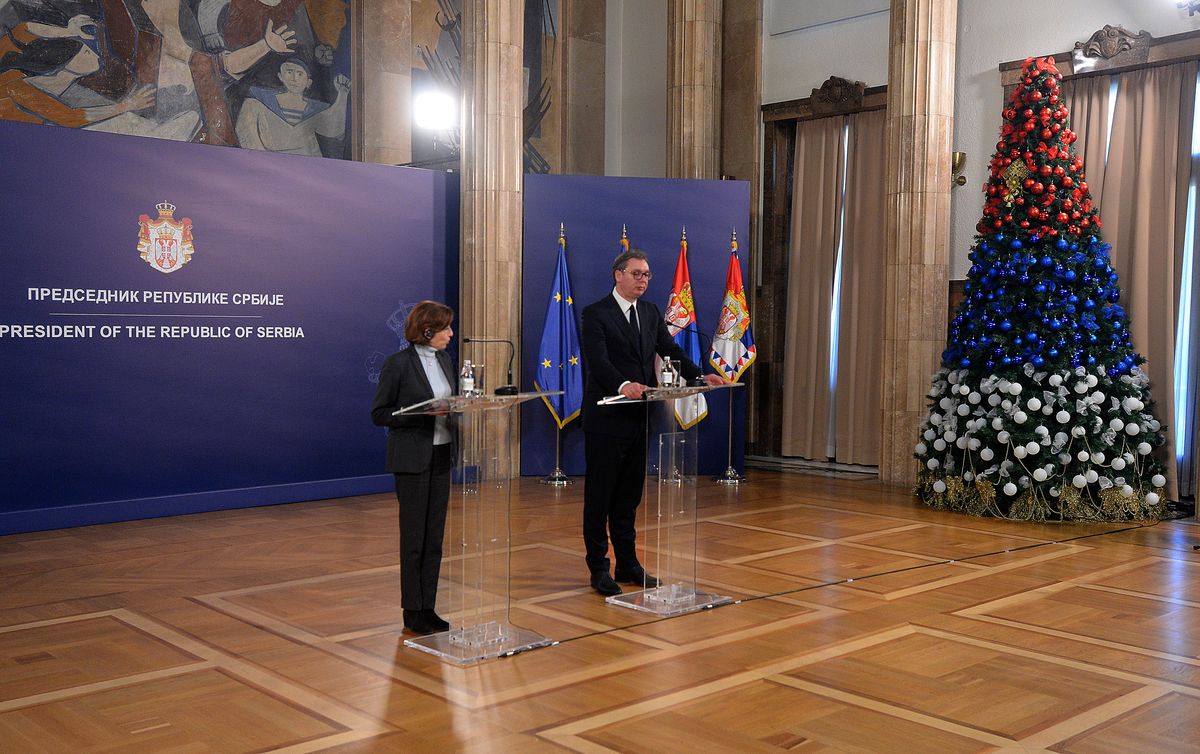 President Vučić asked the French Minister of Defence to convey cordial greetings to President Macron along with wishes for successful reforms in France.
"There are no successful reforms without hard moves, tell Macron to persevere and stay firm in his ideas, and then even those who are not grateful to him now, will become grateful. I wish all the best to France and Macron. You are always welcome in Serbia, long live the friendship between Serbia and France," President Vučić said.
French Minister of Defence Florence Parly pointed out that France is not against enlargement and that nothing will change in what has been negotiated out with Serbia so far.
Parly stressed that the Western Balkans is a neighbor of the EU and that it is important for it to be included in Europe and exempt from negative influences.
She added that Macron said that Europe must do its own work before any new enlargement takes place, but that at the same time she wishes there would be more Union influence in the region in every sense.
Minister Parly said that France wants the EU reformed before its enlargement, in the interests of both the present and the future members. 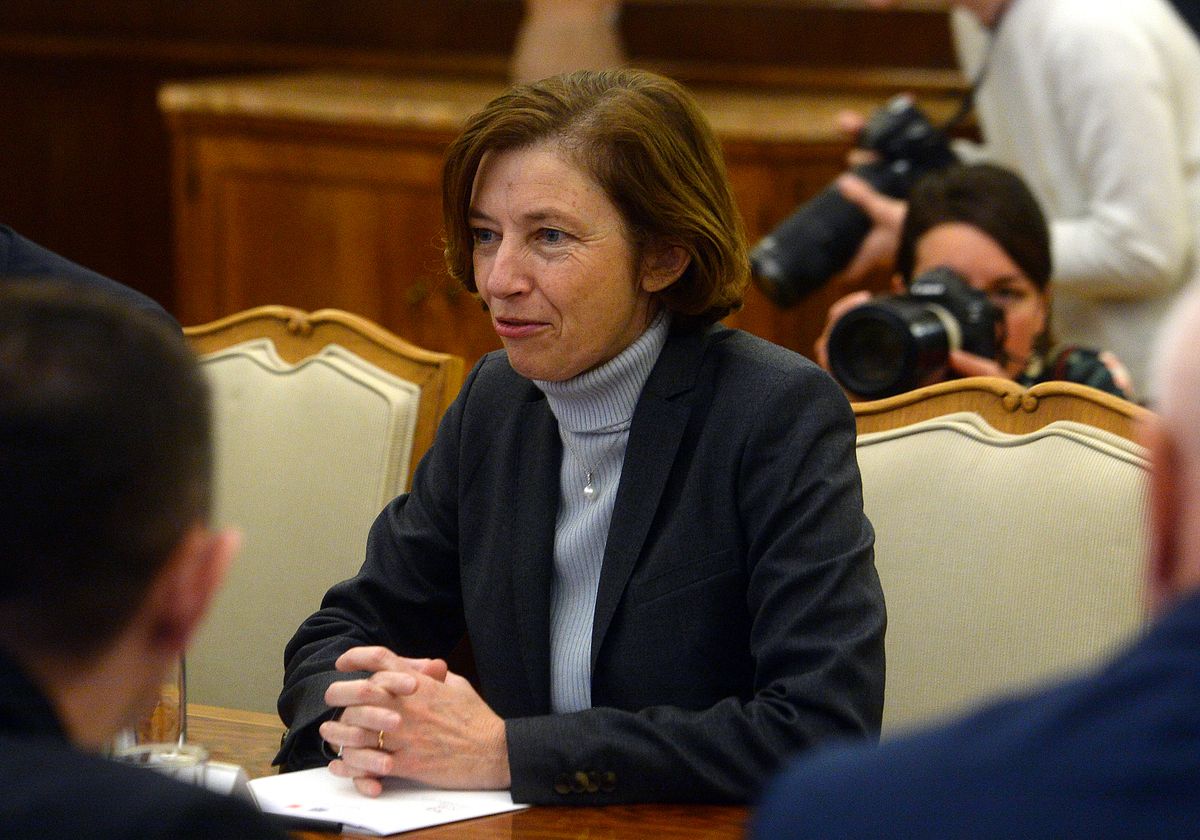 She stressed that France does not question what has been achieved in the EU negotiations with Serbia and Montenegro so far and that it is important to deepen the confidence, and that the defence area is the best for something like that.
Minister Parly explained that France had set the prerequisite for the reform of the negotiation process with a view to making it better for the countries entering the process of accession negotiations. She also said that the EU needs to reform itself deeply, which will take years.
Minister Parly stressed that her visit was a continuation of the July visit of French President Emmanuel Macron when it was agreed that the two countries' partnership would be strengthened in the field of defence.
"He told me how much he holds on to Franco-Serbian cooperation. It is not only historic, but strategic. The trip to Serbia impressed him and he specifically designated Serbia in his report as a partner country, with which the partnership would be further enhanced, given the close ties between the two peoples. The brotherhood in arms has remained in our hearts since World War I, and now we have grandchildren of the survivors who testify to our common history,” she explained.
She stressed that France will not forget the contribution of the Serbian people in the World War I.
Minister Parly said that she had exquisitely good talks with President Vučić, reminding that the two countries are marking 180 years of diplomatic relations this year. 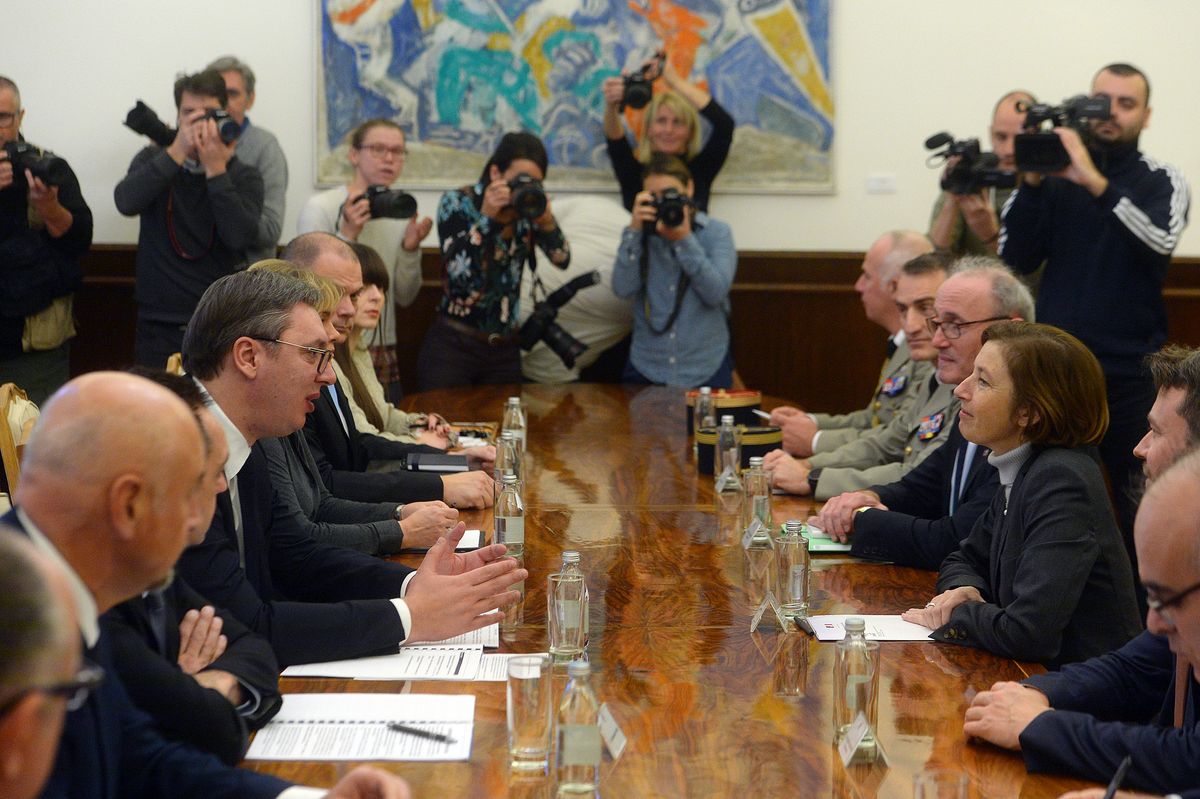 Speaking about bilateral relations in the area of defence, Minister Parly said that there is a common interest in developing a strategic partnership, that open and free dialogue between the Ministries is maintained and that France is interested in how Serbia perceives the actors in the future of the region and the continent, especially concerning Kosovo and Metohija, the future of NATO, the fight against terrorism and organised crime.
She commended the participation of the Serbian military in peacekeeping missions, noting that Serbia has a recognised expertise in the field of medical support that France wants to further valorize.
She also pointed out the cooperation in the field of armament, adding that helicopters had already been delivered, that a maintenance centre is being set up and that cooperation would be expanded within the "Mistral 3" defence system, which represents a particular sign of confidence.
She stressed that France respects Serbia's decision to be military-neutral and added that international cooperation is essential in the face of new challenges. 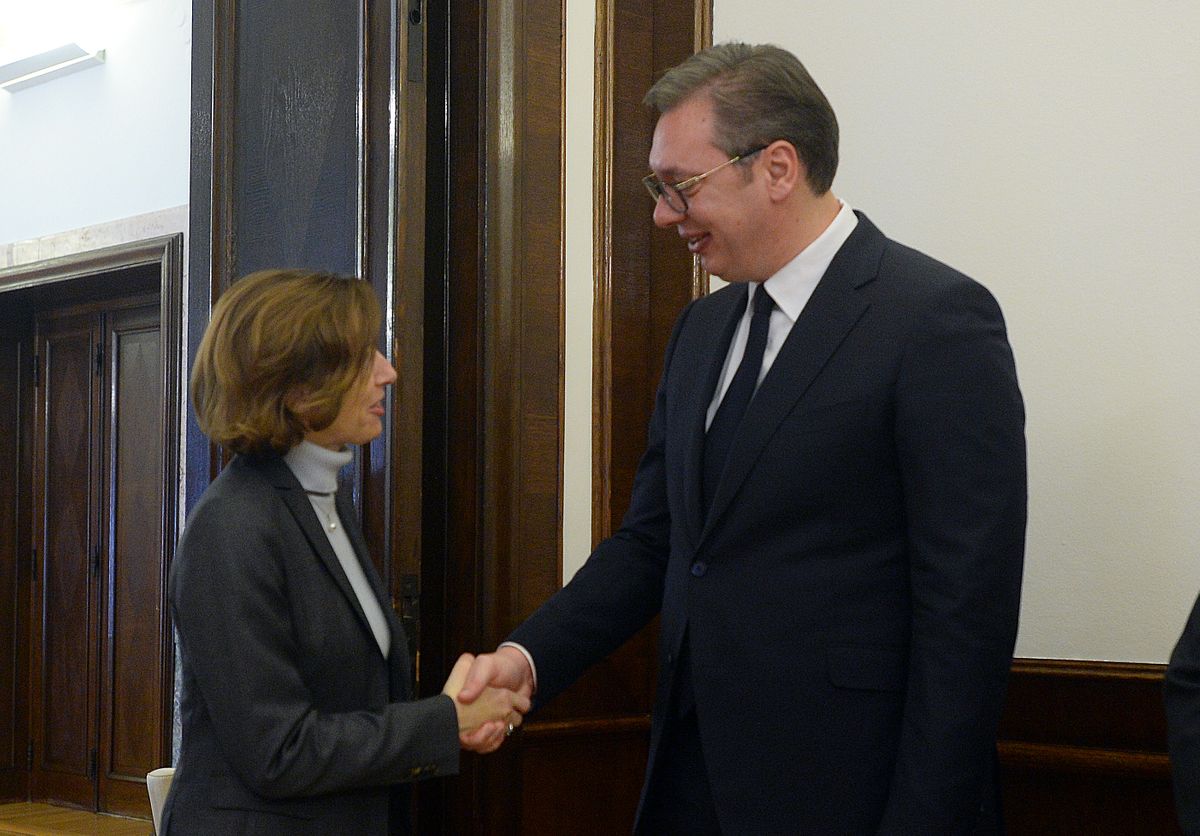