President of the Republic of Serbia Aleksandar Vučić and the former President of the European Council and former Prime Minister of the Kingdom of Belgium Herman Van Rompuy exchanged opinions and experiences at today's conference "EU and Serbia: Shared Destiny?" to the topics of the European perspective of Serbia and Belgian experience. They agreed that both countries perceive the peace, stability and democracy as the key shared values. 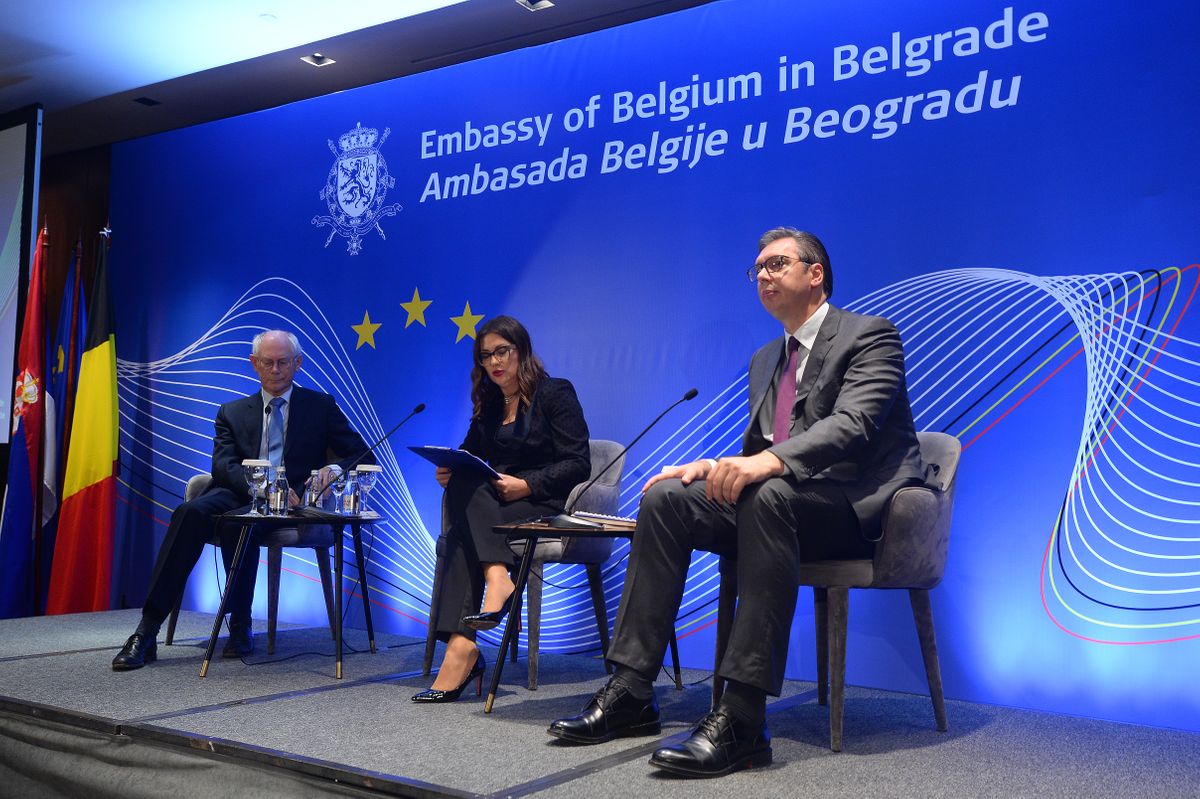 President Vučić emphasised that Serbia stands on the European path, but also indicated the substantial differences between the rational approach and the emotions among the citizens.
"I will always be able to promote the EU ideas, it is in the best interest of Serbia. Those are the values that we accept. That is the best path for Serbia and we belong there so that we can make real progress for the country and the people. However, it is important to highlight the discrepancy between the rational and the emotional perception of the EU which exists among our people. Serbia has always been a reliable partner of the EU, but we also need to take care of ourselves, of our economy and the best interests for our country", said the President.
President Vučić underlined that there are many things in the collective memory of the people and that it can represent a problem for deployment of ideas. He added that it may be the case even for the next ten years, but that there is still a clear majority in favour of the European path of Serbia, based on rational elements.
President Vučić said that it is always better to be "a part of the club, than to be out of it" and reminded that 67 per cent of the total trade exchange Serbia maintains with the EU along with 11 per cent with the regional countries which makes 78 per cent with the countries that are a part of this area, as opposed to only 20 per cent with all the others together.
He also noted that 80 per cent of direct foreign investments come from the EU countries and that our export is focused on the EU countries by 71 per cent. The President said that it is natural that we choose the democratic values of the EU. 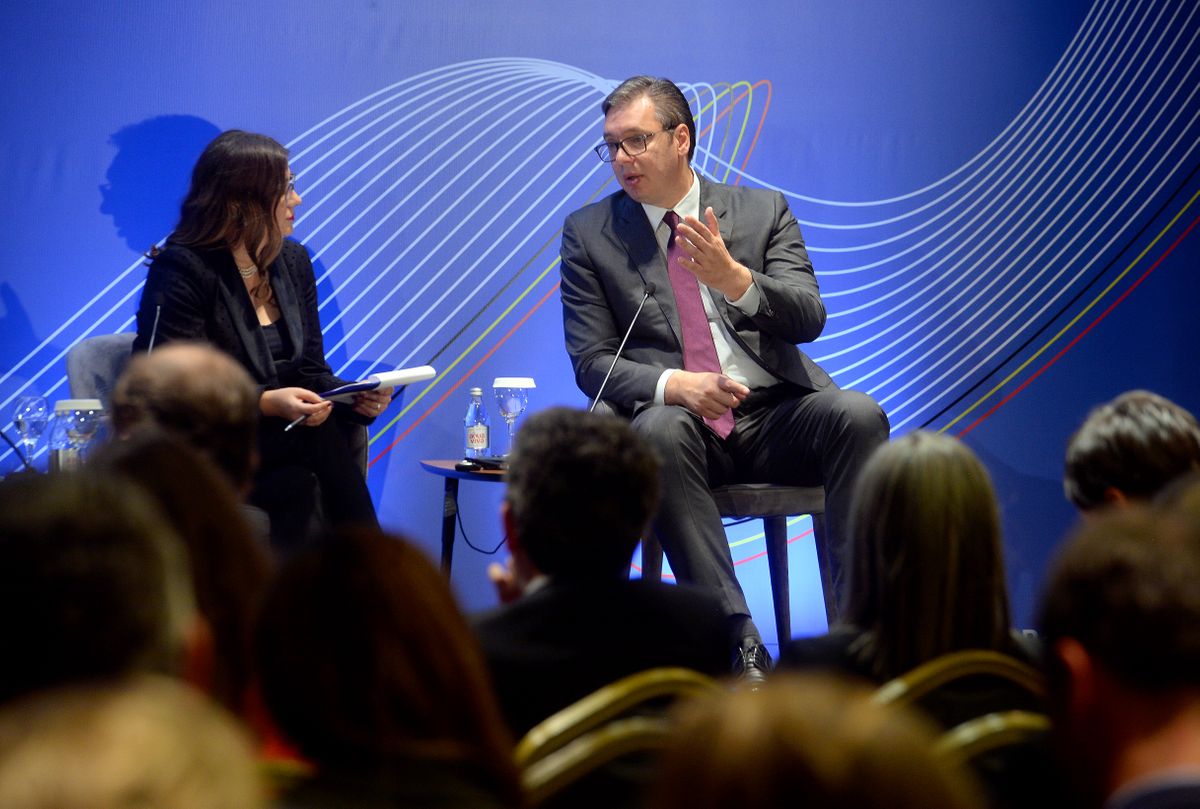 President Vučić iterated that Serbia remains on the European path and said it could be the next country to be received in the EU membership.
President Vučić said that he feels European as well as everyone else in the conference hall where the panel took place because Serbia is and has always been a part of Europe. However, he noted that at the mentioning of the EU most people would immediately say - it is not about the differences between Poland and Ukraine or their GDPs, but it is about Kosovo.
"What we see is pressure and even more pressure on the Kosovo issue. That is our problem", said President Vučić.
The former President of the European Council and former Prime Minister of Belgium Herman Van Rompuy said that the key of prosperity is neither in Beijing nor in Moscow nor in Ankara, but in Brussels and added that he expects the EU to create the climate of trust for the solution of the Kosovo issue.
Van Rompuy said that Serbia in the EU could be a bridge for this part of Europe to better connect with Bulgaria, Romania, Cyprus and other countries.
"Serbia can contribute a lot to this and be the bridge between the East and the West of Europe. We are a part of the same culture and the same civilisation. This is about the spirit of building bridges between the two bodies of Europe and Serbia can play an important role in the process. I know there are obstacles to the membership, but when you attain the results - you will forget about those obstacles. Therefore, keep leaping over the obstacles that lead you to disappointment", said Rompuy.
Kosovo is one of the pivotal elements to achieve the EU accession agreement and that is one difficult issue without which the European process cannot be finalised, said Van Rompuy when asked about the hindrances for the EU accession of Serbia
He expressed his expectations that the Kosovo problem - after the trust is restored - will be solved as it was the case with North Macedonia. 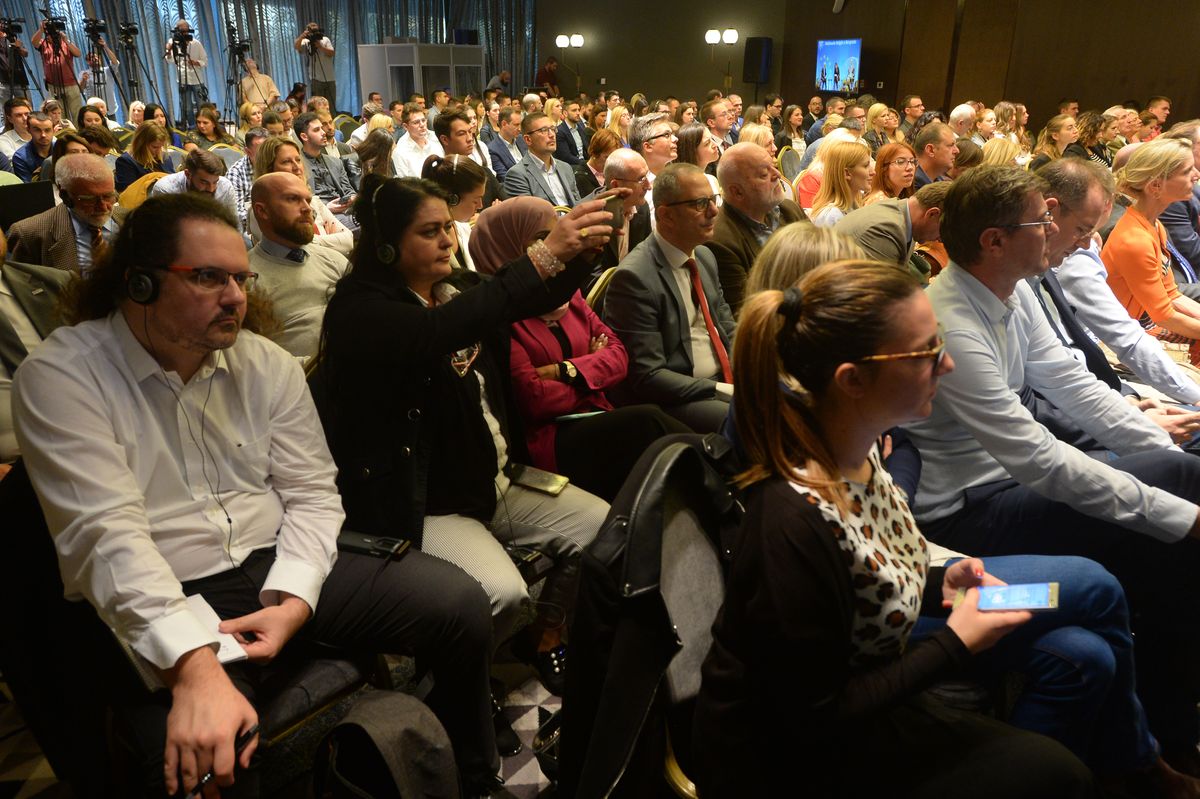 Van Rompuy said that he understands the President of Serbia who says that other partners are also necessary for economic development.
"We do not have anything against it as we also seek to attract Chinese investments. China is welcome and we should have excellent relations with Russia as well, but this is not easy right now due to the events in Ukraine", said Van Rompuy and added that the situation with Turkey is even more complicated.
Van Rompuy said that it is important for Serbia to have as many friends as possible, but that the benefits those countries can deliver are far smaller than what the EU can bring.
We are your best trade partner and investor and it will stay so in the future, said Van Rompuy and added that geography is yet another strong linking argument because it is known that Serbia has always been trading most with the ones nearest to it.
President Vučić said that Serbia will continue to maintain the independent foreign policy and that this is entirely in accordance with the European integrations as the strategic determination of our country.
He said that the European integrations represent the strategic objective of Serbia, but that at the same time the strengthening of the independence of Serbia in the matters of foreign policy is also essential.
"If you analyse the situation within the EU, you can see that each country has the veto power on various issues and that this enables the independent status to those countries", said President Vučić.

He said that he insisted on it for some other reasons as well because - as he explained - we have been occasionally lectured by the people from various organisations and institutions of some countries especially regarding the position of Serbia towards China and to a smaller extent regarding the relations with Russia and Turkey.
"The citizens of Serbia will not ask you, Rompuy, why they do not live better and why people leave and whether the state will be able to increase the salaries of nurses by 15 per cent... We must take care of ourselves. However, it does not imply disloyalty to the European Union just like it was with some other member states which obtained everything from the EU and then used the first opportunity to turn their back to the EU", emphasised President Vučić.
He added that Serbia has always been a very loyal and reliable partner, but that we need to take care of ourselves and that we will continue to do so in the future.
Share