Declaration on strategic partnership between the two countries signed in Greece

President of the Republic of Serbia Aleksandar Vučić and Prime Minister of the Hellenic Republic Kyriakos Mitsotakis signed a Joint Declaration in Athens today on establishing a strategic partnership between the two countries. 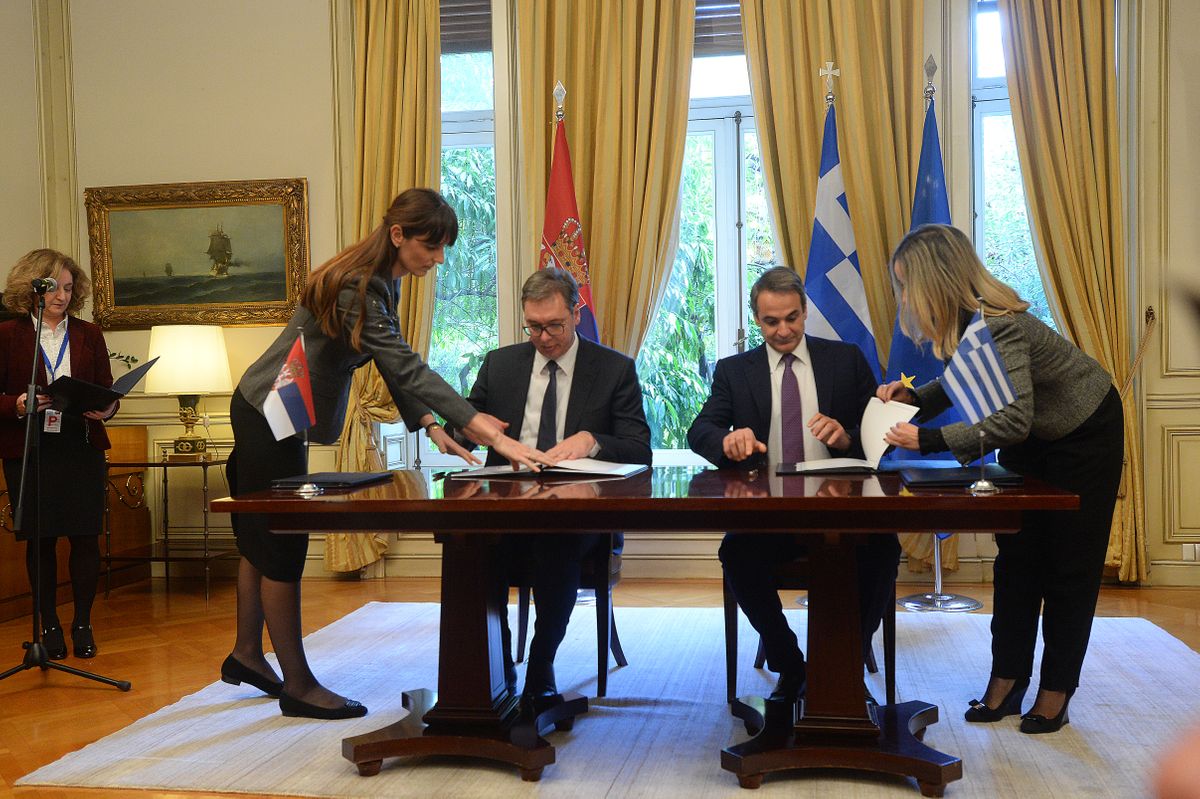 President Vučić said it is hard for Serbia to find anywhere in the world a sincere and loyal friend like Greece and emphasised the great importance of the Declaration on Strategic Partnership for the relations between the two countries.
"It is of great importance to us. You (Mitsotakis) said that you have many great and powerful allies. Serbia is neither a great nor a powerful ally, but it is a loyal and sincere friend of the Greek people and the Greek state," said President Vučić, adding that there are few places in the world where Serbia would find a sincere and loyal friend like Greece.
President Vučić said that the Declaration on Strategic Partnership addresses six areas - politics and foreign policy cooperation, security and defence, science and education, economy, culture and environmental protection. 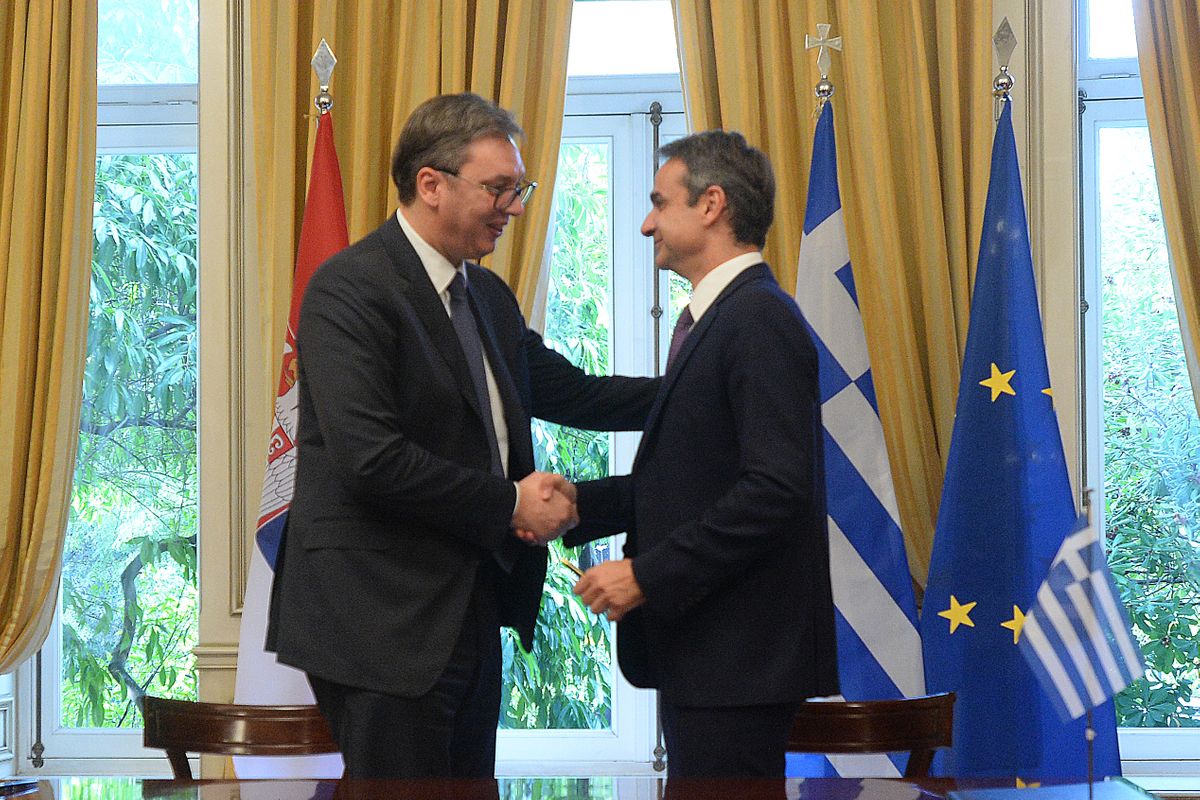 Stating that Serbia is grateful to Greece for its support on the Kosovo and Metohija issue, President Vučić said that Serbia also fully supports the territorial integrity of Greece on land and at sea.
President Vučić said that the two countries already have good cooperation in the field of defence and security and that the development of good relations between the military industries and cooperation in personnel exchange will continue. He also announced that a joint bilateral or trilateral exercise will be held next year in Serbia, together with Greece and Cyprus.
President Vučić further added that Serbia has a particular respect for the family of Prime Minister Mitsotakis, his father and ancestors, who, as he said, indebted the Serbian people with their respect, love and brotherhood they have never concealed.
Speaking about economic cooperation, President Vučić said that the volume of the trade cooperation amounts to 500 million euros while the exchange of services reaches about 530 million, and expressed confidence that both figures can increase dramatically. 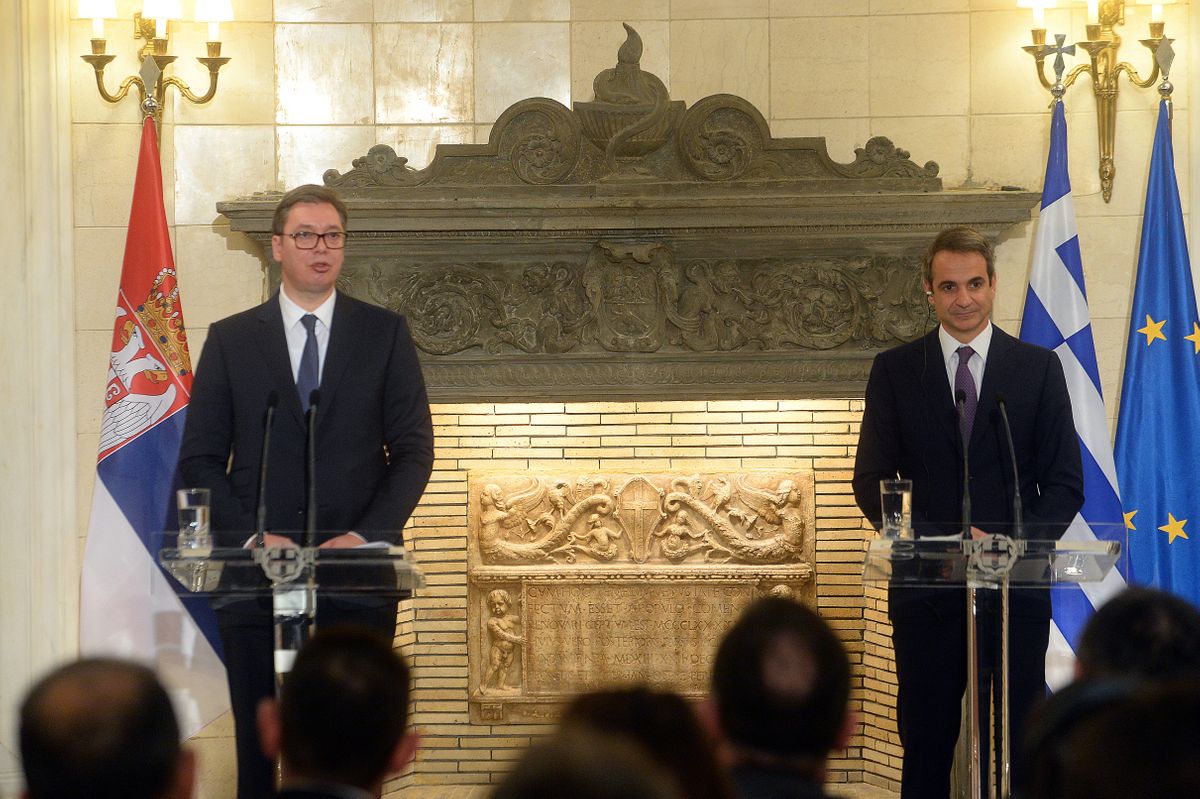 President Vučić said that Serbia will receive another confirmation of its economic results from the world in the coming days, adding that he expects more investments from Greece and that he is sure that for the first time in many years there will be Serbian investors coming to Greece.
He stressed the importance of cooperation in science and education, as well as in the cultural sphere, while the special point of the Declaration was devoted to the cooperation in the field of environmental protection.
President Vučić thanked both Prime Minister Mitsotakis and President Pavlopoulos for supporting Serbia on the European path, which is of great importance for our country.
"We believe in your sincere support and commitment to us being the members of the EU with you together," said President Vučić.
President Vučić added that Serbia has accepted the invitation of the Greek friends to help, not only them but also the migrants' children who have no one to worry about them and that he will take over the care about a part of migrants' children without parental escort.
"We did not do it because someone in Europe would appreciate it, but because we think we are helping those children and because we can do something together with you. Whether anyone will appreciate it - that is a question for them," said the President of Serbia. 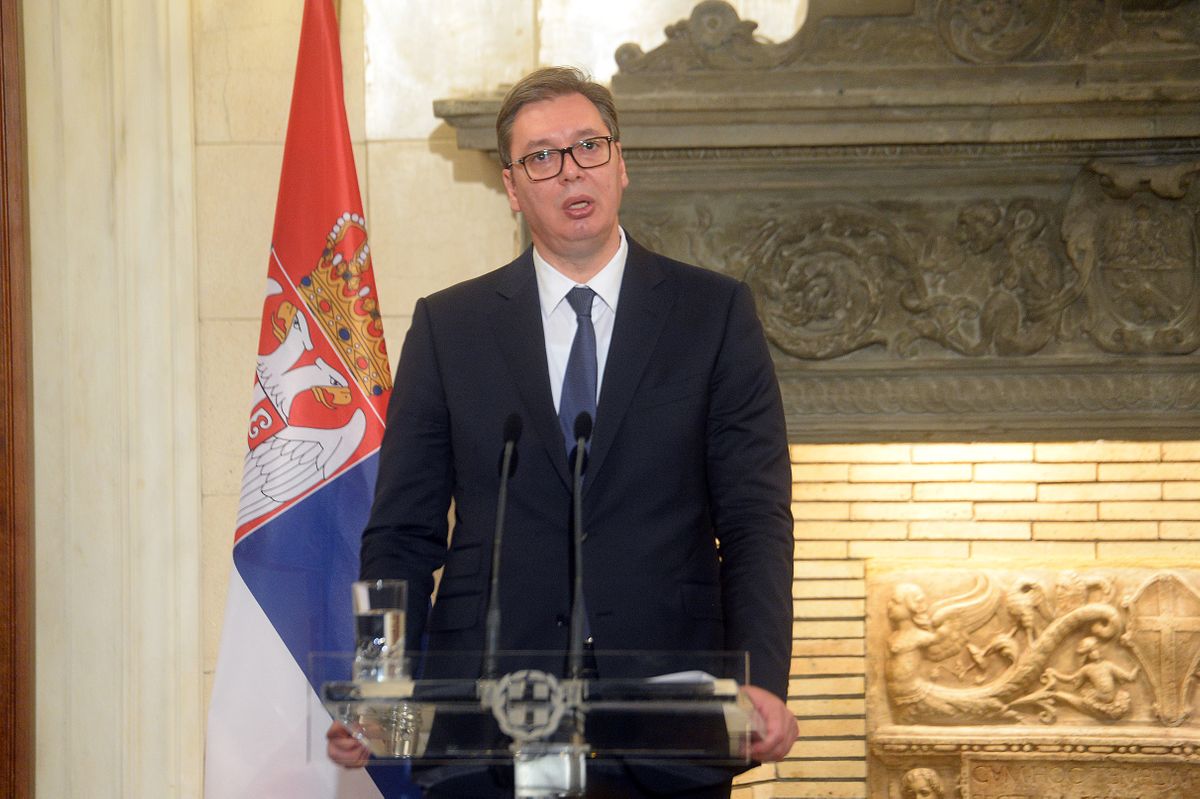 President Vučić reiterated that Serbia will support the request of Greece for the return of artefacts from Great Britain at any place, in the UN bodies, international organisations and institutions.
"At any place, you will have the open and unequivocal support of Serbia," underlined President Vučić.
President Vučić emphasised that today is an important day for Serbia and that the Declaration not only created an opportunity for closer and more thorough cooperation in all areas but also put a seal on a decades-long and centuries-old friendship that no one will be able to destroy.
"It is an important task for Serbia to always be side by side with Greece, to keep the backs of Greece, as I am sure our Greek friends will understand that we always count on their support and that we are certain that our backs are secured when Greece stands behind us," concluded President Vučić. 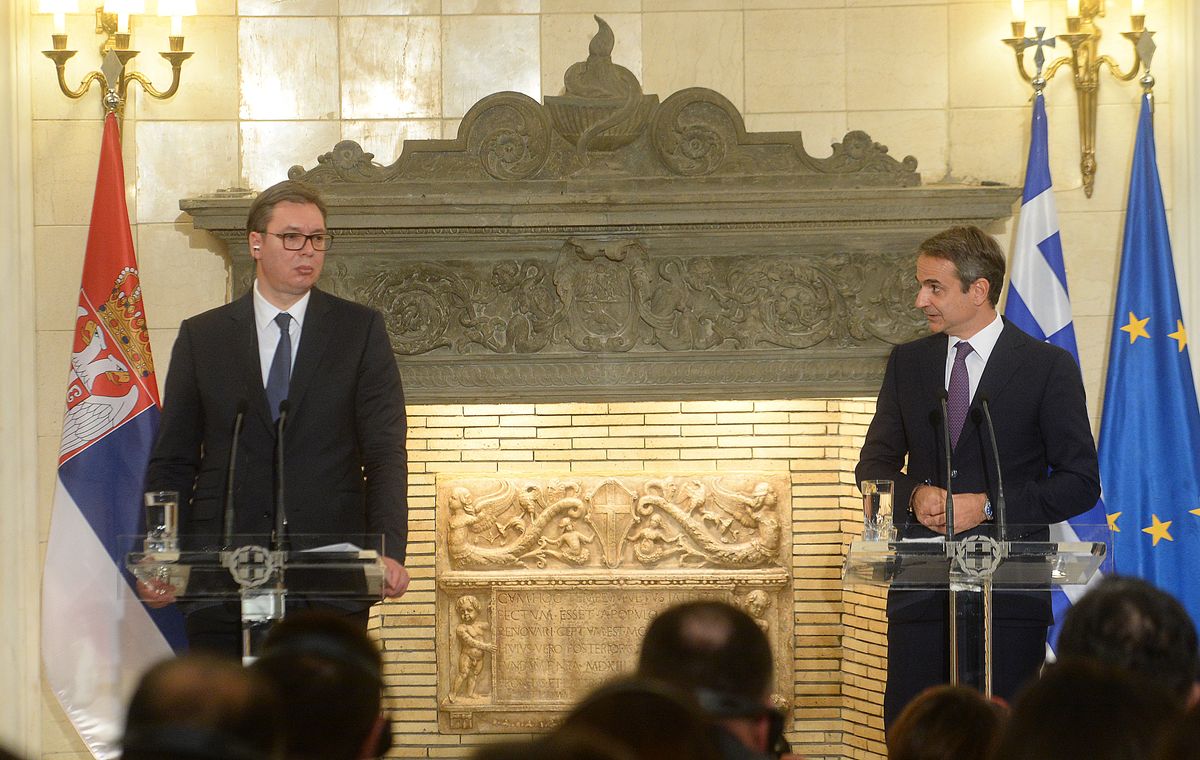 Greek Prime Minister Kyriakos Mitsotakis said that the Declaration on Strategic Partnership between Serbia and Greece opens up a new chapter in the relations between the two countries and said that the position of Greece regarding the support for Serbia's European integrations, as well as the dialogue between Belgrade and Priština, would not change.
"The Declaration envisages strategic cooperation that should have been signed many years ago. It is a framework that promotes and enriches all levels of the joint Serbian and Greek path and relates to defence, economy, security, culture, tourism, sport and education...", emphasised Prime Minister Mitsotakis.
He said that the Declaration should have been signed by Serbia and Greece many years ago and that he discussed with President Vučić today the priority areas - energy and infrastructure.
Prime Minister Mitsotakis added that the primary objective is to complete the Piraeus-Thessaloniki-Skopje-Belgrade-Budapest railway as it is of great importance for trade and transport and which would improve the communication of the four nations.
He says he discussed with President Vučić the energy diversification of supply and security throughout the region in the field of energy. 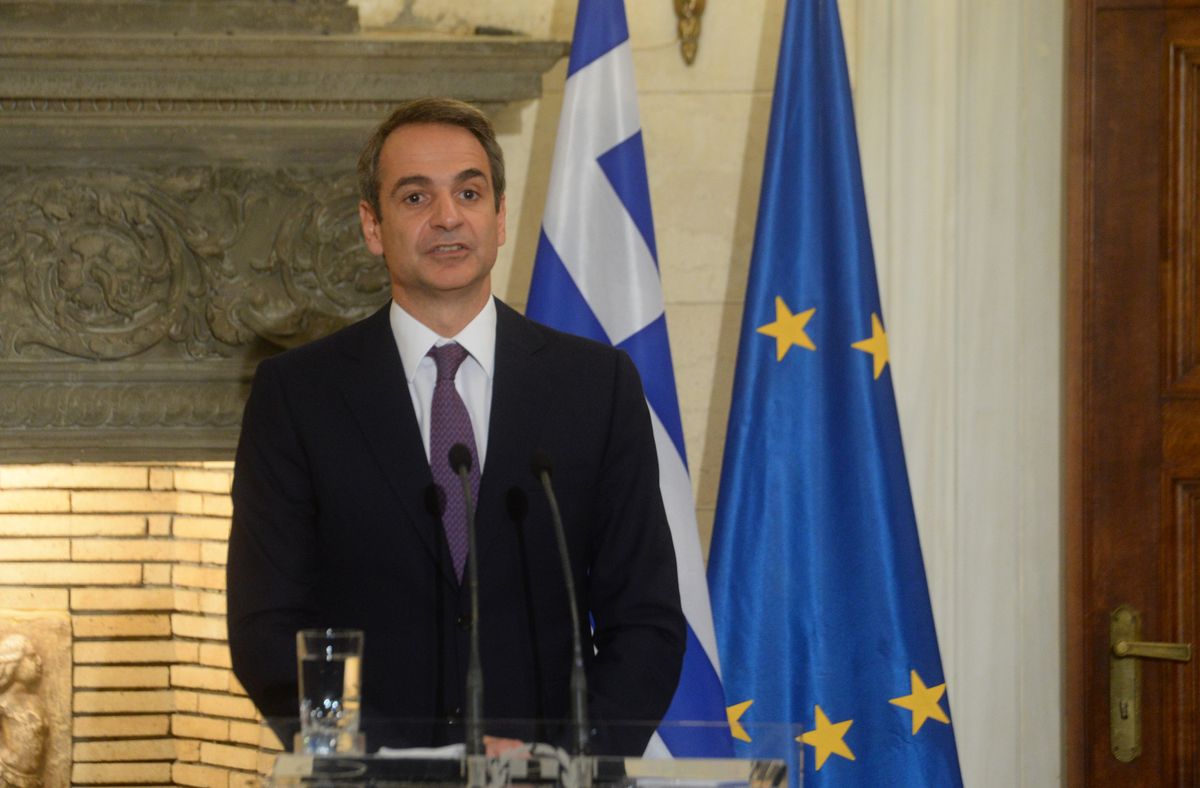 "Greece supports the development of the so-called transversal Corridor, i.e. the completion of the Greek and Bulgarian gas pipelines, but also the Bulgaria-Serbia pipeline, and I therefore welcome as a very significant position that Serbia is ready to buy gas from this diversified source as soon as these investments are completed in the Greek territory," emphasised Prime Minister Mitsotakis.
Concerning the cooperation in other areas of economy, Prime Minister Mitsotakis said Greece has a strong business presence in Serbia and congratulated President Vučić on good economic results as the Serbian economy is developing rapidly.
"We are ready to support the investments in your country even more as Greece comes out of the crisis," he said.
Prime Minister Mitsotakis added that Greece is ready to do more in the field of tourism so that Greeks come to Serbia as well, and that an honorary consulate in Heraklion, Crete, has been agreed. 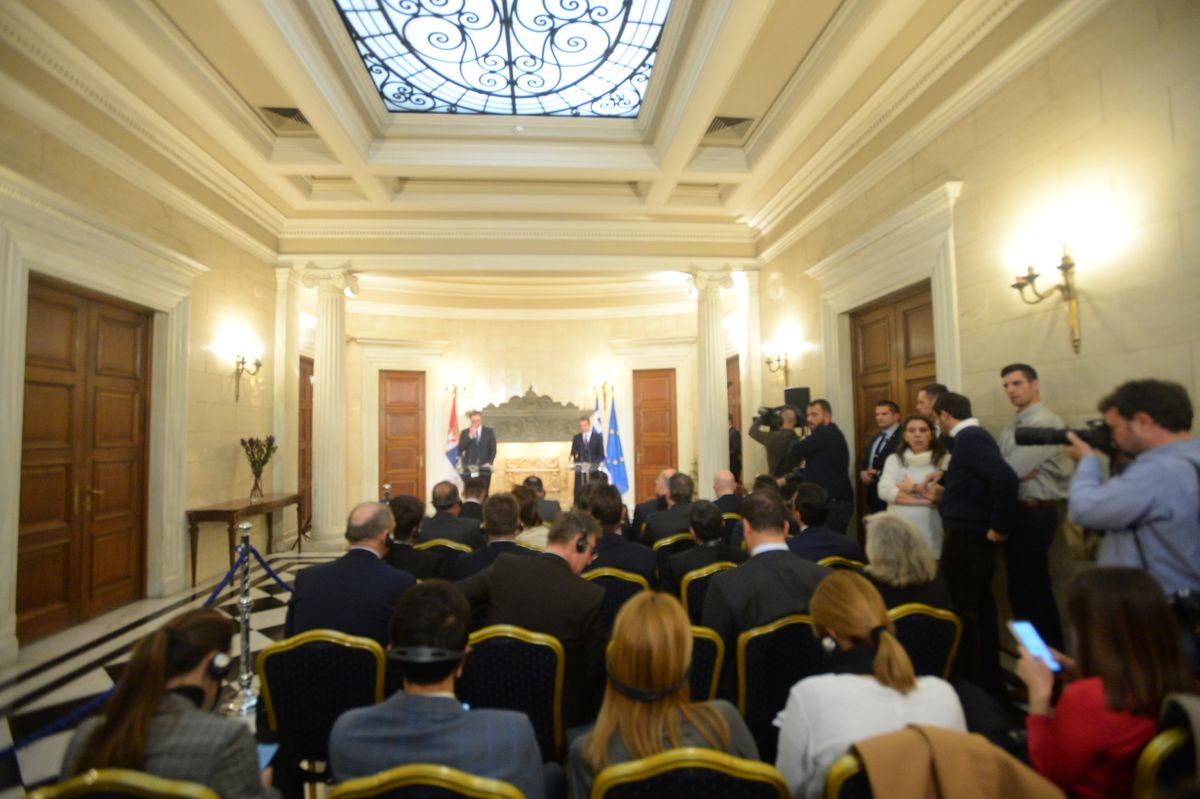 "President Vučić responded to the request of the Greek Government to host a number of unaccompanied refugee children without parental escort who currently reside in Greece. It was his initiative, which was hailed as an expression of practical support not to Greece but to the children in a tragic situation. It is very important that an EU candidate country is bravely assuming its moral responsibilities regarding this difficult problem," said Prime Minister Mitsotakis and thanked President Vučić for his generous offer.
Prime Minister Mitsotakis said that Greece remains firm in its position that Serbia belongs to Europe and that this path should be rounded off and strengthened, and that Greece will support Serbia every step on the way in the European integrations.
"I was briefed by President Vučić about the Belgrade-Priština dialogue. Athens supports the dialogue and our position on that remains unchanged. The abolition of customs tariffs on Serbian products in Kosovo and Metohija is a necessary step towards strengthening of trust between the two nations," he stressed.
Prime Minister Mitsotakis added that he also agreed with President Vučić on the need to keep the European path open for the Western Balkan countries.
"We have agreed that international law is the one that guarantees peaceful coexistence among nations with a difficult past, such as Southeastern Europe," he said.
Prime Minister Mitsotakis stressed that he had yet another cordial and fruitful conversation with President Vučić and thanked him for his visit to Athens.
Share