Meeting with ambassadors of the EU member states 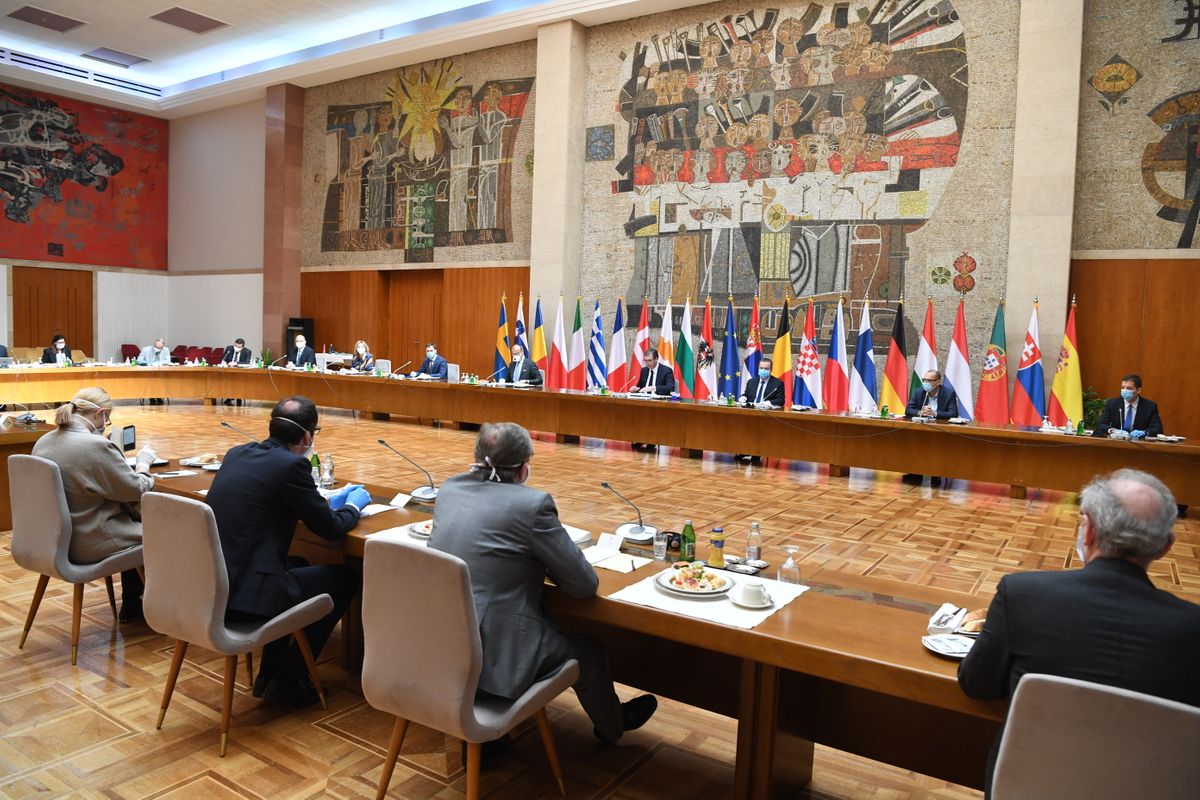 After the meeting with EU representatives and ambassadors of the EU member states, President of the Republic of Serbia Aleksandar Vučić said that Serbia is grateful to the European Union for its assistance, support and solidarity in the fight against COVID-19 and for the previous aid. The president said that Serbia remains committed to the EU path, but also reserves the right to take its own view on every issue.
President Vučić emphasised that Serbia remains unequivocally on the path to the EU, that it continues to comply with the EU rules, but that it retains the right to always express its position on every issue, following the democratic principles of the Union.
"We had a good, open and very long meeting. We talked about all the important topics," said President Vučić.
He said that all the critical matters were agreed and that specific differences were expressed only on issues related to Kosovo and Metohija, such as accession to ENTSO.
President of Serbia stressed that Serbia's position on the European path is unambiguous. 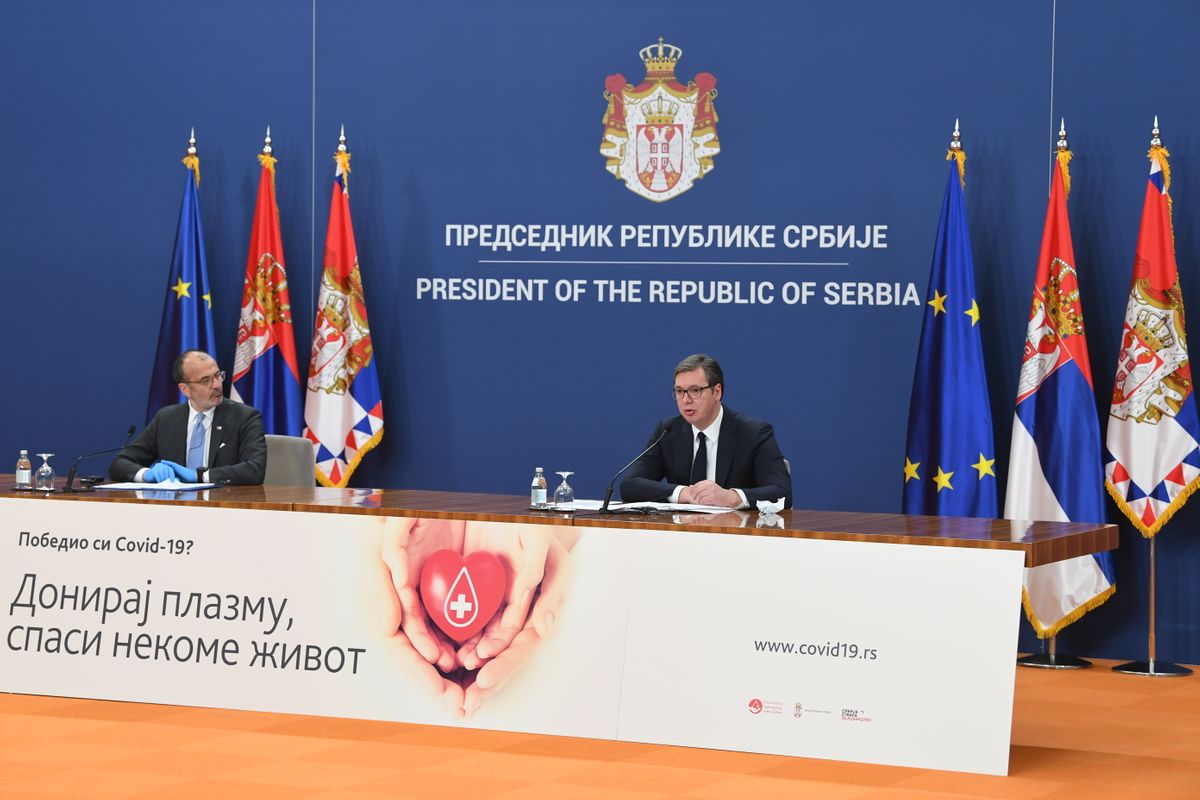 "I want to reiterate the unequivocal position of Serbia - we are on the European path, we want to organise our country according to the European standards and rules, to understand all the things that are happening in the EU, and not to ask anyone for anything. We only had different views regarding ENTSO and energy issues in Kosovo and Metohija, as well as other issues related to Kosovo and Metohija. As for everything else, we had an excellent meeting, perfect for us. Serbia will transparently continue its European path and will gladly accept all the good words coming from the EU as well as the criticism, but Serbia will give itself the right to think with its own head and to respond to such critics. Democracy belongs to everyone, and we have the right to express our opinions on any matter," said President Vučić after the two-hour meeting.
The President said that Serbia is much grateful to the EU for the financial assistance and every other kind of support and solidarity that the Union has shown in the past as it did now in the fight against the coronavirus.
"We are grateful for this financial assistance and support to the EU taxpayers and the Member States that made such a decision. That is a big deal for us, and we will always respect that," said the President of Serbia. 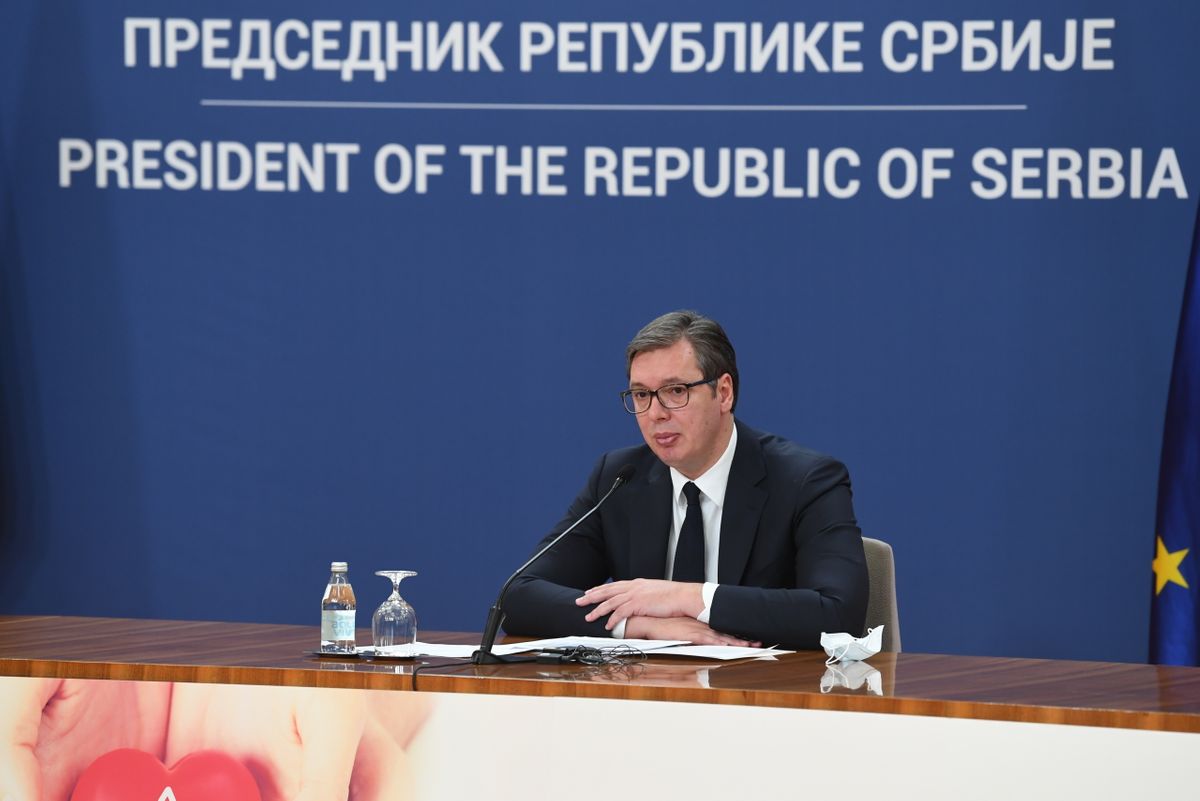 President Vučić noted that the EU had committed 93 million euros in aid, 15 million in emergency procurements and 78 million in support of economic recovery. Also, more than four million has been set aside for goods, most of which will arrive in May.
President Vučić said that Serbia now has some more protective equipment than necessary, even slightly more respirators than required at this moment, and added that we are ready, if necessary, to deliver them to within 12 hours to any EU member state.
President Vučić also pointed out the importance of economic cooperation with the EU, noting that 68 per cent or two-thirds of the trade exchange is EU-related. 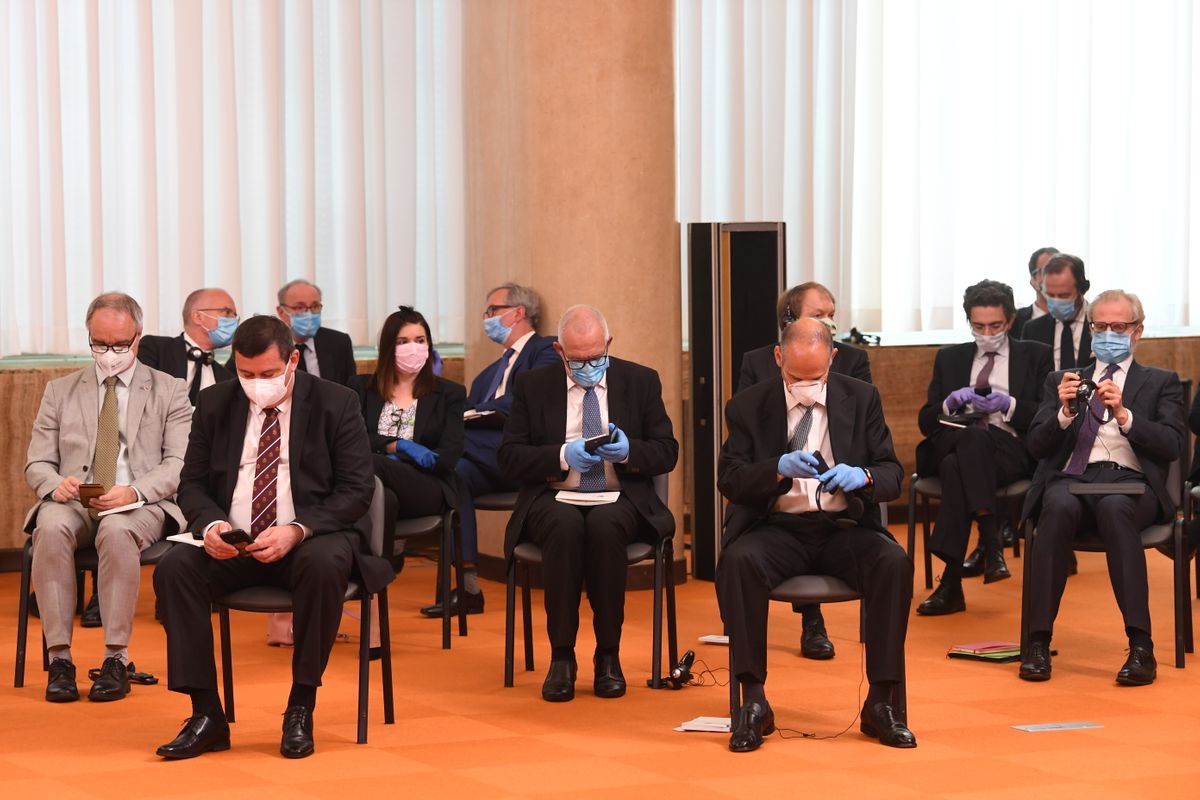 "Our total trade exchange last year was 26 billion euros, and just ten years ago it was at 10 billion euros. This shows how far Serbia is progressing, as well as our economic relationship with the EU. It also shows how dependent we are on the EU market, and that is why we are happy when the EU Council can make a decision and ambitious investment plans," he underlined.
President Vučić said that Serbia is particularly interested in companies operating in our country as well as in future investments.
"I am very grateful to EU companies that have suffered a severe blow during the pandemic and in our country, who are ready to continue their work and take care of their workers as soon as possible. Representatives of some countries said that most companies would not fire their workers, but rather take care of them. We are grateful for that, and we will seek to create the conditions, without endangering the health of the people, for the continuation of work of the companies, to keep the losses as low as possible," he stressed.
President Vučić said that over the past ten years, the inflow of investments from the Union had reached 10 billion euros, emphasising that it is of great importance to continue such trends. 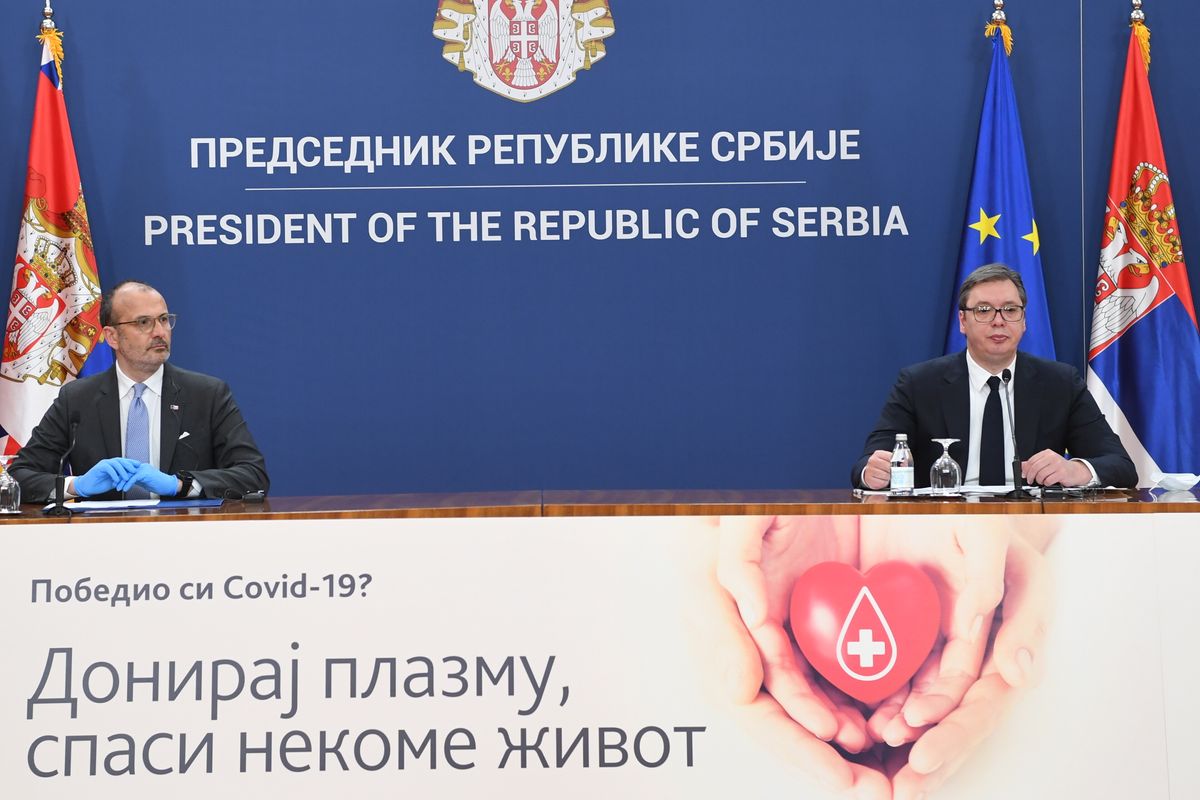 Accordingly, he announced additional packages of subsidies and incentives for the EU investors to come.
"We have comparative advantages over the other countries," he stressed.
On behalf of Serbia and its citizens, President Vučić extended condolences to all EU countries over the victims of the COVID-19 pandemic.
“People in Serbia genuinely mourn every person in the EU, and we have shown our solidarity in various situations. We are very grateful for the attention given, and we believe that in the future this solidarity will be able to be even more pronounced and even better than it was during this period," he said.
The President said that the enlargement policy was tackled at the meeting and that interlocutors thanked each other for their excellent cooperation regarding repatriation, return of our citizens to Serbia, and theirs to their countries, mainly by Air Serbia, but also by giving the buses permits to travel where necessary which all reflects that we can have a good cooperation.
He expressed gratitude for talks with the leaders of the EU countries such as Hungary, Slovenia, Croatia, Bulgaria, but also German Chancellor Angela Merkel and French President Emanuel Macron, which were of utmost importance and a great encouragement to the citizens of Serbia. 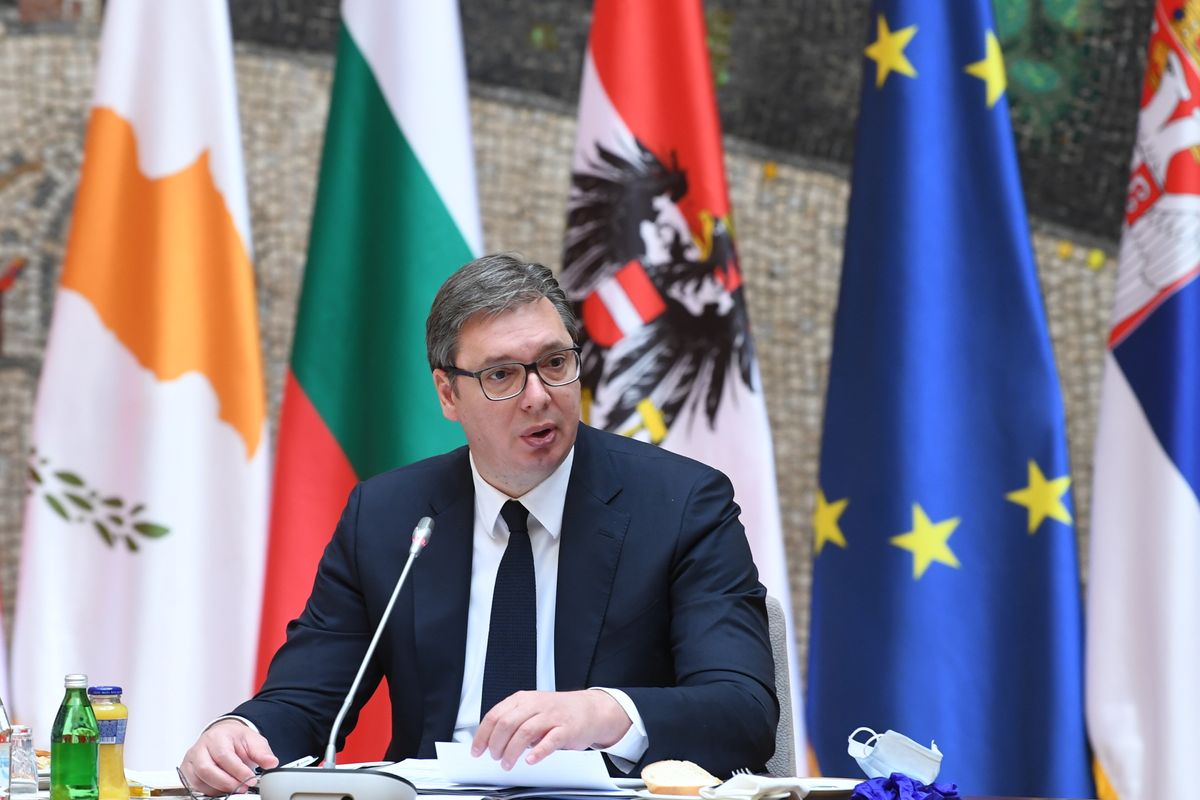 He added that he had also spoken with the Governor of the Italian province of Veneto Luca Zaia and that support was also offered to that region of Italy at times when it was difficult and critical.
"I believe that through our response in the region we have proved that we can offer our solidarity and assistance to those with whom we do not always exchange nice words," said President Vučić, thanking the European Commissioner for Enlargement Várhelyi for the outstanding assistance he provided. 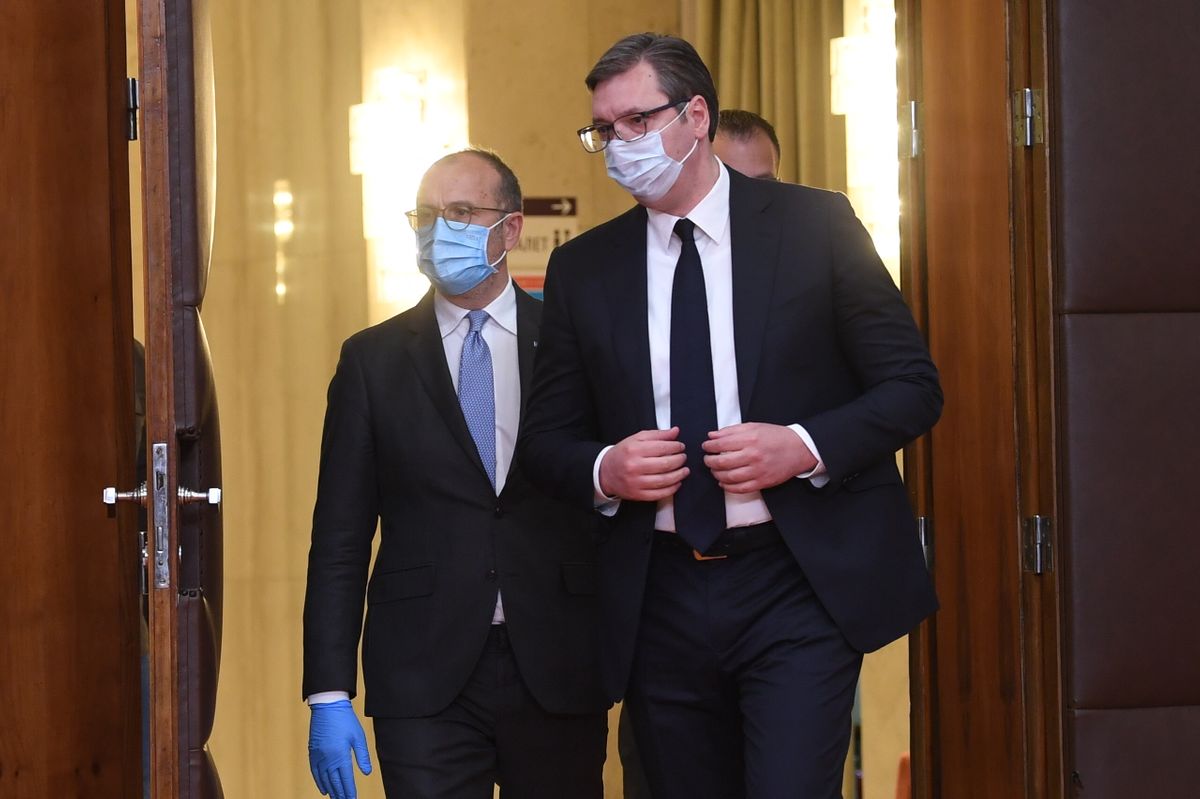