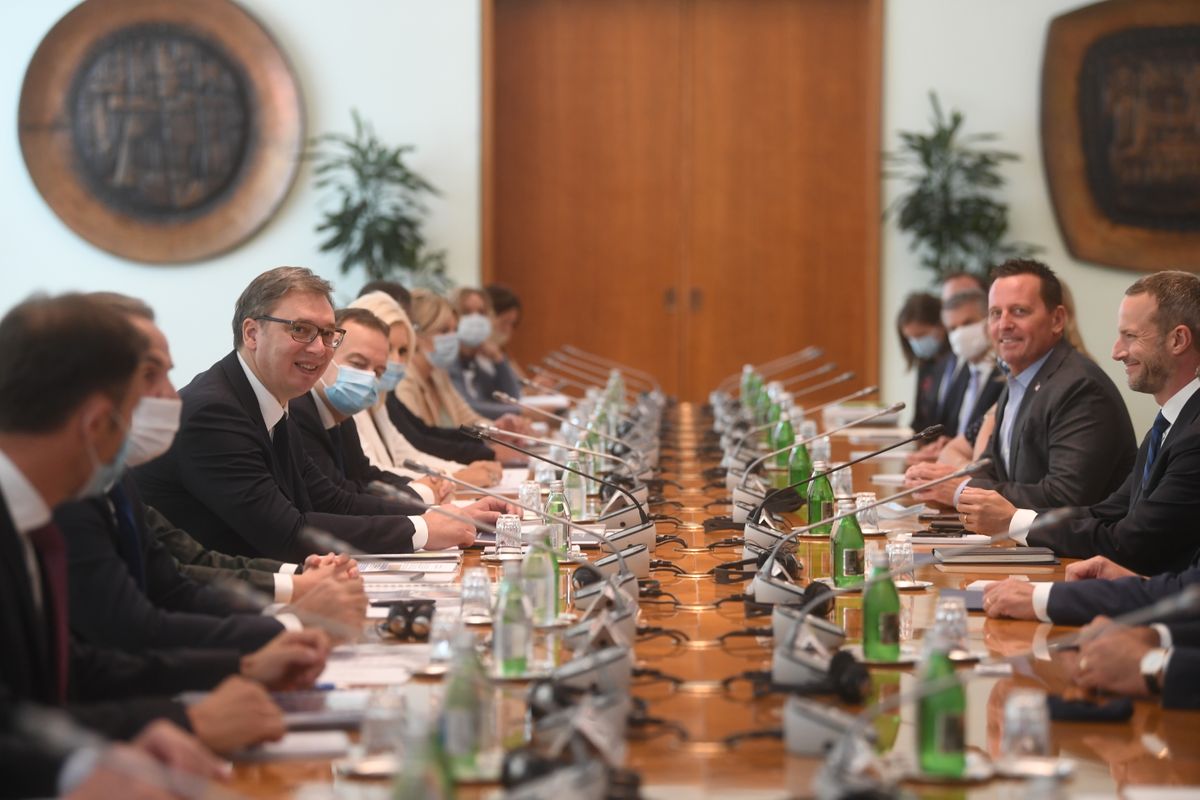 Following the talks with the high-level U.S. delegation, President Vučić said that we had not had such important agreements with the United States since 1881.
"This is an important day for us. We established our trade relations with the U.S. in 1881, and we have not had such important agreements with the United States ever since then, and 140 years have passed," said President Vučić.
President Vučić pointed out that the arrival of the International Development Finance Corporation in Belgrade is an important moment as all credit rating agencies that rank Serbia very highly shall observe it.
"Wherever the DFC is, there is a prosperous future, and this is a great signal for such a country and such a region. We are proud that their office is opening in Belgrade. We thank them for giving attention to our region and our beautiful Serbia. I am sure that we can achieve great results with our American friends," President Vučić emphasised.
President Vučić stated that a good job had been done for both - Serbian and Albanian people.

"We also discussed all other important issues. We will work fast to launch commercial flights. It is important to take care of the prosperity of our country, to take care of our people, this is a good job for all people who live together with us. We will build roads and railways. This creates a better life for people, a better economy, everything we dreamed of," said President Vučić, adding that we opened the door to American friendship and that he was particularly grateful to U.S. President Donald Trump.
The executive director of the U.S. International Development Finance Corporation (DFC), Adam Boehler, stated that the agreement signed in Washington is not only historical, but also a reflection of the fact that this country and region will not be captured in the past, but will go for the future.
"I came with representatives of six U.S. agencies. We came because we saw a commitment to change. The office will become permanent. The leaders of the countries chose the people, not political divisions. They chose jobs and economic strength, not what divided them in the past," said Boehler.
The special envoy of the U.S: President for the dialogue between Belgrade and Priština, Richard Grenell, said that the USA aspires to fulfil the promise they made earlier.
"Not only to deal with words and political symbolism but to work for the benefit of the people. I want to tell the people of Serbia to hold us accountable, not only regarding the Washington agreement but also for the three previous agreements. We are not just putting words on paper, that is pointless. Symbolism is important, but it does not put food on the table. We want to turn these promises into real jobs. We ask the people of Serbia to hold us accountable. I had to work hard, to go through many problems on both sides. We are not asking Serbia to agree with the United States on everything," Grenell said.

President Vučić also attended the signing of the Joint Statement which officially opened the DFC regional office in Belgrade that was signed by the Prime Minister of the Republic of Serbia Ana Brnabić and the Executive Director of the American International Development Finance Corporation Adam Boehler.
Share