Official Visit of the President of the Czech Republic

President of the Czech Republic Miloš Zeman arrived for a two-day visit to Belgrade where he was welcomed at the "Nikola Tesla" Airport by his host, President of the Republic of Serbia Aleksandar Vučić. 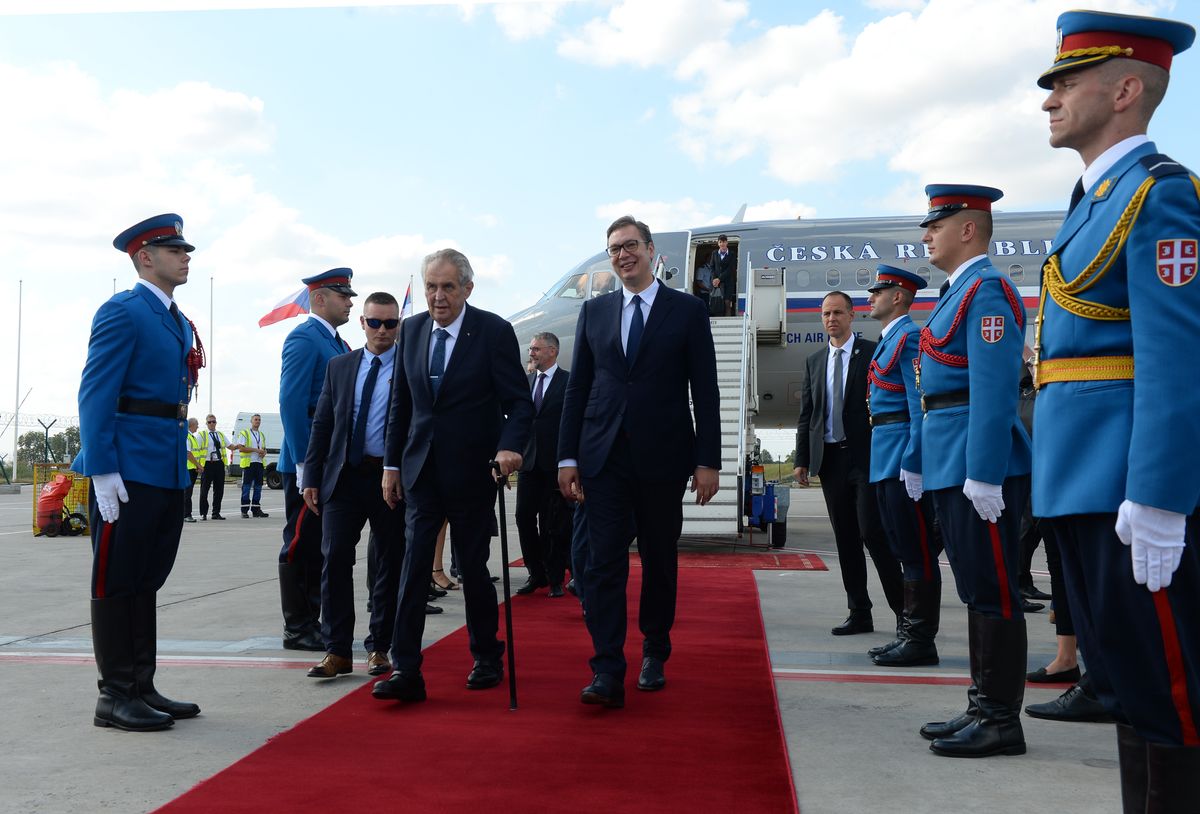 Presidents Vučić and Zeman then laid wreaths at the Monument of the Defenders of Belgrade 1914-1918 at the New Cemetery. 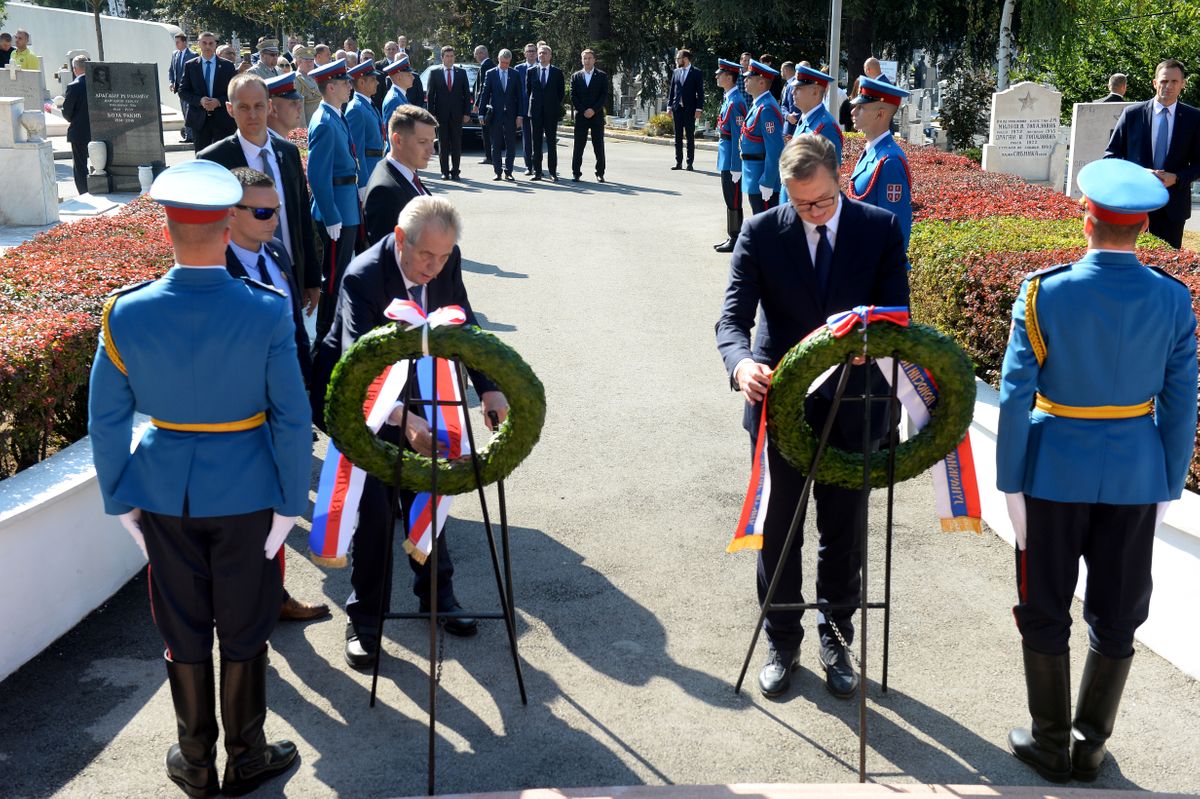 After the meeting with the Czech President Miloš Zeman, President Aleksandar Vučić said that the relations between Serbia and the Czech Republic are presently at the highest level, that the two countries have tripled the foreign trade exchange and that it will reach 1.15 billion Euros this year, and added that the cooperation can be even much better.
I had the honour to talk to a sincere friend of the Serbian people - the President of the Czech Republic Miloš Zeman. The talks were comprehensive, we tackled bilateral relations and specific problems that we can solve in a fast and efficient manner. I am grateful to the Czech Republic for becoming one of the biggest investors in our country - the fourth investor in Serbia overall", said President Vučić.
As for economic cooperation, President Vučić said that the exchange between the two countries in 2008 was 340 million Euros, whereas last year it was 1.04 billion Euros. The President added that it is expected that the exchange reaches 1.15 billion Euros this year. 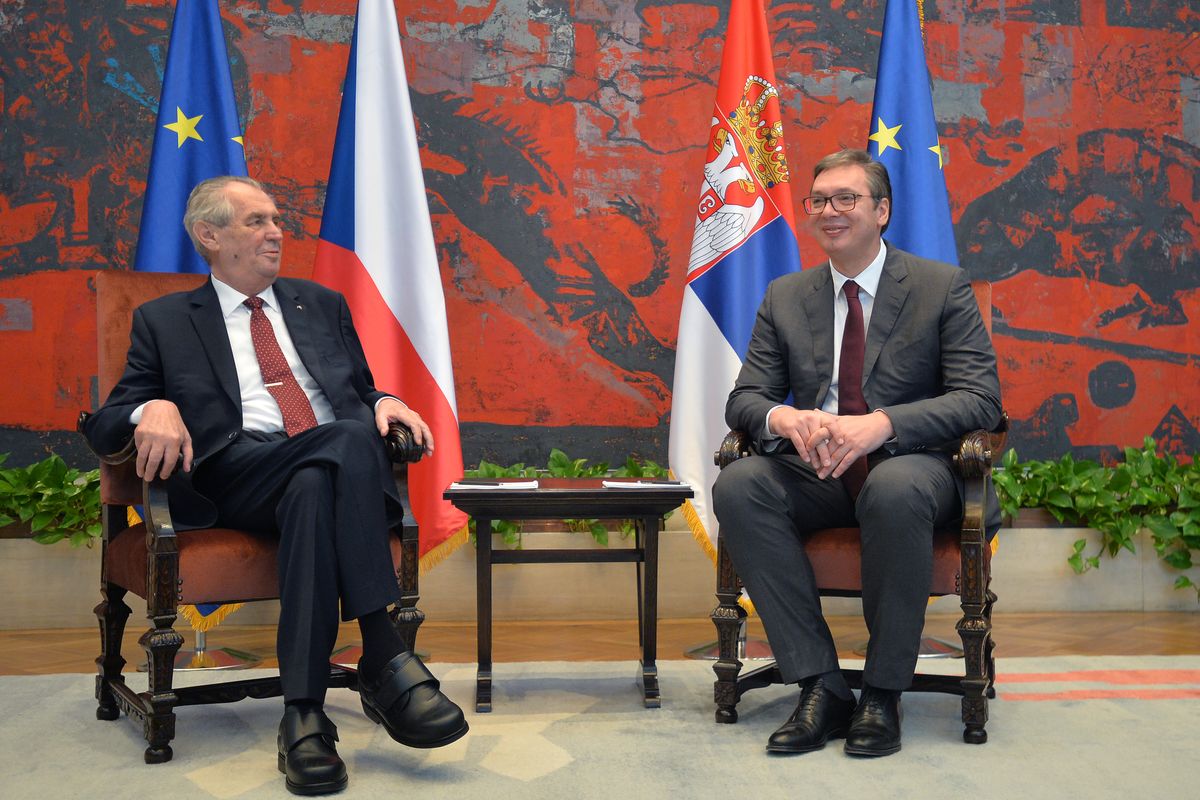 President Vučić emphasised that we work together with the Czech Republic on numerous transportation projects and that he believes that we will have many more in the future.
“Our cooperation can bring much more and we can learn much from Czechia. Czechia is the country with the lowest unemployment rate in the EU. The cooperation in the field of science, artificial intelligence and robotics is of particular importance for us. I believe that in the defence industry as well - with Zbrojovka and Tatra - we will find the joint interest for cooperation. Many options are open for us", said President Vučić and added that a business forum of Serbian and Czech companies will be also organised today.
President Vučić said that President Zeman also suggested that Serbia has to apply the "all azimuth" policy as Charles de Gaulle used to say - to observe the different sides, to pursue its European agenda, to be the part of the EU, and not to be ashamed of its good relations with China and Russia.
"He told me to be proud of it, to uphold better cooperation and that in such manner - as a country at the crossroads under numerous pressures - manage to provide the progress for ourselves and progress in the lives of our citizens", conveyed President Vučić. 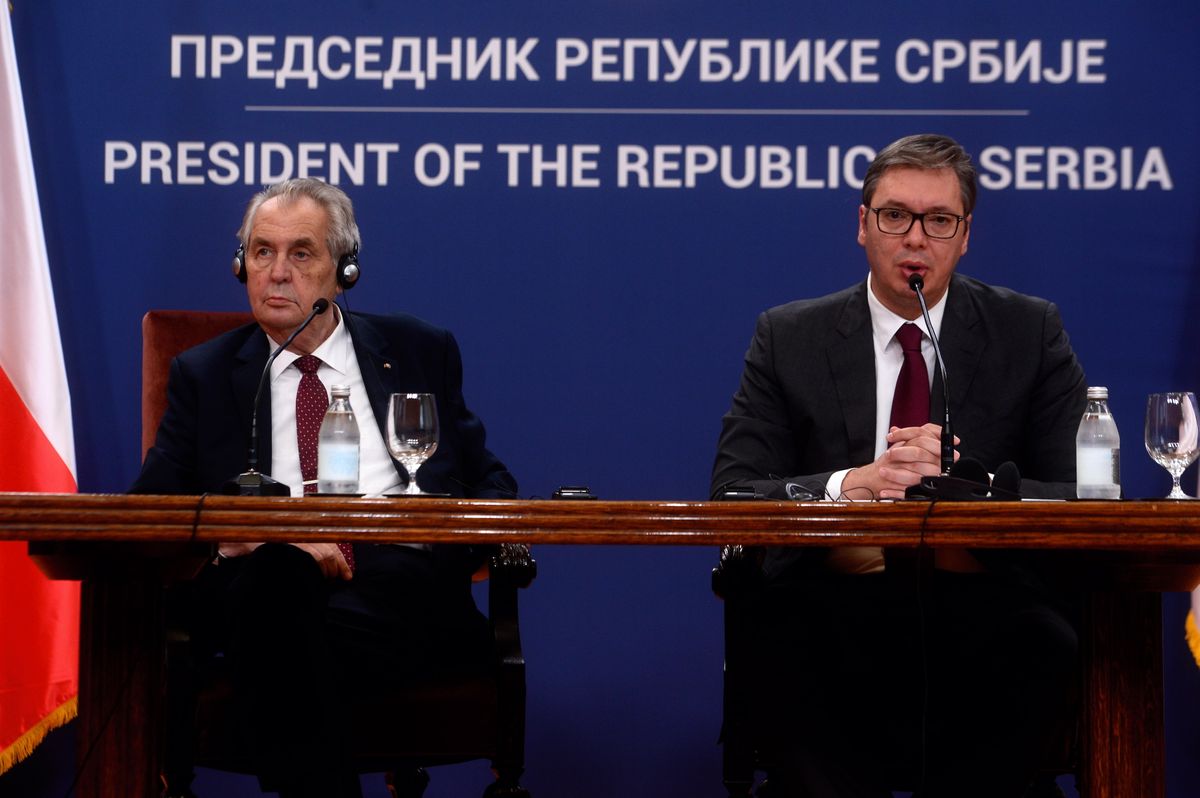 President Vučić also said that he discussed with his counterpart the European path of Serbia and the situation in Kosovo and Metohija.
“I believe we will manage to preserve the national and state interests of Serbia in spite of numerous challenges, and that at the same time we will provide a better life for our citizens. President Zeman does not hide that he truly loves the Serbian people and our country and I am very grateful to him for that, such people are rare. Thank you for your visit and I wish you to feel in Serbia as in your own home", said the President of Serbia.
The Czech President Zeman said that he deeply appreciates the friendship of the Serbian and Czech people and emphasised the importance of the economic cooperation between the two countries.
As he said - both countries are medium-size states and both share the common destinies.
According to his words - businessmen cannot be forced by anyone to come unless they want to do that by themselves. 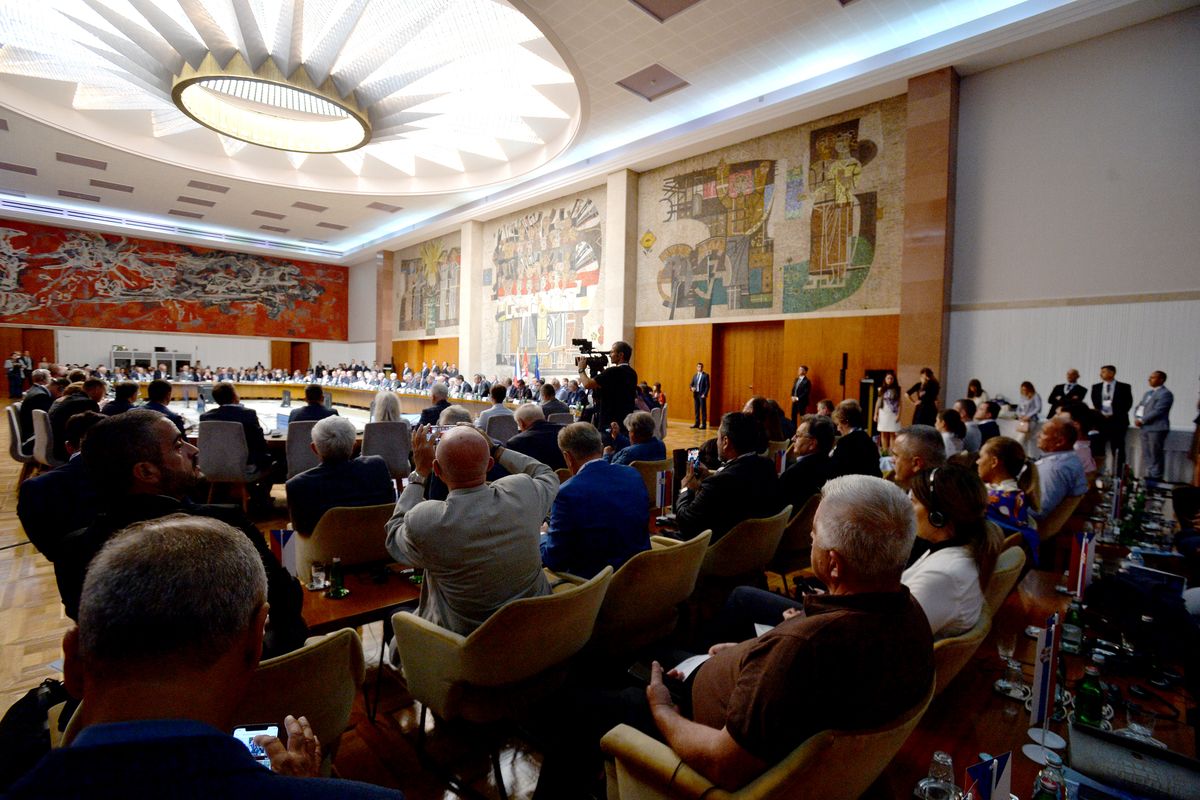 "Fifty top businessmen arrived from Czechia and will attend the business forum together with another 180 Serbian counterparts", said President Zeman and added that the Czech delegation informed the President of Serbia about all the issues related to the mutual cooperation.
"I am also personally surprised how deep that cooperation is", said President Zeman.
When asked if Serbia may expect that any of the EU countries would reconsider and revise its position regarding the independence of Kosovo in the coming period, President Zeman said he is not a dictator and that he cannot impose his standpoint, but what he can do is to pose the question at the counselling of the authorities in about a month time whether it is possible to withdraw the recognition.
„I am glad that the Minister of Defence Lubomir Metnar said that recognition of Kosovo was a mistake. He will probably be on my side, and who will be on the other side - we shall see", said President Zeman. 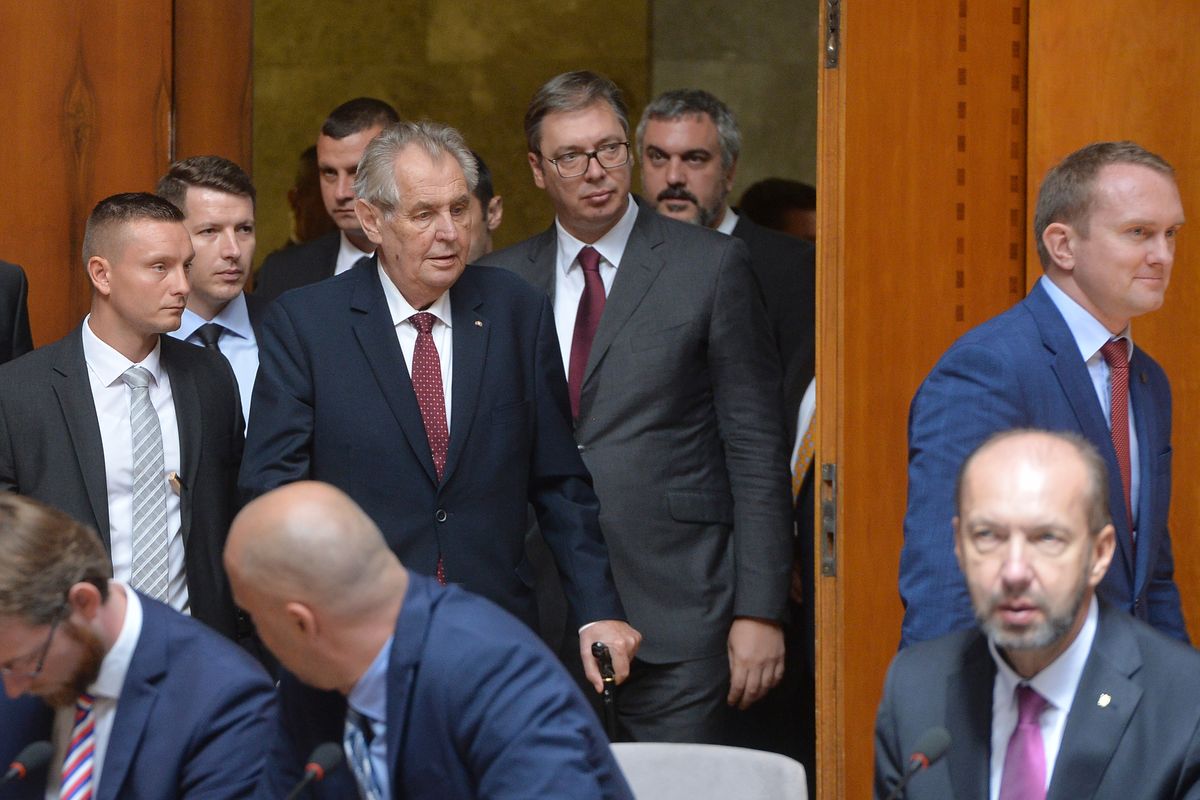 President Vučić emphasised that Serbia is grateful to President Zeman for his position regarding Kosovo and Metohija and conveyed that he informed Zeman about the problems we encounter.
President Vučić added that the voice of President Zeman can be heard far and wide and that his words will more and more reach the audiences in Europe as people tend to understand that things are not black and white as they were being presented.
He said that President Zeman invited him to the Višegrad Group meeting to be held on the 3rd October in Prague, where he will be the only president from the region which indicates how much President Zeman respects our country.
President Vučić previously prepared a welcoming ceremony for the President of the Czech Republic, followed by a tête-à-tête meeting of the two presidents, and subsequently the plenary meeting with the members of the two delegations. 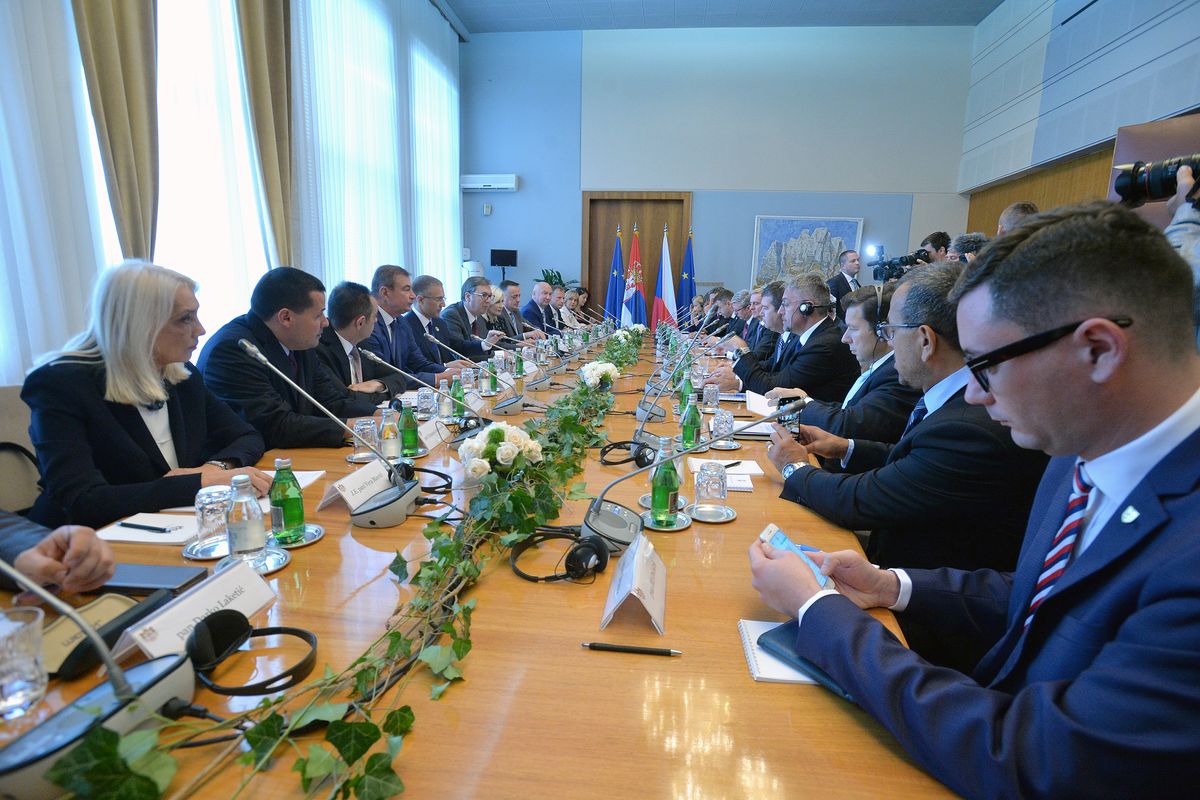 Within the scope of the Czech delegation visit, the Ministers of Serbia and the Czech Republic signed two agreements on cooperation in the presence of President Aleksandar Vučić and President Miloš Zeman.
The cooperation agreement between the Governments of Serbia and Czechia in the area of defence was signed by the respective Ministers of Defence - Aleksandar Vulin and Lubomir Metnar.
The Memorandum of Understanding between the Cabinet of the Minister responsible for innovations and technological development in the Government of Serbia and the Ministry of Industry and Trade of the Czech Republic regarding the cooperation in the fields of innovations, artificial intelligence and robotics, was signed by the Ministers - Nenad Popović and Karel Havliček respectively.
Share