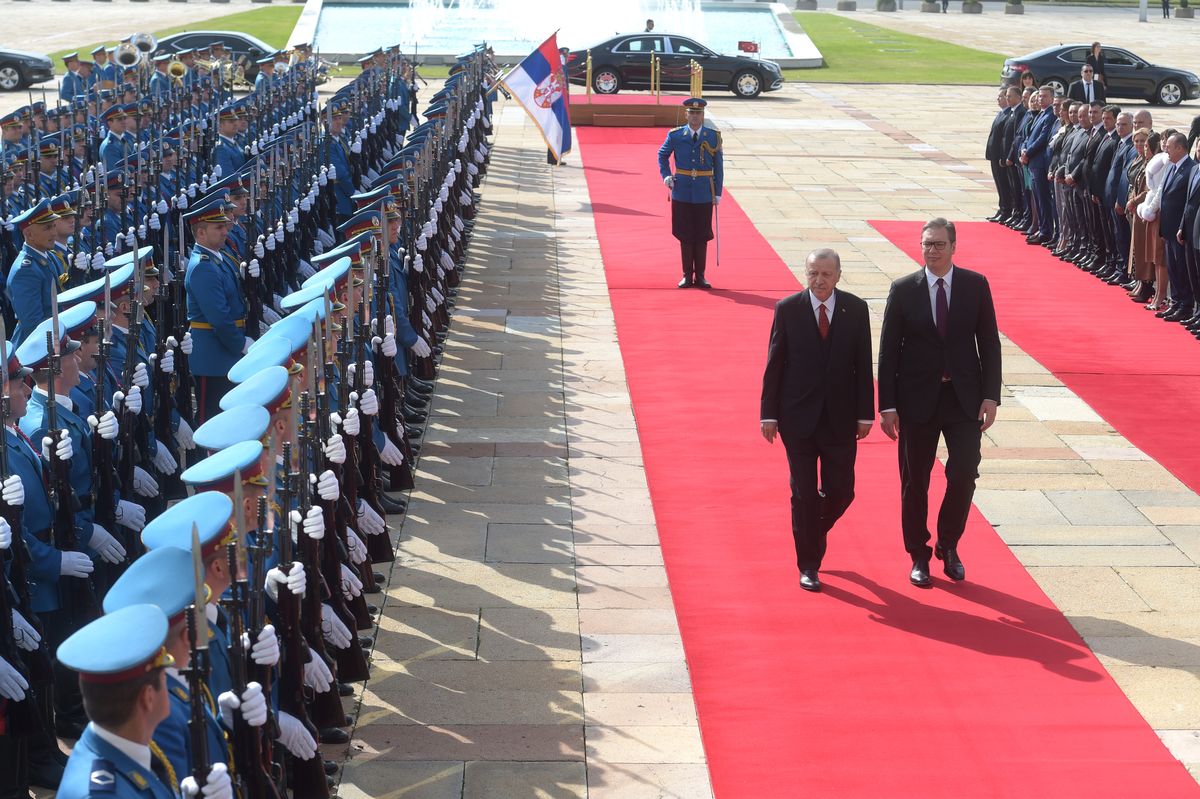 President of the Republic of Serbia Aleksandar Vučić and his Turkish counterpart Recep Tayyip Erdoğan expressed the confidence that the bilateral relations of the two countries and their economic cooperation - which have advanced during the last several years - will be even better in the future.
Our most important common political objective is the peace in the Balkans, said President Vučić after the talks with President Recep Tayyip Erdoğan and added that under such circumstances the economy grows faster, and the economic cooperation between Serbia and Turkey - as the President emphasised - progresses dramatically.
„I express my most sincere pleasure because of the repeated visit of the President of Turkey to Serbia. I hope he will be visiting us more often, as each of his visits additionally promotes the development of our relations, it dramatically improves the trade exchange, it means a higher respective visit of tourists, incites cultural exchange and exceptionally improves the cooperation in all areas", said President Vučić and added that this time they are jointly celebrating 140 years as of the establishment of the diplomatic relations. 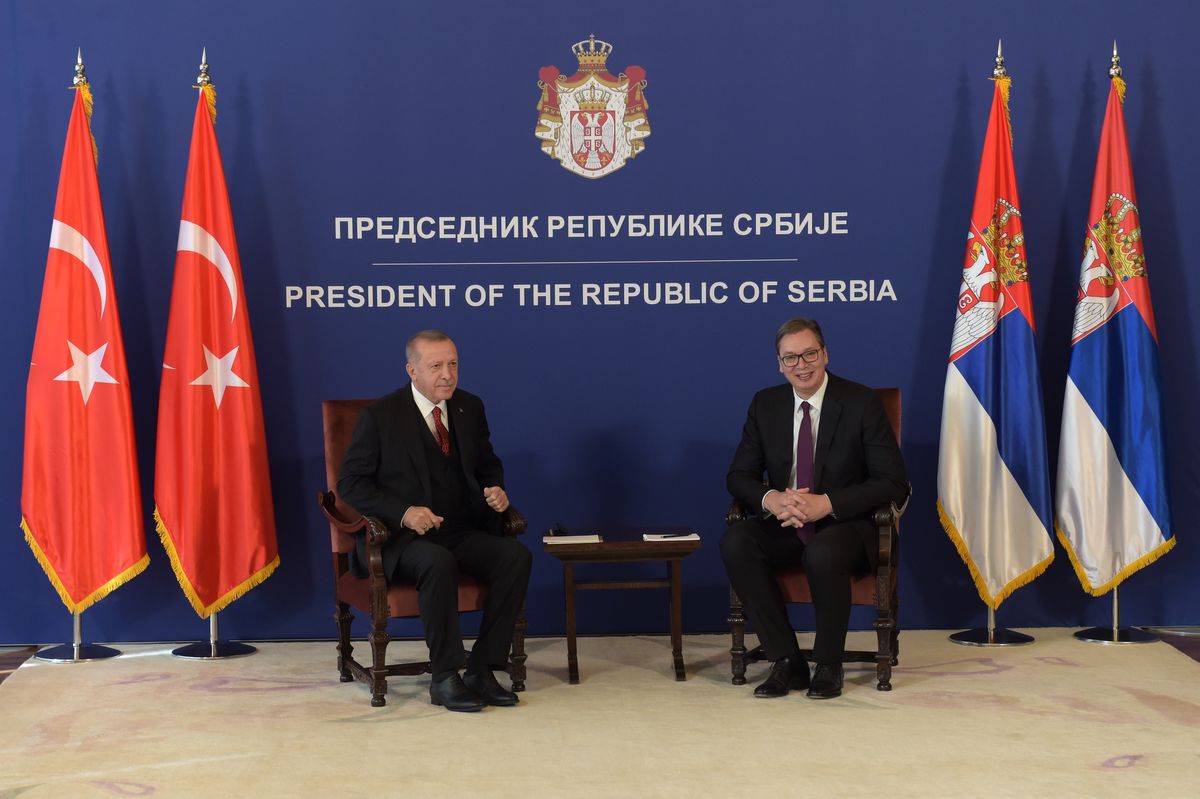 President Vučić said that he had an opportunity to talk tête-à-tête with President Erdoğan for about an hour and a half and that he heard and learned many things from him.
„Importantly, we confirmed that we made an exceptionally extensive advance in economic cooperation. When President Erdoğan visited Serbia last time in 2017, the trade exchange between Turkey and Serbia was a bit higher than 800 million Euros. Then we said that the first objective was to achieve one billion", said President Vučić.
He said that the trade exchange already achieved 1.084 billion Euros last year, while in the first eight months against the same period in 2018 - the exchange is higher by 13 per cent.
„This indicates the dramatic growth trend in the relations between Turkey and Serbia. Serbian import and export are also on the rise. If compared to 2009, the export increased by 7.8 times. The volume of our export back then was 32.1 million Euros, whereas today it reaches 252 million Euros. Of course that Serbian import multiplied and now it exceeds 750 million Euros", said the President.
President Vučić expressed his particular gratitude to President Erdoğan because Turkey again facilitated the export of beef to Turkey wherefrom we gained the income in the amount of 25 million Euros, and now we have the opportunity to earn 35 million Euros.
As the President pointed out, this terminates the decline in livestock production where we can presently see the progress.

The President also thanked the Turkish investors who invest in the places with higher unemployment rates and in the underdeveloped regions thus helping the extensive development of these places.
The President emphasised that the tomorrow's trilateral summit with the President of Turkey Recep Tayyip Erdoğan and the representatives of Bosnia and Herzegovina is of particular importance, especially in the times when everything is quite fragile and when one spark can generate many problems in the region.
„It is of utmost importance for us that we can talk to Turkey and with Bosnia and Herzegovina. There are suggestions to organise a quadrilateral meeting next year by summoning the Russian Federation as well. I think it is possible to hold such a summit", explained the President.
President Vučić said that the meeting with Bosnia and Herzegovina - as the country with which we have the highest trade exchange in the region and with the participation of such a super-power like Turkey - remains to be of particular importance for us.
„Any so outstretched arm and well-intentioned position of Turkey is of the utmost importance", underlined the President.
The President of Serbia thanked the Turkish Chief of State for the very good bilateral relations adding that they reached the highest of levels in modern history. 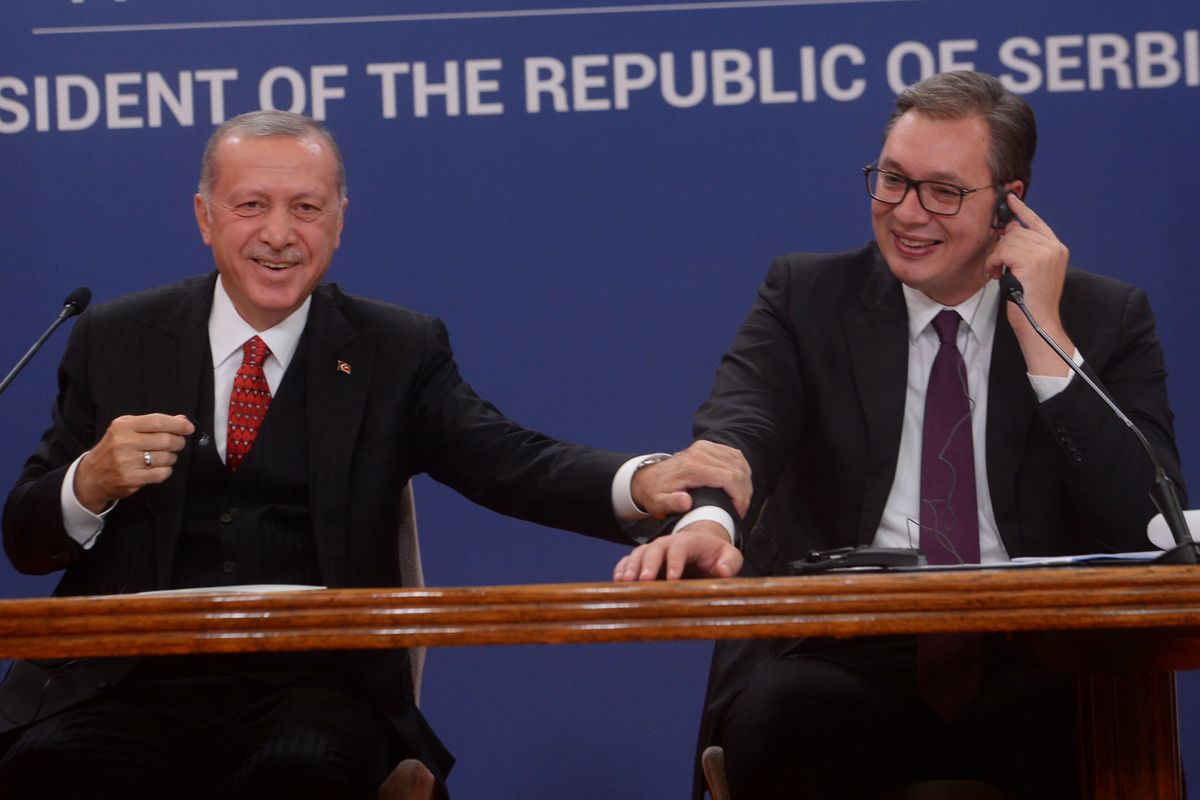 "We are happy to have the opportunity to host you in Serbia today. Please, feel at home here", said President Vučić.
President of the Republic of Turkey Recep Tayyip Erdoğan said that Turkey supports the peace in the Balkans and that it will proceed with its investments in Serbia.
"Based on my visit - six factories will be built. The renewed trade agreement has recently come into effect. I outlined a new objective with Vučić regarding the trade exchange and it is two billion dollars in short-term", said President Erdoğan.
He estimated that the relations between the two countries are outstanding which was contributed to a high extent by his host - the President of the Republic of Serbia Aleksandar Vučić.
President Erdoğan added that he assigns considerable significance to the trilateral meeting of Serbia, Bosnia and Herzegovina and Turkey which - as he said - has not been held for a long time.
Turkey plays and will continue to play a constructive part in the stability and well-being of the Balkans, said President Erdoğan and added that his country supports the Euro-Atlantic course of the region.
"Our country will continue to work on providing support to the peace in the Balkans and on leaving the existing problems behind. We will hold the trilateral meeting of Turkey, Serbia and Bosnia and Herzegovina which has not been held for a long time. We shall launch the project of the Belgrade-Sarajevo highway. It will be the bridge of peace which will connect the hearts of the people", said Erdoğan.
At the joint press-conference with the President of Serbia, President Erdoğan said that he is glad that Serbia agreed to open a consulate of Turkey in Novi Pazar and emphasised that he hopes it will be beneficial for all.
Erdoğan thanked Vučić for his hospitality and wished that all projects initiated during his visit will be useful. 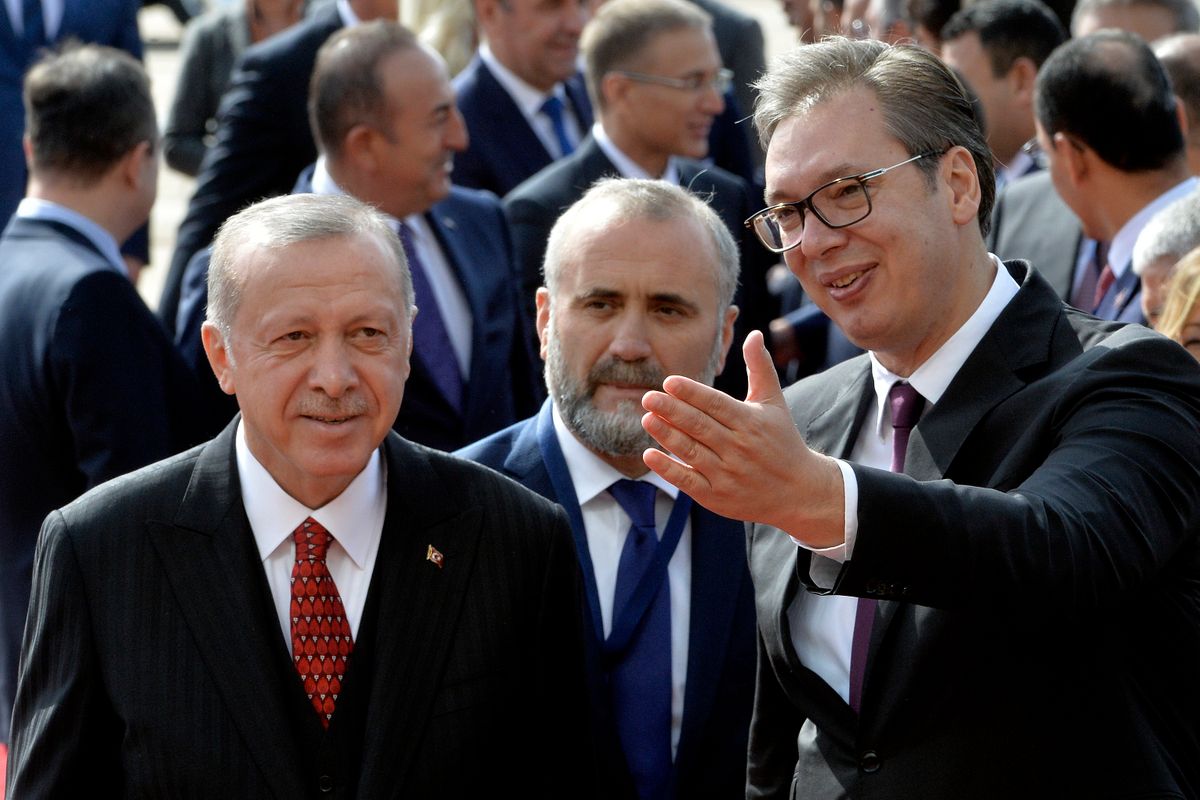 Trilateral Summit of Serbia, Bosnia and Herzegovina and Turkey 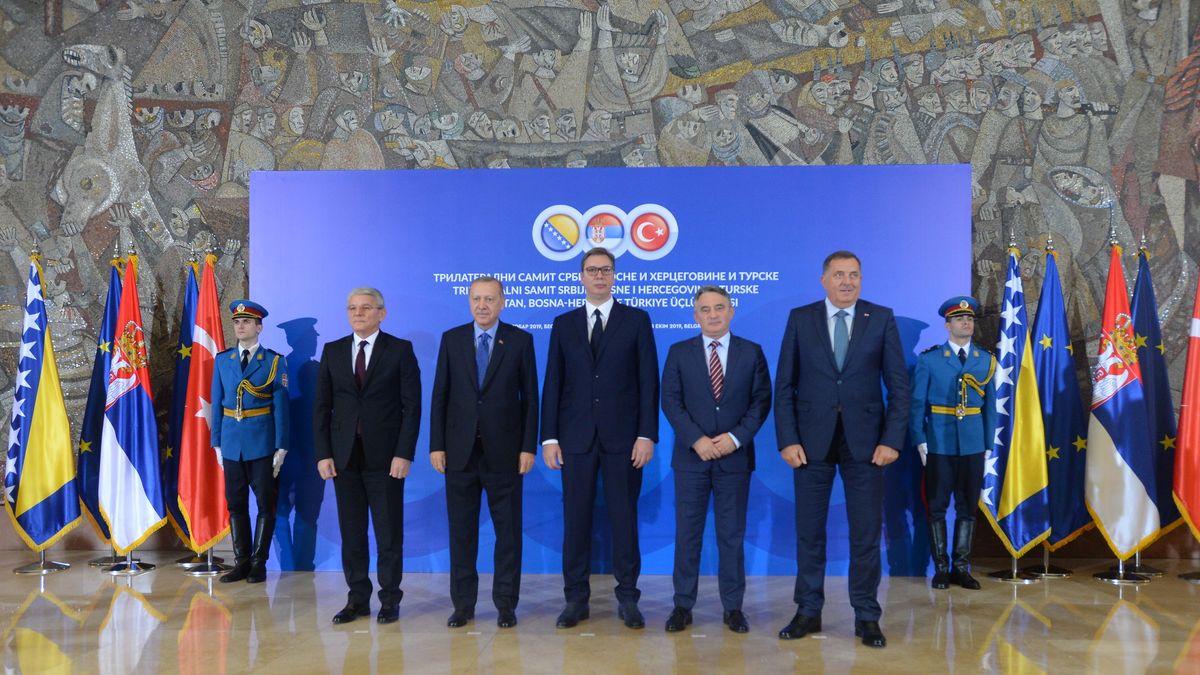 President Vučić emphasised that this is an important day for Serbia and Belgrade because as of 1945 - as all agreed - "there was an invisible hand that was preventing the building of communication ties between Serbia and Bosnia and Herzegovina".
"Now is the time for all that to be changed. This is a great day for us and we provided the funding for the Kuzmin-Sremska Rača project. The bridge over the Sava river will be constructed entirely from our assets", said President Vučić and added that the project will last for three years due to the bridge construction. President Vučić explained that through this project we connect to Bijeljina, the second biggest city in the Republic of Srpska, while the road will also reach Brčko and Tuzla.
The President added that the Belgrade-Sarajevo highway will be excellent for the trade relations which keep increasing year-by-year.
"We have been reviewing maps today where we drew highways and railways. We are not going to tell precisely about the locations, but we looked at the maps with pleasure deliberating how to improve the lives of the people. All the projects we talk about are the projects of connection between people. When you connect the people, then they think about the better living standard instead of quarrelling" said the President. 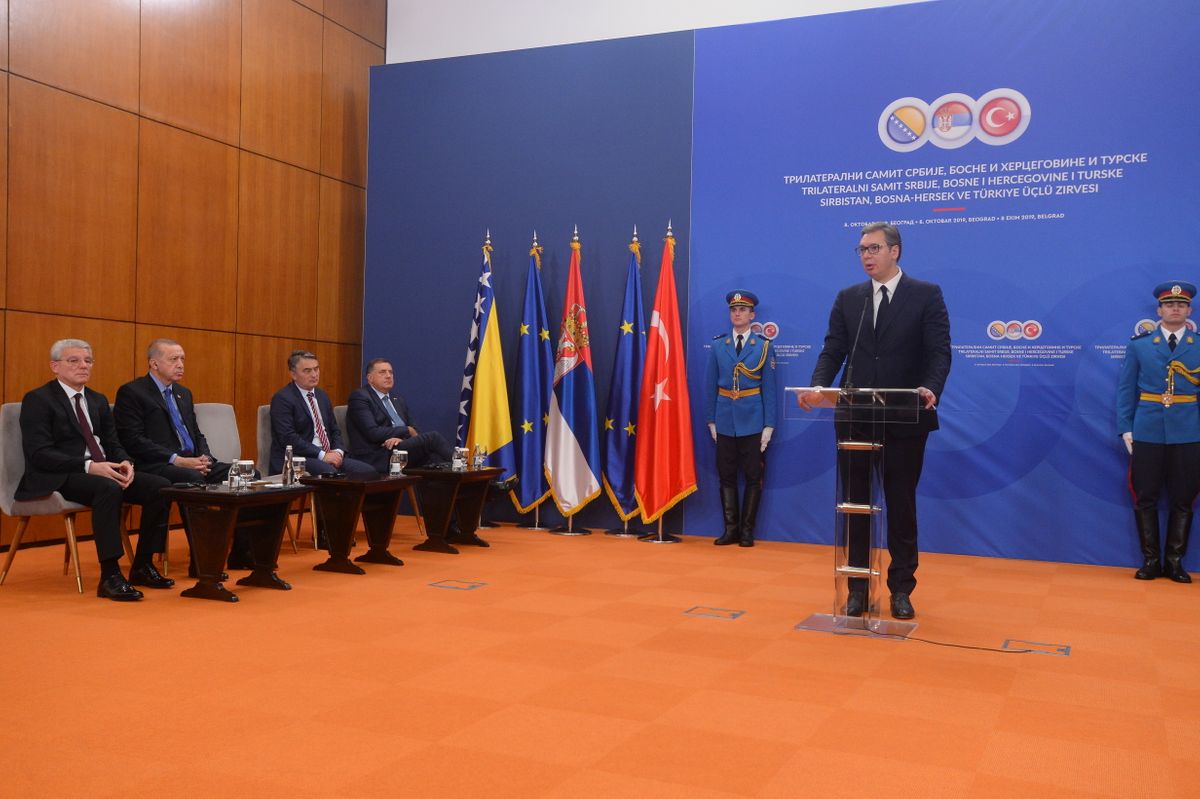 President Vučić emphasised that because of that, this ring which should connect Belgrade and Sarajevo has particular importance.
As he said, it would connect Serbs from Belgrade with the Serbs in Gacko, Nevesinje, Bileća and Trebinje, but also the Bosniaks from Novi Pazar and Tutin with the Bosniaks in Sarajevo as well as Serbs and Bosniaks.
"We would connect and thus have incomparably better communication. In merely three hours of regular drive, we would be in Sarajevo", said the President and added that the people would be better connected when the highway is finished which will also yield better results. "I believe that we have commenced a very good job today", said the President of Serbia. 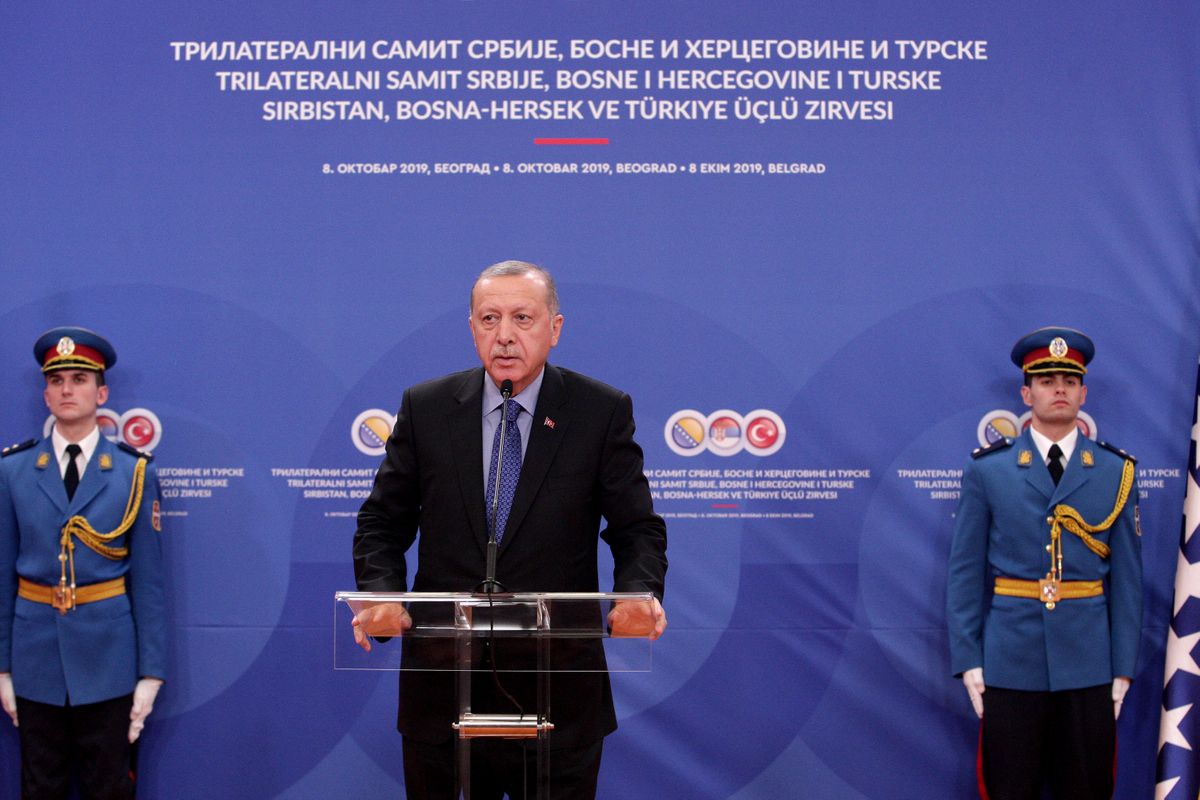 President of the Republic of Turkey Recep Tayyip Erdoğan said that the today's Summit Serbia-Turkey-Bosnia and Herzegovina was fruitful, that the leaders of the states are decisive to continue with the trilateral mechanism, and that the most important thing above all is the concern about the entire region.
The next meeting will be held in Bosnia and Herzegovina, and then in Turkey. "We are decisive to continue with the trilateral mechanism. Speaking of Serbia and Bosnia and Herzegovina and their citizens - this will draw the people and these two countries closer. And the most important point of today's meeting is that the whole region is being observed", said President Erdoğan.
Turkish President emphasised that the Belgrade-Sarajevo highway will make Serbia and Bosnia and Herzegovina even closer. "Road is a synonym for civilisation, for life. If we have a road between two peoples, that will affect the lives of citizens even more, and even more so - it will prevent migrations. To the contrary, it will make the region a place which attracts people and they will not be leaving their homeland anymore", said President Erdoğan.
He thanked President Vučić for his hospitality and added he was looking forward to the next meetings. "After our meetings that were focused on the relations between Serbia and Turkey and which were beneficial and productive, this summit today was very fruitful as well and that makes us all very happy", said President Erdoğan. 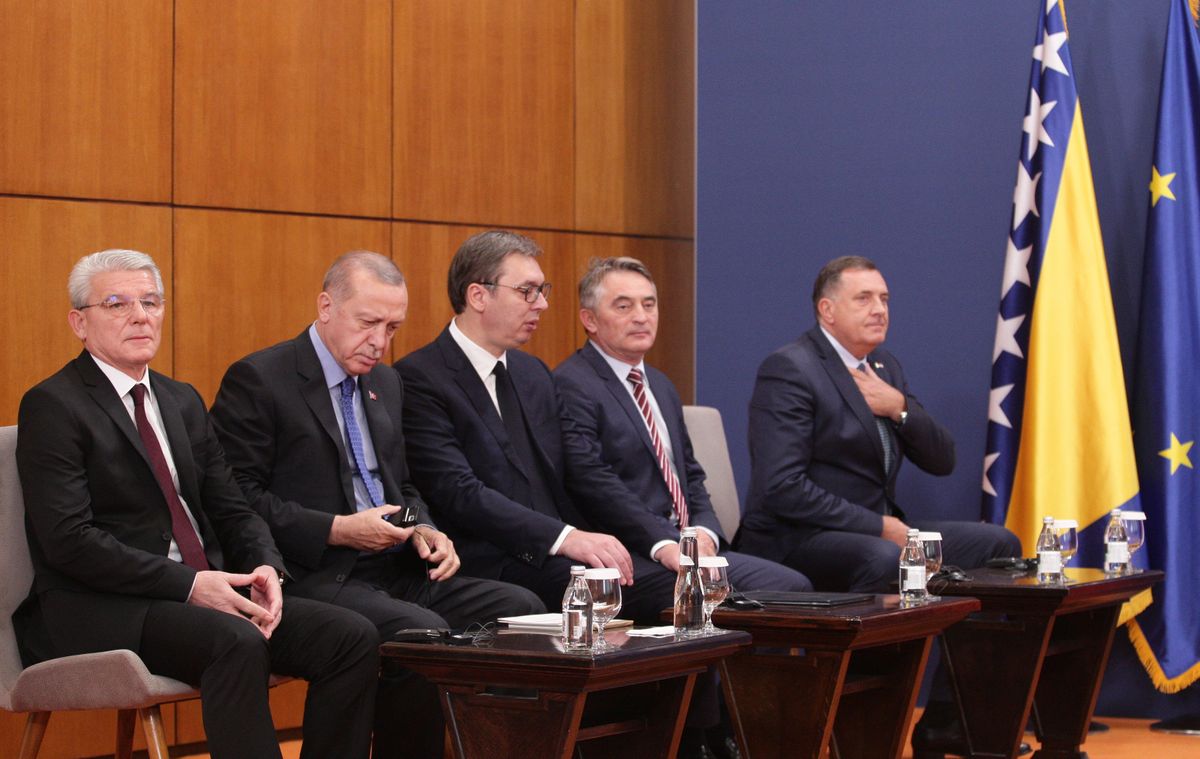 The Belgrade-Sarajevo highway will connect the Republic of Srpska, Serbia and Bosnia and Herzegovina and will facilitate better communication, agreed the three members of the Presidency of Bosnia and Herzegovina - Milorad Dodik, Šefik Džaferović and Željko Komšić after the trilateral summit of Serbia, Turkey and Bosnia and Herzegovina.
Serbian member of the Presidency Milorad Dodik emphasised that this is a good forum and good form of cooperation and added that he is ready to continue the talks of the three countries in the forum and that it is necessary to preserve the good political cooperation and stability and peace. He told the media that the meeting also tackled some other development projects such as the gas-pipeline Turkish Stream in which the Republic of Srpska is interested, and conveyed the readiness for work on other investment projects such as modernisation of railways.
The Bosniak Presidency member Šefik Džaferović said that Turkey is the stabilising factor in the region and that Serbia and Bosnia and Herzegovina should solve their open issues through dialogue. Construction of the Belgrade-Sarajevo highway is common to all of us, added Džaferović, and said that its start will be made official today in Serbia. He pointed out that Serbia has completed its obligations and that it launches the construction. "As for Bosnia and Herzegovina, it is necessary that we institutionally define and after that conclude the contracts with Turkey and with Serbia so that we can implement this project. This is the most important point for me after this meeting", said Džaferović.
Chairman of the Presidency of Bosnia and Herzegovina Željko Komšić thanked President Vučić as the host and President Erdoğan for the opportunity to talk in Belgrade about the issues concerning the joint projects of the three countries. He added that the dominant topic was the construction of the Belgrade-Sarajevo highway as well as possibilities of funding and ways to implement the project.
"It is a demanding project as these projects are costly, but also useful in multiple ways because they connect the two countries and their citizens. They are particularly important for Bosnia and Herzegovina because they also facilitate interconnectedness within Bosnia and Herzegovina along certain routes that are not sufficiently developed", said Komšić. He added that he hopes for the continuation of meetings like today's summit and that a new range of topics will be opened, while the bilateral issues will be tackled at bilateral meetings. 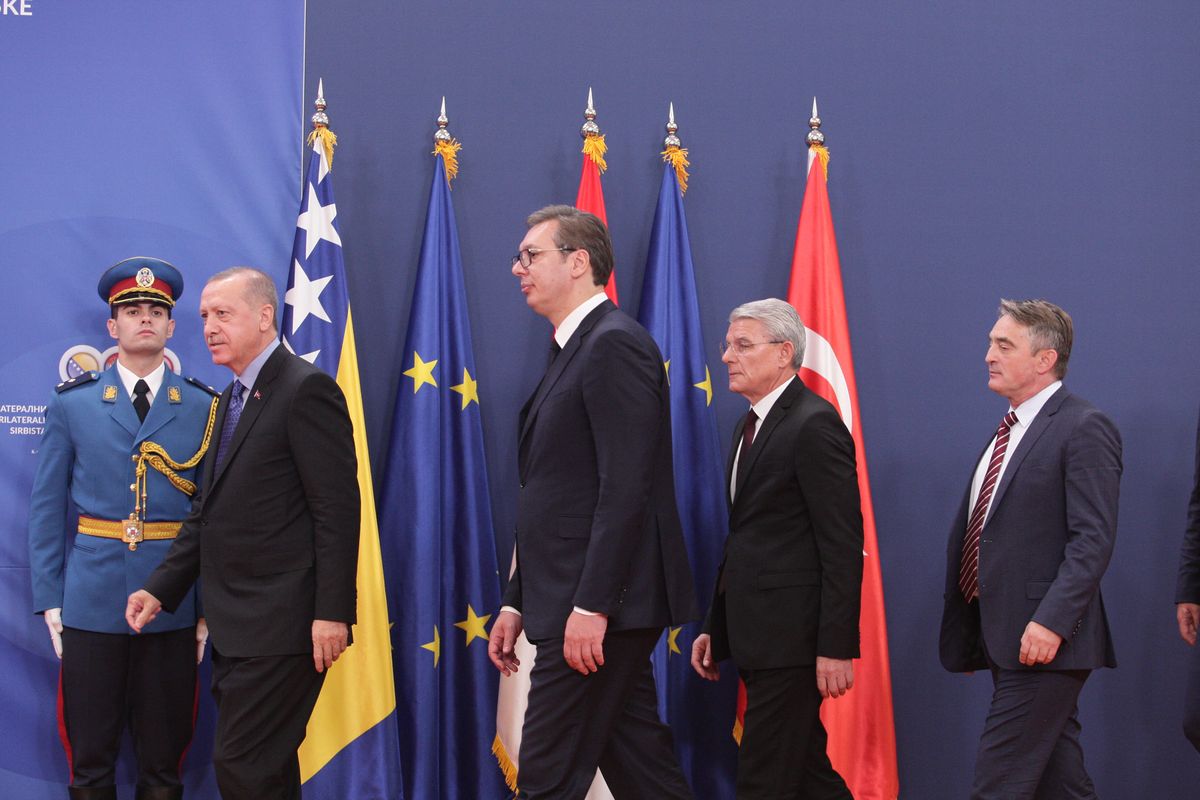