President Vučić on the official visit to the Hellenic Republic

The President of the Republic of Serbia Aleksandar Vučić is staying for a two-day official visit to the Hellenic Republic where he met today with the President of the country, Prokopis Pavlopoulos, to discuss the improvement of bilateral cooperation, as well as the key issues for both countries.

Greek President Pavlopoulos welcomed President Vučić with the highest state honours after the Serbian President laid a wreath at the Monument to the Unknown Hero in Athens. 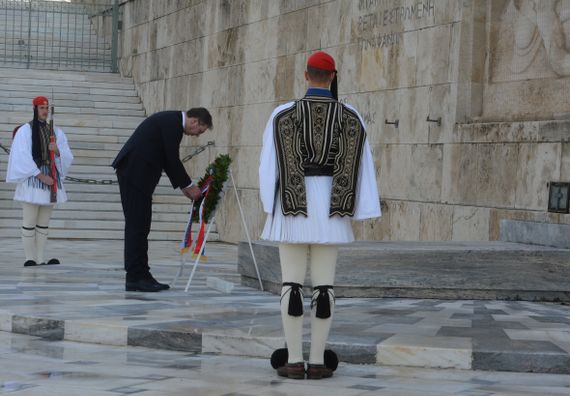 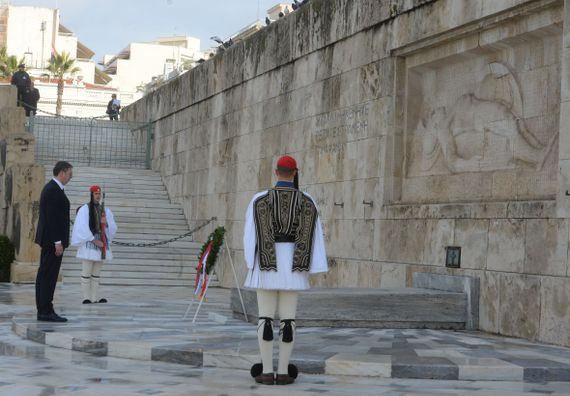 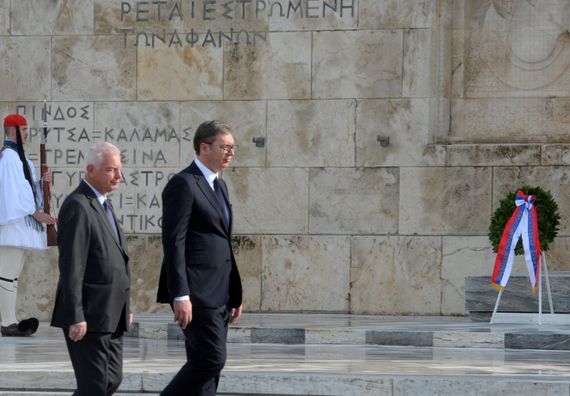 “Many thanks for your hospitality and kind words. Serbia and Greece are friends, and our job is to make us even better friends and to be even closer to each other in the future. For centuries, the Serbian and Greek people shared a common destiny and were side by side when it was most difficult," said President Vučić at the beginning of talks with President Pavlopoulos, adding that today Serbia and Greece have very good bilateral relations and that trade exchange between our countries has again gained momentum. He thanked the President of Greece and the Greek people for supporting the territorial integrity of Serbia and for supporting the European path of our country. 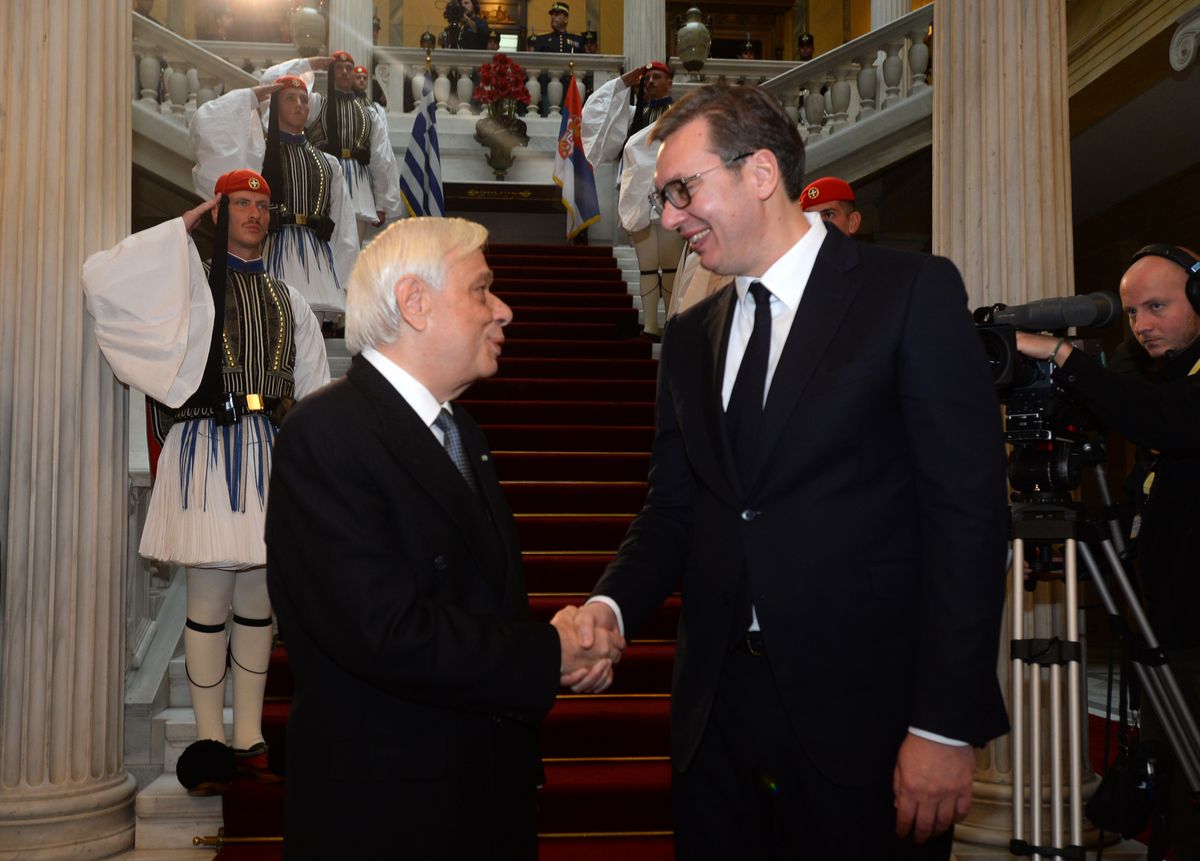 "All the reforms we are implementing are being performed to the benefit of our citizens and that is why we want them to be fully realised so that we can live in a democracy, have a good judiciary and live up to the European standards. Thank you for observing the interests of Serbia, the closeness of Serbia and Greece, and we hope that your visit to Belgrade will effect even better relations to our countries," said President Vučić.
President of the Hellenic Republic Prokopis Pavlopoulos emphasised that the exceptional and productive relations between our two countries are based on the long friendship of the Serbian and Greek people, which underlies a common Orthodox heritage. He stressed that Greece seeks even better cooperation with Serbia in all sectors and is convinced that thanks to President Vučić's visit, the relations between the two countries will be even more beneficial and closer.
"We have significant mechanisms to further develop these relations," stressed President Pavlopulos, adding that this will be particularly underpinned by the planned signing of the Strategic Cooperation Declaration, as well as through the third meeting of the High Cooperation Council. 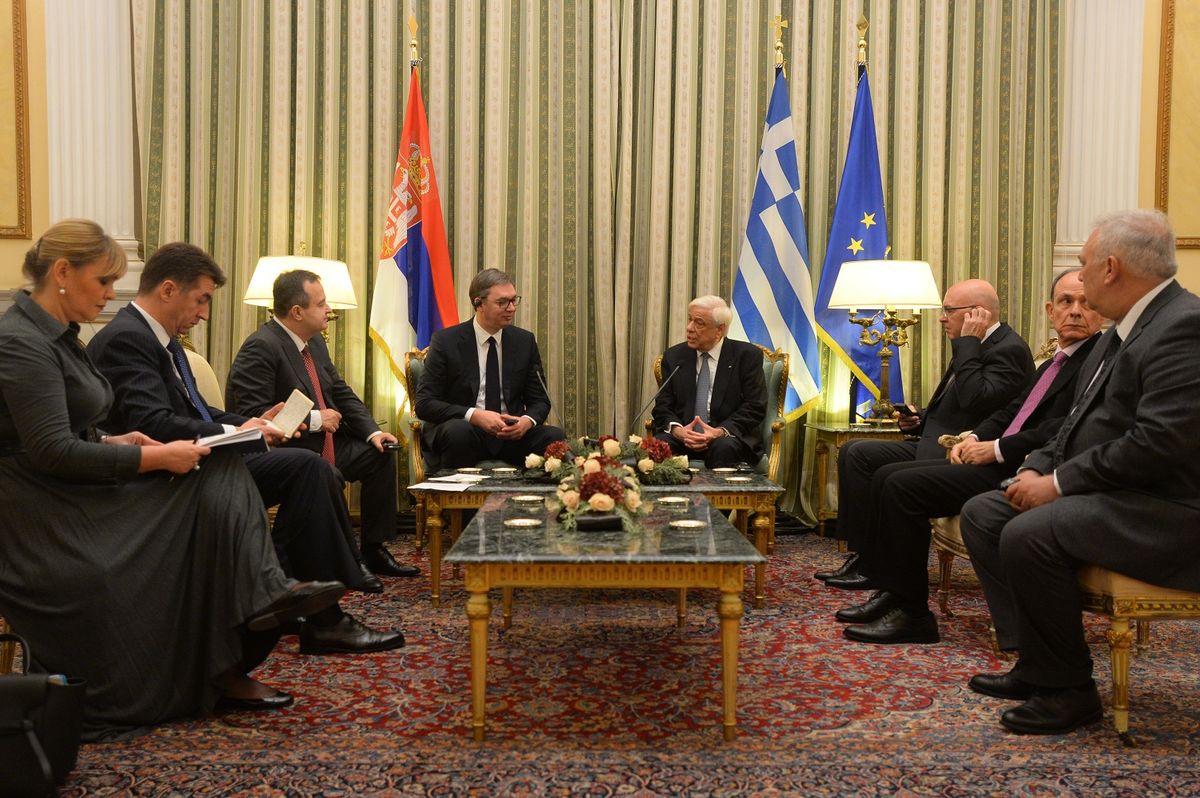 "The process of accession of your country to our European family is important. Your visit is a contribution to that. Greece has been a member of the EU for over 40 years. As for our region, Greece has a vision that all the countries in it can contribute to building a strong southeastern pillar, leaving conflicts and disagreements behind. We need to look towards the future. The ones who seek the membership must meet all the European standards, and Serbia is up to the task," said the Greek President at the beginning of the narrow format talks, which were followed by the plenary meeting of the two delegations. 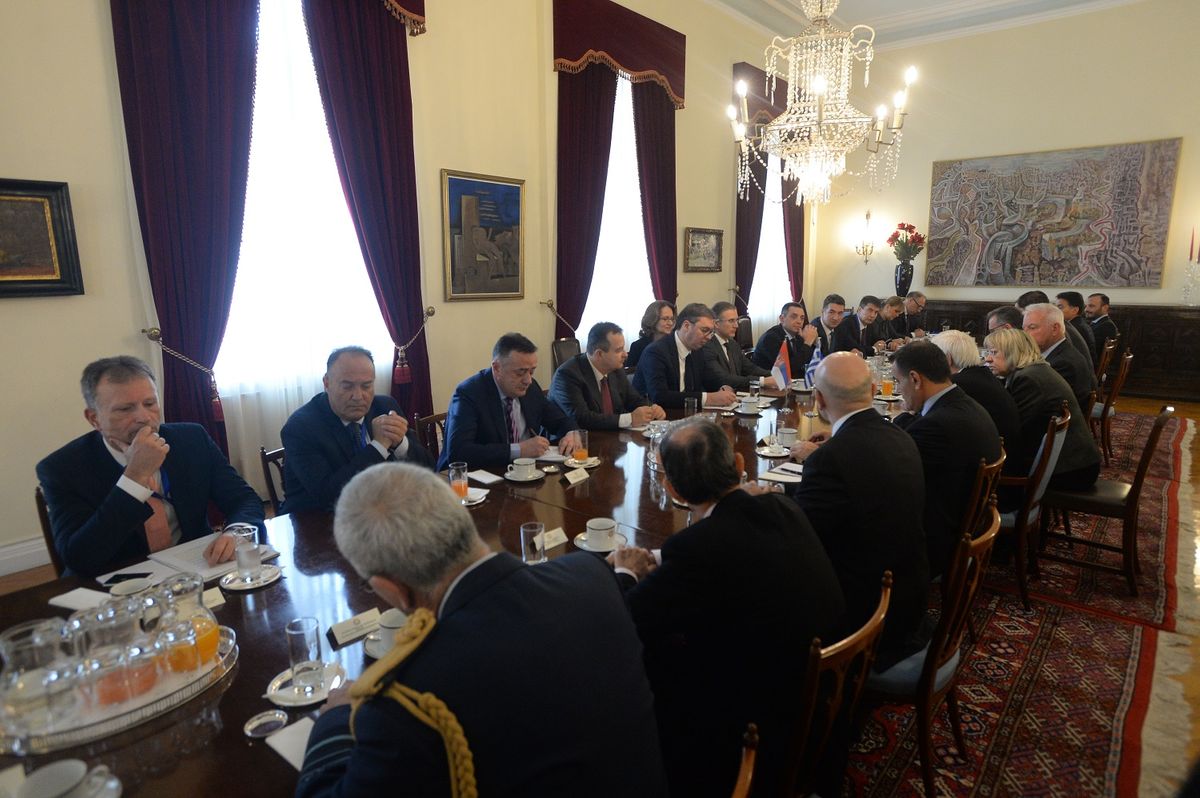 "Serbia and Greece have much more room for cooperation, bilateral relations and support in different organizations and institutions. Serbia will have significant support from Greece on its European path, and Greece can always count on the support of Serbia. This is an important moment because without the support of Greece and the countries in the region, we cannot succeed on our European path. We must all work together, get closer to each other in order to be respected by the great powers. In the future, the whole of Southeast Europe could be the engine of development and faster economic growth of the whole of Europe," said President Vučić after the meeting with the President of the Hellenic Republic, Prokopis Pavlopoulos.
President Vučić also met today with the Mayor of Athens Kostas Bakoyannis, who presented him with a Gold Medal for Merits of the City of Athens at a City Hall ceremony. 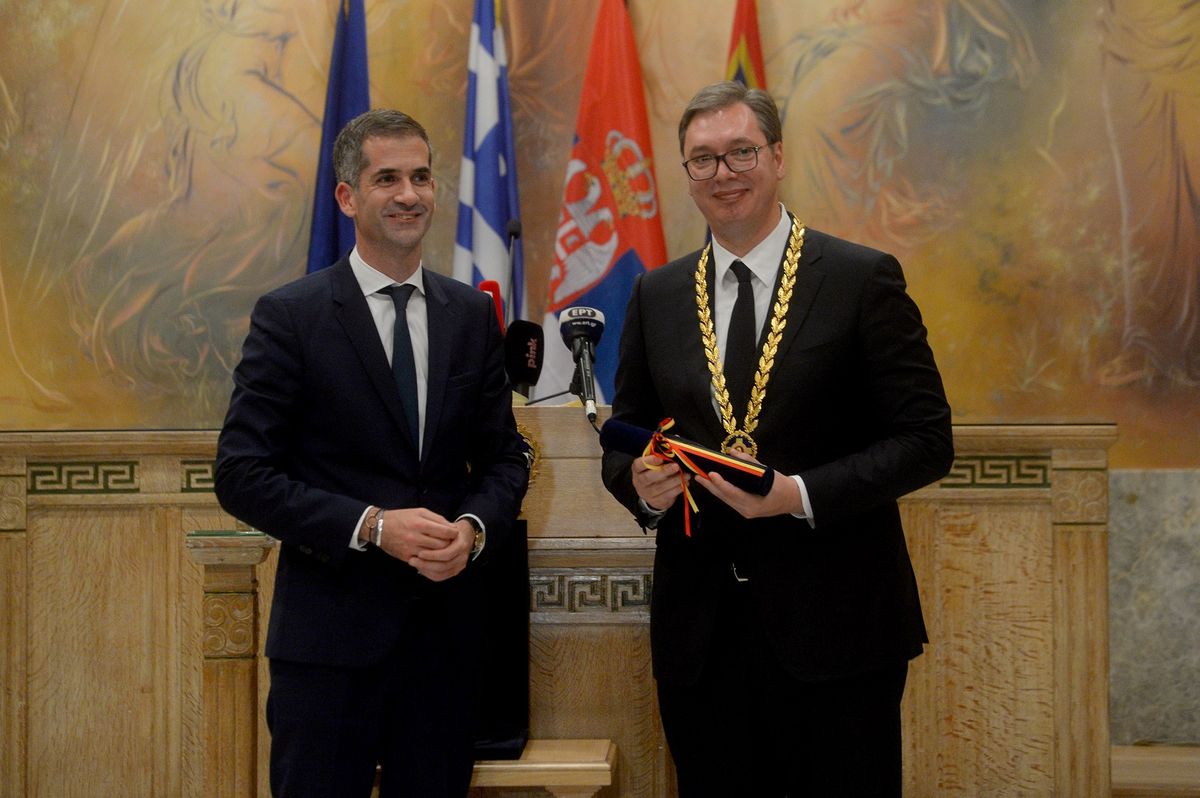 Mayor Bakoyannis pointed out that the Gold Medal is an acknowledgement for the contribution to the great friendship connecting the Serbian and Greek people, but also a sign of respect for President Vučić's personality, as he is an experienced politician who has repeatedly shown courage and changed the future of his country.
The Mayor of Athens referred to the Athens-Belgrade Friendship and Cooperation Agreement, which has been in effect for more than 50 years.
"Belgrade is a capital that the Greeks especially love not only because of its history but also because of its contemporary contribution to civilisation," Mayor Bakoyannis stressed. 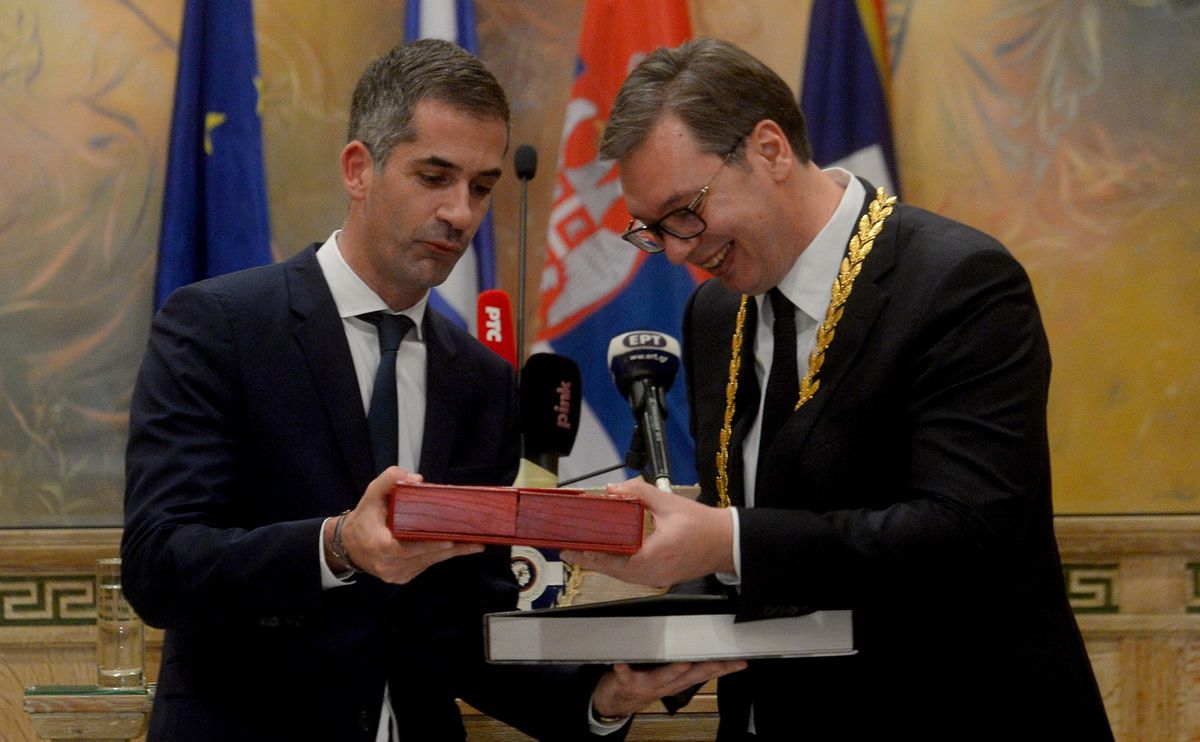 President Vučić said that the medal signifies a great honour for Serbia and for him personally, but also a tremendous obligation and an impetus to work on further development of the brotherly relations of the two countries and two peoples.
"Our peoples have been close ever since the Middle Ages and the Holy Mountain has been the gathering point of our cultures," said President Vučić, adding that there are streets in both Serbia and Greece named after the greats of the two peoples that speak of closeness and sincere friendship. He said that back in 1896 Serbian King Aleksandar Obrenović was the first sovereign to attend the opening of the modern Olympic Games in Athens and that in both Balkan wars, of 1912 and 1913, the two nations were the closest of allies. 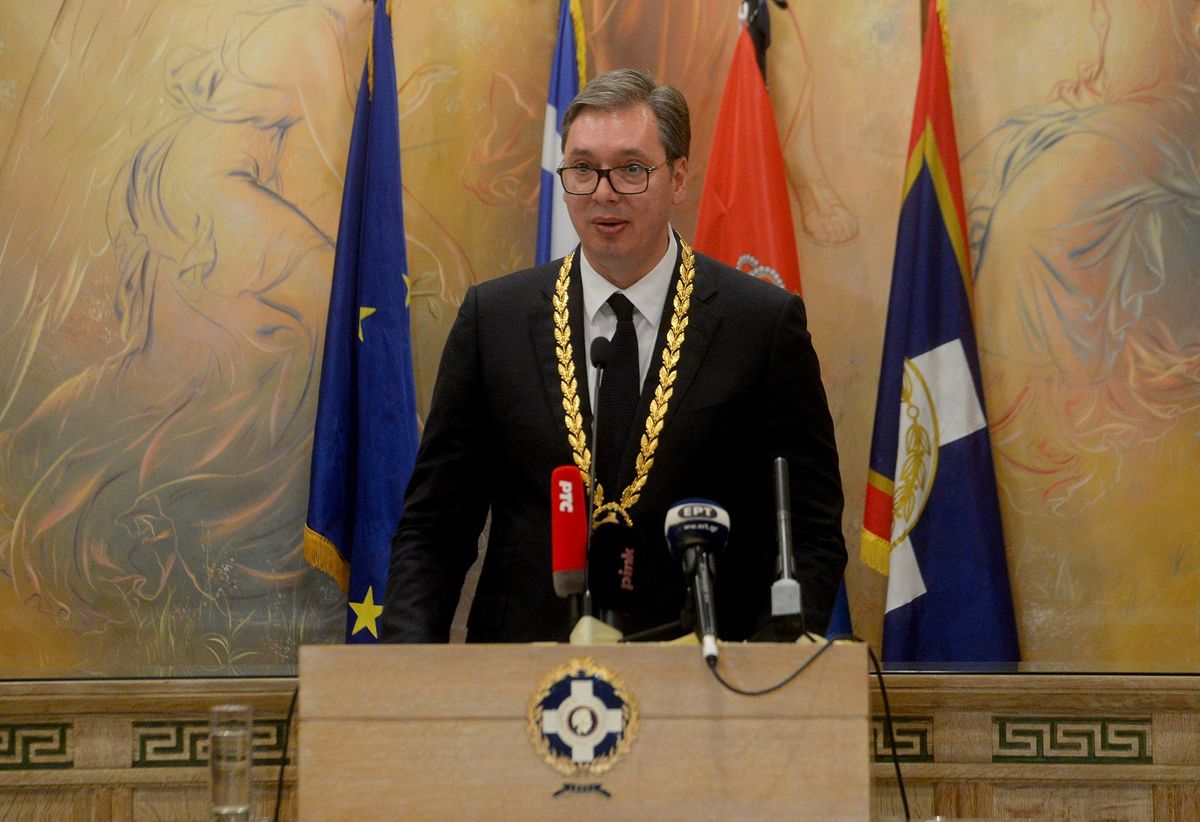 "In World War I, if it had not been for Greece and the Greeks, the Serbian state would have disappeared. When Venizelos was offered territorial concessions to the detriment of Serbia, he uttered the famous sentence: 'Greece is too small to be so sordid'. That is why he is one of the heroes of Serbia as well, not just a hero of Greece," said President Vučić, stating that Serbs and Greeks suffered equally during World War II when they were fighting fascism, while most of the surrounding nations submitted to the Central Powers.
President Vučić emphasised that Serbia will not forget that in 1999, although it was a NATO member, Greece was with the Serbian people and provided assistance and support as it could and was able to. He added that Greece is one of the five EU countries that did not recognise the independence of Kosovo and Metohija which Serbia is grateful for and that today, when Greece perceives any kind of threat in the Mediterranean, without regard to the good relations between Serbia and Turkey, the duty of Serbia is to say that it will always safeguard, protect and advocate for the preservation of the territorial integrity of Greece, on land and at sea.
"Serbia and Greece will stand together for better or worse, and I take this medal as an additional obligation for Serbia and for ourselves, to do everything we can to further develop our economic, cultural and overall relations," concluded President Vučić.
President Vučić and part of the Serbian delegation also met today with the prominent Greek businessmen. 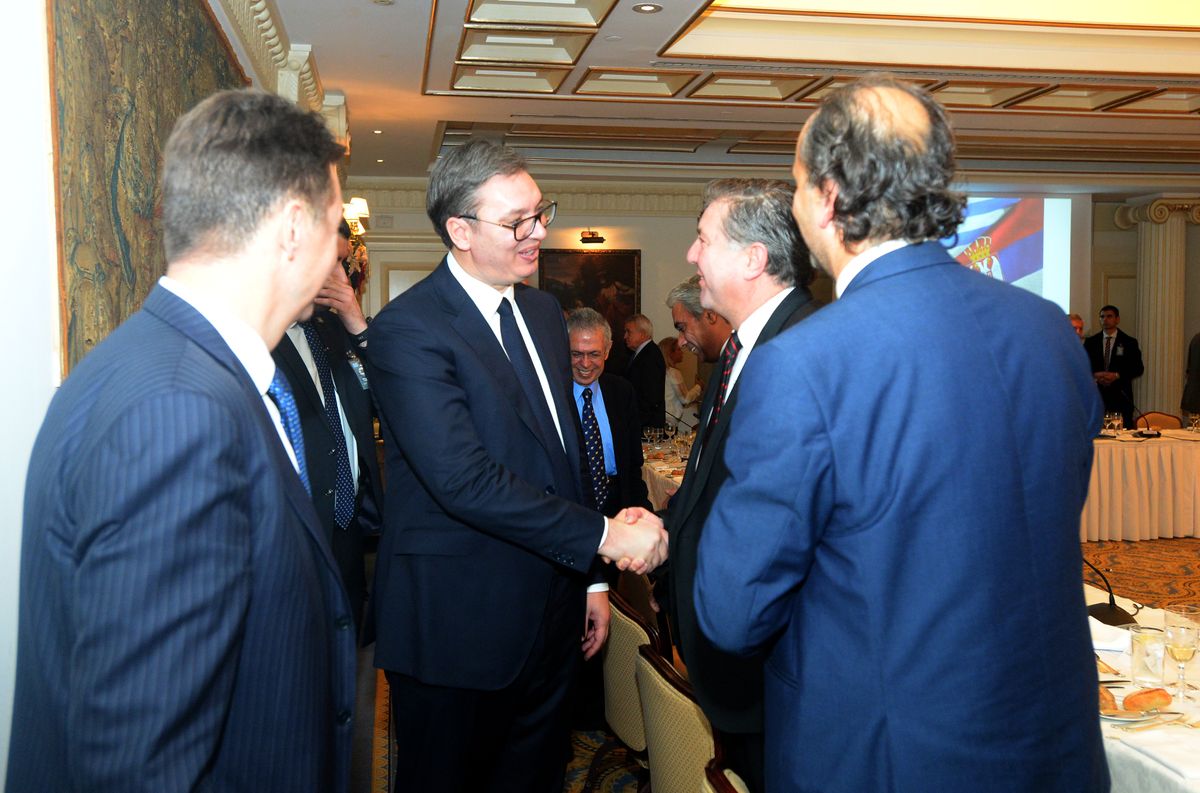 "Serbia will soon begin to build a high-speed railway line between Belgrade and Niš, which will be a part of an important railway corridor from Athens to Budapest," announced President Vučić, explaining that in the talks with Greek representatives he emphasised the necessity for a good railway connection with North Macedonia to Thessaloniki.
"Then we will build a railway line from Niš to Preševo designed for train speeds of 120 to 160 kilometres per hour. This will create a railway corridor not only for Serbia but also for Greece," said President Vučić and told Greek businessmen to invest in Serbia, noting that many European companies are coming to our country, especially German, which already employ about 62,000 people. 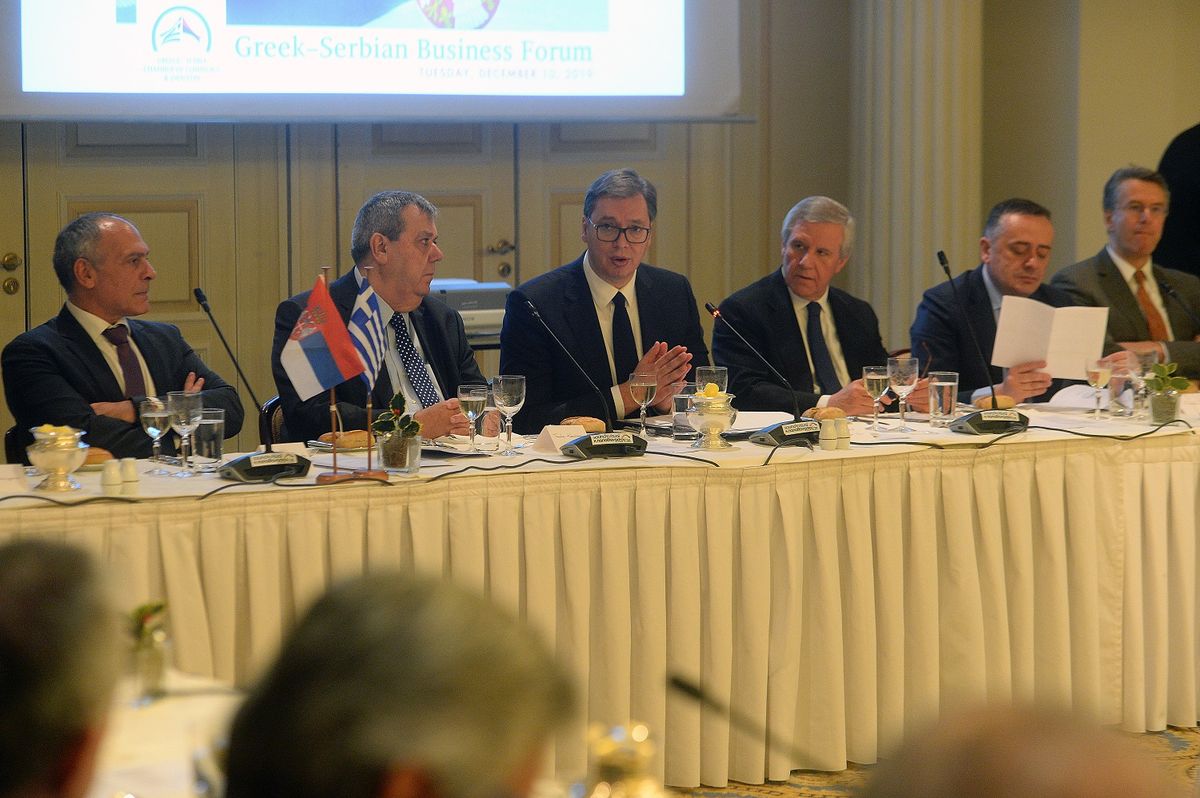 "We want to work with you. The doors of the Government of Serbia and the Serbian Development Agency are always open to you, but my office as well will always be open should you decide to invest in our country. You can count on our help," said President Vučić to the Greek businessmen and stressed that Serbia offers excellent conditions for investment and that it attracted 55 per cent of all investments in the Western Balkans. He presented the results of the Serbian economy and stated that Serbia's economic growth last year was 4.4 per cent and that this year it will reach at least 4,1 per cent.
President Vučić expressed hope that through today's talks with the businessmen, more Greek investors will be enabled to come to Serbia, as well as that the door for Serbian investors will be opened in Greece.
On the second day of his visit to Greece, President of the Republic of Serbia Aleksandar Vučić met with the Prime Minister of the Hellenic Republic Kyriakos Mitsotakis with whom he is tied through long-years of acquaintanceship, close personal and political relations. 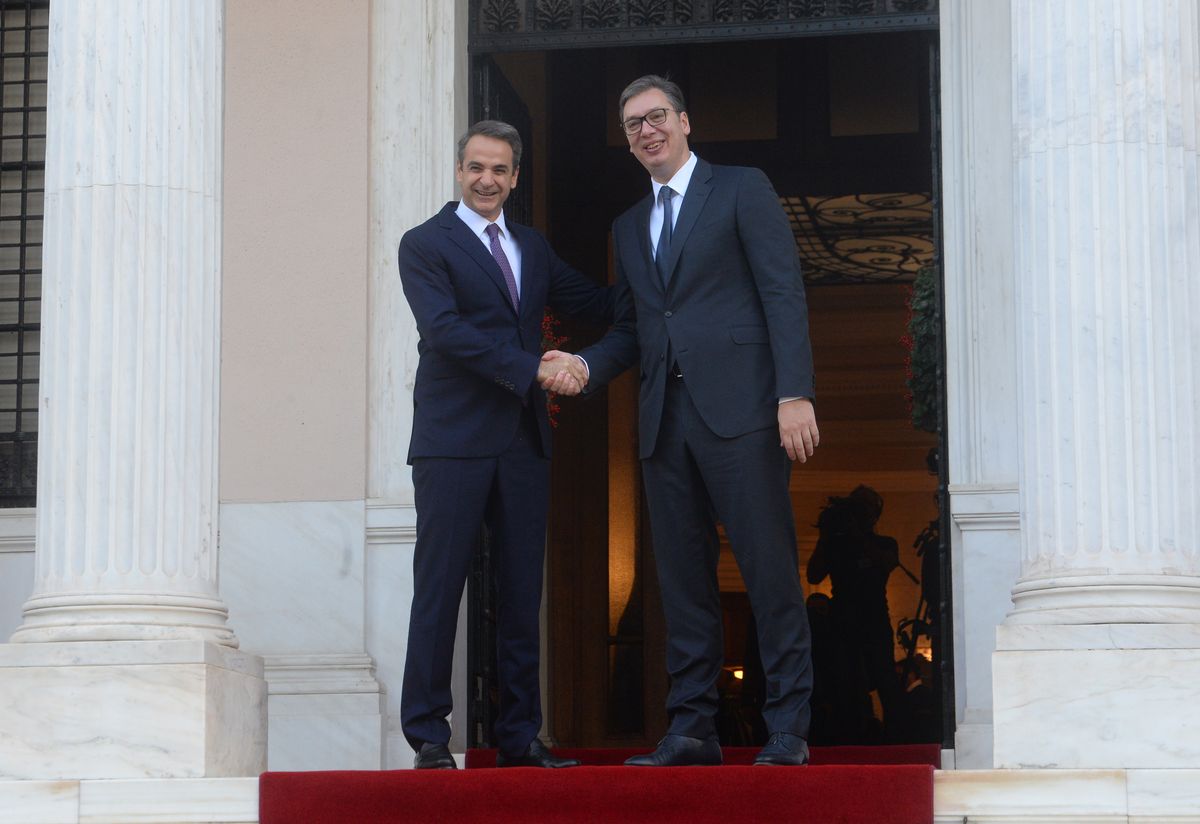 After the bilateral meeting, President of the Republic of Serbia Aleksandar Vučić and Prime Minister of Greece Kyriakos Mitsotakis signed the Joint Declaration on the establishment of strategic partnership between the two countries.
The Declaration implies a number of common positions on the most significant issues, mutual support on the most important matters for both countries, and a range of other general political positions regarding the friendly and strategic relations of the two countries. 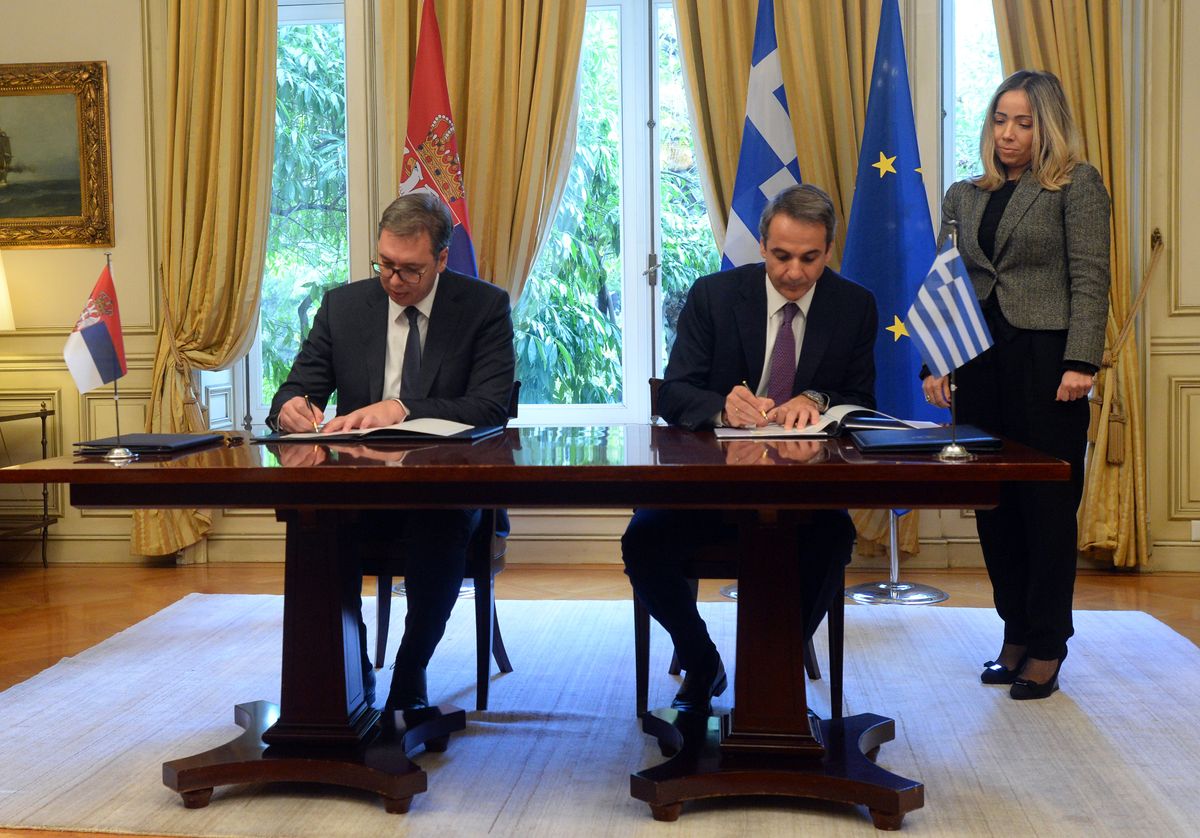 Speaking at the session of the High Council for Cooperation between Serbia and Greece which preceded the signing of the document, President Vučić emphasised that the Declaration is very important and that the Republic of Greece is only the third country in Europe with which Serbia signs such a document. In addition to the Declaration, Greek Foreign Minister Nikos Dendias and Serbian Minister of Education Mladen Šarčević signed the programme of cooperation between the two Governments in the fields of education, science and technological development for the period 2020 to 2022. 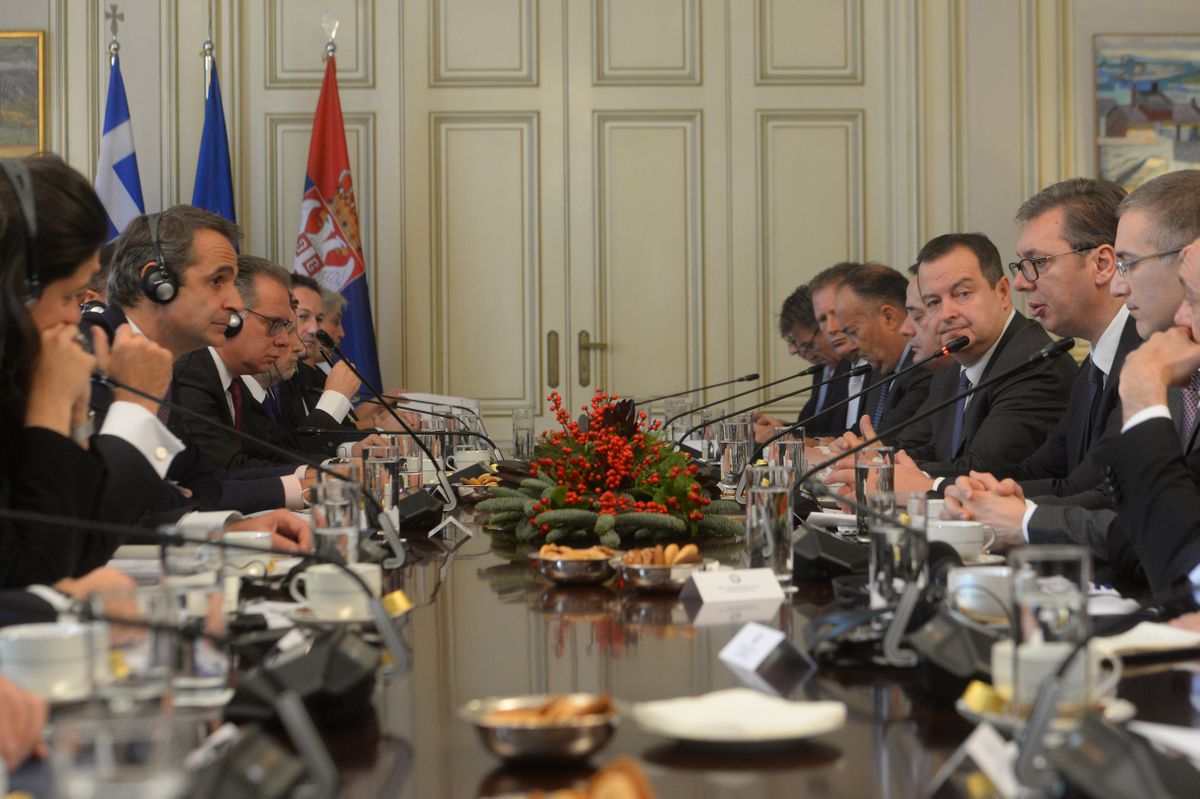 During his official visit to Athens, President Vučić also met with the Archbishop of Athens and All Greece, the head of the Greek Orthodox Church, Ieronymos II. After the meeting - as the President said - he is returning back home with more optimism regarding the unity in the Orthodox world, convinced that all differences can be overcome by dialogue and conversation.
President Vučić bestowed to the Archbishop the icon of Saint Sava, which, with the blessing of the Patriarch of Serbia Irinej, was crafted on the occasion of 800 years of autocephaly of the Serbian Orthodox Church, while Archbishop Ieronymos II presented to the President of Serbia the icon of the Apostle Paul, a symbol of the Greek Orthodox Church.
The President of Serbia thanked the Greek Partiararch for the gift, wonderful words and warm welcome and said that Serbia will always stand "side by side" with the fraternal Greek people.
He wished the Greek people, the Greek Orthodox Church and the Greek Patriarch a lot of success, happiness, health and joy to realise whatever they wanted because it will be, as he said, the realisation of our wishes and dreams as well. 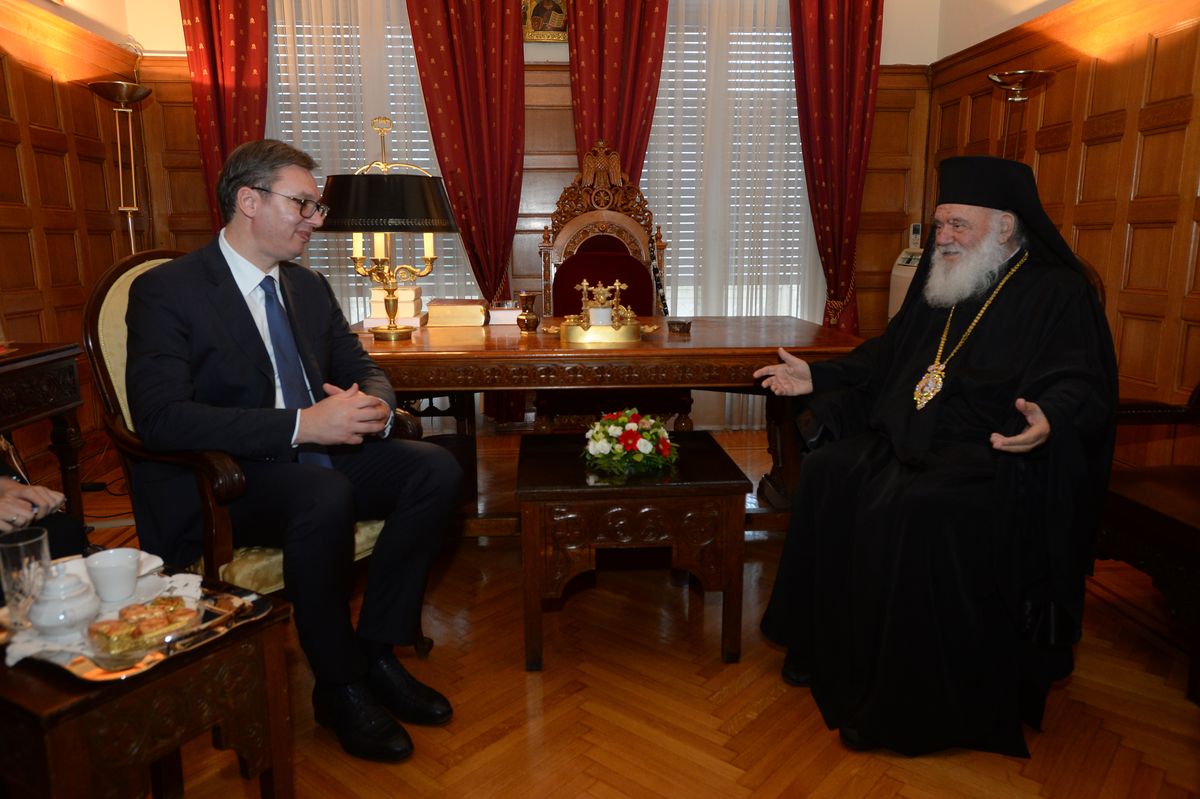 The Greek Patriarch replied by saying that they welcome President Vučić in the Holy Archdiocese of Athens with feelings of deep respect, friendship and love, with the joy that he is visiting the church founded by the Apostle Paul.
"We extend through you our heartfelt greetings to the Serbian people with whom we walk side by side in the unbreakable friendship," said the head of the Greek Church.
President Vučić ended his official two-day visit to Athens with a meeting with the President of the Coalition of the Radical Left (SYRIZA), Alexis Tsipras, with whom he used to cooperate while Tsipras was still at the helm of the Greek government and within the framework of regional cooperation between Serbia, Romania, Bulgaria and Greece.
Share