Public Address of the President of the Republic of Serbia

President of the Republic of Serbia Aleksandar Vučić emphasised earlier today, in the aftermath of Ramush Haradinaj’s resignation, that Serbia has to react to it with calm, responsibly, composedly and without euphoria, and added that continuation of the dialogue remains vital for the preservation of peace and stabilisation of relations between Belgrade and Priština.

„We do understand both the expectations and the need of our people for satisfaction of justice, of our people who suffered the stigma of the culprits and the only ones responsible for everything that was going on across former Yugoslavia. That is why we do understand the joy, but also some kind of satisfaction in our people following the summons of Haradinaj to the hearing, and the fact he is suspected for war crimes", said President Vučić in his address to the public.
President Vučić said there are no reasons for joy and euphoria, not because we think positively about Haradinaj, but because of the consequences following such an act, and primarily considering how the Albanians and the international community will relate towards the Serbian people and Serbia. The President pointed out that the position of Serbs and everyday life will become even more difficult.
"There is a further homogenisation of Albanians, further extremisation of their standpoints and even stronger unhidden resentment towards the Serbian people in the Serbian state which they see as the only culprit for all their strains, and for what is happening to Haradinaj”, said President Vučić.
President Vučić stressed out that in the coming period the Republic of Serbia will devote even more attention to the perseverance and life and safety of the Serbian people in Kosovo and Metohija, and conveyed his message that our people in Kosovo and Metohija can count on its state and on its Serbia.
President Vučić, however, emphasized that the political situation goes in the direction of further delay in the dialogue between Belgrade and Priština.
"Resignation of Ramush Haradinaj is a political trick that can gain him even higher popularity and that can swipe off his political opponents which will lead to even higher extremism. Thus Haradinaj becomes a hero fighting for a united and concerted Kosovo, while the others remain unworthy of such a leader who is taking them to a bright future", said President Vučić. 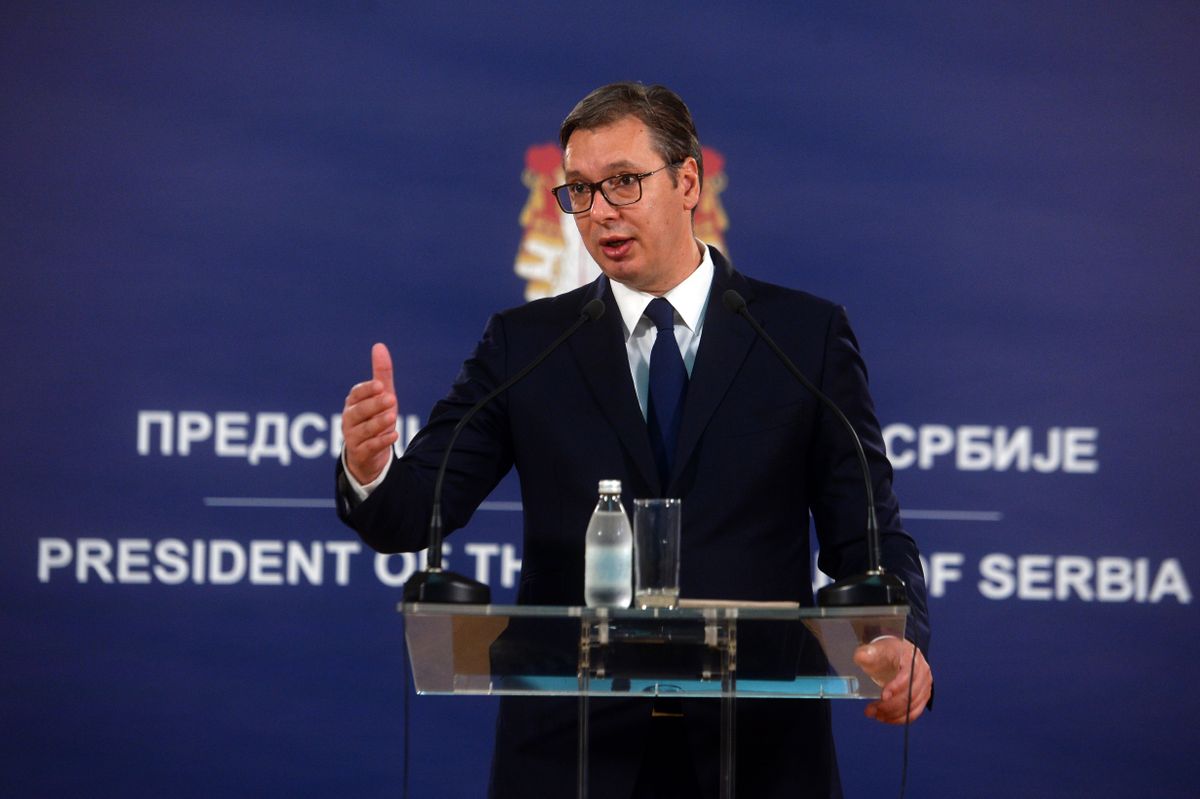 President Vučić pointed out that at the same time we face the silence from the international community concerning the crimes committed against Serbs and non-Albanian population, and especially against the Roma people.
President Vučić expressed his belief that Ramush Haradinaj will go to the Hague next week, but that he will be immediately released, and that he will return to Kosovo to see his popularity doubled. The President is also convinced that at the same time the pressure against Serbia will increase.
"We anticipate that Haradinaj will go to the Hague next week, that he will be released immediately, after 48 hours. He will return as a great hero of the Albanian population in Kosovo and Metohija. His popularity will double”, explained President Vučić in his address to the public.
President Vučić said that the ones who would try to find other Prime Minister nominees will face the fact that it will be impossible without Haradinaj due to the delegitimacy of other politicians.
"Haradinaj, and I am not sure he is the only one, seeks a convincing victory of the hardest Albanian option in the elections which will be held at the end of September or in October”, added President Vučić.
"At the same time, it is clear that the main objective will be to constitute a majority without the Serbian List and to that end, they will use some constituents of our people. It will be a great Albanian unification within Kosovo, but also with Tirana”, President Vučić is convinced.
President Vučić indicated that it will be impossible to maintain a dialogue during the electoral activities and that in the same period the taxes that generated the dreadful situation in our relations will certainly not be abolished.
"Their plan and idea is to wait for the elections where Ramush Haradinaj will rise much stronger. There is no room there for Serbs and for the dialogue likewise", emphasized President Vučić.
President Vučić added that following the elections, the government will be formed only in November, and soon after that the campaign will launch in Serbia as the elections are due in March.
"It is clear there is no dialogue there. We have to be prepared that there will be no substantial changes unless someone in the international community acts a bit more responsibly and exerts pressure on Priština”, emphasized President Vučić.
President Vučić said that in the course of the next two or three months the increase of pressure on Serbia may be expected in all aspects, especially during September, and that the pressures will be steered towards the recognition of Kosovo.
President Vučić added that Serbia will insist on the abolishment of taxes and that already in August it will start working on the economic unification of the Balkan countries.
"It is the only chance for economic progress and we thereby protect our interests”, said the President.
President Vučić announced that he will have talks with several Western Balkans leaders regarding the unification of the Balkan region in the economic sense, and added that many Balkan countries understand that.
"I know that Svetozar Marković and King Aleksandar paid the price for striving towards the idea of the Balkan peoples and for seeking their approximation, and I see no other exit from the heavy conflicts during the last decades”, emphasised President Vučić.
President Vučić said that we must solve the problems by ourselves and that none else will be able to do it. He added that we want to talk to Albanians and that only as economically more potent we can post our demands and seek our way through to the European Union.
"Serbia is proud of the fact to be a sovereign country, we seek cooperation with great powers, but we do not want a tutor, we want to maintain our own standpoint based on the interests of Serbia and not the standpoint of foreign embassies", said the President.
President Vučić also added that it is not our job to protect the interests of the great powers but the interests of our people and said that Serbia will observe the situation in Priština and it will not interfere in their internal political scene.
"We will keep helping our people to be safe and secure", said President Vučić.
Share