Session of the state leadership and the Operational Team for VaccinationPresident of Serbia Aleksandar Vučić and the Prime Minister of the Republic of Serbia Ana Brnabić presented today the most modern system for registration, scheduling and monitoring of vaccines immunisation of the Serbian citizens, which observes the entire process from vaccine procurement to vaccination. At the beginning of the state leadership session with the Operational Team for Immunisation, President Vučić announced that Serbian citizens' mass vaccination with the Chinese vaccine would begin today. 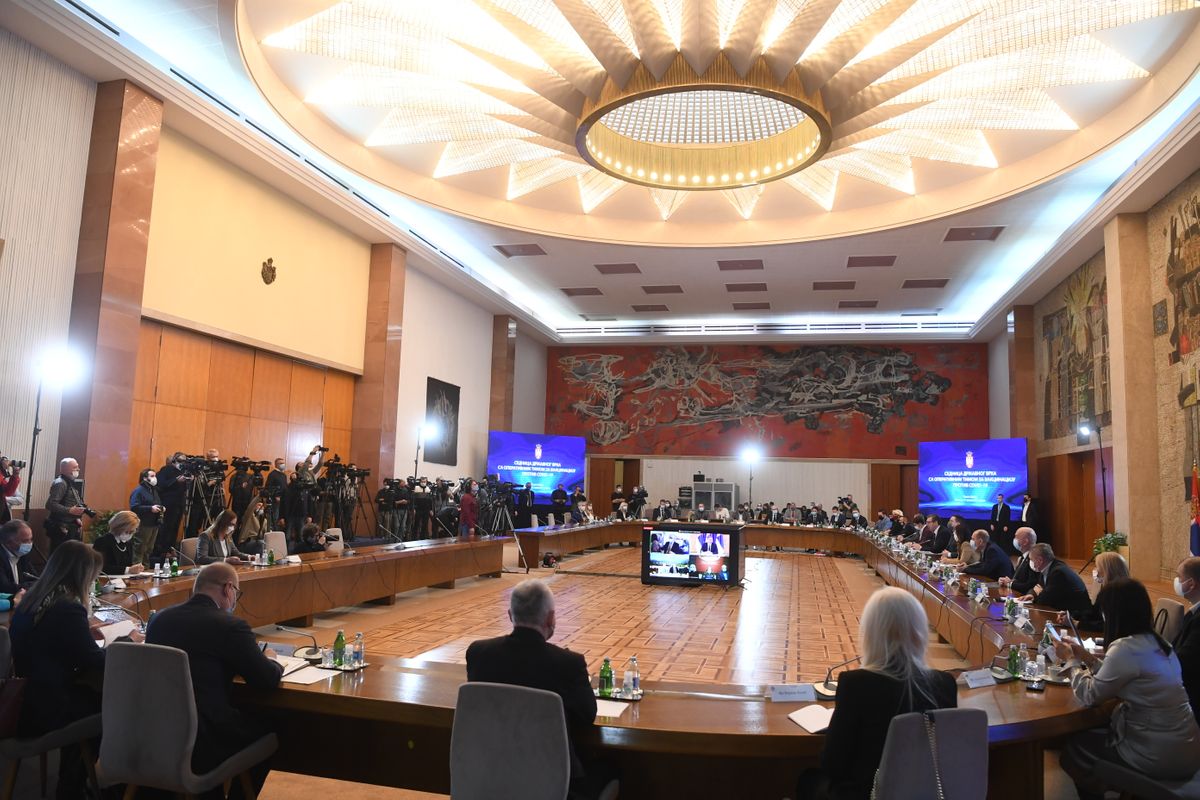 President Aleksandar Vučić said that vaccination is of crucial importance for Serbia because without it we will never defeat the coronavirus, not only in terms of health but also in the economic aspect where we would "bring the country to the brink".
"Today we need to make decisions and act accordingly in the coming period, to fight for the future of Serbia and the future of the citizens of Serbia," said President Vučić and thanked everyone in the health system, who do their best to help citizens and country to fight this vicious disease.
"Thank you to pensioners who endured a lot and who were most exposed to the impact of this disease, but also to the young people, to whom we made life more difficult with all the decisions made. But we were forced to protect the lives of the elderly," the President said.
President Vučić noted that Serbia was among those countries - of which there were not a large number - which participated in the donor conference for the development of vaccines within the EU.
"Serbia has donated two million euros for vaccines. It seems that we have largely participated in supporting the development of a cure for overcoming the crisis. We were the first from the region to pay money for the Covax programme, a specialised programme within the EU, through which we should receive significant quantities of vaccines from the Union, which we have not yet received," said the President, expressing confidence that Brussels will understand the need of us in the Western Balkans and that we will soon be able to count on those vaccines as well. 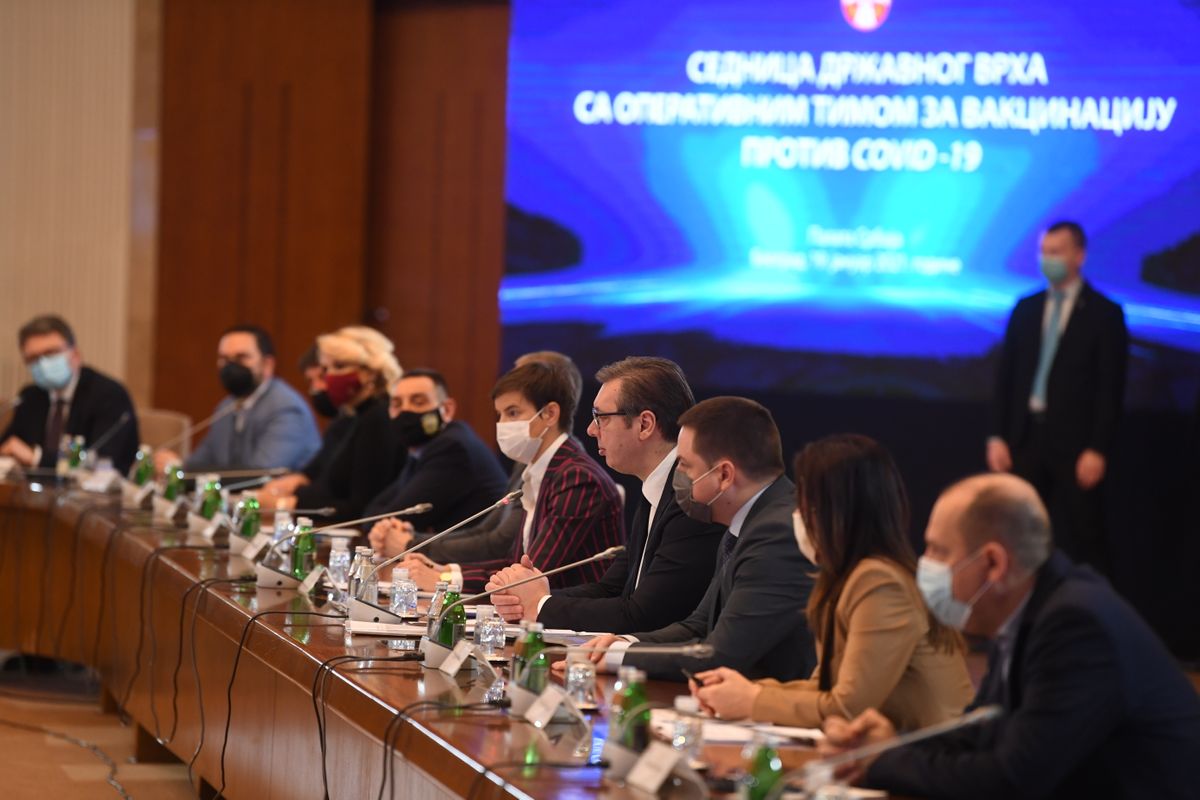 The President announced that today or tomorrow we should receive 250,000 of 'sputnik V' vaccines and that Serbia will sign a trilateral agreement with Poland and Astra Zeneca for about 800,000 vaccines.
President Vučić appealed for vaccination to be done as soon as possible so that the economy could work faster and so that we could continue to raise the country. He called on the ministries, primarily the ministers of education, defence, internal affairs and health, to vaccinate the employees from their relevant sectors.
At today's state leadership meeting, the most advanced system for registration, scheduling and monitoring of vaccines and immunisation of the Serbian population was presented. President Vučić said this is the state-of-the-art information system and that through it we know for everyone who is vaccinated which vaccine is received, and when and where the person was vaccinated. The President added that the situation with the seasonal flu vaccine would no longer happen, as it was previously unknown how many vaccines there were, and that there was a small number of vaccinated because there was no vaccination campaign.
He pointed out that the new e-vaccine system is in the range of electronic systems of the most developed countries in the world, and that it is yet another proof that our health system is improving, but also one more way in which our the state keeps pace with the most developed countries, after the construction of Covid hospitals in Batajnica and Kruševac. 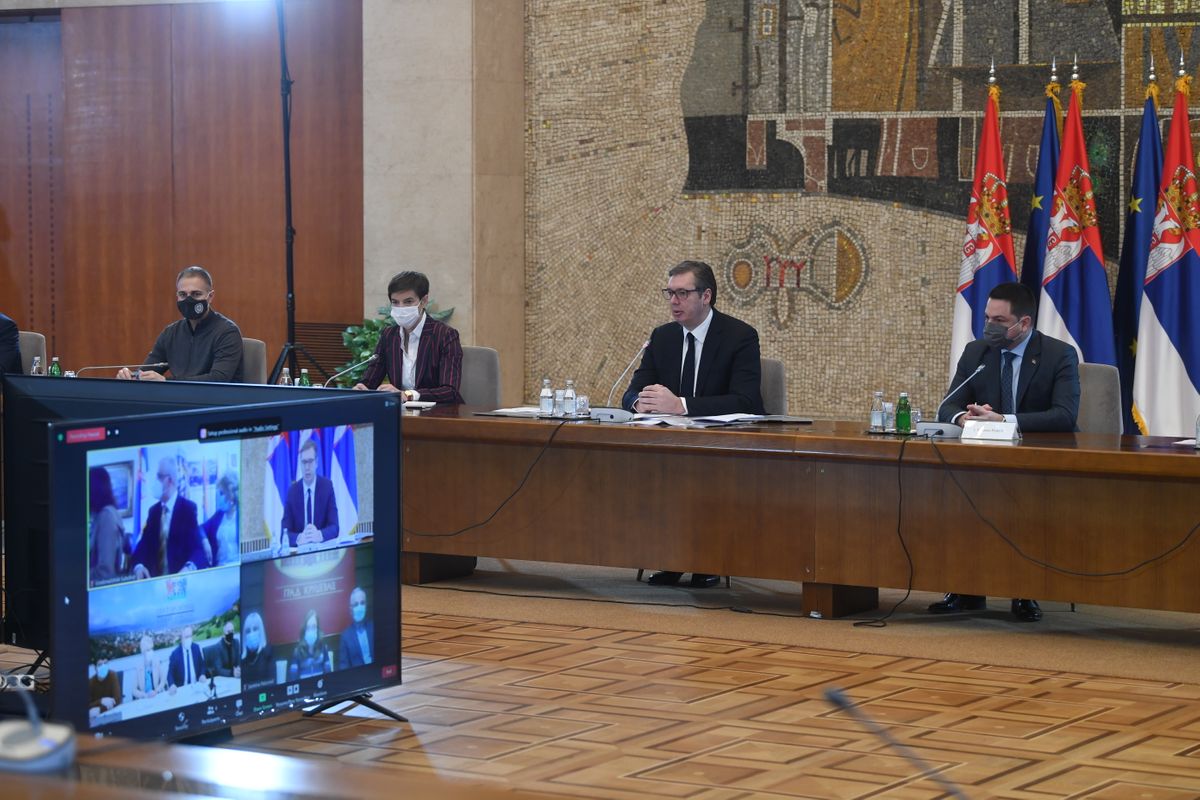 Prime Minister Brnabić said that we are starting a mass vaccination today, and that the first large point for that is being opened at the Fair, and that a total of 1,054,950 vaccines have arrived in Serbia so far.
She pointed out that the biggest challenge for everyone in Europe now is how to manage the vaccine administration now and get the population vaccinated as soon as possible.
"We are doing this systematically," Prime Minister Brnabić emphasised and added that vaccines arrive in two central warehouses in Serbia, one in Torlak and the other in the RHIF Farmalogist warehouse.
Prime Minister Brnabić added that the system for citizens' registration was put into operation and called on all citizens to register through the e-Government and by phone since the contact centre was opened. She emphasised that this system provides the basis for e-Health development, which is one of this government's priorities - digitalisation of the health system.
The meeting in the Palace of Serbia was also attended by Ministers Zlatibor Lončar, Nebojša Stefanović, Aleksandar Vulin, Darija Kisić Tepavčević, Marija Obradovic, Nenad Popović and Branko Ružić, the director of the Infectious Diseases Clinic Goran Stevanović and the mayors of the largest cities.
Share